Shining Girls (Season 1), Episodes 1, 2 & 3 Recap and Ending Explained: Elizabeth Moss has always been impressive in her acting endeavors. From her brilliant performance in Mad Men to playing the lead in the dystopian The Handmaid’s Tale, she has a great body of work that makes her one of the finest dramatic actors in the recent past. With ‘Shining Girls’, she blesses the screen with the portrayal of a person perplexed with the reality in front of her. Her character is completely at odds with her situation, conflicted with the thoughts that put her in a hazy state. The show, created by Silka Luisa, is based on Lauren Beukes’s novel of the same name.

Within the first three episodes that have premiered on Apple TV+ this weekend, she has certainly been the highlight of the show. She pulls you into the confounding narrative that makes you invested in the stakes in her character’s journey. Besides her, Wagner Moura, Phillipa Soo, and Jamie Bell help with their share of performances to build the suspense of the drama. It is difficult to talk about the show without talking about the show since so much of the narration is focused on unpeeling the story piece by piece and opening up the viewers to a set of new revelations. I will rather keep that part reserved for the further sections of the article where I speak about the storyline and the significance of its ending. Before reading any further, make sure that you’ve seen these three episodes.

The episode starts with a young girl sitting on the stairs of a house when a passerby strikes a conversation with her. This mysterious man leaves a toy with her against her wish and walks away. Then we see the same girl, now older, (Kirby, played by Elizabeth Moss) living with her mother, noting down details about her daily life, and harboring a plan to move to Florida. We see her going to her workplace – Chicago Sun-times. While she is working on a not-so-important job at this news publication, we meet Dan (played by Wagner Moura) who is working as a reporter. He is following a recent criminal case for his next story where he comes across Kirby who shows interest in the pursuit of finding the culprit. He thinks that she is doing it just to raise her level of job profile, but she reveals how the girl assaulted in the case (Julia) has similar marks as hers (from the time when she was brutally attacked) and that makes her want to pursue it. After this conversation, they start investigating the case together.

To confirm the details about her marks (to make his story more fact-driven), Dan takes Kirby to a medical examiner. While she starts examining marks on the body, Kirby suddenly realizes the examiner is not a woman but a man. This becomes the second instance from the episode that shows Kirby’s disorientation. Through the examination, we get to know that her claim about the marks is indeed true. While we follow this investigation on one side, we also meet Jin-Sook (played by Phillipa Soo) who works at the local planetarium. She gets a visit from Harper (the mysterious guy who meets the young girl, who looks hardly aged). There are a few links in their encounters that connect Kirby’s case with hers. Towards the end of the episode, we see Jin-Sook getting strangled by him. The scene intercuts to Kirby, going back to her building and knocking on the wrong apartment door. Within a few moments, she goes into the place where she actually stays and we get to know that she lives with her colleague, Marcus. 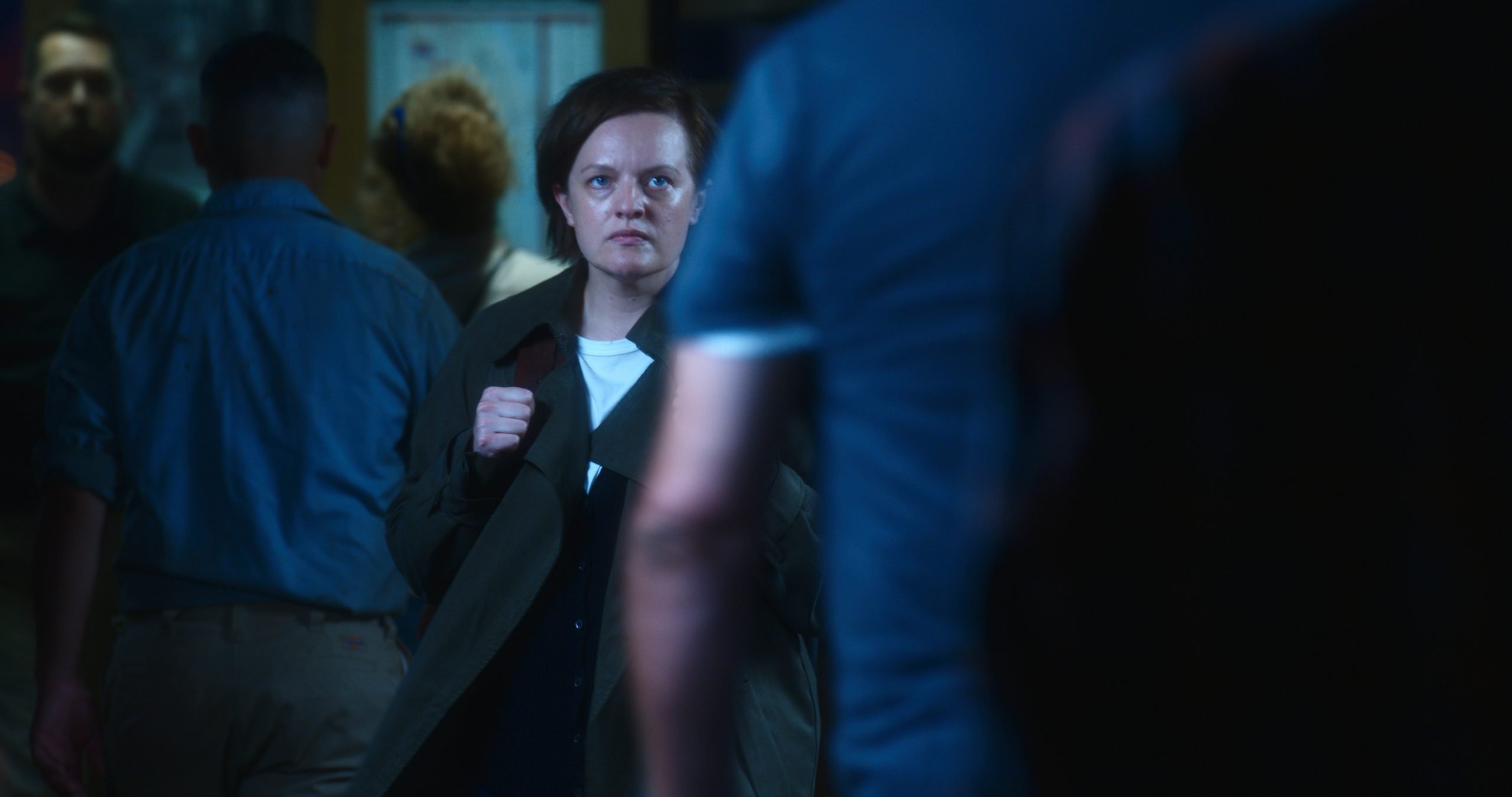 In the next episode, we find out that Marcus and Kirby are married and that she does not live with her mother. On the investigation side, we see that Kirby tells Dan about how the killer left something in her body, and if the same has happened to Julia, there the killer may be the same. Dan goes to the crematorium and finds truth in her belief. Kirby wishes to be an anonymous source for this case. Meanwhile, he learns that this is not her actual name, which makes him question the viability of her claims. As a result, he confronts her about the name (Sharon Leads) change and gets to know the reason. They get on the same page and start investigating again. When both of them go to Julia’s house, Kirby finds a tape recording that reaffirms her notions that their killer is the same. Meanwhile, Dan comes across Harper, who appears to be an interested passerby. In the end, we see Harper sleeping on his bed with a greenish-tinted outline on his side.

The next episode shows Dan unconscious inside a metro, with blood dripping down his hand. We see him trying to make sense of his present situation and then going back to his house. After returning home, he speaks with his son while walking past his books. He sees them rearranged and finds it odd. Still, he just puts them back into the actual place and goes on with his routine as if everything’s normal. Meanwhile, we see Kirby going through several computer files in the office and finding leads for the investigation. She collects several cases that were not closed. Abby meets her and speaks to her about Dan’s drinking issues and to be beware of the same. While Kirby confronts Dan about it, he tells her not to believe in everything that Abby tells her about him.

Later, they proceed with the investigation while going through the physical pieces of evidence of non-closed cases, that had similarities with her and Julia’s cases. While Kirby makes a case to Dan with the help of connections, Dan says that they wouldn’t help since these are the police records that they were not supposed to have. However, it starts off their investigation in the right direction. During that time, he finds her notebook and asks her about it, where she reveals her mental condition. After this discussion, when they are not at home, Harper gets inside the house and finds the evidence that they were looking at. He quickly leaves the place.  Meanwhile, Kirby follows a lead and goes to the local planetarium where she finds out that the person she is looking for, still works there. Jin-Sook (from the 1st episode) meets her while heading out and Kirby shows her the photo of the keys she brought with her (the one that belonged to Jin-Sook). Then she mentions the names of other victims and asks if she knows either of them. Being confused by the weird queries, Jin-Sook walks off.

Through the intercuts, we find Dan confronted by Marcus for leading his wife (Kirby) along with him on a case with no guaranteed outcome. He looks distraught because of this. Later, we find him in a bar, getting drunk and intoxicated while Harper looks at him from a distance. Afterward, when he is trying to get on a metro, Harper follows him and tries to make him talk about Julia’s case. Dan wonders why he is interested and Harper shares a sentimental, personal reason for him disclosing the information. When the train arrives, Dan gets on the metro. Since he looks just as disoriented with blood on his hands, this may have been in connection to the beginning of this episode (and the beginning possibly occurred right after this incident).

We become aware that Shining Girls is a mystery thriller that follows the journey of its characters in the form of an investigative drama. The character in focus – Kirby, feels lost in the world around her, and her dissociation gets reflected in the style of narration that oftentimes becomes difficult to make heads and tails of the presented scenarios. Since we meet the culprit from the get-go, we follow a chain of suspense (as explained by Alfred Hitchcock in his Bomb-related example) and the questions remain in the form of ‘how’ and ‘why’ of the brutal attacks.

While the story does make you sense a narrative related to time travel, those pieces of time-jumps are not explicitly explained or explored beyond a few occurrences hinting at it. These bits blend seamlessly with the story and make the entirety of the three episodes a guessing game about the reality presented in front of us. While we get impressed with ‘how’ the story is told, ‘what’ is being told is just as impressive. We find women’s cases going unanswered and such cases maligning their reputation to the point they have to let go of their careers and dream pursuits. That makes the narrative relevant despite it being set in a time before us.