“Even a peaceful landscape, even a meadow in the harvest with flights of crows and grass fires, even a road for cars and peasants and couples, even a resort village with marketplace and steeple, can lead to a concentration camp.” Alain Resnais’ Night and Fog opened with this monologue in the background focusing on the present-day witnesses of the most horrific incident in world history, the abandoned grounds of the concentration camps. The film goes forward by describing the heinous situations of the prisoners during the Holocaust and the unmentionable tortures they had to endure during their time of imprisonment through both verbal narration and rolling archival footage.

Outside a fictional tale, a documentary has to offer an objective look into its subject matter with a sense of immediacy. But if we keep that aside for a moment and focus on the argument of French film critic Jean Mitry, it can be seen otherwise. Mitry argues that in movies, what the camera reveals is not the reality in itself but a new appearance correlated to the world of things. One may call this camera perception which, irrespective of the will of the cameraman, produces a specific ‘segregation of space.’ Thus a reconstruction of the real happens, and anything can’t be considered ‘objective and immediate’ irrespective of fiction or documentary. So, in this case, to deal with this kind of subject of deep and broad historical context, there is always a possibility of manipulating the audience from the actuality.

But for Night and Fog, Resnais bypassed Mitry’s argument as he did not bother to reconstruct it. Rather his use of archival footage objectifies the already constructed notion of past horrors and acts as a reminiscing tool for the abandoned fields of the concentration camps as his camera captured them in the present. These present-day shots of the abandoned fields become a reminder that they witnessed the wounds, cries, and torment and yet survived them to move forward, making us think and question how we feel. 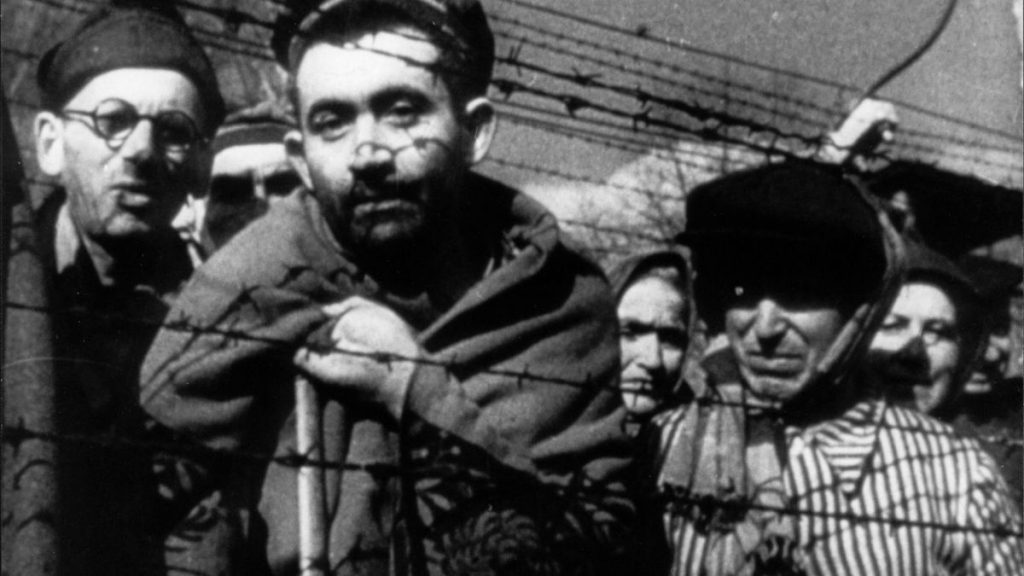 In one shot, the camera tracks the railway tracks for a brief moment before it tilts upward to focus on the main entrance of a concentration camp. It gives a sense as a spectator that Resnais wants us to put the shoes of the people who were once taken in this same manner, if for a brief moment. Resnais constantly does this trick throughout the film. He juxtaposes the past with the present as they are retracing each other. And with that, the past and present come together on board at the same time. As I mentioned earlier, Night and Fog make us think about how we feel or what our stand on this whole thing; Resnais made sure that we don’t get manipulated by any exploitation to believe in a certain way. His trick to bringing the present with reminiscing the past hasn’t given the time for that. It is treated in a way that we roam around the concentration camps as mere tourists, and the ghosts of the prisoners act as guides to tell the stories of how they were tortured, tormented, or killed. Thus the reconstruction of reality in Mitry’s words becomes psychological on the end of the spectators.

But, by bringing the past and the present on board simultaneously, Resnais did not stop there. Instead, he added another element – the future. At the end of the film, the narration goes, “Who among us keeps from this strange watchtower to warn of the arrival of the new executioners? Are their faces really so different from ours? Somewhere among us, there are still lucky Kapos, reinstated officers, and anonymous informers. There are those who refused or to believe only now and then.” It goes as it tells us; it is not the end. Holocaust is not the end. There are demons out among us who will constantly try to destroy humanity.

In the last shot, the camera pans through a wrecked building and stands still there as it is warning us about the impending danger of the future. At the time of the film’s release in 1956, the warning did not go in vain. Vietnam, Iraq, Bosnia and recent times Ukraine are the few names that can be mentioned in that context.

Michael Haneke once commented that Night and Fog is the only film about the Holocaust that reminds him of the responsibility of a filmmaker. It is a noble and necessary work of art that captures the real gravitas of the horrific past and intermits with the present to tell a cautionary tale for the future. And over a half-century later, it remains at the top in representing history and cinema appropriately.

Night and Fog and Schindler’s List: A Comparative Analysis

On "Vertigo" and the Obsession for Control of Total Reality