It’s difficult to point out the exact moment when Indian comedies became unrelatable. For example, around a decade ago, we got Filmistaan (2012), Jolly LLB (2013), Fukrey (2013), and Piku (2015). And then it was all about leaving your brain behind because Rohit Shetty or Luv Ranjan told you to do so. Or worse, you were made to believe that you were watching “small town” stories which peddled regression for 90 per cent of its runtime in the name of being “ironic” and concluded with a big speech about progressiveness which nobody actually remembered. Thankfully, recent films like Jathi Ratnalu (2021), Ikkat (2021), Cinema Bandi (2021) and now One Cut Two Cut (2022) have started to make comedy relatable again. Well, not just relatable, but relevant and important as well.

Directed by Vamsidhar Bhogaraju and written by Danish Sait and Bhogaraju, One Cut Two Cut tells the story of Gopi (Sait), a teacher with a Masters in Arts and Craft who has been hired by the government school in his locality. But on his first day at the school, Gopi, his students, and the rest of the faculty are taken hostage by four goons dressed as the robbers from Money Heist. That’s when the narrative shifts to the faces behind those masks. The self-proclaimed leader of this group is Pruthviraj (Prakash Belawadi), an ex-radio jockey who hates Amitabh Bachchan. Then there’s Gurudev (Manosh Sputnique Sengupta), an ex-Army cook, Ayan (Vineeth Beep Kumar), a struggling stand-up comedian, and Neha (Roopa Muthurayappa), an environmentalist. And it’s revealed that they plan to use the school as leverage and force the CM, via the CM’s Secretary (Sampath Maitreya), to fulfil their demands.

Sait and Bhogaraju use this simple albeit absurd premise to talk about numerous other topics, with the biggest one being the decaying infrastructure of government schools. It is kind of a no-brainer because the setting is a government school. But given how the Central and State governments get triggered by anything critical about their work, you’d think that the movie would just use the setting in an apolitical way. No, One Cut Two Cut gets very political by showing how people and governments waste time by talking about the beef ban, liquor ban, movie bans, and other such non-issues, while putting effort into muzzling the media, instead of fixing the education system. The movie manages to go a level deeper by commenting on irresponsible parenting (which is later subverted with a joke though) to show why the government gets a pass for its apathy towards those who’ll shape the backbone of the country. 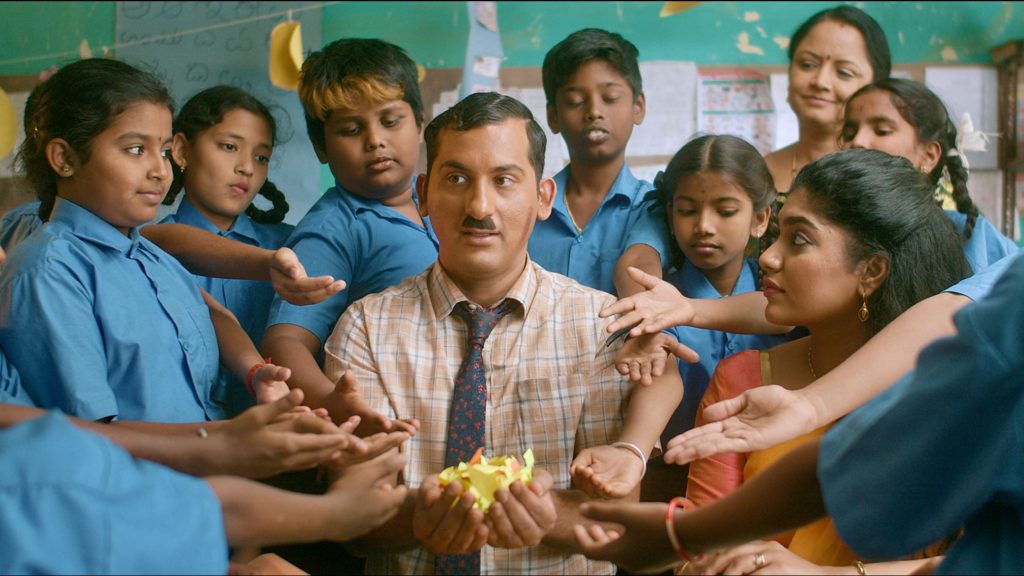 However, please don’t let the depth of the themes embedded into One Cut Two Cut’s narrative give the impression that it’s not handled in an incredibly fun way. Firstly, Bhogaraju employs the language gap between the “terrorists” and Gopi to create a lot of hilarious confusion. Secondly, he uses the difference in the tonality and pitch of Gopi, Pruthviraj, and the CM’s Secretary to generate laughter through their conversations. Thirdly, there’s the incompetency of the head of the Sleeper Agents, played by Bhogaraju himself, who isn’t aware of his incompetency and hence walks with a misplaced sense of confidence. It both serves as a swipe at ultra-nationalists and is the best running joke in the movie. And finally, Bhogaraju extracts every ounce of talent from his cast to tickle your funny bone. Sait and Belawadi are certainly the linchpins of One Cut Two Cut. But everyone from Vineeth to Maitreya gets their moment to shine and shine they do.

The movie is paced very well thanks to DOP and editor Sahit Anand’s work. It’s mostly restricted to one location and the jumps to the other places are often unmotivated and sudden. There are bits like the CM’s hula hoop loving daughter or the song-and-dance sequence (which is odd because it’s the only one in the movie) which necessarily don’t have any bearing on the plot. But things never become unengaging. There is a 10-to-15-minute space during the second act where you might feel that it’s becoming a little repetitive. That happens because Bhogaraju probably thinks that the point of the movie hasn’t been established well enough. Hence he resorts to reiterating said point over and over again. So, you have to power through that and the rest is smooth sailing right up to its comically tragic conclusion. The aforementioned song sequence is beautifully designed and sung by Benny Dayal and Ramya Bhat though. No doubt about that.

In conclusion, One Cut Two Cut is a mighty fun time. It has excellent performances from Danish Sait and the rest of the cast. It’s what folks like to call a “family movie”. Therefore, you can enjoy it by yourself and with your family. In addition to all that, the way Bhogaraju and Sait manage to not only capture the various generations of people trying to coexist with each other, online and offline but also give a unifying message about education. Given how there’s a rise in hyper-nationalism and misinformation being spread through mainstream media, thereby leading to the death of intellectualism, it’s important for movies such as One Cut Two Cut to come forward and remind audiences about how destructive it is. The rot caused by the trivialization of education has already set in. And now we can only hope that some people watching this will wake up, reject propaganda, and rejuvenate education.

One Cut Two Cut is streaming on Prime Video.

Ferroequinology [2022] 'Slamdance' Review: A Meditative Documentary that Embraces the Mundane