Ferroequinology [2022] ‘Slamdance’ Review: A Meditative Documentary that Embraces the Mundane

Before watching the documentary film, I needed to understand what its title means. ‘Ferroequinology’ loosely translates to the study of trains or the study of locomotives – iron horses as some would like to call them. In the documentary film of roughly an hour or so, what we witness are two different photographers who indulge in the pursuit of the same study with their cameras. They capture photographs and their daily lives revolve around getting images exclusively of trains and the things that come along with them. They either get on the trains themselves to capture the beauty and the essence of the travel experience or they seek these photographic images in their own discipline.

Throughout the film’s duration, what we witness is a considerably slower pace of their lives. The uneventfulness of their routines makes up for a stark contrast from the fast-paced lives that the majority of today’s generation leads. We go to places, come back from places with a clear goal, a clear destination, or a clearer picture of what we wish to achieve from the endeavour of travel of transportation. Whether we are travelling in order to get to our daily jobs, to collect our kids, or to fulfil our domestic chores, the travel serves a purpose that becomes unanimous for a large populous.

However, the two artists that we come across through Ferroequinology travel with their own set of ideas on how they lead their lives. These ways or manners of living do not fit in the mould that is considered to be normal by a vast population. A pursuit not for a monetary or a materialistic gain seems futile for our brains to have been trained to believe that monetary gain is the only reason we should do these things. In such a case, the two artists feel like carefree voyagers with lives that are freer and more enriching in terms of the daily experiences that they go through. 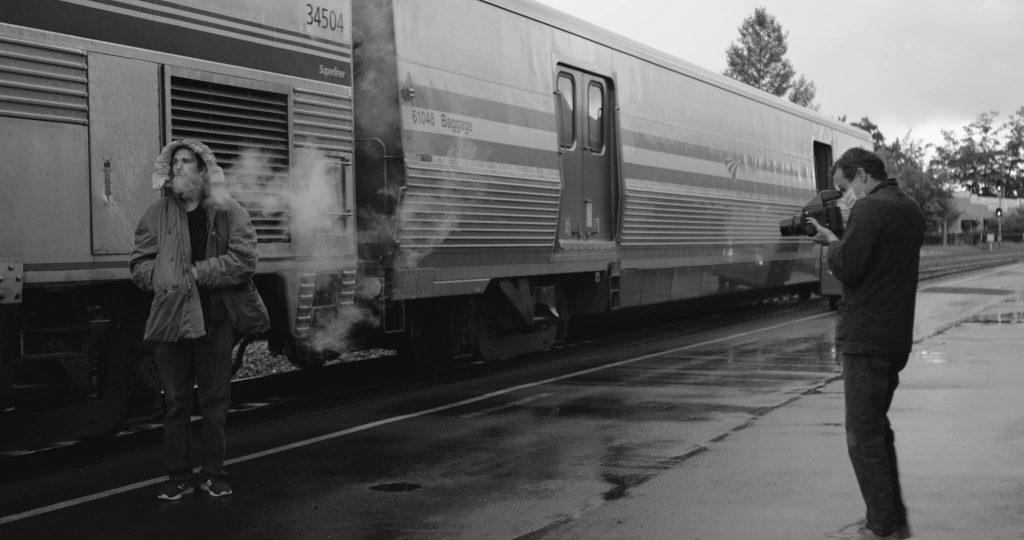 One of the photographers – Andrew Cross chases freight trains in pursuit of a perfect landscape shot. He travels through the Black Rock Desert in Nevada in order to fulfil this task and makes up for highly instinctive choices while being knowledgeable and cautious enough of the timings of trains. He understands when these trains would arrive for the perfect picture that he craves to capture. His drive to do this continuously for a prolonged period gains significance due to his undying devotion for the same. There is a certain poeticism and beauty in the way he seeks these images, which makes seeing his uneventful pursuit highly engaging.

Another artist that we come across through this meditative documentary film is McNair Evans who likes sharing stories and making portraits with fellow passengers. He usually travels on an Amtrak train from San Francisco to Portland and goes on with the aforementioned task. In his journey, the desolate carriages take on an otherworldly presence and the personal narratives of the passengers become the endearing snapshots of the mundane. They follow a rhythm that lulls you into sleep and makes you crave such non-destined journeys for yourself.

Related to Ferroequinology: The Severing [2022] Review – Calisthenics That Careen Into Tedium

We see the narrative unfolding in a gorgeous monochrome which reflects the dissonance of the subject matter from the fast-paced society of today. Shot and directed by Alex Nevill, the film borrows its gravitas by not rushing through any of the interactions, giving those conversations their due time, and by letting the viewers sink in the dialogue. You sense the passage of time and grasp the necessary details of the journeys due to the editing by Nick Gibbon. It plays with the concept of the slowness of time along with the photographers who try to distil a moment in time in a single picture. The lyricism and the fluidity of the narration are also derived from these aspects.

The conversations take turns from personal lives to politics to religion or a belief in god in a way that never feels forced. The beauty of the film is largely through its organic conversations without any interruption. Through the beautifully captured expressions of the travellers, you sense a range of emotions attached to every other experience that they share and how attached they are to what they are conveying to the next person. Ferroequinology becomes a revelatory and insightful portrait of nothingness and celebrates the humdrum manner of living in an earnest way. What we see on the screen are the emotions and feelings that the two photographs strive to capture through their works.

Ferroequinology SCREENED AT THE 2022 SLAMDANCE FESTIVAL

Ferroequinology [2022] ‘Slamdance’ Review: A Meditative Documentary that Embraces the Mundane