Pachinko Season 1, Episode 7: Recap & Ending Explained: The seventh episode of Pachinko finds Kogonada returning to the director’s chair once more. And he creates an episode which is also one of the most singularly devastating things put to screen in recent memory. This is the only episode so far in the show which runs without any intercut between the past and the present. It basically is our guidebook to Koh-Hansu and his origins.

The direction of Kogonada helps immensely in elevating the experience. Trademark visual vastness which went missing under Justin Chon returns once again. The intelligent and compelling use of imagery and the subtlety of drama cohere into a brilliant whole. In fact, the episode single-handedly resurrects Pachinko for most of the sins it has committed so far. It’s an instant classic.

Before we deep dive into Pachinko Season 1 Episode 7, do read the explainer on the sixth episode.

A young Hansu returns to his father from the Holmes household. This is a wealthy American family and Hansu serves as a Math tutor to their heir Andrew. However, he gets a little late that day because he went to run an errand for them. His father tells him that he is not the servant of the Holmes, and should only focus on teaching their son. After this rather casual conversation, the father-son duo goes to the Yokohama boxing ring, where a match is going on as usual.

But they’re not here to witness the match. Instead, they go there to meet the Yakuza Ryoichi, for whom Hansu’s father is an employee. Ryoichi, in a grave tone, asks Hansu when he will join them since there are so many businesses to handle. His father intervenes and proudly informs his master that it will not be possible for Hansu to work here, since he is serving as a tutor to a wealthy American heir. Ryoichi mocks them for sucking up to the Americans. However, he advises Hansu to learn more Japanese so he too can become one of them.

Then we see Hansu tutoring Andrew, who is a visibly dull student. Mrs. Holmes enters into the scene. The beautiful lady remarks at Hansu for understanding such complicated Math. Andrew then requests his mother to let Hansu accompany them to America. He says that he’ll fail the examinations there without his tutorage. Mrs. Holmes tells them that she’ll try and convince her husband for the same. 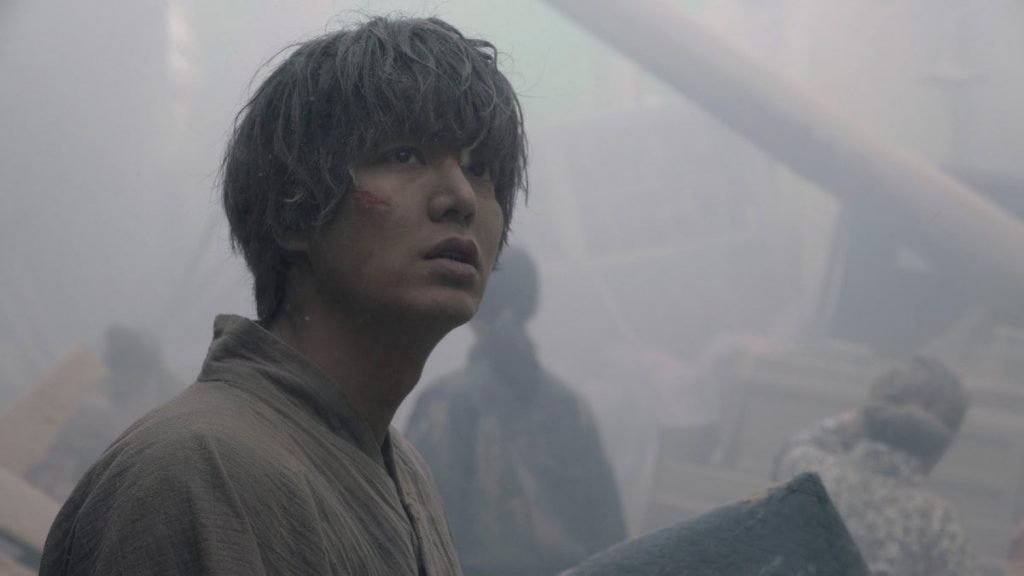 Hansu then transfers this conversation to his father. Although his father is quite critical of the Americans and says that equality is but a colonizing illusion, he also asks Hansu not to dodge this chance. However, Hansu is skeptical, and he asks how he can betray the promise they made to each other of staying as a team. Nevertheless, the old man is able to persuade his son to go to America.

Later on, Hansu comes to know that his father has pumped a large sum of money off his master’s business for a woman. The boy then enquires his father about his reasons to do so. His father simply says that love makes you do certain things, and he’ll know it once he falls in love with a woman. However, Hansu says that they’re clearly in deep trouble. He also refuses to leave to America. Angrily, his father says that he sees a ridiculous man buried under Hansu. He also beats him up in the middle of the street. However, Hansu still follows his father to Ryoichi and offers himself in servitude. His father tries to buzz him out, and suddenly, a tragedy strikes.

It is the doomed day of the Great Kanto earthquakes. The devastations are massive, and Hansu’s father is tragically dead. Once Hansu regains his consciousness, he starts grieving. Suddenly, Ryoichi gets him off the camp and takes him to the upland nearby. He shows Hansu the tragic nature of these devastations. He rationally exposes him to the fact that he is not the only orphan out there, and that he is indebted to his father more than anyone else. He suggests him to go find the Holmes family and accompany them to America.

This knocks some sense into a grieving Hansu. He rushes towards their family home and finds them preparing for the journey already. Hansu is inquired about his father by Mrs. Holmes. When he bows his head down, she pities him and asks him if he will follow them. Hansu nods in approval, and they start their journey. However, he gets separated on the way from the rest of the family. However, in the midst of chaos he manages to meet Ryoichi who is in outlook of his own family. Together, they make their journey. On their way to the borders, Hansu finds the corpses of the Holmes family and is visibly devastated.

In a village, they decide to rest at a tea shop. The owner asks an attendant to serve some tea for them. However, her hands tremble while offering them tea. So, Ryoichi comfortingly takes her pot and serves it himself for both of them. Soon, anti-Korean sentimentalists start the rumor of Koreans trying to use the disaster as an advantage to kill and loot the Japanese. Ryoichi is startled by the hostility for Koreans all around, and is worried that they might hunt down Hansu as well. Suddenly, he catches the sight of an old man helping Korean fugitives to escape.

Hansu himself tells them to go and hide at the nearby barn. Ryoichi then hides him into the carpets, and tells him not to move or even breathe. Suddenly, a few Japanese vigilantes emerge into the frame, bloodthirsty and asking for the whereabouts of the Japanese. The carpet seller helplessly tells them that they’re hiding in a barn. In a horrifying scene, Hansu uncomfortably gasps for breathe as he witnesses Koreans being burned alive.

Pachinko accompanies Ryoichi to the outskirts of this village. Here, the old Yakuza finally reunites with his children. He tells his children that Hansu will be with them for some time. Together, they sleep. However, Hansu is unable to get sleep. He is constantly staring at the night sky. His entire explosion has watered down and all that’s left is pain and endless sadness.

He then wakes up and walks up to a tree and holds its trunk. Something well and truly shifts inside him. He realizes that Yakuza is the only way out for now from all this misery. And his success story has transformed into one of origin and survival.

For All Mankind (Season 3) Episode 4: Recap and Ending Explained