Pachinko Season 1, Episode 6: Recap & Ending Explained: The sixth episode of Pachinko marks a slight improvement over the fifth episode. Justin Chon has clearly landed the show on uneven grounds. While the fourth episode was the finest of the show thus far, the fifth turned out to be the worst. The sixth episode fills the left-out and blank spaces with scenes of genuine emotion. Also, it gives us importantly fleshed-out details from the source text.

While this further helps to amplify our viewing experience, there are still apparent problems. The editing intercuts too much between separate timelines and feels a little awkward at times. Also, the terrific cinematographic detail provided by Kogonada in each episode steams out with Chon’s approach. However, it’s still a sign of steady progress that the show might make with its last two episodes.

Before we deep dive into Pachinko Season 1 Episode 6, do read the explainer on the fifth episode.

A young Solomon is chattering with his school friends. Suddenly, Hana barges in and seizes him by hand. She possessively tells him to stay off the “bitches”. Both of them are quite intimate and it’s clear that Solomon likes Hana. While Solomon is more rooted in the circumstances, Hana is chirpy and wants to travel to western countries.

Both of them go to a supermarket, where Hana encourages Solomon to shoplift. But the shopkeeper catches him doing so. He locks him in the shop and dials the police. Solomon gets arrested.

Solomon stays in police custody until evening. His father Mozasu tries to convince the police inspector to let go of his son on account of a first-time offense but in vain. It is then that Hana uses her influence to free Solomon. Mozasu then questions Solomon about whose fault it was. Solomon lies and tells that it was his mistake and Hana had nothing to do with it. He also promised his father that he’ll never do such a thing in the future. Mozasu however thinks that the company of Hana will ruin him and decides to immediately dispatch him to the US.

The family has finally found out the whereabouts of Hana. She has been diagnosed with AIDS. The head of the hospital doesn’t want Hana to stay there due to the obvious fear of contamination. However, a young doctor steps in and assures Etskuo and Mozasu that Hana will be able to get her treatment to spend her last few days painlessly. Solomon tries to persuade Hana to travel to America with him since there’s a lot of medical progress there. More importantly, they are trying to find a cure for AIDS.

Hearing this, Hana starts her exposition on how she contracted the disease. She then justifies her rant by telling him that she wants him to know what kind of a life she has lived after he went to the USA. She tells him that the Hana he knew has died. Hana goes on to tell him that no matter how much he tries to blend with the Americans and the Japanese, he’s never going to become one of them. As Solomon is fired from his workplace, he empties his office and casts his particulars into the fountain pool of his office.

It’s here that he meets Mr. Yoshii. He tells him to meet him and tells him that they have a lot in common. In the car, Yoshii brings up Mozasu’s pachinko parlor and tells him that it’s profitable. Solomon thinks that it is irrelevant, and pachinko is a dead-end in Japan. Yoshii however, tells him that he intends to set up a pachinko parlor in places like Korea, Thailand, and even Vegas. Since Yoshii’s corrupt history is no secret to Solomon, he asks if it is even legal. Yoshii replies that he wants to get over his grandfather’s history and assures him that no such thing will happen again.

Meanwhile, in the hospital, Hana is hostile to Etskuo. In the meantime, Sunja arrives there. Hana sarcastically comments that it’s a whole damn family reunion. Etskuo leaves. When Sunja starts washing Hana, the latter gets confrontational. She replies that she coaxed Solomon to leave her. She further says that it was Sunja who encouraged her to leave the house. Sunja gets confused hearing this. To this, Hana reminds her that she said that “they” will ruin Solomon’s life if he stays there. Sunja tells her that she didn’t mean Hana alone. She also meant herself. She goes on to tell Hana of her other son, whose life she ruined. So, she didn’t want to repeat the same mistake.

Sunja’s words comfort Hana to a great extent. She lets Etskuo feed her. Sunja goes on to tell Hana that it doesn’t matter what kind of success one has. However, the way one succeeds matters more. She says that she could have been at a different place, and could have been rich. However, she chose not to, because there was no dignity in that path.

Yoseb is shouting loudly at Kyunghee. When Sunja tries to interject, he scolds her too. He scorns at them for making such a futile decision all by themselves. He says that by paying for him, they have washed his respect off into the streets. Angrily, he storms out of the house. Kyunghee tries her best to make him return but fails. When she returns, she sees that Sunja’s water has broken. She’s in deep labor and gives a blood-curdling scream.

Isak on the other hand is comforting a middle-aged woman. The woman pleads with him to try his best and make her drunkard son return. Isak tries to use his usual pacification techniques to make the man’s mind change. However, the man tells that he’s rather angry with the way he and the other Koreans are treated on the Japanese mainland.

While there’s little he could do, he has reached his breaking point and there’s no use looking back. When Isak asks the man to think about his mother, the man tells him to convey to his mother that she had been caring and loving all her life. This conversation brings about a change in Isak, who thinks about his status as a minor. When Isak returns home, he’s shocked to see Sunja in labor. Kyunghee tells him about what happened. Further, Sunja tells him not to worry about her and go find Yoseb. 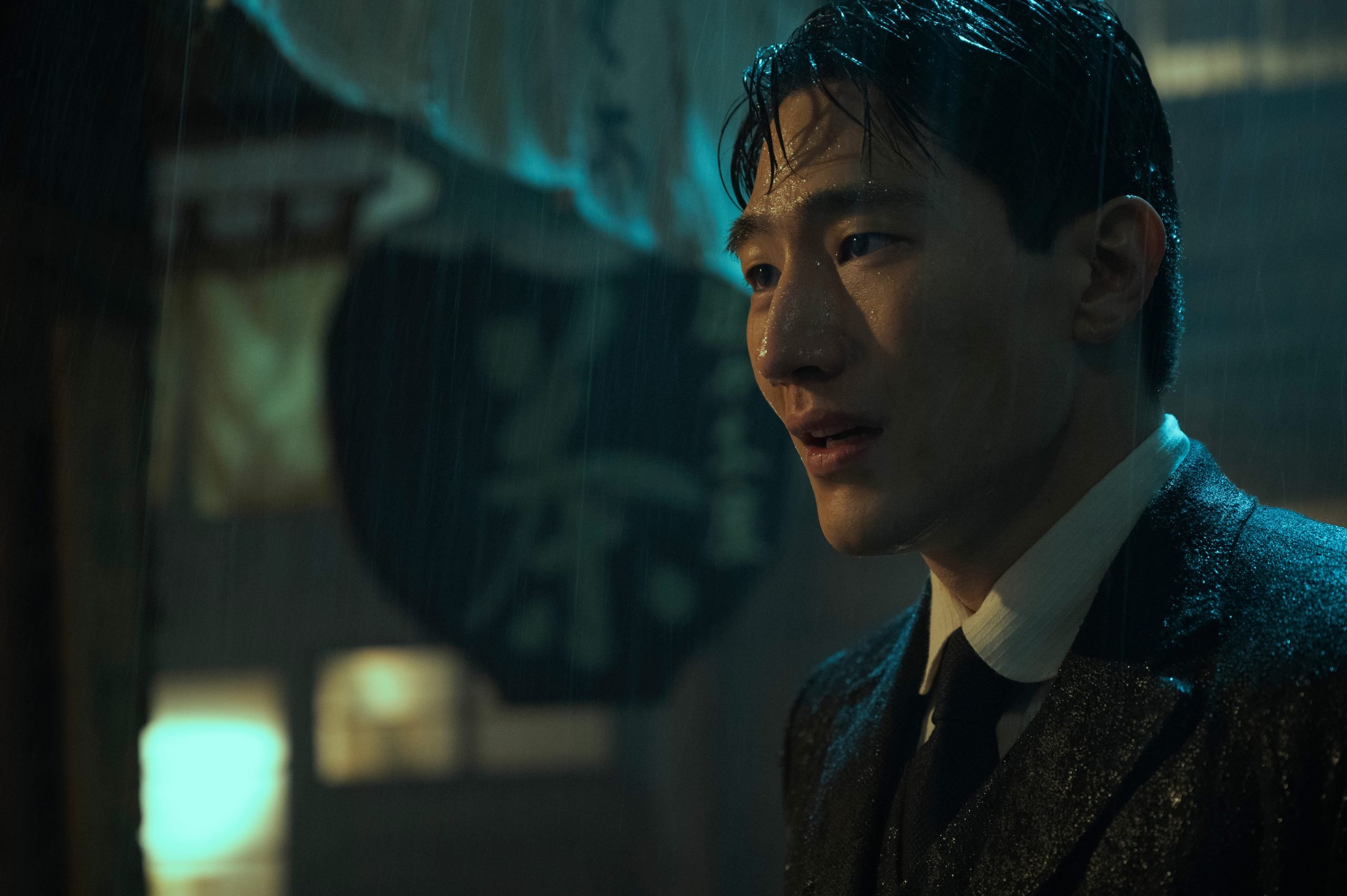 Meanwhile, Yoseb is getting drunk in the bar and casually tells that he’s from a noble lineage. The drunken Koreans laugh him off, telling him that they too are noblemen. Isak enters and tries to fetch Yoseb. However, Yoseb shrugs him off, telling him to be there for his pregnant wife. However, Isak tells him that he’s here exactly because of her since it was she who told him to fetch him. When both are getting drunk, the Japanese soldiers barge in and interrupt their drinking. It’s then that Yoseb tells Isak about his feelings of rebellion.

Meanwhile, at home, Sunja has a complicated delivery. A neighbor helps Kyunghee in the process. The neighbor excitedly tells them that it’s a son. She washes the boy and gives it to her mother’s arms. Isak and Yoseb enter the home and are surprised to see the child in Sunja’s arms. Sunja says that their son is born. She wants her brother-in-law Yoseb to name the baby. Yoseb takes the baby in his arms and starts crying. He names the baby Noa, their savior.

The scene takes place in a lavish home. There’s a beautiful garden surrounding this home. A woman can be seen gazing at the flowers. She is Koh-Hansu’s wife. Hansu walks up to her and tells her that he has a son now, and she is freed hence from her conjugal duties.

Unplugging [2022] Review: A Relatable Comedy about Digital Detox that Shines Through All Odds