Home»OTT»Prime Video»Sardar Udham [2021] Review: A Slow but Steady Exploration through the Annals of the Aftermath of the Jallianwala Bagh Massacre
Prime Video/Reviews

Sardar Udham [2021] Review: A Slow but Steady Exploration through the Annals of the Aftermath of the Jallianwala Bagh Massacre

Sardar Udham Singh, during one of his last days in the prison, says that the Jallianwala Bagh Massacre, that took place on April 13, 1919, might be a footnote in the British colonial history of the Indian continent, written in fine print at some corner in their document, but the incident forced him to stare into the face of death. He sets out in search of Michael O’Dwyer, the Former Lieutenant-Governor of Punjab, after successfully absconding the Indian continent post-release from prison, and assassinates O’Dwyer on March 13, 1940, at the Caxton Hall in London, United Kingdom.

However, this seemingly simple story is complicated by Singh’s journey across Europe to gather momentum for his revolutionary goals and a wide amount of undisclosed material about him, leading director Shoojit Sircar, famous for his films Vicky Donor (2012), Piku (2015), and October (2018), among others, into crafting the story of a spectre-like character, Udham Singh, meticulously. With a runtime of 162 minutes, Sardar Udham unfurls Singh’s story slowly and steadily, leaving us with an insight into the corridors of the British legal system and the colonial attitude towards the Jallianwala Bagh Massacre.

The first hour of the film constantly jumps back and forth in time – from London, 1934 to Lahore, 1927 and USSR (former Soviet Union), 1933. It heavily fractures the narrative, and it threatens to leave the audience gaping for an anchor, losing their interest. However, DOP Avik Mukhopadhay and production designers Mansi Druv and Dmitrii Malich (international) successfully bring to life these specific periods in time, poised between the two World Wars in different European cities, through their brilliant frames. Finally, the film settles into a past-present narrative movement in its later half, juxtaposing the cold, steely colours of a London street against the sepia-tinted happy days from Singh’s memories in Punjab. 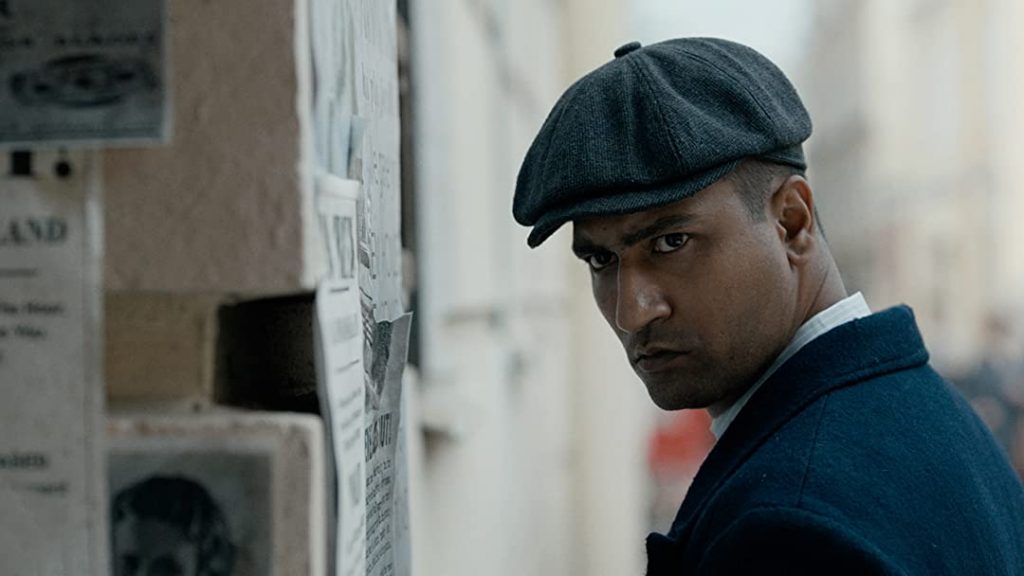 The Jallianwala Bagh Massacre also comes to life in all its gory, bloody details, right from its moment of conception to its harrowing, spine-chilling aftermath. While few Bollywood films have previously sought to venture into bringing out a flavor of this heinous massacre on-screen, including Rang De Basanti (2006) and Phillauri (2017), their efforts mostly brushed the surface lightly.

Sircar delves into the details fearlessly, showing us a young Udham Singh tirelessly ravaging through the multitude of dead bodies at the site, fishing out the wounded on a trolley cart. In a particularly heartbreaking scene, Singh sits helplessly facing a little girl, who is calling out for her mother, at the site.

Vicky Kaushal, who plays the role of Sardar Udham, acts with superb ease as he sifts through the roles of a lover, a tortured prisoner under British administration, and, most importantly, a revolutionary. He flares up in anger, revealing his socialist ideology, at certain times, and calls out, “Koi zinda hai?” (Is anyone alive?) after the massacre with equal amounts of pathos. In one of the first scenes, where he is walking across a bleak, snowy landscape in the USSR, his tiredness holds up, and so does the metaphorical difficulty of his journey in life.

Banita Sandhu, who made her debut in Sircar’s October (2018), plays Singh’s disabled love interest, Reshma, and Amol Parashar, best known as Chitvan Sharma from TVF Tripling, features as Bhagat Singh, Udham’s compatriot at the Hindustan Socialist Republican Association (or, Army; also known as HSRA). Both of them, especially Parashar, leave the audience wishing they could see more of these actors on-screen.

The British characters, especially Shaun Scott as Michael O’Dwyer, Andrew Havill as General Reginald Dyer, and Stephen Hogan as Detective Inspector Swain at Scotland Yard, are not caricatures employed for the sake of the plot, an otherwise common occurrence in the Indian film industry.

However, what is more important is the refusal to portray these British characters in a redeeming light with respect to the massacre. Their repulsive comments on the Indians, their culture, and their nonchalance towards the massacre also sparks a tinge of hatred against the colonizers in the hearts of the audience. This same hatred bears out in the controlled expression and acts of Udham Singh as he poignantly plans and executes the assassination.

Udham Singh is a nameless entity – sometimes, Frank Brazil and, sometimes, Sher Singh – whose identity culminates into Ram Mohammad Singh Azad, standing for the republican Indian nation of his dream. The length of the film starts to wear the audience out just at the moment it gets filled with action; some scenes – like the one where he drinks liquor and presents a speech on ‘Free Speech’ to an old, English man at a park in London – might seem unhelpful to the development of the plot, which is otherwise a tight-knit engagement into Singh’s trial, leading to his death by hanging on July 30, 1940. Shantanu Moitra’s background score blends into the ambiance of the film, but is lost on more than one occasion, losing out on making any significant impact upon the audience’s minds.

Sardar Udham is a well-executed biopic that deserves to be watched for leading us into one of the many not-so-popular lives of revolutionary Indians who sacrificed themselves for the freedom of India from the British Empire and Kaushal’s performance as the protagonist, Udham Singh.

Sardar Udham [2021] Review: A Slow but Steady Exploration through the Annals of the Aftermath of the Jallianwala Bagh Massacre