Whodunit narratives rely on the factor of revealing more than anything else. The popular writer, Agatha Christie, has penned a series of narratives that skillfully weave such suspense while presenting myriad intriguing characters. As a result, it does not come as a surprise that those who wish to dabble in this genre revere this author and her works. While we may have our reservations or criticisms towards her creations, it is undeniable that she has made a huge impact on murder mysteries. ‘See How They Run’, directed by Tom George, is a quirky tribute to her legacy, told in a style reminiscent of Wes Anderson.

The screenplay of ‘See How They Run’ is written by Mark Chapell. The narrative begins in London’s West End in 1953. Leo Köpernick (Adrien Brody), a big-time Hollywood director comes to England with a plan. He narrates the crucial elements of the narratives (expositions) that also illustrate his point of view. The Mousetrap, written by Agatha Christie, is being performed in London, and it is the special occasion of the 1000th performance. While the play has gained such popularity, he considers it to be a second-rate murder mystery. He is planning to adapt it for a movie screenplay. But his thought process does not align with that of Mervyn Cocker-Norris (David Oyelowo), who is the writer.

Leo is certain that Mervyn does not understand how a movie works. He wants a murder act to be revealed within the first 10 minutes of the film that will grip the audience, according to the conception of Hollywood. Mervyn finds this intellectual binding preposterous. He introduces other characters related to this play, which is already a smash hit. The play’s producer is Petula Spencer (Ruth Wilson), the play’s male lead is Richard Attenborough (Harris Dickinson), and the female lead is Sheila Sim (Pearl Chanda). Leo is there to convince the producer John Woolf (Reece Shearsmith) to allow him to direct the film adaptation.

During his visit, he misbehaves with Sheila, and resultantly, ends up in a fistfight with Richard aka Dickie. The same night, he is killed backstage by an unknown assailant. To investigate this murder case, Inspector Stoppard (Sam Rockwell) is brought in. A young, wide-eyed Constable Stalker (Sairose Ronan) is assigned to this investigation with him by Police Commissioner Harrold Scott (Tim Key). Everyone that was present at the celebration is considered a probable suspect and a potential victim at the same time.

In their pursuit to find the killer, Stoppard and Stalker go to Savoy Hotel, where Mr Köpernick was staying. From the hotel manager, they learn about his heated argument with Mervyn. As a result, they question the writer, who notes the debate being about their differing ways of working. While Leo wanted it to have an action-packed ending, which Mervyn loathed even the idea of. During their interrogation, his short-tempered nephew Gio (Jacob Fortune-Lloyd) pops by. Their relationship seems to be planned to hide who they actually are of one another. Meanwhile, he also recalls seeing a plain woman (someone who is not particularly attention-worthy) heading towards Köpernick’s room with a child.

While speaking with John, Stoppard and Stalker learn that Köpernick blackmailed him to let his wife – Edana Romney (Sean Clifford) knows about his affair with his assistant – Ann (Pippa Bennett-Warner). Meanwhile, an usher at the theatre – Dennis (Charlie Cooper), shares a description of someone he thought to be suspicious at the time- wearing a big overcoat. His vague details do not help the case to proceed further. Later, they learn from Petula Spencer that she optioned the film rights to Woolf, but he couldn’t start working on the movie project because of a contract that restricted its reproduction until the show is closed.

Stoppard stops near a pub and tells Stalker that he will go for his dentist’s appointment. She follows him to find out that he actually went for a drink to also get away from her for a while. Eventually, the two bond when she shares details about their personal lives. She tells that her husband died sometime before, leaving her as a single mother of two children. Stoppard then opens up about his wife, who left him after having a child with another man. While driving him back, Stalker finds a picture of Stoppard’s ex-wife – who looked similar to Mervyn’s description of the woman that went to Köpernick’s room.

Afterwards, Stoppard and Stalker attend a performance of The Mousetrap together. She sees him leaving the auditorium with his big overcoat and black gloves. She follows him because of her earlier suspicions due to his fishy behavior and also because he matches Dennis’s description. She loses her composure when she jumps into the cast and the producer standing aside after the performance. Right afterwards, she sees from a distance, a gloved figure strangling Mervyn. She suspects it is Stoppard and follows him through the crowd. Outside the theatre, she hits him with a snow shovel, leaving him unconscious. 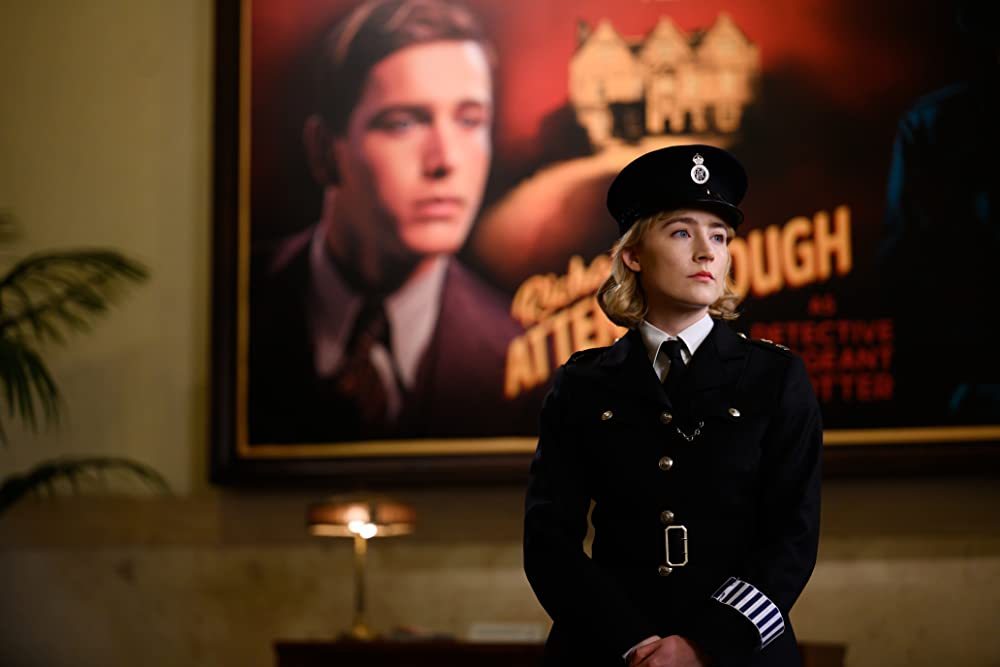 Stoppard wakes up in a cell with Stalker and Scott next to him. By that time, Stoppard had contacted ‘the ordinary woman with glasses’ – Joyce, who enters this cell. Stalker had surmised her being Stoppard’s ex-wife and his motive of killing Köpernick being the person who stole her from him. However, Stoppard gets exonerated since the woman and Stoppard did not have any idea about each other’s identities. Stalker escorts her back home, where she mentions overhearing a village idiot accent of a tall man speaking with Köpernick. While Stalker realizes the killer right away, Stoppard also deduces the puzzle, while going through the notes made by Mervyn.

Who kills Leo Köpernick and why?

Richard, Sheila, John, Ann, and Petula arrive at Agatha Christie’s home in Wallingford, Berkshire due to the dinner invitations. The butler finds their arrival unexpected, but Agatha’s husband lets the guests in. Meanwhile, Stalker arrives at someone else’s house, breaks in, and finds the same invitation. When she rushes outside, she finds Stoppard, who had arrived at the address with the same conclusion. The killer is the usher at the theatre – Dennis, the same person who shared details about a suspicious person.

In Wallingford, Dennis barges in with a gun where the guests were sitting. He confesses to killing both Mervyn and Köpernick, and the group tries to deduce the motive behind it. While Richard assumes it perhaps not liking the play, Petula’s mother – who is also present at the scene, remembers him as Dennis Corrigan, whose brother got killed, and the same story inspired Christie to write The Mousetrap. He then notes killing both the writer & the director to stop the play from being further adapted into a film. He was angry at this exploitation of his personal life for entertainment.

Apparently, Dennis was the one who forged the invitations to gather the guests together at Christie’s place. Before that, he captures Edana and brings her with him, assuming her to be Christie. Soon after, Christie enters a tray filled with multiple cups of tea. She plans to kill Dennis with the poisoned tea in one of those. However, the butler drinks the poisoned tea by mistake and faints. Dennis realizes their attempt to capture or kill him. Meanwhile, Stoppard arrives at the scene with a gun and to distract Dennis, Sheila throws a Molotov cocktail at him.

In the fire that ensues, Stoppard is at Dennis’ gunpoint and by that time, his gun’s barrel gets empty. At the same time, Stalker arrives at the house and jumps over Stoppard to save him from the bullet. Dennis misses the shot after which Christie attacks him with a snow shovel. Sadly, despite Stalker’s efforts to save him, the bullet ends up wounding Stoppard.

The narrative then ends with Stalker passing her sergeant’s exams with high grades and Stoppard receiving an honorary medal for his achievement after being recovered from his injury. After that, they both attend another screening of The Mousetrap together. After a series of entertaining revelations in their quest for a killer, the screenplay goes through an amusing play between motives, possibilities, and proofs.

In the end, it resorts to the entertainment that it brings by not disclosing any of the details. So, it ends up being more of a tribute to the whodunit queen – Agatha Christie than anything else. Someone, who is well-acquainted with her work, will find easter eggs throughout the duration. Even if one doesn’t, the film ends up being a fun ride.

Read More: Where to watch ‘See How They Run’ Online?

Where to watch See How They Run

The Takeover (2022) Movie Ending, Explained - How does Mel Prove that she is Innocent?