Josephine Decker’s ‘Shirley’ (2020) is based on Susan Scarf Mercell’s novel of the same name, which attempts to delve into celebrated author Shirley Jackson’s psyche and creative activity. It does so by intersecting fact with literary myth.  Hence it isn’t the usual semi-fictionalized biopic of a renowned yet misunderstood genius. The foremost intriguing aspect of the story is how Shirley’s tormented womanhood and creative mind is viewed through a younger woman’s eyes, a character that seems to have purely come out of a Shirley Jackson story. This choice makes ‘Shirley’ an examination of delimited gender expectations; something hefty than the conventional portrait of prickly, obsessive, and agoraphobic Shirley Jackson.

I have read only two of Shirley’s novels and one short story collection (of course The Lottery!). Even with this limited exploration, the author’s incredible ability to unmask the darkness that lurks beneath modern society had a discernible effect on me. Furthermore, Shirley Jackson employs horror tropes to almost always echo the breakdown of the female psyche. In that respect, ‘Shirley’, adapted by Sarah Gubbins, unfolds like one of the author’s stories. The anguish and horrors experienced by the characters are nonetheless bereft of supernatural filters.

The multi-layered ‘Shirley’ opens with the recently eloped young newlyweds Rose (a brilliantly intense Odessa Young) and Fred (Logan Lerman) moving to the picturesque North Benington home (Vermont) of Shirley Jackson (a spellbinding Elisabeth Moss). Fred is about to take up the job as a lecturer at Bennington college. The college’s tenured professor, literary critic, and Shirley’s husband Stanley Edgar Hyman asks his would-be protégé to stay with them. Shirley Jackson prickly dismisses Rose in their first encounter. And soon it becomes clear that the reason behind Hyman’s generous offer is to ask Rose to keep an eye on his mercurial wife. In the earlier part, Hyman is intentionally portrayed as a supportive husband trying his best to make his wife focus on writing. Discouraged by Shirley’s barbs, Rose initially keeps her distance.

The narrative’s initial portrait of Shirley Jackson is mostly drawn from what Hyman says and from Rose’s limited perspective. Shirley, for her part, plays up to this generalized image. The view that geniuses are often spiteful and troubled is not new. But director Decker and writer Gubbins put up this surface to gradually and meticulously delve into the source of her frustrations. After slowly getting acquainted with the unpleasant side of the author, and taking up the drudgery of housekeeping, Shirley reluctantly warms up to Rose. As their relationship progresses, Shirley somehow makes Rose aware of the culturally and socially restrictive gender norms. She elicits in Rose the need to shape her personality that isn’t limited to being Fred’s dutiful wife. The complex relationship even withholds a very real sexual tension.

Rose also becomes a muse of sorts for Shirley as the latter’s vision is filled with fictionalized images of Rose, which she mixes into her story of a missing girl. Set in the early 1950s, Decker’s ‘Shirley’ partly sketches the arduous creative process behind the writer’s second novel Hangsaman. The novel is inspired by the real missing person case of Bennington sophomore student Paula Jean Weldon (in 1946). The narrative depicts how Shirley saw herself (and Rose) in Paula, although her husband casually dismisses this fascination. At one point, Shirley resolutely states to Hyman, “There are dozens and dozens of girls like this littering campuses across the country. Lonely girls who cannot make the world see them; do not tell me I do not know this girl, don’t you dare.” 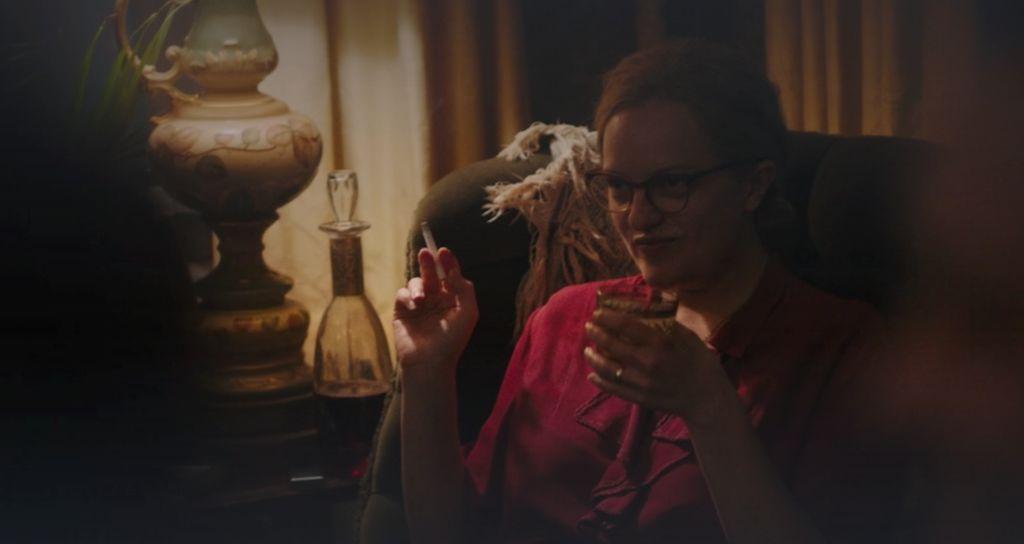 This was also the time Shirley Jackson held literary circle in thrall with her fearful tales, and yet her genius wasn’t fully realized. The general public perception of the writer, however, wasn’t very merciful. Shirley’s reclusiveness, agoraphobia, and heavy-drinking turned her into a victim of the local hearsay. The writer herself was dealing with the burden of her newfound fame, which naturally took a toll on her creative pursuits. Moreover, Decker and Gubbins provide a condensed character sketch of Shirley Jackson. It means that a lot of issues – like addiction to alcohol, prescription pills, and severe agoraphobia – saddled the author only at the later part of her literary career. The newlywed couples are of course a total fictional creation. And to completely focus on the kinship between Rose and Shirley, the author’s three children don’t appear in the narrative at all.

Josephine Decker captures the atmosphere of social conformity of 50s America, and how such pressures create the position of privilege for men and disadvantages for women. Logan Lerman’s Fred is typical of a young, ambitious man, abusing his privilege to dick around. Michael Stuhlbarg’s Stanley Hyman is a more effective creation. The complex marriage relationship between Shirley and her philandering, petty, and manipulative husband is terrifically written. And it’s great fun to watch the two incredible performers – Moss and Stuhlbarg – play against each other.

Decker’s previous film was the critically acclaimed indie, Madeline’s Madeline (2018) which utilized a disorienting aesthetic to convey the internal struggles of a young woman. This film too has a voyeuristic quality to it, but she meagerly employs the feverish aesthetics. It may be because Decker largely relies here on her wonderful actors to incorporate the same intensity and tension. Nevertheless, Decker’s framing techniques are never that of a conventional biopic. Instead, it partly reminds us of a Shirley Jackson literary world. On paper, Shirley may sound like a simple emotional tale of embittered souls resisting the repressive social decorum and seeking emancipation. But such sentimental emotional qualities are subdued while Decker reaches for a more potent subtext.

Overall, ‘Shirley’ (107 minutes) unravels the life and emotions of a literary horror writer through an uncannily captivating perspective, and in the process ingeniously obscures the line between truth and fiction.

Judas and the Black Messiah [2021]: 'Sundance' Review - Daniel Kaluuya is electrifying in this powerful and relevant tale about the BPP