Neatly divided into three acts, Neustadter & Weber’s (500 Days of Summer & The Spectacular Now) script has all the ingredients – old couple, smart boy, cute dog – to cook-up a cloying melodrama. But the characters are established as the chief elements of the narrative that every emotion comes from a deep place within and which makes us overlook the odd contrived plot development.

Our Souls at Night [2017]: An Enjoyable Low-Key Drama about Elderly Bed-mates

In many film industries around the world, there’s this absurd notion to make films that only appeal to the young audiences. If age discrimination in cinema is one problem, then there’s widely accepted flawed image of the elderly as non-sexual beings. Especially women actress over 60 has to face the dearth of profound dramatic roles. While main-stream cinema turns young women into mere objects of sex, it often includes elderly women to either play a goofy comic or to be the one-note symbol of amiableness. Nevertheless, in the past decade or so there has been small yet consistent stream of films that has striven to capture the genuine, depthful feelings of the old age [there’s the light-hearted old-couple English films like Still Mine, Le Week-end and slightly darker ones like Away from Her, Amour, 45 Years; the Brazilian movie Aquarius and the Chilean drama Gloria were brilliant character studies about aging, independent women[. Presented by Netflix, Ritesh Batra’s low-key romance of septuagenarians Our Souls at Night (2017) confirms to the giant streaming services’ adage of ‘Netflix and Chill’. It’s a surprisingly enjoyable drama which explores the emotional needs of the elderly who are otherwise pinned under the strict cultural and sociological expectations. 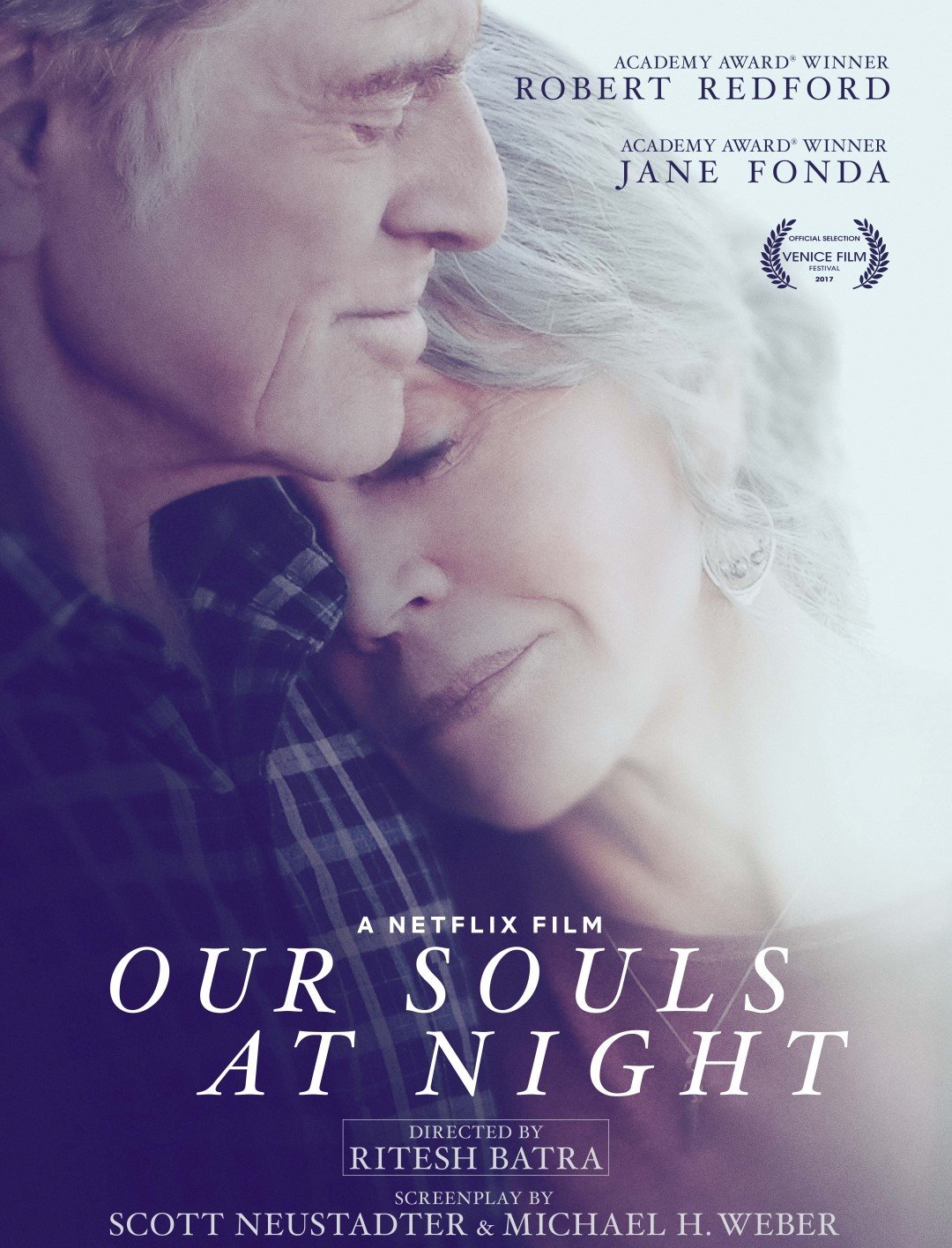 Gene Saks’ immensely entertaining rom-com Barefoot in the Park (1967) celebrates its 50th anniversary and its alluring stars Robert Redford (81) and Jane Fonda (79) once again generate romantic sparks in ‘Our Souls at Night’. The stars have also played together in Arthur Penn’s edgy drama The Chase (1966) and later in Sydney Pollack’s adventure-romance Electric Horseman (1979). Adapted by Scott Neustadter and Michael H. Weber, the film is based on Kent Haruf’s simple yet deeply affecting novella of the same name. The narrative beats here are pretty much predictable, but its stronghold is the exquisitely realized characters who help to achieve the dramatic depths in a smooth, understated way.

Addie Moore (Jane Fonda) reluctantly rings the doorbell of her neighbor Louis Walters (Robert Redford). Both are in their late 70s, lost their partners and lived in the neighborhood for years. Yet they didn’t really got to know each other. Louis, a retired schoolteacher, is just spending a usual night with frozen dinners, crosswords, and weather report when Addie rings the bell. Without much preamble, she enters the house and makes a candid proposal to Louis: ‘Do you want to come over to my house and sleep with me?’ She quickly puts an end to Louis’ bedazed expression by adding that she’s not interested in sex, but just needs the solace of someone being next to her to cope with her own restless soul at night. Louis says he will think it over. To take a break from his own loneliness, Louis later agrees to Addie’s proposal. However, worrying over what the people of small-town Colorado will say, he sneaks into her house from the back. After overcoming the initial nervousness, the duo engage in sporadic conversations, recalling the irremediable mistakes of the past (that has affected their own family in myriad ways).

Of course, when old people doesn’t steadily dwindle out of existence and engage themselves in new pursuits, they naturally become talk of the town. An old geezer (Bruce Dern) and his ring of gossipy old men daily gather at the town’s small diner and pass unrefined judgment on both of them. Addie’s dead-beat son Gene (Matthias Schoenaerts) turns up to leave his seven year old son Jamie (Iain Armitage) under her care for few days (Gene’s wife has left him) and when he learns about his mother’s acquaintance with Mr. Walters he is certainly miffed. Jamie, Addie and Louis, however, have a very good time. The boy who is initially glued to his smart phone soon warms up to Louis and shifts his energy to converse and play with real toys (what a gorgeous train set!). The elders get a dog for Jamie to not get stuck in loneliness at this very young age (and they go on a camping trip). As one could expect, Addie and Louis’ gentle relationship is stymied by the circumstance (a slightly contrived one). And it all leads to an ultimately realistic and bittersweet ending. 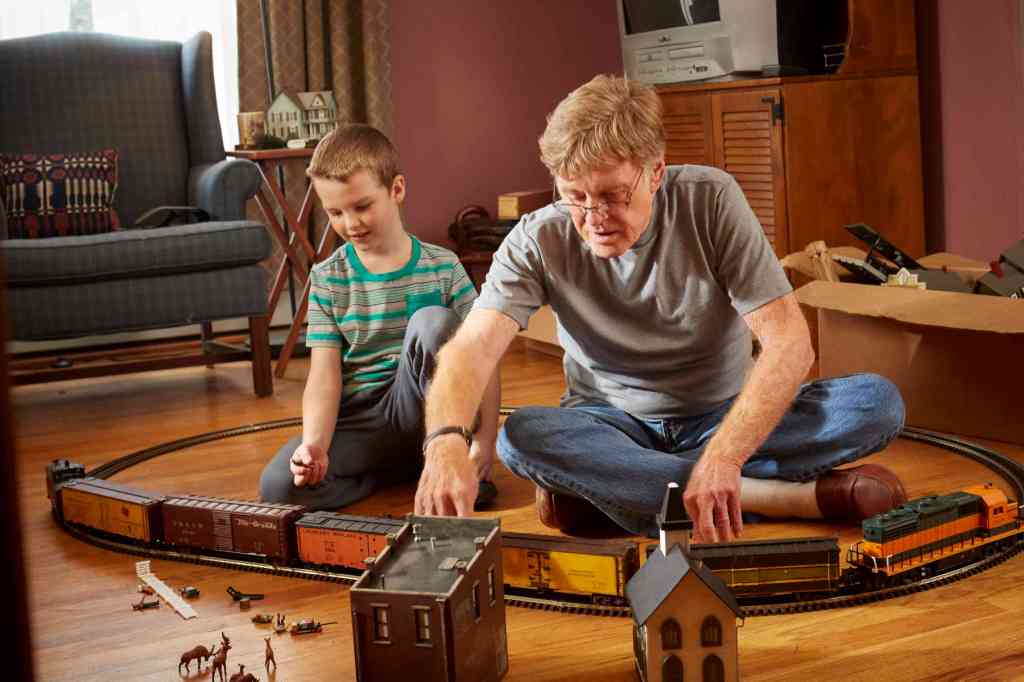 Mr. Ritesh Batra’s (graduated in Economics from Drake University, Iowa) film-making journey is said to have bloomed after attending Sundance Institute’s Screenwriters and Directors Lab (in 2009). Two years later, his documentary on Mumbai’s famous lunchbox delivery system bestowed him with the idea for making the diligently restrained debut feature Lunchbox (2013). The director has recently adapted (with mixed results) Julian Barnes’ Booker-Prize winning novel ‘The Sense of an Ending’. And, the chance for directing ‘Our Souls at Night’ is said to be offered by Mr. Redford himself (who happens to be Sundance institute’s founder). Interestingly, the director’s three movies have revolved around the theme of ageing people reflecting on their existence. Although it might be a coincidence, Ritesh Batra has proved to be amazing in directing the elderly actors, carefully nudging them to explore deeper emotions within the seemingly simple material. Neatly divided into three acts, Neustadter & Weber’s (‘500 Days of Summer’ & ‘The Spectacular Now’) script has all the ingredients – old couple, smart boy, cute dog – to cook-up a cloying melodrama. But the characters are established as the chief elements of the narrative that every emotion comes from a deep place within and which makes us overlook the odd contrived plot development. It’s also interesting to note how the male and female populace perceive the quasi-relationship of Addie and Louis (the characters played by Phyllis Somerville and Judy Greer are broad-minded compared to the characters of Dern & Schoenaerts). At the same time, the central characters’ relationship isn’t amplified to make any clamorous messages on the mindset of small-town society (as Addie says, after occupying the top-spot in local list of gossip for few days, their courtship isn’t anymore seen as a scandal).

Director Ritesh’s sense of blocking and staging the conversation scenes between Addie and Louis (in the bed or dressing table) were understated, nevertheless, effective enough. The film-maker not only excels in the wordless, restrained scenes, capturing the fleeting emotions in the characters’ face, but also proves adept at getting into the buried emotions within the allegedly melodramatic scenes. For example, the conflict between Addie and her son Gene (especially when he comes home drunk) is realized in things not said or through internalized emotions (Matthias Schoenaerts truly makes us empathize with his character whom otherwise would just come off as a despicable guy). Armitage (Big Little Lies) is a gifted kid actor, who convincingly puts forth the emotions of longing, boredom and excitement. Jane Fonda as the bold, clear-headed woman and Redford as the humble ordinary guy brings a greater sensitivity to their roles that becomes an anchor point for the narrative. They perfectly accentuate how people yearn for love and companionship, irrespective of the age group.

Our Souls at Night (103 minutes) is a warm, light-hearted movie about nice old people rejuvenating their feelings of love. There’s nothing groundbreaking about it, but it covers a familiar narrative territory in an elegantly expressive manner.