Claire Denis’s 2022 Cannes Grand Prix winner ‘Stars At Noon’ throws the viewer into the thick of things right away, as we follow the central character, Trish (Margaret Qualley), an American journalist (or so she wishes to be) stranded in Nicaragua, walking through the streets, buying things, all the while seeming to be in a tight situation. Over the course of the film, the urgency the character is struggling to break out away and from curiously dissipates, the tenacity with which she’s initially chalked out flattened out as Denis hops from one scene to another, unable to clasp onto any bare thread of dramatic continuum.  Denis begins her film with a throbbing disorienting effect, as we follow Trish through her everyday routine, her interaction with her surroundings a sensorial, sonically rich landscape of sweaty, coital acquainting of oneself with the other.

As the film unfolds, we discover Trish, a freelancer of sorts, came to Nicaragua to do an article on hangings and disappearances but since then, she hasn’t found any follow-up work and now ekes out a living somehow by sex with random men for US dollars, filching things off the bathroom counters at hotels, acting as an imposter to take the benefits of fancy buffets. She has a liaison with a police sub-lieutenant. She hooks up with a visiting Englishman at a luxury hotel, Daniel (Joe Alwyn) and gradually the two develop a relationship of increasing dependency and trust, returning to the folds of each other while harboring a thinly veiled mutual skepticism.

Trish needs a passport, and a flight ticket back home to the States. The Tourism Vice Minister, who’s fond of her, cannot promise her the same. She has lodged herself too deeply in the crosshairs of a region immured in deep political instability. Daniel tells Trish he is an oil businessman who believes in free and fair democratic election practices in Nicaragua. She remarks she came to discover the “exact dimensions of hell” and firmly believes the country cannot practice autonomous elections, due to Western intervention. Denis tosses in ample ambiguity regarding Daniel, keeping us in the dark in relation to his backstory.

There is a lot of talk of the American puppet state, the rogue state, the gambler’s paradise, and rival outfits hurled indiscriminately into the interactions among the characters straddling a continual trial of loyalties and private confidence.  There are too many stakes in this game, it seems. As she learns to her disadvantage, her growing intimacy with Daniel spoils her chances of a safe passage home since Daniel’s interests are antagonistically positioned to the influential vested parties close to power corridors in Nicaragua. Daniel discovers the partner he has been negotiating with is a Costa Rican cop; he becomes the target of a hunt. Together, Trish and Daniel struggle to escape and cross over to Costa Rica.

Trish gives Daniel refuge at her motel. Soon, there is an attempted scorching and they realize they can be nabbed anytime, were they to stay on longer. As they make their way through Nicaragua, initiating a long journey that takes up the major chunk of the second half,  Trish encounters a CIA official played by Benny Safdie, who entreats her cooperation to ensure Daniel’s being apprehended by the authorities.  She dismisses him, but we notice her palpable anxiety when Safdie’s character pronounces in subtle terms how Daniel can completely endanger her. Daniel and Trish seek to flee the country.

At one of the border crossing Covid vaccination check-in outposts, their car breaks down after they meet Safdie’s character yet again. The two walk through forests, and sell their car in exchange for a boat ride on a smuggling route; however, there is a volley of gunfire. The boatmen are killed. Trish and Daniel trudge through forests and finally seek shelter in an abandoned building where a silent man lurks. The morning after, the guards having been informed close in on them. Daniel is nabbed. Trish accedes to the CIA’s proposition and has him taken to confiscation in exchange for her condition which wouldn’t be impinged on because of Daniel’s risk-attracting credentials and prospects. The film ends with a re-encounter with the police sub-lieutenant, as she thanks him for being good to her during her stay, obviously implying she is returning home.

Beset with conspicuous pacing problems that gain distressing heights as the film sloughs on and on through the second half, the film strains to achieve a loose-limbed quality but only turns into a passive, unrewarding lump of poorly developed scenes hewn together. The latter portions of the film are stubbornly stuck in a peculiar stalemate situation which is understandable given the narrative, yet a glaring sense of wavering control over the material on hand is pretty evident. What makes matters worse is the geopolitical maneuvering that envelops the characters repressively is not received with the due savvy intelligence as one would surmise. There is little depth, just a bunch of people talking about how complicated the situation is but we never get a keen insight beyond fairly generic portraits. The patchy final half hour scrambles to interweave a lot and fails to sharpen out on the scenes; consequently, the melancholy in the compromise that Denis and Qualley push us does not leave half the bite. 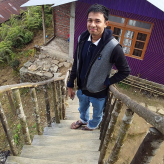