The Bear (Season 1) is a new FX series that has started streaming on Hulu this week. The show’s story revolves around a young chef named Carmy (played by Jeremy Allen White, known for his performance in ‘Shameless’). He has to return from the fine-dining world to his family sandwich shop to tend to and manage the everyday work of the place. Having been dissociated with the world of a small business and its operations, he has more than just a different cooking discipline to adjust to. The managerial duties have their share of pressure and anxieties, which get doubled due to the family issues that he has to face. With the untimely death of his brother, management of the store becomes an added stress on him and his food-loving nature. His struggle to maintain the quality of the food along with the budgetary constraints creates a brooding ground for organic drama. The Bear succeeds to churn out a brilliant piece of content with the same material.

The Bear Season 1 takes us on a journey filled with manic energy. It is backed by fantastic performances by the entire cast. With an actor of Jeremy’s caliber at the center, The Bear rides on the waves of excellence with a high self-assurance and a sense of brevity akin to that of a master artist. The drama derives from conflicts that are organic and consistently engaging due to their close-knit relation with the milieu that it attempts to capture. In the kitchen with all its share of chaos, constant rush, and shared enthusiasm, the situations become synchronized with the rhythm of the restaurant world. The noises of pans and people along with insistent shouting build those bits of the show’s drama that are increasingly frustrating as well as addictive. 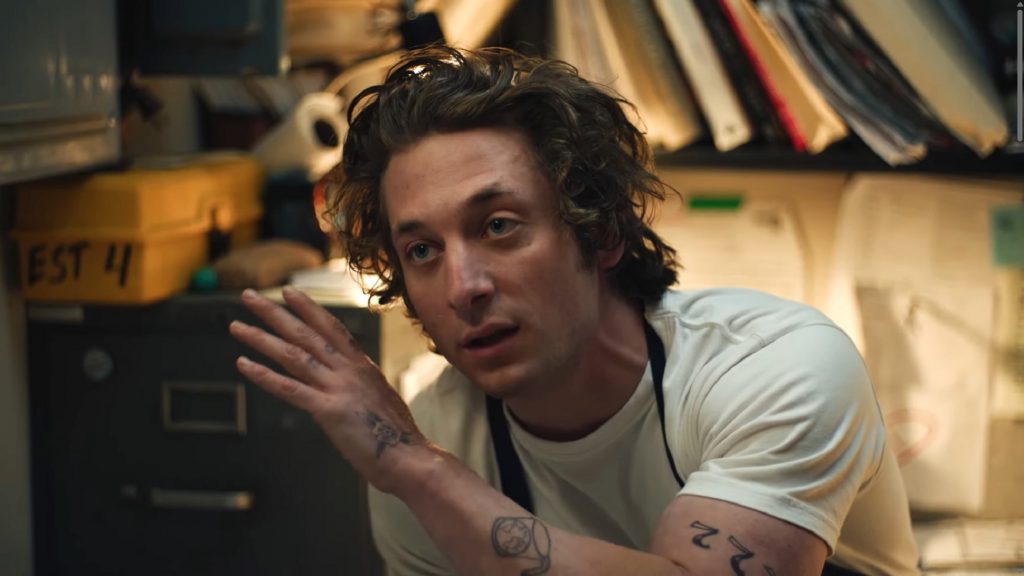 Speaking about the show’s narrative, when Carmy comes back to administer the Sandwich shop, he needs to get accustomed to the staff and their way of doing things. The minor adjustments that he makes or needs to make in order to work in the small store further clarify the writers’ understanding of the ins and outs of the restaurant world in a manner that is raw and the one that seems completely organic. The distinct personalities of the people working in the kitchen showcase different age groups, genders, and nationalities along with their individual lookouts towards preparing food and specific mindsets. A woman who is used to working there for years needs to adjust to the ways of a young chef who takes charge of handling the day-to-day operations. An anxious baker needs to up his game and needs a constant boost of motivation to do his tasks. A pair of cousins have to find a system that works for both of them. The clashes and interactions between all these teammates bring so much energy to the narration and build the boiling pot of the show’s drama prone to naturally-occurring chaos.

Ebon Moss-Bachrach, who recently starred in Hulu’s The Dropout, gives an excellent performance as Carmy’s cousin and previous kitchen handler. Their interpersonal clashes add so much to the show’s emotional potency and our emotional involvement in its stakes. Besides him, Ayo Edebiri, Lionel Boyce, Liza Colón-Zayas, Abby Elliott, and Edwin Lee Gibson elevate the show with their skillful acting performances and fit seamlessly in their respective roles. The characters are richly designed by the creators to pull the audience into the drama without explaining away their lives with petty details. The lack of unnecessary exposition uplifts the show’s liking for realism.

Since the majority of the show’s narrative occurs within the confines of the congested kitchen of an old-school Chicago sandwich joint, The Bear becomes successful in authentically building the claustrophobia associated with the milieu. The kinetic energy is built with the members constantly in the rush of doing something. There is always something more to do and no time to breathe in the cramped-up spaces. This constant sense of pressure from this Christopher Storer-created drama makes it a classic case of bringing authenticity to storytelling. The way in which The Bear pulls you into its universe and puts you right into the world of kitchen lingo without explaining away in detail, what any of it means, is what makes it thoroughly impressive.