Mike Leigh is one of Britain’s greatest living film directors whose cinematic world-view has permeated characterizations and situations, providing the viewers with renewed preconceptions of realism. His uncompromising study of everyday Britain is rich, awful, platitudinous and hopeful in equal measures. His films tackle complex human emotions, dilemmas and the consequences of the choices made by the characters. He infuses humor within the narrative so effortlessly that it serves as a pivotal aspect for defining the characters inhabiting the milieu of his films. Since his debut into the world of feature filmmaking in the early ’70s, his approach to cinema as a realist-social-observer has earned him the reputation of one of the best contemporary masters of human drama. His screenplays portray the psychological insights and understanding of human relationships and integrate complex themes, styles and dramatic situations into an engrossing whole, which introduces the spectator into a new awareness of the predicament of the British citizens.

He is an alumnus of the Royal Academy of Dramatic Art and the London Film School and drew inspiration from filmmakers like John Cassavetes, the French New Wave directors, and the Living Theatre. Over the years, he has developed a unique style of writing, directing, and designing. He allows his films to marinate and emerge organically and creatively over a long haul of brainstorming, improvisation, and rehearsal. In this process, he collaborates with actors and technicians equally.

He is the only British filmmaker to date who has won the Palm d’Or at Cannes Film Festival, the Leone d’Oro at the Venice Film Festival and the Golden Leopard at the Locarno Film Festival. So far, he has been nominated multiple times for the Academy Award. I have opted for the following ten films for discussion of this listicle. And the reason is: these ten films have challenged the critical privileging of realism in the histories of British cinema and stand out for the narrative convergence and diffusion within the domain of global filmmaking.

So, here are ten essential Mike Leigh films for every cinephile: 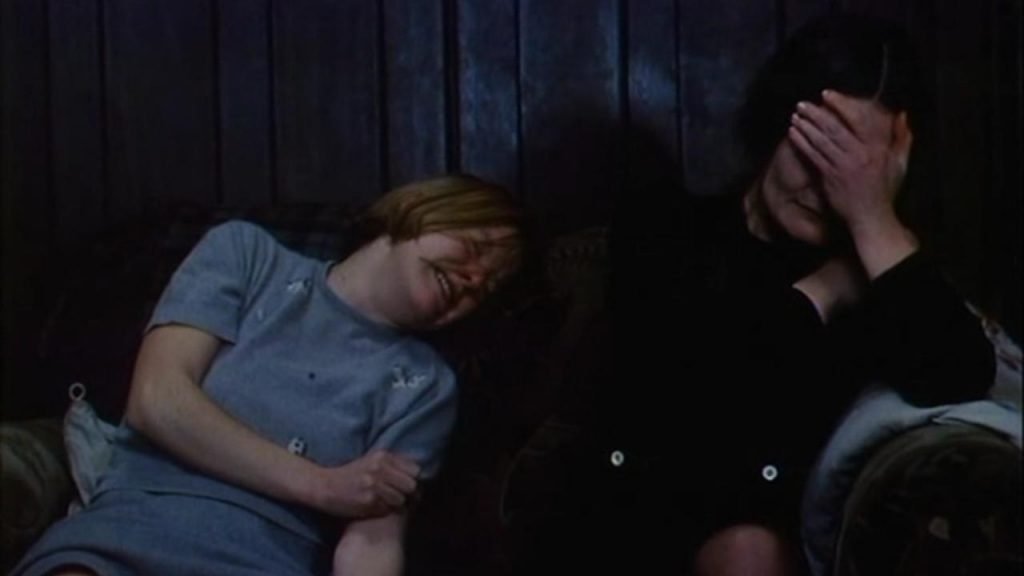 Based on a 1970 stage play at the Open Space Theatre, London, the film’s treatment is subtle, blended with comic moments. It’s also laced with heartache and disappointments. Through the uncompromised framing and keen observation, Leigh narrates an artistic examination of the weight of a battered soul that evokes compassion. The slow pace of the film helps to explore the emotion and stillness in life of Sylvia. It mirrors a wide range of psychological depth.

In his oeuvre of filmmaking, this is the only Leigh’s film, which radically overhauls the relationship of image to form with a singular objective of creating a visual and formal milieu. The film won the Golden Leopard Locarno International Film Festival in 1972. 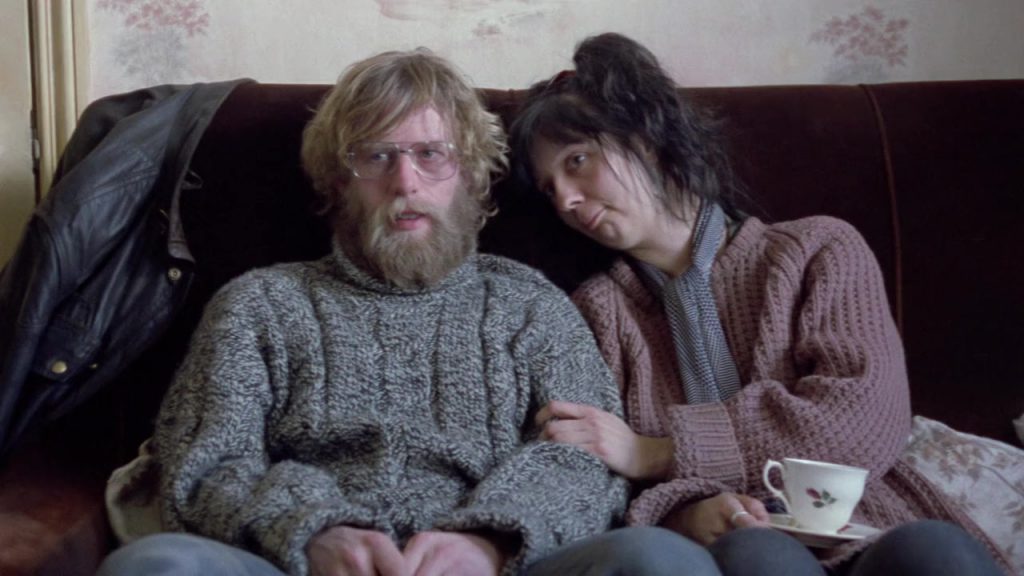 Mike Leigh’s third feature film depicts the harsh realities in the lives of two working-class British citizens, Cyril (Philip Davis) and Shirley (Ruth Sheen), during the Thatcherite tenure. They reside in a battered and rickety apartment at the King’s Cross, London. They earn their livelihood by doing low-paid jobs. Despite their poverty and sufferings, the couple shares an honest and amicable relationship.

The other characters in the film include Cyril’s mother Mrs Bender, (Edna Doré), who is a widow and lives alone, the pretentious sister Valerie (Heather Tobias) and her philandering husband Martin (Philip Jackson). Shirley wants a baby, but Cyril is reluctant due to Marxist theories’ influence. As the narrative unfolds, Valerie stages a surprise party for Bender’s 70th birthday that ends in a disaster from start to finish. But Shirley tries to bring back the situation to normalcy.

Leigh’s immaculate observation of the lives of the working class is depicted in the quotidian activities of the characters, as they try to fit themselves within the societal structures and at the same time keep a balance with their familial bonding. At the European Film Awards, the film won the Best Actress, the Best Supporting Performance and the Best Composer award. Leigh won the FIPRESCI Prize at the Venice Film Festival, 1988. 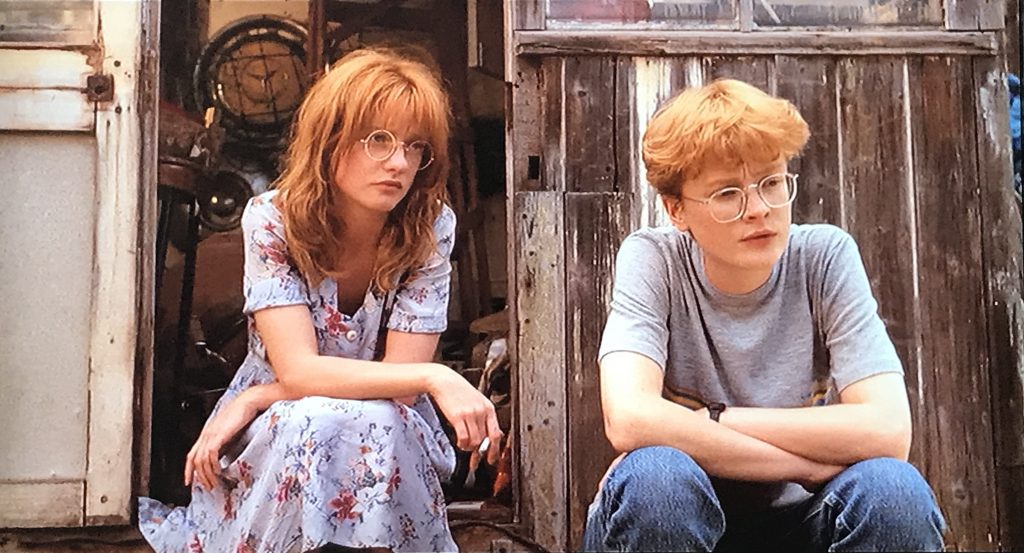 Leigh’s third theatrical feature film conjures up the end of the Thatcher era and as the country is on the brink of a new beginning. The characters in the film reside in suburban London and comprise twin sisters Natalie (Claire Skinner) and Nicola (Jane Horrocks) and their blithe father Andy (Jim Broadbent) and buoyant mother, Wendy (Alison Steadman).

The plot revolves around the family members harboring a secret and the aftermath of its revelation. Simply put, the film is an evocative slice of life. Leigh yet again displays his acumen in depicting the working-class malaise shaped by routine directly and honestly, never losing his hold on realism. The sweeping success of the film validated Leigh as a world-class filmmaker and paved the way for his innovative cinema that reached the widest audience across the globe for the first time.

The international success of the film is one of the key milestones in his career. The film garnered multiple awards. At the Bodil Awards, it won the Best European Film; the London Critics Circle Film Awards bestowed it with British Film of the Year; the National Society of Film Critics Awards honored it in three major categories-Best Film, Best Actress and Best Supporting Actress. 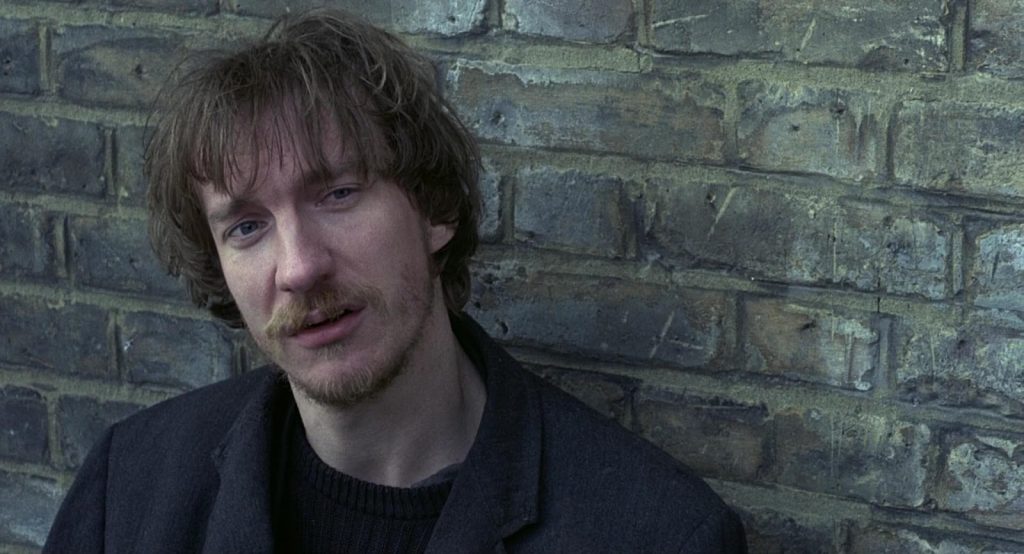 The film involves a cynic and an idealist character Johnny having complex traits and confusing motivations. Throughout the film, Johnny remains a frustratingly nocturnal mysterious Mancunian character whose behavior is difficult to comprehend.

He is a vagrant whose anger against the system drives him to do things unacceptable to people close to him. His character has grey shades, and despite that, viewers keep rooting for him, expecting that he will amend his ways. Leigh’s understanding of his characters shows remarkable restraint, employing a minimalist approach that hints at, rather than displays, their emotions.

Naked is a precisely paced, sensitively performed drama that speaks volumes about the growing distance that modern urban living is putting between people who would otherwise have so much in common. The film vexes its viewers with a question, what it means to be homeless? The film ruminates on the existential meaning of life. David Thewlis won the Best Actor award and Mike Leigh as Best Director at Cannes Film Festival. 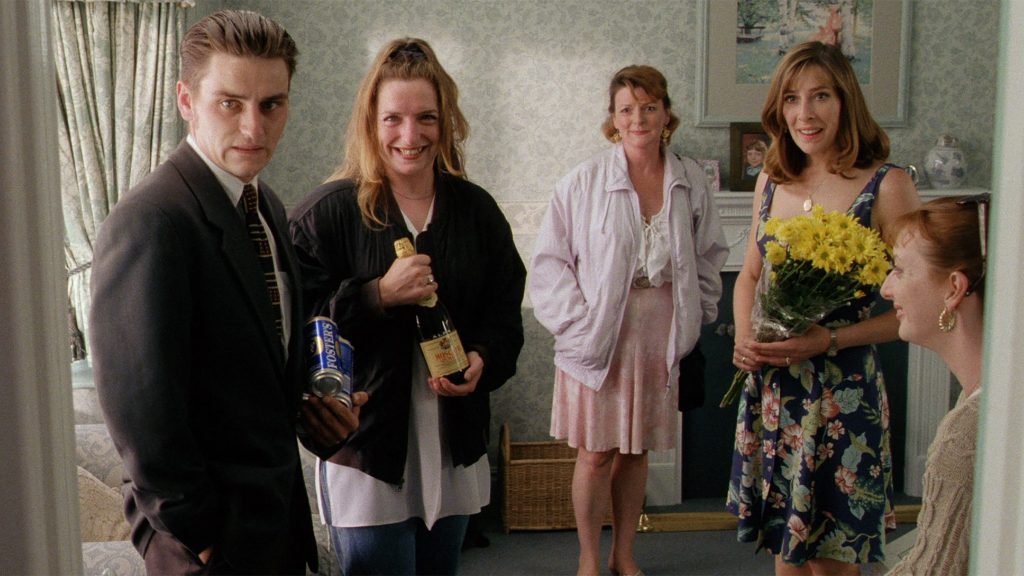 The film begins with the death of Hortense’s (Marianne Jean-Baptiste) adoptive mother. She is a successful optometrist from a black community. The conflict of the film arises from Hortense’s quest to unearth the whereabouts of her birth mother. Her pursuits lead her to Cynthia (Brenda Blethyn), a working-class woman. She lives with her illegitimate daughter Roxanne (Claire Rushbrook). The other characters in the film include Cynthia’s brother Maurice (Timothy Spall), a photographer by profession and his wife Monica (Phyllis Logan).

When Cynthia, for the first time, encounters Hortense, she denies the bitter reality. But later, she accepts the harsh actuality of her past and both bonds. The tension in the story reaches its peak when Cynthia invites Hortense to a family barbecue. While working with talented actors within the confines of rumbling relations, Leigh builds an unpretentious, gripping and credible narrative.

At the Cannes Film Festival, Brenda Blethyn won the best actress award and Mike Leigh the Palm D’or. At the 50th British Academy Film Awards (BAFTA), the film won the Best British Film, Brenda Blethyn Best Actress and Leigh won the Best Original Screenplay Award. The film was also nominated for the Academy Awards in five categories but won none. 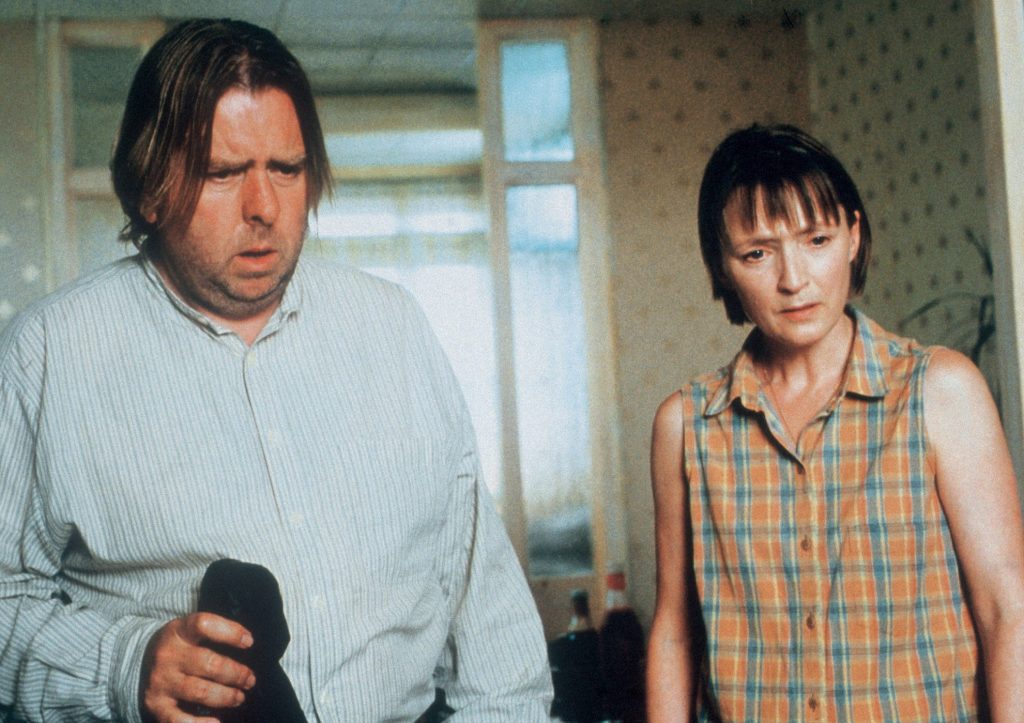 The film’s protagonist, Phil (Timothy Spall), earns his livelihood by driving cabs in London. He is somewhat philosophical by nature. His wife Penny (Lesley Manville), who works as a cashier in a supermarket, has lost the spark in their relationship. Their daughter Rachel works as a nurse looking after elders, and son Rory is a perplexed teenager.

The plot is put into motion when Phil does something that disrupts the equilibrium of his already troubled family life. The film feels like a natural extension of themes that Leigh has often explored in his films, regarding family, inequity, working-class issues and the unseen residents of a crowded Britain. The characters and their predicament are not merely mouthpieces for issues that interest Leigh. But these are fully realized people where relationships are put to the test at the moment of crisis.

The film was nominated for the Palme d’Or at the 2002 Cannes Film Festival. At the London Film Critics Circle Awards, the film won the Best British Film of the Year. The same year Mike Leigh was nominated for Best Director at the European Film Awards. 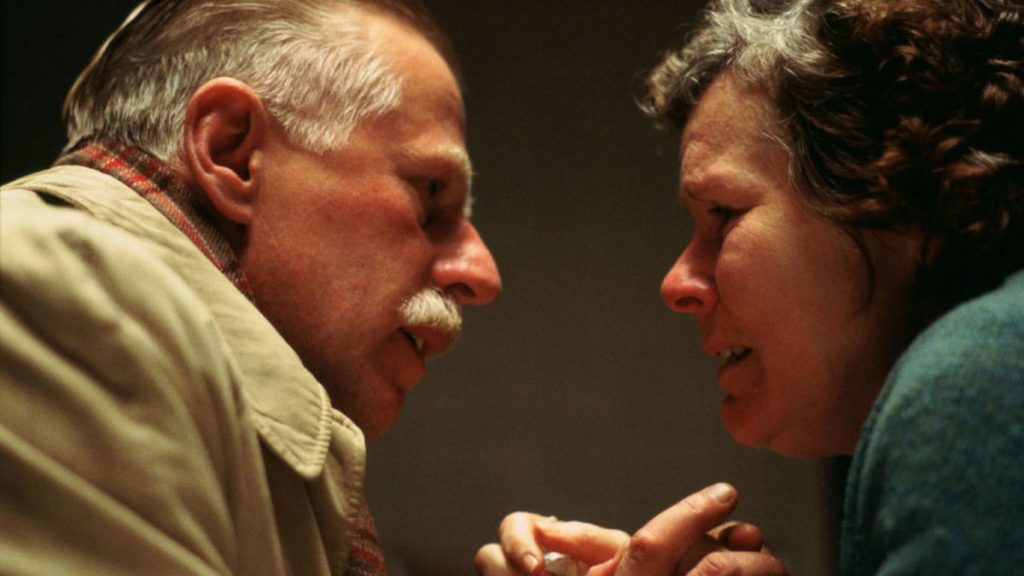 The film is set in England in the 1950s and backstreet abortions were considered illegal. But the protagonist of the film Vera Drake (Imelda Staunton) helps women to get rid of their unwanted pregnancies. Her family members comprising her husband Stan (Philip Davis) and two adult children Ethel (Alex Kelly) and (Sid Daniel Mays) are unaware of Vera’s clandestine job.

According to her family members, she is an affectionate wife and caring mother. But one unfortunate incident regarding the abortion incident brings her to the book and her family members face shame and humiliation in the society. Leigh delivers a poetic examination of human and social realities concerning people on the fringes of society. 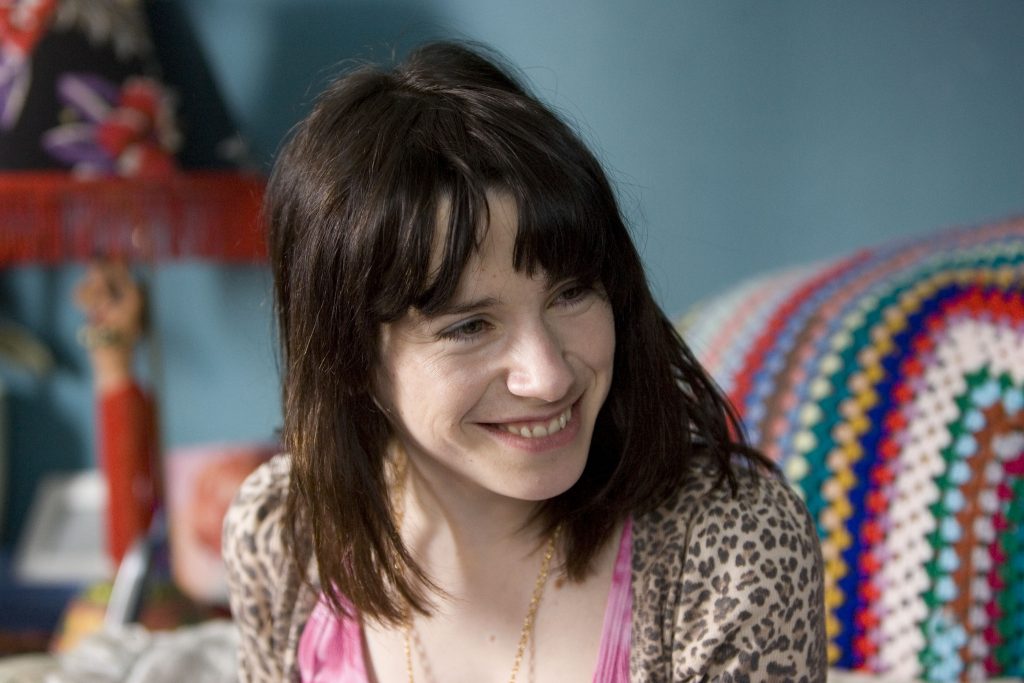 The film explores some of the key events in the life of our protagonist Poppy Cross (Sally Hawkins), within the span of the narrative. She is a teacher by profession, optimistic by nature and single by status. She shares her flat with a fellow teacher, Zoe (Alexis Zegerman) with exactly the opposite nature in comparison to her.

In the course of the narrative, she encounters several other characters and that includes a serious-looking instructor Scott (Eddie Marsan) and a social worker, Tim (Samuel Roukin). Leigh seamlessly blends the environmental behavior of the principal character in a poignantly accurate proportion to depict shifting human relationships in an urban scenario. 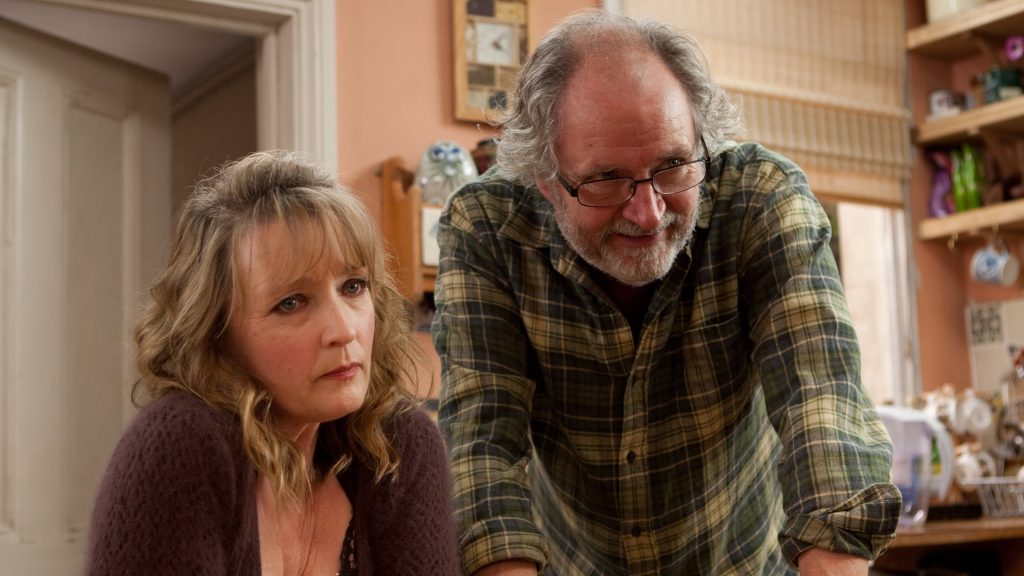 The film follows the life of two elderly happy couples, Tom (Jim Broadbent) and Gerri (Ruth Sheen), whose marriage has survived the test of time. Gerri’s best friend Mary (Lesley Manville) is a divorcee. She lives her life on her terms. She introduces Gerri to another friend Ken (Peter Wight), with the intention of a fling. But things do not turn out as accepted and what follows next in a span of one year is an internalized study of human situations and conditions coming to terms with multiple pressures in her life.

The film was premiered at the 2010 Cannes Film Festival where it competed for the Palme d’Or but lost it to Apichatpong Weerasethakul’s Uncle Boonmee Who Can Recall His Past Lives (2010). At the 83rd Academy Awards, Mike Leigh was nominated for an Oscar for Best Original Screenplay. 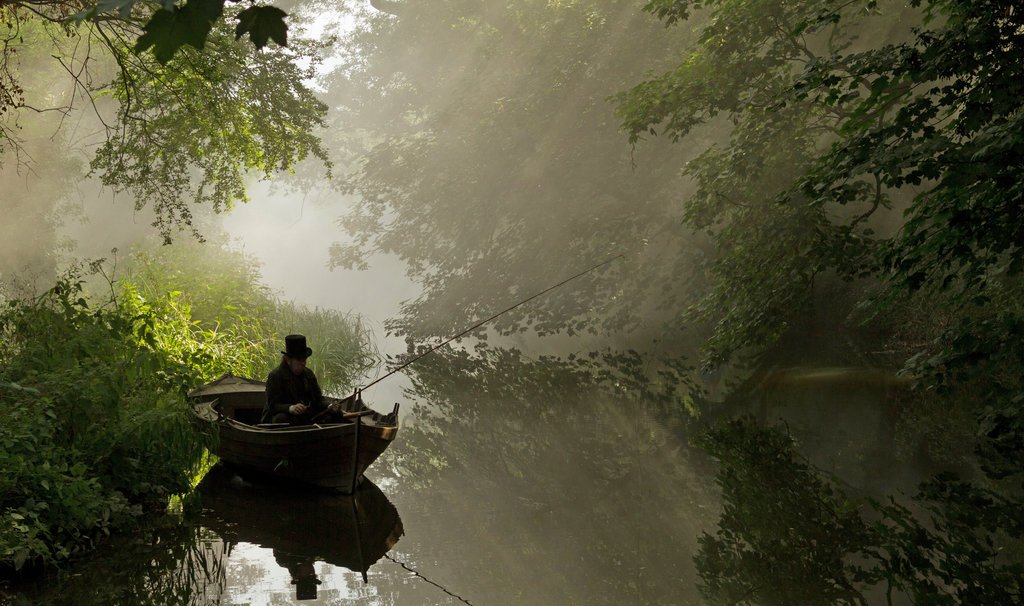 The film depicts a few critical episodes in the life of an aberrant British painter J.M.W. Turner (Timothy Spall), whose secret affair with Hannah Danby (Dorothy Atkinson), his dedicated housekeeper for forty years, and his career as an exceptional painter forms the crux of the narrative. Mike Leigh’s direction provides an innovative perspective of the internal landscapes of the mind of an artist. The film premiered in competition for the Palme d’Or at the 2014 Cannes Film Festival. Timothy Spall won the award for Best Actor and the cinematographer Dick Pope received the Vulcan Award. The film also received four nominations at the 87th Academy Awards and 68th British Academy Film Awards but did not win any.

Kasada Thapara (2021): A Collection of Short Stories Connected By A Hyperlinked Narrative