The Patient Episode 3 Recap: The Patient has definitely sprung a surprise with its sensible blend of exposition and elements of suspense. Although the former has taken precedence over the latter in the first three episodes, the ending of “Issues”, episode 3 in The Patient’s season 1, indicates otherwise. Until now, showrunners had great control of the story in a steady environment. With the entry of a new element, things are poised to change. Episode 3 had revealing details about Sam’s violent past and explained to some extent his behavior in the present. Steve Carrell has really dug deep to play Alan and bring out his own internal pain over losing his wife. He hasn’t truly behaved like a hostage, showing exemplary professionalism. The episode also gave us the identity of the occupant upstairs. Read our recap and ending explainer for episode 3 of The Patient on Hulu.

We pick up right from where episode 2 ended; the person descending the stairs. Turns out, it is Candace, Sam’s mother. But wasn’t she dead? I mean, both of Sam’s parents, as he had said earlier to Alan, had expired. So he lied about this as well. Is there any shard of doubt left before we start calling him a sociopath? The house is hers and Sam came to live with her after a gruesome split up with his partner, Mary. But one of the most surprising things about her entrance is the lack of surprise. Of course, she was expecting to see him downstairs but the stone face with a mix of nervousness suggests Sam had already told her he is bringing him there. This little detail in itself proves how protective she is of her son and will not easily give him even if he does something morally skewed.

As the conversation goes on, Candance is forthcoming about her admiration of Alan and the work he does. She read books of his, The Cactus and Mirage after her husband left her to cope. She found the book relaxing and they helped in her journey to overcome the tectonic event in her life. Although she insisted that Sam read it too, it did not have the same effect as it did on her. Instead, Sam tried to do “real therapy”, to which Alan replies, “This isn’t real therapy”. We know where this is going. Anyone taken hostage would normally be desperate for any person he sees other than their captive to call the authorities and help him out. Alan does so but Candace is stout in her defense of her son. She says she does not indulge in Sam’s choices – including this kidnapping – but she will not rat out her son.

He needs Alan and she must give him a chance to improve himself. Candance believes Sam is trying his best to stop his impulses and create a new life for him. Alan must do his best to help “her baby”. At night, Sa arrives after work. Customarily, he brings food from one of the restaurants he has inspected. Pho, it is this time and it is “unlike Alan has ever had”. Alan intimates Sam of his meeting with Candace. Sam is so sure of her mother standing up for him that he doesn’t even have a change of expression. He also explained why he didn’t mention her. The idea of mothers in therapy is almost like an obsession. In some way or the other, professionals have a tendency to attach every problem with something or the other to do with the patient’s mother. But Sam makes it clear his issues have nothing to do with her.

Alan once again asks Sam to take a leap of faith with him and unchain him. He makes his case by saying Sam would be able to overpower him quite easily given the disparity in their physical prowess and age. Alan does not pose a physical threat to Sam but the young food inspector isn’t ready to do that yet. The therapist accepts defeat – for now. The session starts over dinner. He asks about Sam’s father, who used to beat him. Sam still has nightmares about his abusive father mercilessly thrashing him around the house. He even “left” the family when Sam was around fourteen. For some reason, I do not buy this narrative. I don’t think he “ever left” if you catch my drift. Hopefully, there will be a sensational reveal later in the season. 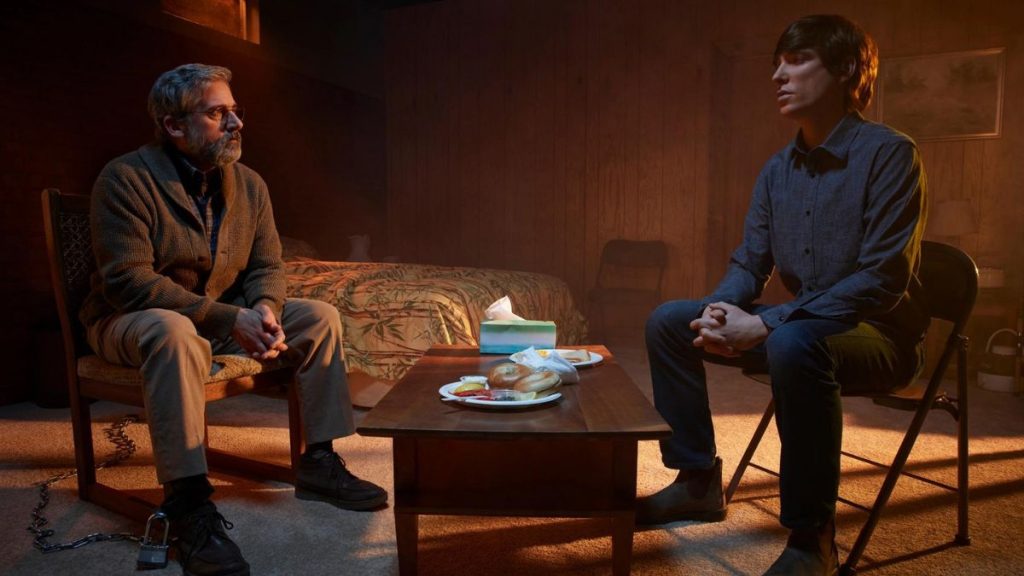 Sam recounts one incident when his father got a deal on large amounts of grout for the kitchen and the bathroom. When he said to him to break it, Sam didn’t understand. He indeed had no way of knowing. And started beating him. Sam also puts in a word about her mother – how she took on the responsibility and stood shoulder to shoulder with him in all of this. Alan has another flashback when he meditates the next day. It is Ezra’s marriage. The Rabbi announces the chatan’s mother will make a toast but it turns out Beth is going to sing a song. The Rabbi sternly reminds her that women do not sing in their family but she persists and gets up on stage.

Disapproving whispers spread around and people start getting up and leaving. Alan and Sam have another session later that day about the manager. Sam reports that there isn’t much change in his feelings towards the manager and Alan expresses an idea. He suggests that Candace should sit with him in the next session  – family therapy. This move will be beneficial for both of them – to deal with both of their traumas. Sam is protective of his mother and says she has had enough but Alan says it will be helpful. The journey ahead for Sam will be easier if Candace is around. The next day, she is there with Sam. She starts describing Sam’s father. Her disposition is calm and understanding.

Candace explains how she and Sam took refuge in one another and stood against his father. He could be a bit too intense at times. Alan asks Sam to help his mother by reminding himself that he will not act on his violent impulse and in this way, protect his mother. He mustn’t become a source of pain for her anymore. She asks him if he would do it and Sam reluctantly agrees. Sam is back with dinner the next day. “Pastitsio”, is what’s next for Alan, who really enjoys the dish. Sam says he went back to the place with the manager but unfortunately, there is still no change in how he feels about him. Alan’s presence was supposed to be a test for Sam – if he is really helping him. Seems like there is some progress but more work needs to be put in. Sam explains why he does what he does to people.

It comes from a place of trauma with his father. Sam likes to “discipline” people who are not kind to other people. His father did the same with him and now, he has the same tendency of lashing out and going to extreme measures to get people back “in line”. There is some commotion upstairs the next day. Alan calls out for Candace but she does not respond. In another flashback, it is revealed how Beth went ahead with the song at the wedding, much to Ezra’s dismay and that of his in-laws. She was this defiant, rebellious kind of woman with a strong will. But it is a happy memory in Alan’s head, and that is all that matters to him. The flashback is bookended with Beth breathing her last. Alan, his daughter, and Ezra sit around her as she succumbs to a terminal illness.

It is time for dinner again and Alan gets up, waiting to see what Sam has brought him this time. Alan’s dinner routine has been quite extravagant and out there recently with Sam bringing him all kinds of delicious foods. But this time, the cat has dragged in something really horrible. It is the manager, his hands, legs, and mouth bound with tape. Sam drags him inside to the other room through the rain. Not a word is exchanged between him and Alan, who watches in shock and anticipation of things to come. So, that is the ending I was talking about that would for once bring strong undercurrents of suspense to the story. It had been lacking till now as the conversation and character development took more importance.

We must ask ourselves this question – is the therapy really helping him, or is Alan being disillusioned because of the situation he finds himself in? Nothing has really changed with Sam. He still has the same violent thoughts and has even acted on them to kidnap the manager. Yes, he hasn’t murdered him, yet, but what is to say that will not change going ahead? Alan is treading on a slippery slope and his professionalism isn’t helping too much. Will the situation change going ahead? Tune in next week to find out!