The Birds (1963) is a criticism of society’s manhandling of nature but at its center, it’s essentially a family drama about acceptance.

The Birds (1963) Analysis: A rich San Francisco socialite Melanie Daniels (Tippi Hedren) and a criminal lawyer Mitch Brenner (Rod Taylor) share a brief moment of playful and flirtatious disagreement at a pet shop in town. She is a practical Joker, with a history of things going wrong, he disapproves of practical jokes. She came to buy a talking Mynah, he was looking for a pair of friendly lovebirds but neither of the two got it, instead, they found each other. He leaves the scene with a blushing smile on his face. She runs after him and manages to note down his car registration number. That is a beginning of a beautiful acquaintance.

Shortly after, Melanie finds out Mitch’s address and decides to leave a pair of lovebirds at his doorstep as another one of her practical jokes. Upon reaching there, she finds out that Mitch spends his weekends at his mother’s house in Bodega Bay. Desperate to complete her gag or plainly because she is enjoying this flirtatious acquaintance, she drives down to Bodega Bay, pursuing the man to his mother’s house. She wants to complete another joke, sneak the birds into his house and leave without meeting the man. But before that could happen, Mitch spots her and they meet again.

Related to The Birds (1963): The Emotional Minefield of Alfred Hitchcock

Eventually, things go bad when large flocks of birds turn violent and start attacking the people of the community. There doesn’t seem to be a reason why the harmless creature would attack humans. Decades later, there are still theories about what all of it means and to each their own, there are many ways in which Alfred Hitchcock’s The Birds can be/has been read and most of the theories make sense.

Here is what I think; First of all, The Birds (1963) is an allegory of nature turning violent, when you treat it as a joke. Melanie Daniels’ compulsion to do practical jokes is a bit far-fetched. At first, she tried to leave a pair of lovebirds in the hallway of Mitch Brenner’s San Francisco apartment. Then when she found it that he will return only after the weekend, she drove down with the pair of caged lovebirds to a new town. Not just that, only to add a little bit of theatricality to her prank, she took a boat to Mitch’s house with the lovebirds endangering the creature’s life. This meaningless and petty joke that involved Birds is one of the many ways in which humans humiliate the creature. Caging them and moving them unnecessarily treating them as mere prop in a gag.

But apart from the nature allegory, The Birds (1963) deals with one other important theme. The film deals with the relationship between Mitch and his mother, Lydia (Jessica Tandy) and how, according to her, there is no room for Mitch to indulge in a romantic relationship. Having lost his husband 4 years ago, Lydia is extremely protective and possessive about his son, the only man in the household. She is tangentially passing through what we may assume as the opposite of an Oedipus Complex, in which a mother is attracted towards her son and finds it tough to share him with anyone. 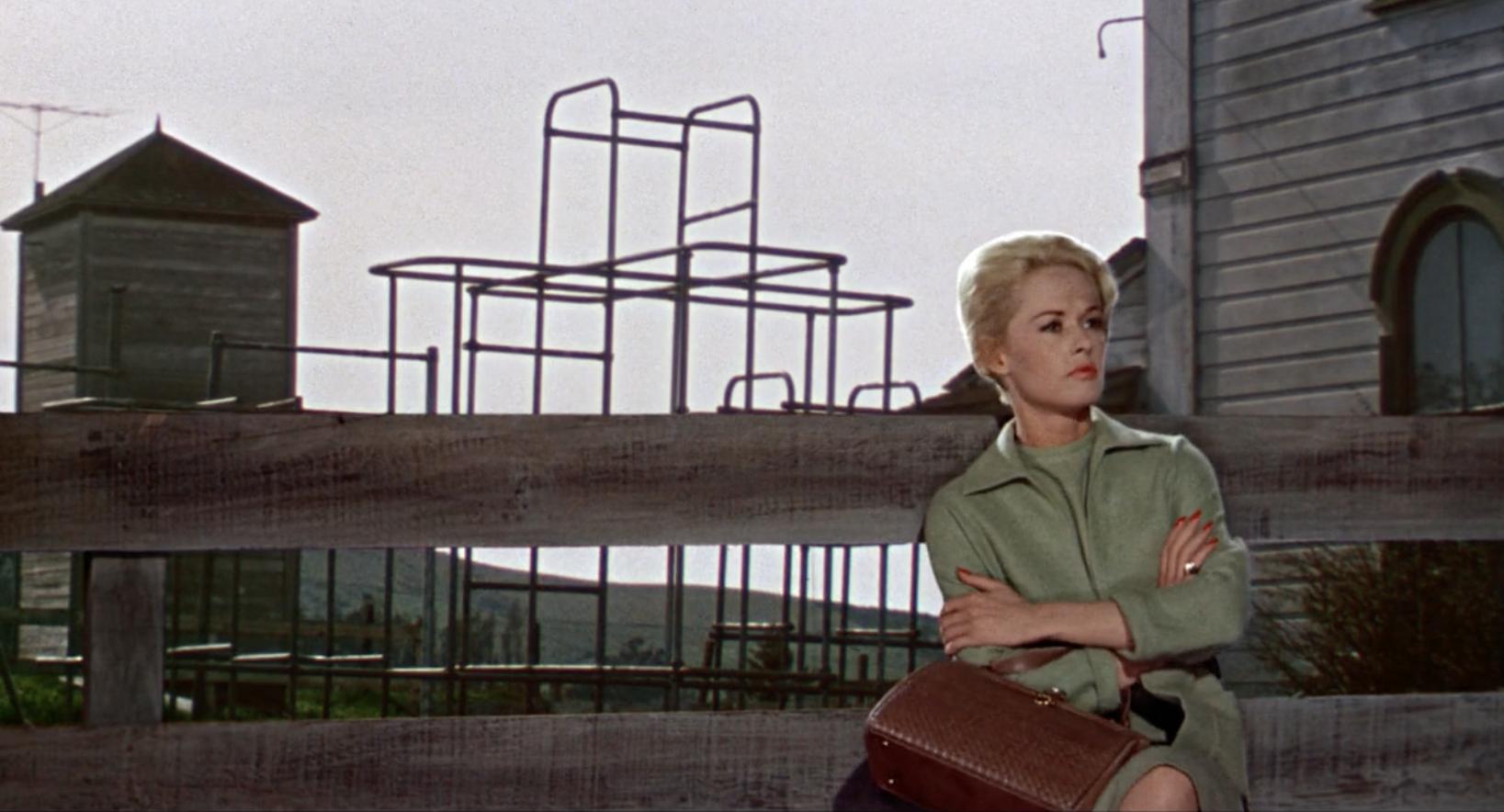 The first time a bird attacked Melanie, was right after she entered Mitch’s house. After planting the lovebirds inside his house, she left on a boat and as she was nearing the shore, she was attacked by a gull in the head. At that point, Lydia hadn’t even met Melanie, but yet she was attacked by a bird. It was symbolic of how Lydia’s possessiveness is also subconscious, which is beyond her control because we see that she is equally terrified by the bird attacks. She clearly wants to overcome her insecurities.

The first attack marked the beginning of a foreign entity entering the territory of a mother and her possession. When Mitch invites her for dinner, and she decides to spend the night at Bodega Bay, there is a precursor to the next attack. A Bird drops at Annie’s doorsteps where Melanie was spending the night as if warning her to go away before it gets intense. Nobody read the signs, as she attended Cathy’s birthday the next afternoon when a major attack finally happens. These are all signs that Melanie is not a welcome guest in this territory.

Subsequent Bird attacks continue to happen, wherever Melanie goes next. At the school, at the diner and finally when they rush back to Mitch’s house. Another thing to notice is that the birds do not attack Mitch, when he isn’t protecting Melanie like when he goes out to get the car. But earlier when he was blocking the door and the windows, that prevented the birds to attack Melanie, they attacked him in order to get to their target.

The final bird attack explains this theory well. Melanie ends up being trapped in the bedroom upstairs with the birds. She blocks the door and let the birds attack her as long as they don’t get to the rest of the family. Melanie survives this attack when Mitch and Lydia help her but this was a sacrifice that won Lydia’s trust and freed Melanie from this metaphorical violence.

In the closing scene, Mitch gets the car, an injured Melanie is no longer a foreign threat and Lydia’s insecurity is behind her now as she gives Melanie a motherly affectionate hug. At this point, the birds cease to attack as the family unit, that also includes Melanie now, drives away. The Birds is a criticism of society’s manhandling of nature but at its center, it’s essentially a family drama about acceptance.

How to Bring Screenwriting Into the Classroom