The trailer for The Chalk Line (Jaula) may give off a horror film vibe. The opening and the background score, too, may lead viewers into believing that the next 107 minutes will be an exploration of the often-seen horror film trope. A young child discovered with no one being able to understand her. With no solution found, the child has someone take pity on her and gets adopted, following which havoc ensues. This idea comes across in how director Ignacio Tatay presents the film’s first act. However, as the second act concludes, we learn that horror is a reality and that monsters are present in everyday life. They are the ones the protagonists consider friends, rather than supernatural beings.

The film begins with Simon and Paula driving at night and finding a scared girl on the road. She doesn’t speak, but she appears weak. Their timely action saved her per what the hospital staff told them.

As the days pass, Carla has drawn a chalk line around her bed and thrashes violently when taken out of her Jaula (the film’s Spanish title). With no hopes, except for Paula, with whom Carla connects, the girl seems done for. Paula decides to take Carla in, and she opens up a bit. This gives the adults some clues to decipher her origin and trace her home. We get a hint that Simon and Paula may have issues due to her past. The story also aids this, but a sinister reveal pops up just over the hour mark.

Carla does disappear for a few minutes, but we get to see what the truth behind it was. Beyond the hour mark, the director presents the truth from the villain’s side. Eduardo releases Carla into the road and then tries to abduct her once she is back to full health. This release may have been due to the need to get her medical attention without drawing any questions about their connection.

The young girl’s disappearance was actually a botched abduction attempt, as Eduardo couldn’t sneak her out of the house with Simon and Paula around. It was also revealed that he planted shards of glass in their food.

Paula gained entry into her neighbor’s house and became a captive herself. She remained defiant and motivated Carla to escape. The young girl ran into Eduardo’s wife and was carried back into the house of horror. The next morning, she calmly made breakfast for her husband and served it to him. Instead of joining him, she walked out as the police entered and took him into custody.

A while later, Paula and Carla connected via a video call. They were far away from the Spanish locality, which served as the scene of their trauma. The call also took place after a while as Paula’s shoulder area seemed fine and Carla, who had longer hair, seemed happier and healthier. 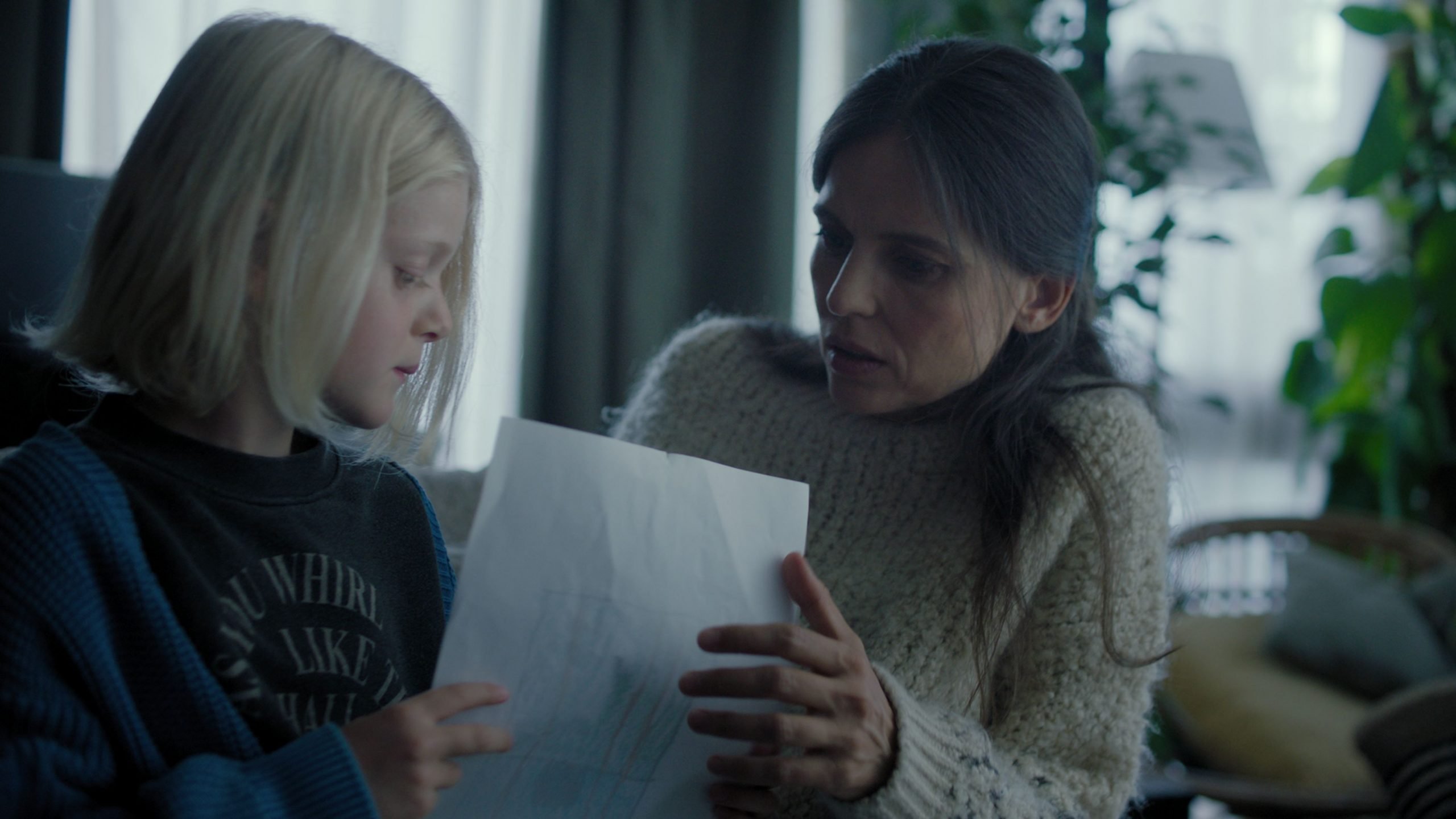 The ending saw Paula piece the puzzle together and call the cops. However, she decided to apprehend Eduardo herself and took a pickaxe in the collarbone for her troubles. Imprisoned in the cellar, she remained defiant and sent Eduardo on a wild goose chase. Paula then urged Carla to escape and fought off her captor long enough for the young girl to escape and shut the cellar door.

Unfortunately, she ran into Eduardo’s wife, who calmed her down and then carried her back into the house as she struggled. The camera then cut to her staring at Eduardo in bed and setting out a few demands. She made breakfast and walked out of the house as the police burst in and apprehended him. They even began the search for the cellar, but Carla and Paula weren’t within it. Simon (Paula’s husband) watched this raid from his house with a cathartic look.

What was Carla’s actual identity?

The film showed that Carla knew German, leading Paula and the authorities to search for missing children across the continent. Paula zeroed in on one missing case. A girl named Ingrid. She recognized something else as well; something she had seen Carla make. As she went to confirm her suspicion, Paula picked up another clue and entered Eduardo’s house.

When tied to a post in the cellar, Paula recognized Carla’s fear of a cupboard (and the name she gave the object) and asked the girl whether her mother was Ingrid. Carla’s silence gave her the answer and provided something deeply disturbing to the audience. Eduardo abducted and fathered a child (Carla) with his captive.

Was Eduardo’s wife in cahoots with him?

Eduardo’s wife seemed complex, as she initially had a look of shock. Audiences may have expected that to represent her horror at piecing together the puzzle that her husband was the guilty party. She may have not even known about the dastardly scheme and been shocked at Carla’s reappearance. Her action to pick up the child and carry her back proved that she knew of the plan, but things went blank, leaving it open to interpretation.

The film didn’t explicitly show her taking Carla back to the cellar. It didn’t show any sign of her even freeing the trapped Eduardo and Paula from down below.

Her words to her husband the next morning showed that she didn’t turn him in only for the sake of the family name. This, and another action later in the film, showed that she was not aware of Eduardo’s actions.

Why did the cops enter the house if Eduardo’s wife kept quiet? It’s simple. She didn’t keep quiet after thinking things through. The middle-aged woman decided to do the right thing and turned in her husband, as he had been unfaithful to her.

When did Paula and Carla leave the cellar and house, respectively?

The exact time Paula left is uncertain. It remains up to the audience’s interpretation, but one must assume that Eduardo’s wife freed them. This is because Eduardo is shown in his bed the next morning. There is no way he could have undone the bolt on the cellar door from the inside. Furthermore, it remains tough to envision a scenario where Carla overpowered a full-grown woman. Had she done so, her first instinct would have been to exit the house once more and summon Simon.

A possible answer is that she took care of Carla and Paula at night, freed them, lulled her husband into a sense of security, and then let justice prevail.

Paula wasn’t in the cellar in the morning, as Simon and a few others were watching the raid play out from their window. It could have been a coincidence that the neighbors saw chaos and decided to watch. However, the presence of the counselor, Simon’s decision to not go out into the road, and his cathartic were clues that he may have been aware of the events the night before.

Who was Carla staying with in the climax?

After all the mayhem, Carla was revealed to be happy and healthy in Germany. She is staying with her grandmother. Now, who is this grandmother? Carla, a child of Eduardo and his captive, Ingrid, would naturally have gone to Ingrid’s mother. This acceptance showed that they kept hope that their child would be back; once they realized that it wouldn’t be possible, they took in her daughter (their granddaughter).

How did Paula learn that Eduardo was the villain?

Paula connected with Carla and learned that she could communicate in German. She used a translation tool to figure out the meaning of the words, and her hunt led her to the missing German children’s section. Paula found one clue, but then realized that she had the entire truth in front of her all along.

Carla’s drawing of the window was that from Simon and Paula’s house. It was from the point of view of her bed, with the focus being Eduardo’s window. He kept a watch on her, which was represented in black in the sketch. When Paula sat where Carla did, within the chalk box, and held the sketch before her, she comprehended the message within. The young girl had blackened the exact spot Eduardo stood at.

Where to watch The Chalk Line

Terrifier 2 (2022): Movie Ending, Explained - Is there a sinister connection between Sienna and Art the clown?

The School for Good and Evil Soundtrack: Every Song Featured in the Netflix movie