Bleak and uncompromising, Leah Purcell’s debut feature film directorial, The Drover’s Wife: The Legend of Molly Johnson, in which she also stars as the lead, is a grim Western. Unlike the eponymous character in the Henry Lawson short story, ‘The Drover’s Wife,’ from which it takes its cues, Molly hasn’t the privilege to dream of fashion photographs. It isn’t that she’s bereft of a capacity to dream. In fact, a significant amount of time is dedicated to her dreams and visions, yet they hardly represent some cosmopolitan life worth idolizing for a developing country woman. There are far darker things to worry about in Molly’s world.

The feminist lens of the film comes as quite a surprise if one goes in unaware of what the film is about. Sure, there are undercurrents from the beginning. Louisa’s desire to start a monthly journal for women or the stoic way Molly deals with her daughter’s death at childbirth, as if the occurrence were no more tragic than too much salt in the dinner. Yet Purcell makes these seem incidental, the latter being an indicator of how harsh her life generally has been. The willful misguidance, making us believe the real story will deal with Molly possibly having to protect a fugitive, is entirely sidelined once the real concerns surface. There’s a deftness to how Purcell does this in the tripartite scene where we are informed about Molly’s past and present.

The Legend of Molly Johnson Review:

‘The Drover’s Wife’ is blunt, sometimes manipulatively, in depicting what plagues a lawless land. What initially appears to be a look at a brutish society, necessarily so in its attempts to create a home out of hostile lands, becomes a trenchant critique of institutional prejudice and violence as an excuse. The dull palate has a worn sense to it, dirty and tired. Here, bigotry reigns supreme. Justice is sought for opportunistic purposes. The gendered divisions are extraordinarily skewed. The sparse violence isn’t peppered over the film to add grit but is shown as the consequence of the evil that men do.

Louisa’s journal for women is a product of her grief at her sister’s death, a victim of domestic abuse. She’s a character, even if minor in terms of how long she appears, essential in humanizing a place like Everton and bringing it out of the Dark Ages. Played by Jessica De Gouw, her conviction is visibly believable as she sets out on her mountainous task. Sam Reid, who plays Sergeant Klintoff, gives a strong performance as a man caught between his duty that he knows to be wrong and his moral compass. His reluctance is delivered in a wonderfully subtle fashion in his final appearance in the film through a painful smile that reassures us of the goodness in his duality. 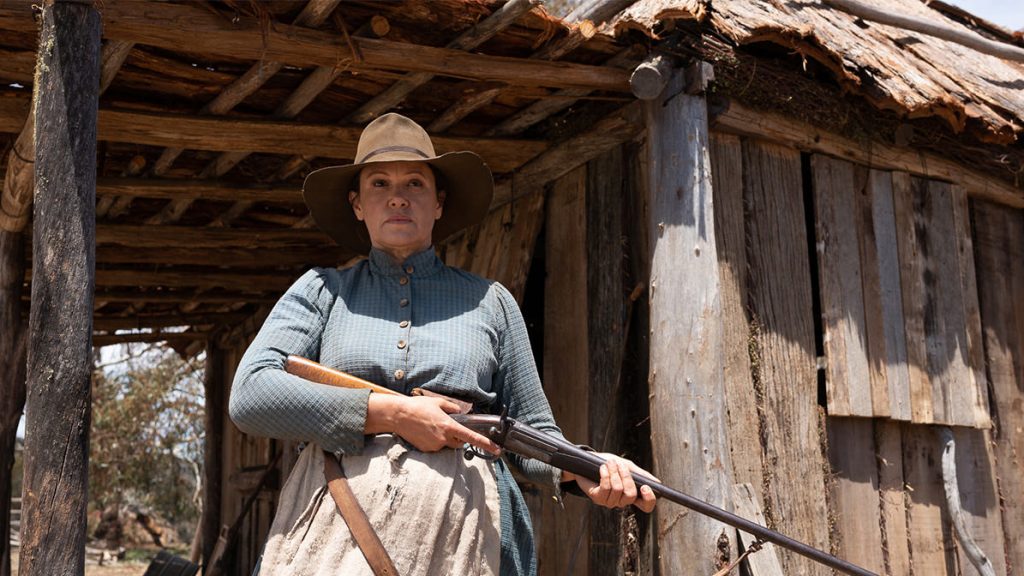 The film’s weakest point is its music and incoherent nature. Individual tracks, which go from the standard twangy tunes of Spaghetti Western soundtracks to a swelling ballad, are outstanding. Yet no track seems to play twice or act as a motif. Instead, the cornucopia of varying pieces of music gives the film a lack of any sonic resonance, instead coming across as a selection of pieces that were thrown into it because they sounded nice and fit the scene well. It may seem trivial, but it has a discordant quality as the music is too important to the moment it’s depicting yet seemingly dispensable to the larger picture.

As an Aboriginal woman, the story of ‘The Drover’s Wife: The Legend of Molly Johnson is certainly personal to Purcell. The unrestrained sentimentality at the end shows an unabashed desire to tell this story without any pretension of objectivity. This works especially well because of the relief it provides from the endless cruelty before it. A revisionist Western that has a touch of Ford in its thematic attachment to its arid landscape, Purcell’s debut is an extremely compelling one, telling a kind of story that may well have been true and consequently too much for history to accommodate, hence elevating it to the deserved status of a legend.

What is Molly’s lineage?

Molly’s reaction to being told that her mother was Black informs us of the fact that she had always been under the impression of being a white person. In reality, her mother, Black Mary, also known as the ‘whitest Gin’ (a derogatory name for an Aboriginal), was a Ngarigo woman. In fact, Mary was half Ngarigo as her father was apparently Charles Edwards, a member of the prominent Edwards family that founded the city of Everton and played a crucial role in its development. Molly’s father was a drover and a Scotsman named Jock Stewart. Mary and Jock fell in love and had Molly as their daughter, in isolation from the rest of the community owing to the taboo nature of their relationship. Molly got married to Joe Johnson, a man her father chose to ensure that she would have a fulfilling life without an absence of love, companionship, or security.

Who is the red-haired woman?

Though never explicitly mentioned or even talked about, the red-haired woman is quite possibly Molly’s mother, Black Mary. Miss Shirley described her as a cocksure woman who held her head high ties in with the red-haired woman’s proud, upright appearance. The two infants she holds in her hands are Molly’s two children who died at childbirth, making Mary akin to their guardian, ferrying them to the afterlife. At the end of the film, she appears at the mouth of the cave and then enters it, the one where the children find shelter, making her continue looking over Molly’s family.

What happened to Joe?

Joe Johnson, the eponymous drover, is a vicious, abusive man who constantly cheats on his wife and pathetically treats her. On the night of Danny’s eldest son’s birthday, an altercation breaks out between Molly and Joe after she catches him red-handed with a prostitute. It enrages Joe, who gets extremely violent with Molly, leading the latter to shoot and kill him out of anger and in self-defense as Danny looks on, wishing for his mother to do so. Following this, Molly buries Joe in their yard, underneath the wood heap in a shallow grave, as she didn’t have enough time to take care of the corpse’s disposal before her children woke up.

Molly’s narration of the story of her life begins with her father and mother’s love story, thereby showing her acceptance of her heritage, even her pride in her parent’s love for each other, something she didn’t have with her husband despite what was supposed to be a comfortable marriage, unlike her parents. She is eventually hung to her death for the three murders she committed, that of her husband, her husband’s friend, John MacFarland, and Trooper Spencer Leslie. Louisa publishes Molly’s story in her journal, ‘The Dawn,’ for people to read and know about the suppressed suffering of women. Danny and his siblings, who escaped when John attacked Molly, reach the cave Yadaka spoke of. This is a shelter with food and clothing for the winter and a place where Ngarigos come to live as a community once spring arrives.

Intercut with Danny’s arrival at the cave is a wordless scene set in the future in which Danny plays with his kids on the porch of their home, Molly’s home no longer rundown but an actual home of a happy family. He’s married to an Aboriginal woman who’s expecting another child. At the window of their home, he keeps a framed copy of her mother’s story as Louisa wrote ‘The Drover’s Wife: Molly Johnson’s Story.’

Related Articles: The 15 Best Westerns Of The 21st Century

The Legend of Molly Johnson Trailer


Where to watch The Drover's Wife: The Legend of Molly Johnson