Woman in the Dunes [1964] – A Haunting Existential Masterpiece

Within a setting of literal entrapment and kidnapping, director Teshigahara and writer Abe unearth the invincibility of the figurative perpetual entrapment we refer to as ‘existence’ and subsequently reflects on our determination to create a meaning and hope of our own.

Sand, which didn’t even have a form of it’s own. Yet, not a single thing could stand against this shapeless, destructive power. The very fact that it had no form was doubtless the highest manifestation of its strength, was it not?

Hiroshi Teshigahara’s adaptation of Kobo Abe’s highly acclaimed novel Woman in the Dunes (‘Suna no Onna’, 1964) opens with a shot of huge uncanny crystal things which seems to be in motionless state. The camera slowly goes further back until revealing that the enormous crystals we saw are just tiny sand grains, perpetually moving to the beat of the winds, although the illusory calmness of sand dunes never betrays the turbulence faced within. These opening images sets up the canvas for Abe-Teshigahara’s intimate study of human condition: on the surface it’s about a stagnant, entrapped state of a man, but a closer microscopic look reveals myriad of human complexities fueled by an restlessly agitative inner state. Rarely do we come across a stupendous film adaptation which through its distinct visualizations does justice to the novelists’ profound vision and themes. In this vein, there can’t be a more impeccable synergy between literary and visual expression, as the one between Kobo Abe and Hiroshi Teshighara – both patrons of avant-garde art. Hence the opening scene in Woman in the Dunes is one of the many memorable instances, amidst Abe-Teshigahara collaborative efforts, where the novelist’s prose gracefully coalesces with the director’s cinematic attempts. 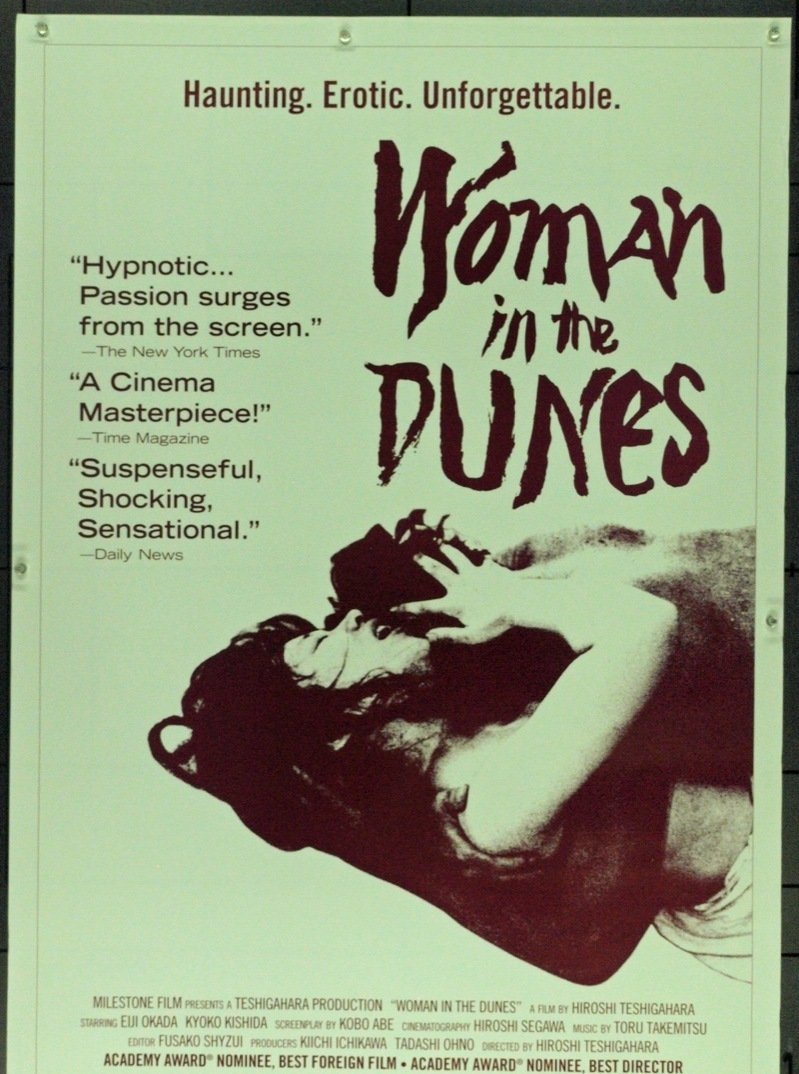 Both Abe and Teshigahara came to put on their unique signature on the respective arts, only by chance. Abe studied medicine and showcased penchant for collecting insects. Yet his love for Dostoevsky, Kafka, Poe, Heidegger, and Nietzsche pushed him to embrace the art of writing. He gained first recognition in Japanese literary circle by winning the illustrious Akutagawa Prize for his novel ‘The Cirme of S. Karuma’ in 1951 [at the age of 27]. Abe published his most famous work ‘Woman in the Dunes’ in the year 1960, which became the first of Abe’s novels to be translated to English [by E.Dale Saunders in 1964]. Hiroshi Teshigahara, a graduate of Tokyo Nation University of Fine Arts, was primarily a painter and sculptor and also directed stage plays. The versatile artist got acquainted with cinematic art by first making short documentaries (from the year 1953). Immediately after the publication of Woman in the Dunes, Teshigahara wanted to adapt it. But the director’s first feature film and first collaborative effort with Abe happened to be Pitfall (Otoshiana, 1962), based on the original script written by Abe. Identified as a documentary/fantasy, Pitfall tells a distressing tale of human corruption whose visual mood succeeds Antonoini’s L’Avventura (1960) and precedes Shohei Immamura’s lesser-known A Man Vanishes (1967) – the trio of films dealing with missing person and consequently concerned with the existential riddles of modern existence.

The novelist-director duo gained their international breakthrough two years later with Woman in the Dunes. The film won a Special Jury Award at Cannes and nominated for Best Foreign Film and Best Director Oscars (Teshigahara became the first Japanese director with an Oscar nomination). The success of Woman in the Dunes was followed by two other Teshigahara-Abe collaborations (adaptation of novels ‘The Face of Another’ and ‘The Man without a Map’). Although Abe’s novels after Woman in the Dunes were equally thought-provoking, his prose and themes became too abstract and obscure to make up for perfect film narratives. Therefore, the Woman in the Dunes (1964) stands not only as the best collaborative effort of the two avant-garde artists, but also as one of the most vividly realized novel-to-screen adaptations.

Actor Eiji Okada of ‘Hiroshima Mon Amour’ fame plays the central character Niki Jumpei, a schoolteacher and amateur entomologist in his mid or late 30s. He has taken a 3-day vacation and has traveled from Tokyo to an eerie coastal village, riddled with vast sand dunes. Jumpei is after a particular unclassified species of beetle with a hope that the beetle’s capture would ingrain his name in a book. Early in the movie, after wandering through whole day in the dunes, Jumpei absentmindedly lays down and monologuizes on the different set of ‘certifications’ – IDs – necessary to establish a person’s existence in the world. The internal monologue also hints at his crippled relationship with a woman. Although Jumpei, contrary to his complaints, is there to put out his name in an insect guide, also finds some solace in the eerily calm desertscape. However, his thought process is soon intruded by an old villager who appears to be friendly. Consumed by his thoughts, Jumpei has missed the last bus to Tokyo. The helpful local man ensures the city guy to provide a shelter at the village. Before long, Jumpei climbs down a rope ladder to lodge overnight in a desolate shack, situated inside a large sand pit. The lonely inhabitant of the hut is a young widow (Kyoko Kishida) whose mysterious expressions and obscure words slightly annoys Jumpei. 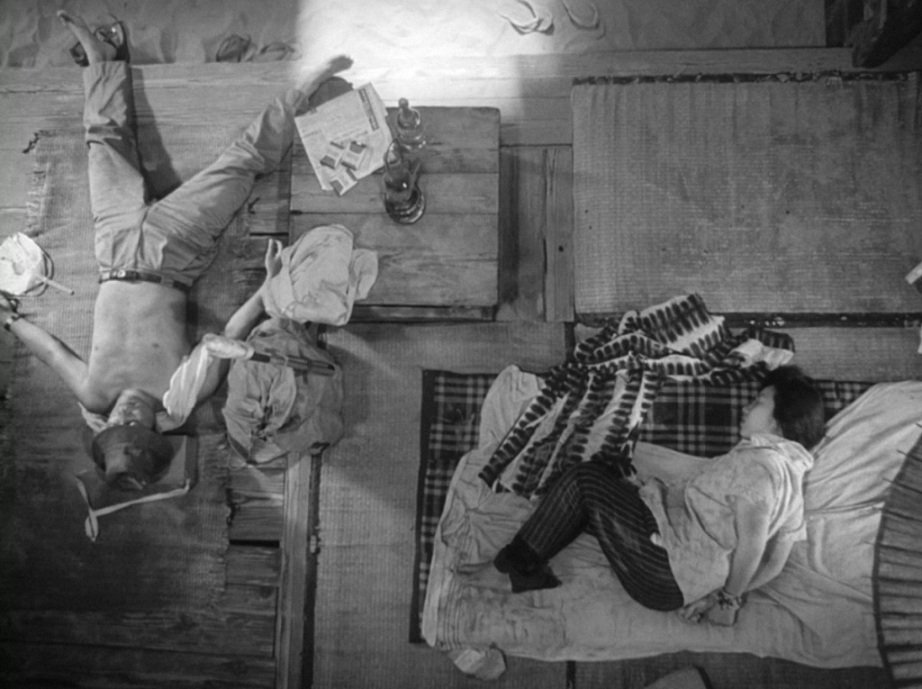 Few minutes inside the hut, Jumpei learns about the woman’s hardscrabble existence. She spends every night in order to shovel the sand that endlessly pours into the pit, which if unattended will bury her house and may be, in the long run, the entire village. She has lost her husband and child to the sand (buried alive). While eating, an umbrella is hanged above to prevent the sand grains pouring into the food. Jumpei wonders about the futility of such a shackled existence, but since this isn’t his problem he says less and goes to sleep. The next morning he wakes up to find the woman lying naked, her face covered by a cloth. Even though this suddenly unsettles the amateur entomologist, he considers this is the possible way to sleep in the sand-poring abode. But the real commotion comes a little later when Jumpei couldn’t find the rope ladder that was dangling last night from above. He raises hell, yet the woman covers her face, out of shame and fear. As the howling wind masks his inner screams, the man comprehends the villagers’ allegedly absurd idea to imprison him to shovel for them.

‘Are you shoveling to survive? or surviving to shovel?’ he questions the woman which on hindsight reflects the deep question posed by the great philosopher Albert Camus about our relentless quest to find purpose (or meaning) for existence in the quite meaningless universe. In time Jumpei develops an uncanny bond with the widow, who herself is a victim. Jumpei could simply rebel (reject the meaningless chore) and allow the entire village to surrender itself to the omnipresent sand. But his will to rebel and escape is tested in a manner that gradually propels him to find a stronger purpose within the limited, harsh surroundings. Is he really trapped or is he uncannily content like the man punished to roll a boulder to the top of a mountain? Within a simple setting of literal entrapment and kidnapping, Teshigahara and Abe unearth the invincibility of the perpetual, figurative entrapment we refer to as ‘existence’ and subsequently reflects on our determination to create a meaning and hope of our own [Kante Shindo’s 1960 movie The Naked Island is another unique treatment of the same theme] regardless of the devastation.

Neither the novel nor the film simply stays as an ideological thesis. It is vividly humane and complex as it intriguingly establishes the characters’ psychology and actions. Abe provides ample space for black humor which mostly arises from the protagonist’s ignorant and presumptuous behavior. Abe often censures how the urbanite’s proclamation of sociological and cultural advances creates an inescapable notion of superiority and power. On a more unsettling, illusory note, Jumpei hopes his harsh experience will prove to be a good thing once after his eventual escape. It is only when the man is outwitted by the villagers and confronts the cruelty of death, his aura of superiority bursts to make him cry for help. This particular incident in the later-half changes the guy to increasingly embrace his primal side for attaining basic needs. Strangely the initial will to escape slowly paves way to the man finding a semblance of control within his succumbed state. Interestingly, control of one’s life through reinvention of purposes becomes the ultimate reason of contented existence. Abe comments on how modern existence is defined by series of simulations and illusion of control. In that manner, there’s a timeless connection between Jumpei and individuals of the social-media era and the future descendants, since we often tend to see every conversation, incident and people as mere stimulants that provides previously unearned wisdom, without ever trying to deeply understand anything. So before the teacher/amateur entomologist begins to descend down the rope ladder, his existential downfall is initiated by this relatable, if not self-centered, behavior. 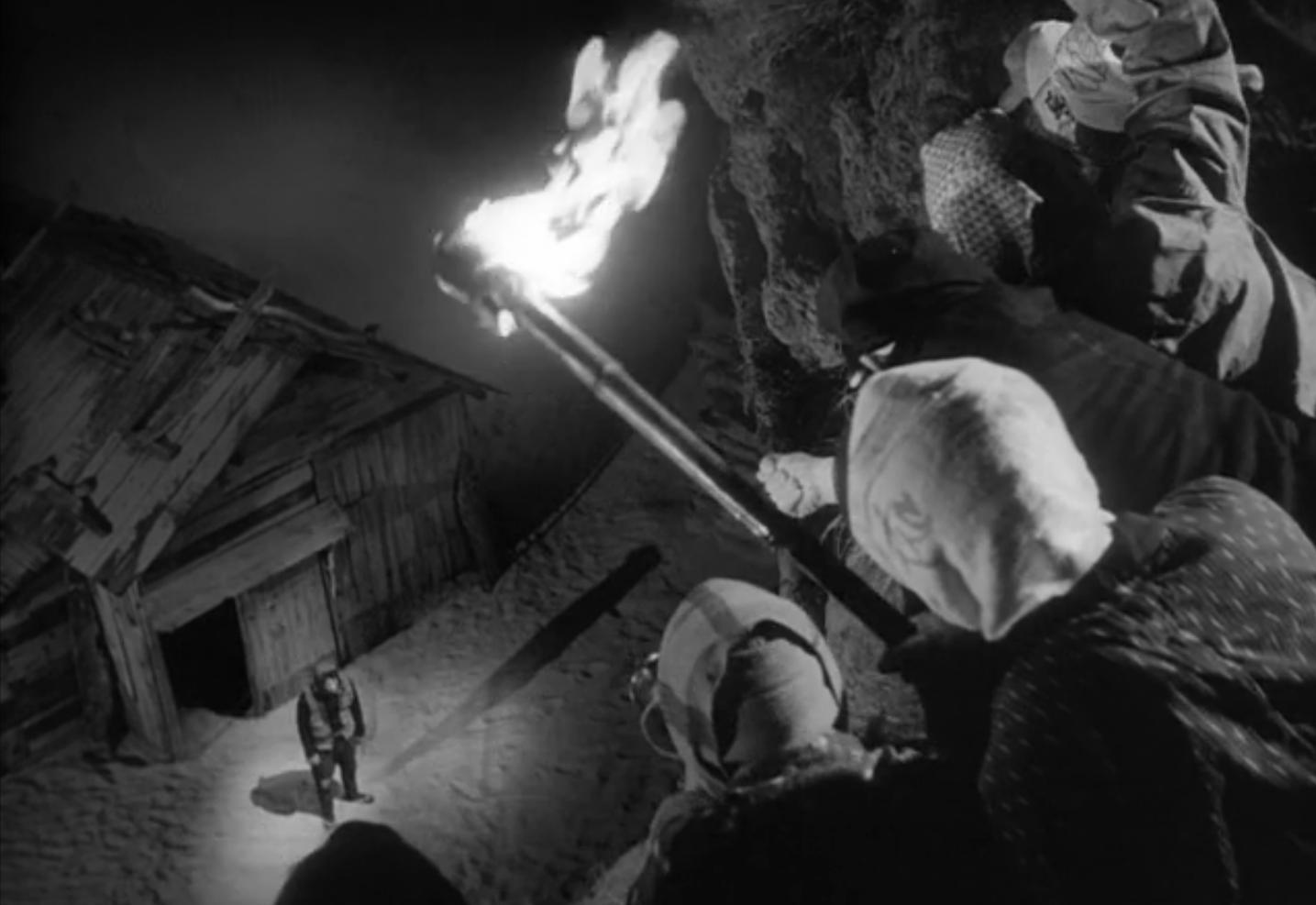 How director Hiroshi Teshigahara uses his visual craft to explicate Abe’s vision happens to be equally thoughtful and fascinating. Tesigahara’s indelible directorial presence is felt in the extreme close-up shots (almost microscopic in its detail) examining the women’s body (especially her pale neck flecked with dark grains of sand) which parallels his earlier close-up scrutiny of the sand and pinned-up insects, may be trying to comprehend what underlies these surfaces to make each a singular form of existence. The other thickly-textured close-ups passionately study the opportunistic sensuality. The coital writhing in the sand and washing of skin evokes both eroticism and a sense of absurdity. Director Teshigahara and cinematographer Hiroshi Segawa’s high-contrast, expressionistic black-and-white images create a claustrophobic landscape, filled with existential dread and erotic tension.  Every time as the sand moves to the pounding beats of wind, accompanied by skitters of insects, an oppressive relentless feeling grips us. Musical composer Toru Takemitsu’s eerie, experimental soundtrack is another important element of Abe-Teshigahara collaborations (Mr. Takemitsu has worked with Japanese masters like Akira Kurosawa, Nagisa Oshima, Masahiro Shinoda, etc). Eiji Okada and Kyoko Kishida’s brilliantly compatible performance makes the fantastical scenario seemingly plausible. Although Kishida is said to have had great creative differences with Teshigahara, her presence is as enigmatic and bewitching as the shifting sands. What’s more interesting is that we end up being more sympathetic to her than the freedom-seeking protagonist.

Woman in the Dunes (124 minutes) blends the elements of fable and suspense to present a naked and perturbing portrait of existential malaise.  Novelist Abe’s sumptuous prose and film-maker Teshigahara’s singular form and tone gracefully draws myriad of allegorical interpretations without sacrificing emotional depths.

Conor McGregor: Notorious [2017] - An Early Christmas Present For Fans Of The Mystic Mac

Woman in the Dunes [1964] – A Haunting Existential Masterpiece