Hoosier is the nickname for someone who is born in Indiana or a resident of this particular U.S. state. David Anspaugh’s beloved basketball drama, Hoosiers (1986) is set in 1950s small-town Hickory, Indiana, whose undervalued high school basketball team won the Indiana State High School Championship. It’s a feel-good sports drama that definitely adheres to certain formulas of the genre, and yet it’s a rewarding movie experience thanks to three H’s in the cast: Hackman, Hershey, and Hopper.  Of course, the smooth direction of Anspaugh, perfectly measured compositions of Fred Murphy, the vivid script of Angelo Pizzo (also the producer), and Jerry Goldsmith’s rousing musical score blends together effortlessly, and transcends Hoosiers from being ‘just-another-sports-flick’.

The biggest triumph of Hoosiers is the way it transports the viewers to a time and place. It’s a David vs Goliath story, but it wasn’t just about basketball. It focuses on a small community, capturing its passion, pettiness, and pride pertaining to the high school basketball sport. Hence, although Anspaugh and Pizzo employ filters of nostalgia, Hoosiers is eventually about an interesting set of townsfolk. Small-town Hickory is set forth as one of the central characters of the narrative, taking us on a trip through its empty yet beautiful landscapes, quaint street, barbershop, town hall, taverns, etc. Middle-aged coach Norman Dale (Gene Hackman), a former marine, reaches the Hickory High School and assumes duties as the basketball coach. He is hired by an old friend, Cletus (Sheb Wooley), also the exasperated principal of the high school. 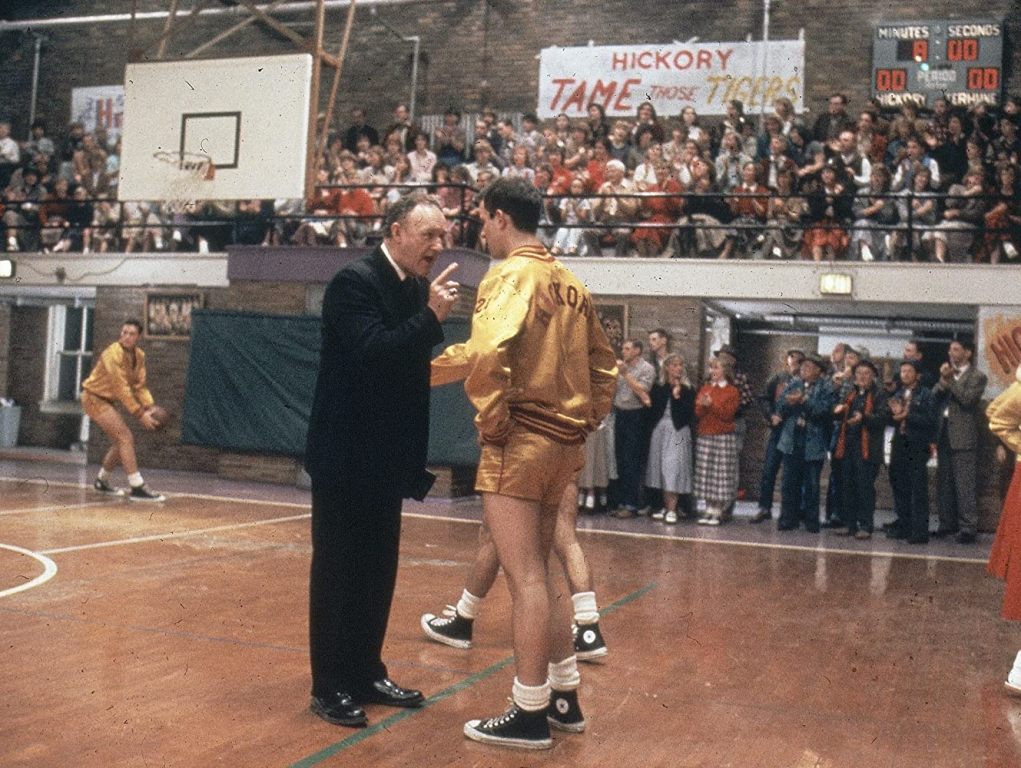 Norman Dale has once coached college basketball, before working a dozen years in the Navy. As a perceptive teacher, Myra Fleener (Barbara Hershey) observes, “A man your age comes to a place like this, he’s either… He’s running away from something or he has nowhere else to go.” Dale is of course a man with a chequered past and he is seeking a second chance coaching a high school team. But he is initially scoffed at and opposed by a lot of townsfolk. The former, deceased coach is a beloved figure in Hickory, whose demise had profoundly affected the town’s star basketball player – Jimmy (Maris Valainis) – that he has vowed to not play basketball. Myra, Jimmy’s well-wisher, supports his decision and hopes the boy gets a college scholarship and moves out of the town.

Hickory is a typical small-town America, ever suspicious of outsiders, and where everyone from barber to sheriff likes to freely offer coaching tips. The townspeople clearly don’t want Dale to coach, his approach to the sport offends their limited worldview. Hoosiers is a film of comebacks and second chances. Shooter (Denis Hooper), whose great knowledge of basketball gets lost in his antics as the town-drunk. He embarrasses his son, who is a member of the Hickory basketball team. Dale sees the value of offering a second chance to Shooter and utilizes the man’s innate love for the game (recruits him as an assistant coach). Nevertheless, it’s not easy for Shooter to shed off his old habits and keep himself clean.

When the locals fight Dale at every turn and even decide to throw him out, Jimmy decides to come out of his shell, provided the coach stays.  The tense relationship between Dale and Myra gradually cools off, then comes the unprecedented rise of the Hickory basketball team. Hoosiers ticks off these narrative milestones, but it does so with gentleness and magnificence that’s absent in a lot of Hollywood dramas. It’s a completely predictable drama, though the way Anspaugh and Pizzo meticulously build the emotional crescendo has set the benchmark for American sports drama flicks.

Hoosiers was David Anspaugh’s feature-film directorial debut who later went on to make another riveting inspirational sports-drama, Rudy (1993). Anspaugh, however, had a hard time working with Gene Hackman, whose working mode of keeping the set in high anxiety nearly pushed the director towards a nervous breakdown. Hackman, for his part, believed the movie will tank in the box-office, and joked with Denis Hopper that it will be a ‘career-ending experience’. Hackman eventually changed his view of the movie after re-recording some of his audio and has later praised Anspaugh and screenwriter Pizzo. 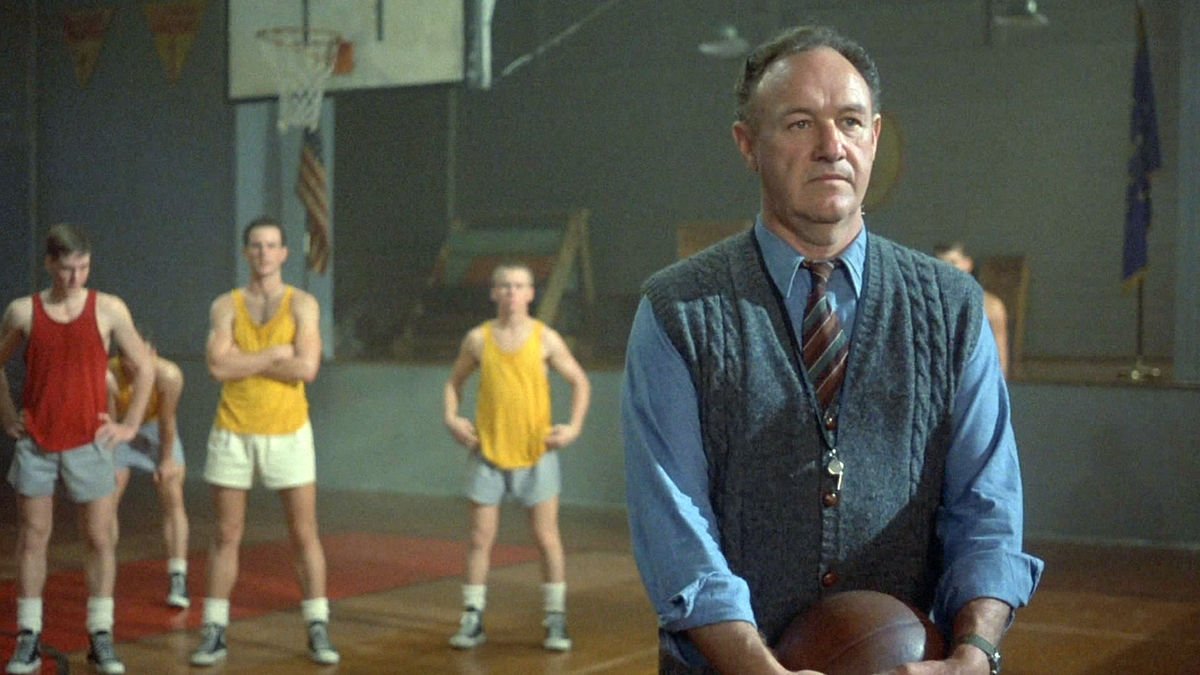 Despite going through a pretty rough experience, the director too has acknowledged the flawless and subtle performance of Hackman. Barbara Hershey and Hopper have also delivered knockout performances that organically connect the narrative’s emotional layers without ever trivializing it. Hopper received an Oscar nomination (for best-supporting actor; his only nomination), even though he felt he wasn’t nominated for the right role (David Lynch’s Blue Velvet also released the same year).

It was reported that the original cut was 168 minutes. The deleted scenes allegedly developed more of the romance between Myra and Dale (among other ‘character strengthening’ exchanges). At 114 minutes, Hoosiers seems to have been perfectly edited with no pacing issues and also duly evoking the nostalgia for a time and a place. In fact, the romance between Dale and Myra (in the final running time) only feels forced and qualifies as one of the very few pitfalls in the narrative. Writer Pizzo’s portrayal of small-town culture though starts off in a stereotypical way, a rich texture is quietly slipped in and the townspeople characters imbue the sense of lived-in feeling (particularly the charming basketball players – Jimmy and Ollie).

How can a sports movie exist without a lively montage? And what choices does an underdog narrative have, except to take the path of upbeat denouement? Anspaugh, nevertheless, stages the must-haves of the narrative with an emotional acuity and attention to detail that keeps us engrossed. There’s a naturalness to the direction and performance which brilliantly adds to the overall drama. ‘Coach Carter’ and Ben Affleck starrer ‘The Way Back’ are the only other basketball dramas that come to my mind that possessed such compelling naturalness.  In his four-star review of Hoosiers, critic Roger Ebert describes it as ‘a movie that is all heart’ – a concise description of a familiar yet irresistible underdog story.