The idea of a hunt is to track and kill an animal for food or leisure. It happens to be one of the most primitive life hacks that have sustained human beings through centuries. Traditionally, hunting is directly proportional to the display of masculine prowess. It, after all, requires you to display your capabilities to be patient, think on the go, bring upon violence, and provide for women and children, who are believed to be inferior to men. Hunting unites the physical and mental resilience of a human being under one roof. Directed by Robert Machoian (who is very famous for his film, The Killing of Two Lovers), this 1 hour 36 minutes-long movie, The Integrity of Joseph Chambers, is the story of a man out to hunt for his family. It makes for a riveting but slow, predictable watch because it beautifully deconstructs masculinity in the face of the age-old tiff between man and nature.

Joseph wakes up before dawn. He shaves his moustache to give himself a unique masculine look. He packs his bag. He kisses his wife and sons goodbye. He leaves home to hunt. He has, we come to know, never hunted before. The moment he steps foot inside the forest, it starts becoming evident that he is a misfit in the environment around him. Soon, he has hunted an unconventional prey. At the end of the film, will he be able to place this meat on the family dinner table? Machoian strips down the story to its bare bones like a slice of well-cooked meat. However, it tastes so bland that you’ll forget midway through this film that you were here on a different trail. The film transitions from being dedicated to the act of hunting to the story of a man tormented mentally by the same act. 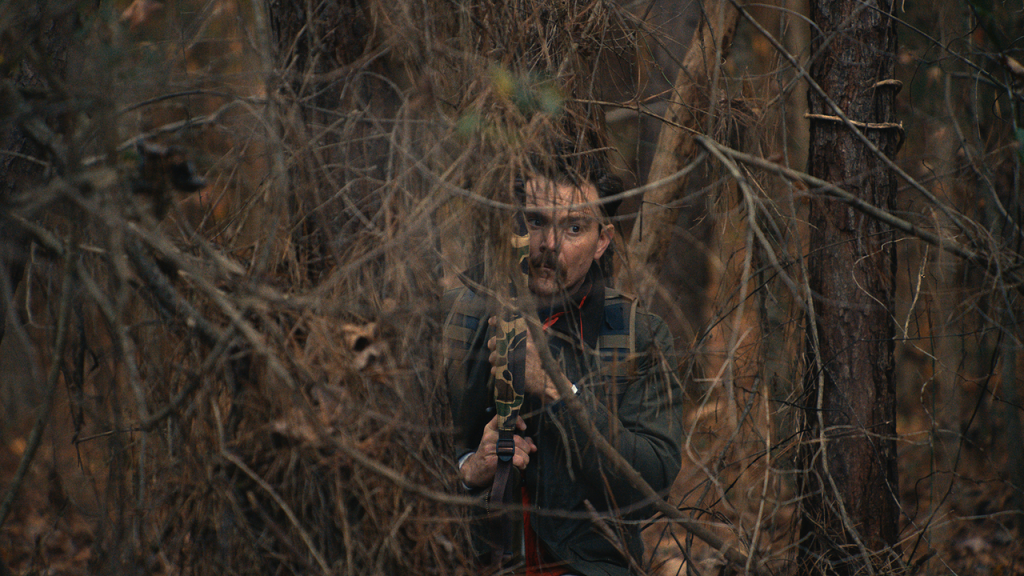 While Clayne Crawford plays the protagonist in this film and is literally present in every scene, it is the background score that stole the spotlight for me. Rich natural sounds of birds, insects, and human beings in association with a desolate forest area produce an orchestra that is highly captivating. It dips and soars and reacts to Joseph’s actions in a unique way, almost as if it were a character in the film itself. In fact, in a few scenes, the horror of hunting is captured only through its musical element.

The cinematography by Oscar Ignacio Jiménez attempts to make up for the lack of narrative integrity in this film. Curiously, the frames that capture Joseph in the wilderness become tighter by the minute. The day transitions from dawn to dusk in the course of the film, with natural light filtering the frames and keeping us informed about the hour of the day. In one scene when Joseph can spot a deer at a distance, its colour camouflages with the vegetation on this land. Since then, whenever Joseph is looking around to spot a deer, I was forced to become alert. It is certainly one of the better ways to keep our attention glued to the screen as the plot starts to ebb in quality in the second half.

Joseph, played by Crawford, is the plot of a major chunk of the film. He is loving and ready to set out on a hunt for the sake of his family, the role of a male provider in the hetero-patriarchal world. I was only starting to think that the film is interested in exploring the complex relationship between a hunter and its prey and man against nature, when it takes a turn and starts to pick on Joseph’s psychological state. However, the most interesting aspect about him is that he holds up the image of a man we don’t expect to go hunting. For example, he takes so much time and self-convincing to go close to the prey he has shot. He is ill-prepared to use his hunting kit but takes pride in carrying it around with him, lost in daydreaming. He is neither patient in his hunting efforts nor strong. In fact, when he realises that he finally has a prey, no matter how unconventional, he breaks down in tears. This entire sequence was comical to me but in a sinister way.

I cannot thank the film enough for showing that hunters are not any special brunch of inimitable men. It separates the perceived markers of masculinity from Joe’s character and presents us with a flawed human being who wishes not to run and hide in the face of a wrong committed. Crawford’s expressive acting, coupled with the background score, makes this film all about him, the one-man-army. Every other character comes and goes like the deer in the film, speaking their parts which ultimately don’t bind well into the narrative.

The ‘integrity’ of any human being refers to the strong moral character of a person. With the allotted title of the film, there is little scope for imagination or curiosity. It tends to give away the plot. If the film did not have a paper-thin narrative and pursued the threads of cannibalism, man v/s nature, or sarcastic treatment of the title, it would have perhaps been a far better watch.

The Integrity of Joseph Chambers premiered at the Tribeca Film Festival, 2022.