Brimming with a quirky spooky sensibility, outstanding zombie characters, and the ever so slightly removed-from-reality genre, ‘The Loneliest Boy in the World’ is a zombie horror comedy that has hit the theaters at the perfect time of Halloween. A weird combination of grotesque zombie elements and a charming fairytale setting, the film is a heart-warming tale rooting for friendship, family values, and the American dream of domesticity.

The Loneliest Boy in the World Plot Summary & Movie Synopsis:

The Loneliest Boy in the World is the story of Oliver who lives alone in his house and has a deadline to ‘make to a friend’ lest he be sent back to the psychiatric home. The fear of the institution pushes him to literally ‘dig’ out a friend (from the grave). Once he gets comfortable with the new friend, he craves more. And so, he decides to get a whole family for himself. After he finds a father, mother, and little sister (from the graveyard), in addition to his friend ‘Mitch’ who he already has, he pleasantly wakes up one day to find that the zombie family has come to life and adapted to their domestic roles.

Tackling one life problem after another, the zombie family teaches Oliver the ways of the world in between eerie graveyard scenes and gory zombie activities, in the almost edible, cupcake-colored house. The film had a lot of excellent elements that worked in its favor- the impeccable cast adapted to the roles so well that you would feel love for Ollie even when he is digging graves, and you would hate Kurt for bullying our boy. The prosthetic make-up is so on-point- every chipping off of the skin, the falling off the ear, oozing blood, and pulling out of body parts would evoke nausea but also admiration.

Aside from this, the film opens with a very strong premise- the theme of family longingness portrayed through zombies. Ironic, right? But also very interesting. The setting of the characters and the premise give leeway for a lot of action, dark jokes, and interesting anecdotes. Unfortunately, not a lot happens after the initial conflict is established thus making the story borderline boring and a drag.

Another thing that didn’t work in the favor of the film is the merging of the two time periods- the setting of the 50s and the actual timeline of the 80s. The scenes shot in different settings- indoors and outdoors- give a disconnected feel to the film that stings the eye. More so, because time is not even an important theme in the narrative. As a result, the world of the film could not conjunct to give a wholesome thematic sensibility. There are also a lot of questions left to the disposal of the viewers like why was Julius doubting Oliver, why didn’t no one question the unusual activity at the graveyard, why did the family not go out of the burning house with Oliver, etc.? Let’s answer it one at a time.

Who is Oliver and What is Wrong with Him? 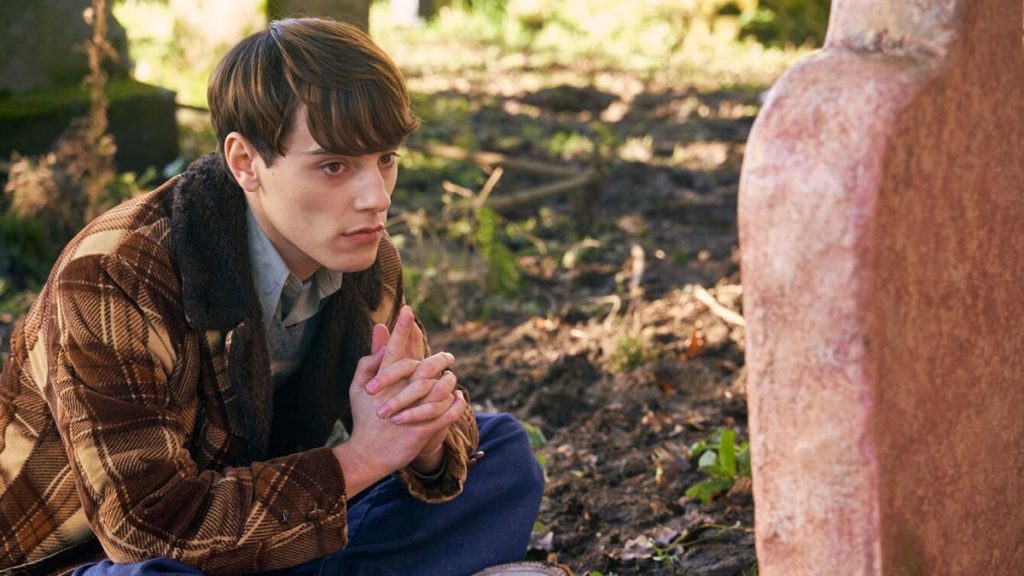 The film starts in a very Wes Andersonish sensibility of theme and symmetry where we find our protagonist ‘Oliver’ waking up to make breakfast for two (him and his mom), inside what looked like a bubblegum colored doll-house covered in pink from the top to toe. The catch is that there is no mother and he ends up eating alone, post which he proceeds to mark his calendar ‘Be Normal’. Not normal, right?

Oliver stays alone in the house in Hubris and has no social interaction since he has spent all his life as a recluse with his mother, watching TV and talking to each other only. The mother was probably depressed after the husband deserted the duo and hence, wanted to keep the child to herself. However, on a ‘pleasant morning’, she dies in a horrific accident and so the child has to be left to the mercy of the social workers.

After Oliver came of age, he was released from the institution for a stipulated time while his activities were being monitored by the social workers- Julius and Margot. It is on them to decide if he is fit to live alone in the world. For the same, he has been given a 7 days timeline before which he has to make a friend or he would end up in the psychiatry home.

Who are Julius and Margot?

Julius and Margot, aka. Mr. Carter and Ms. Seale are social workers who are appointed to check up on Oliver and monitor his activities. While Margot thinks she can see an improvement in Oliver and his social skills, Julius doubts that something is terribly wrong with the kid. They visit Oliver several times in the course of seven days to ensure that he is doing alright. However, when Julius figures that there is a legit problem- contrarily he gets sent to the asylum himself in a series of comical events. Also, Margot eventually lets go and is convinced that Oliver is completely normal and quite capable of living alone.

Why and How Does Oliver Get a Second Family?

Oliver has a deadline of seven days to make a friend lest he be sent back to psychiatry home. So, when he witnesses a young boy’s (Mitch) burial and overhears his mom saying that Mitch was ‘everyone’s friend’, he decides that Mitch is his friend too. Later, when Margot suggests that Oliver should ‘dig out’ Mitch (metaphorically), he actually digs out the dead body and brings it home to be his friend.

A couple of days later, Oliver craves more company and longingness for family. So he goes back to the graveyard and finds himself a father, mother, and younger sister, who had died in a recent plane crash. On the way back, he accidentally drives over a dog named ‘Ninja’ so he gets her too as a family pet. Once the family was curated, he clicked a family photo. Call it a miracle or just the fantasy genre of the film, the next morning Oliver wakes up to a fully-functional zombie family. Sure, some of them have non-functional or entirely missing body parts but it was Ollie’s one happy family.

The Loneliest Boy in the World Movie Ending, Explained:

The ending of ‘The Loneliest Boy in The World’ is mostly concerned with tying up any open threads in the narrative, which are very few to begin with. There is the case of Julius and Margot- the social workers concerned with Oliver’s well-being, the zombie family who came to help Oliver on how to live life, and the happy ending for Oliver. Let’s start with the first one. 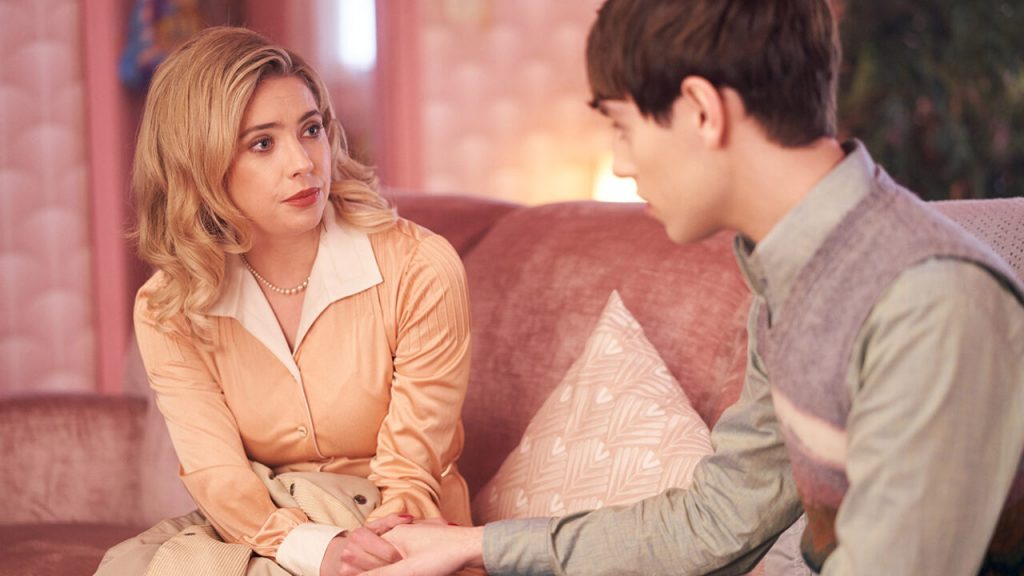 After sensing a series of fishy events at Oliver’s house (like finding a fallen ear), Julius decides to take matters into his own hands and find out the truth. So one night, he sneaks into the house in order to find a clue, while he has already phoned for an ambulance in advance as he believes that Oliver is gravely sick. Once inside, he is first met by Oliver himself in a Halloween costume that freaks him out and scares him. Just when he thinks the worst is over, he sees Mitch in a full-bodied bandage, the mother zombie with her cheek chipping off, the father zombie without an ear, and Mel (the sister) with a hole in the throat- he is obviously terrified to the core.

The final fright for Julius comes in the form of the zombie dog who came and tugged at his leg. Right after this he runs out of the house yelling at the top of his lungs. Fortunately or unfortunately, the ambulance has already arrived outside. To his relief, scratch that…to his shock, they believe him to be the sick person, capture him and give him a large dose of medicine in the ambulance. He is driven off.

On the other hand is Margot who did not really have any doubts, to begin with. So when she sees Oliver at the beach, later on, she informs him of Julius’ ‘sickness’ and that they won’t be visiting anymore. She also wholeheartedly believes that Oliver is just another ‘normal’ kid who is ready to look after himself. She leaves after wishing Oliver luck and assuring him that she is just a call away in case he needs her help.

The family is the second open noose that has to be tied down for the film to have an ending. So, when it has been established that the family has taught Oliver well- they dealt with the bully kids for him, helped him form a romantic relationship with Chloe, and taught him to socialize in general- it was time for them to leave. Which they did, in the fire sequence at the end, when the whole house burns down. Lastly, we also see Chloe come and get Oliver from the house confirming that he now has a person to be with and probably a family (Chloe’s family) that he could maybe call his own. The last scene has Oliver holding the fish bowl where the dead fish from one of the first scenes of the film is alive again and swimming. Is this a metaphor for the revival of new life and hope? Probably!

Read More: Where to Watch and Stream ‘The Loneliest Boy in the World’ Online?

Where to watch The Loneliest Boy in the World

Earwig (2022) Movie Ending, Explained - What does the painting mean?