The Menu (2022) Themes & Ending Explained: Veteran television director Mark Mylod’s new satirical dark comedy, “The Menu” follows a fairly simple story that begins with the arrival of a bunch of wealthy people on an island. But the makers also tweak the template just enough to make it a social commentary about the elitists and the working class. The center of attraction on the island is a $1,250 dinner plan, a tasting menu assembled by the renowned Chef Slowik (Ralph Fiennes).

The name of the cuisine is Hawthorne, one that’s special enough to be located on an island of the same name. Some of the customers are established food critics, while others belong to similar elitist circles. But Margot (Anya Taylor-Joy) seems ordinary, as she constantly wonders why her date, Tyler (Nicholas Hoult), keeps god-worshipping the head chef so much. “What are we eating? A Rolex?” she asks him.

Chef Slowik is established as a dour guru of sorts of cuisine on this island – one who has a reputation and heads an army of cooks who labor across the wide diners of the open kitchen. Like a sergeant’s commands, they obey his orders in a synchronized way responding with “Yes, Chef”. But this time, he seems to have reached his limit with presenting art only to an elite class of takers, many of whom don’t really care for the agonies and ecstasies of culinary creation or any kind of art form for that matter.

So he’s decided to punish them by laying out their sins in front of them in many shades of parmesan, and tortilla and then eventually ending them in a fiery explosion where they’re all dressed like a S’more. Yet on this adventurous evening, Slowik notices someone who shouldn’t have been there. That’s Margot, a date that’s literally been paid to accompany Tyler. Who really is Margot? Why doesn’t the chef want her there? Here’s a deeper look at the themes of the film as we break down what that ending meant. Spoilers follow.

What’s Cooking In The Menu? 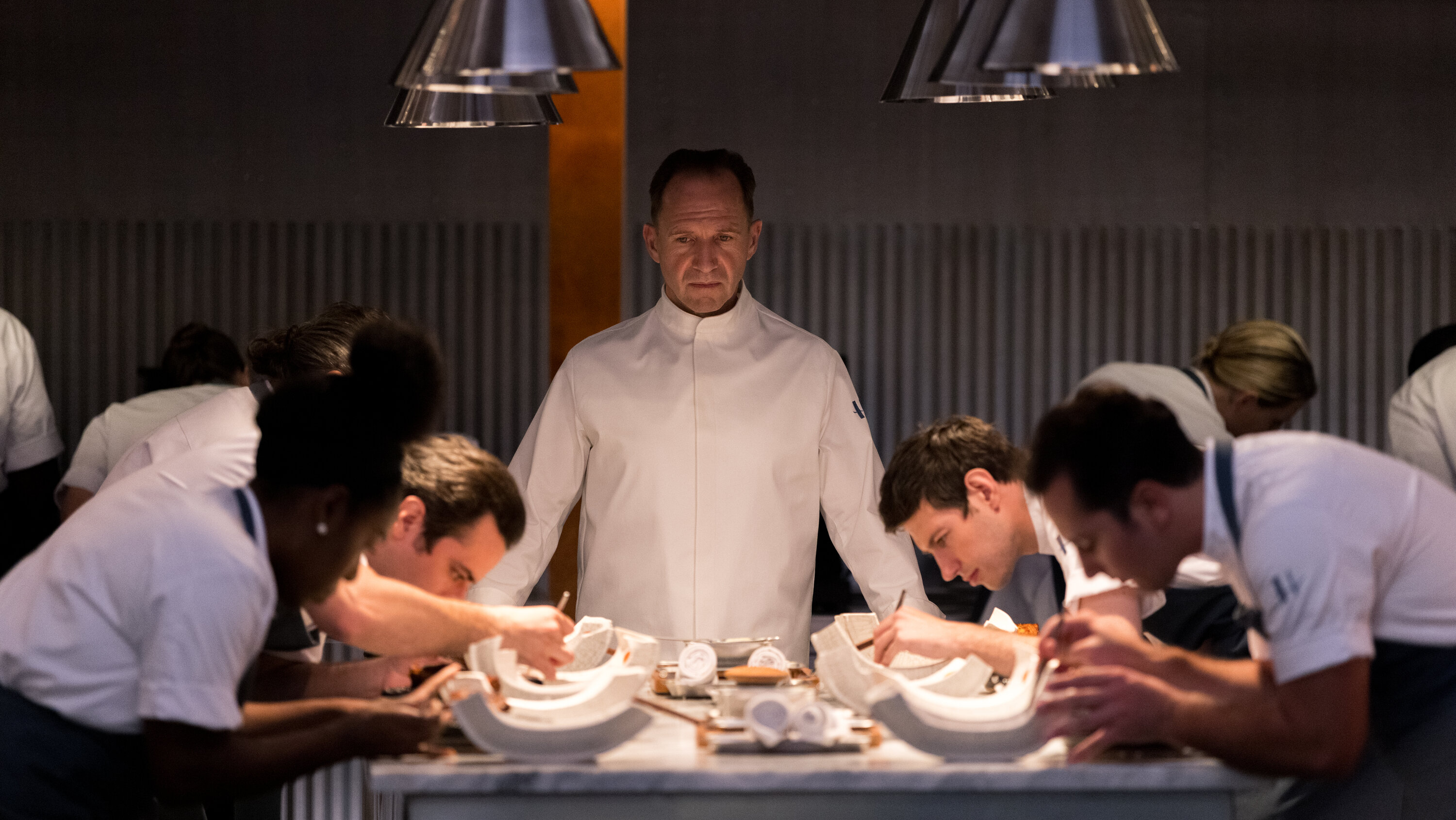 Little do the customers realize when they first sit to dine that the Chef and his cult-like line of cooks have meticulously planned each’s demise for purportedly good reasons. Their first victim is the corrupt billionaire who owns a chef’s island restaurant. He’s disposed of by drowning in the water, as the other customers watch him through the thick glass wall. Next in line is the food critic and gatekeeper for the elite, (Janet McTeer) who’s made her entire career by building and destroying the actually gifted, including Slowik himself. There’s also enough room for those mediocre artists who betrayed their craft in face of dollar signs (John Leguizamo). And that’s how it goes; in the mind of the chef and his minions, this is about cleansing the elite of their sins by deconstructing their whole lives and serving the same on a platter.

Who Are The Givers And The Takers?

As the film establishes pretty well with each kill, Slowik wanted nothing more than to make his guests feel embarrassed and affronted. At one point, he makes them think deeper into why none of them had even tried to escape or make a retaliative move. He knows that despite coming from different professional elitist backgrounds, all of them have used money as a front to do whatever they please. For once in his life, the tables have turned and Chef Slowik is the one in charge.

The celebrity chef wanted to bring the wealthy guests to their knees so that they realize what it feels like to be helpless and at the mercy of someone else. The guests’ wealth has very well pushed the food industry forward, but it has also made the dining experience costly by widening the gap between various socioeconomic classes. This has sucked the joy and pleasure out of the culinary and tasting experience.

Crucially, Chef Slowik has become a puppet, his passion trampled down upon by the elitists (who also fund his endeavors) and he’s grown resentful of them. At Hawthorne, however, their money could not save them, and their survival instincts have been long too buried in the pile of corrupt greed. And that is exactly why Chef Slowik puts all of them in this preordained situation, as he thought they were also the reason why food as art was ruined.

Through its dense themes, filmmaker Mark Mylod weaves in a commentary about consumer culture, food bloggers, and the superficiality of the wealthy overall who all believe they’re giving to the fine dining experience when in reality they’re very much leaching from it. The film at every point offers a lot to say about the origins of the food Chef Slowik’s guests enjoy and how it differs across class lines. For the elitists, eating has been overly commercialized and treated as an ‘experience’, while they pay little attention to the actual craft that goes behind which renders the process into being less creative and less enjoyable over time.

The matter-of-fact dialogue delivered by the cult-esque army of the chef strikingly contrasts the way the customers revert back to the actions on screen. Hence, the line of class divide also becomes clear with these juxtapositions, as we see how being rich can bolster experiences like expensive dining. With Tyler’s constant obsession with Chef Slowik’s use of ingredients, we begin to wonder if he really cares so much about the process of making food. But as well later see, he doesn’t much care about the food itself so much as he can impose superiority on everyone around who believes won’t appreciate Slowik’s work (like his own date, Margot). It’s this stark line between classes where “The Menu” sits and examines its rich themes while stripping the rich of their morals.

Margot, like everyone else in the film, isn’t who she says she is. But it isn’t until Chef Slowik takes notice of her that it’s revealed to us that there’s something amiss about her backstory. As the chef confers with her at one point in the movie, he recognizes in her someone else who works in the service industry, and indeed she turns out to be a member of the world’s oldest profession. With this implication of her being a sex worker, we’re told that Tyler had actually paid her to be there that night. That’s why, the chef then gets determined to have her pick between ‘us’ and ‘them,’ although the end result is still going to look as dire and ultimately meaningless. Slowik plans to consume her in the same flames that eventually equalize all of us in the same dust.

After this reveal, the chef asks Margot/Jane to go bring a barrel to prepare for the dessert which would be the last meal for the evening. But upon finding that barrel, Jane sneaks into Chef’s cottage, where she finds a photo she can actually see her younger self in: that of a young Fiennes superimposed to be ‘Employee of the Month’ at an old hamburger shack. Margot thus sees the bullshit in an artist and begins to see his twisted motivations behind the evening. Because if Slowik really wished to be free of the burden of appeasing the wealthy leeches of society, he could just leave his current restaurant and intentionally start one that is economically friendlier and aimed at the working class who would still appreciate him for who he is. But the chef instead chooses to murder his sycophants and admirers, while even taking his army of brainwashed cooks along with him. The truth is, however, that he just likes being worshipped and hearing how great he is by a crowd he knows would give him the social capital.

Why Does Slowik Let Margot/Jane Escape?

But Jane, as we learn to be Margot’s real name, also recognizes the arrogance of pretension that Slowik oozes out underneath every presentation of his next course. The entire meal is a monument to his own inflated sense of self-importance and pride. But Jane for once decides to break the tradition by challenging Chef Slowik. She calls him out on his own actions, by ordering that he serve her a simply made Cheeseburger. Turns out that this actually saves her life as her refusal to bask in the genius of the chef intrigues Slowik more than her innocence as a former speck of the working class. Her refusal to buy into the inflated hype that was begun decades ago by McTeer’s food critic makes Slowik see something deep, as he earns Jane’s respect.

The food he’s been selling is, indeed, intellectual junk- every bit as affected and as overtly masturbatory as Tyler’s ceaseless babble that demystifies how it’s cooked. Does Chef want to impress her? If so, why does he genuinely seem satisfied and at once content while he prepares her the cheeseburger? Upon making her the cheeseburger, Slowik reveals a sense of fondness or enjoyment on his face when he’s slapping some American cheese on two eight-ounce patties for Jane. She only takes a single bite, but it’s perhaps enough to remind him that he isn’t an artist who’s out there to satisfy his uncaring muses—he likes to be truly appreciated by those who can only afford astonishment and the simpler joys of enjoying a burger. It’s a scene extremely telling of Slowik’s character, as we for the first and last time see the underneath persona of an artist who once might’ve been this passionate about culinary.

In the closing minutes of “The Menu”, we see the visual depiction of Slowik’s apparent epitome of our own homogenized culture that seeks validation and pleasure in the excess. The chefs dress up the remaining customers in costumes made out of chocolate and other ingredients, as Chef Slowik burns them all to death. We see the melting chocolate run down everyone’s face, as a final title card surmises at the film’s end how the evening’s dessert included the staff, the restaurant, and the customers among its ingredients.

Jane, meanwhile, is all alone in the Pacific Ocean when her boat has suddenly run out of gas as she hears the big explosion. Her only company on the boat? The remnants of the Chef’s last creation… a good old cheeseburger. The closing shot of the movie is thus her biting into the cheeseburger and hearing a faint clap in the distance.

Is Slowik finally dead? Or does it potentially mean that there was something wrong with the burger? After all, the chef’s right hand earlier had suggested how if their meat were to age just one day longer than usual, it would prove lethal to the consumer. Well, that’s for you to decide. Given the past works of “The Onion” and John Oliver veterans Seth Reiss and Will Tracy, it was expected that “The Menu” wouldn’t leave us with any easy answers. But well, given their empathy for the working class in general, it’s safe to assume that Jane made it out alive. Right?

The Menu (2022) Review: a Gourmet Satire That’s Baked Until Golden

Leopard Skin (Season 1): Recap & Ending Explained - What happens to the characters in the end?

The Impact of Casino Films on Gambling Culture