George Miller’s Three Thousand Years of Longing, his first film since the six-time Oscar-winning touchstone Mad Max: Fury Road (2015) takes the viewer in a polar opposite direction, delivering a quiet, dialogue-heavy, and surprisingly poignant experience. Fans of Miller’s celebrated action franchise shouldn’t feel let down, for this is precisely the kind of tonal variation one can expect from a man who went from three Mad Max films to Babe (1995) and Happy Feet (2006) before finding his way back to Mad Max again. Miller isn’t one to play by the rules, so it makes sense that his latest effort should be exactly what it wants to be. Then again, that reasoning may also offer some explanation as to why Three Thousand Years of Longing is more of a work about ideas than it is about characters, a muddled and often aimless journey into the nature of storytelling that mistakenly believes it has a greater purpose than it ultimately does.

To Miller’s credit, Three Thousand Years of Longing has the right ingredients to make a high-concept idea work, especially with two likable actors leading the charge. Tilda Swinton stars as Alithea Binnie, a narratologist and professor of literature who releases a djinn from a glass bottle she buys in a gift shop while on a business trip in Istanbul. The djinn, played with all the reliability that an actor like Idris Elba can bring, does his due diligence by offering her three wishes in exchange for his freedom. Alithea, content with her solitary existence and without much desire to speak of, is not so easily taken in by her ethereal visitor, wise enough to point out that there’s no story about wishing that ends well for the protagonist. And off the viewer goes on a visually dazzling journey across time as the djinn recounts three separate instances that both confirm and counter Alithea’s claims.

The resulting stories blossom from the djinn’s memories with a discernible sense of wonder and awe that makes the film worthy of its admission price. Miller recalls shades of Tarsem Singh’s The Fall (2006) both in the loose, potentially illusory nature of the stories he tells and the methodical splendor he employs to give them life. Whether it’s a retelling of the Queen of Sheba’s visit to King Solomon, the mad-with-power escapades of two royal brothers, or a lament for a young woman forbidden from exercising her unbridled genius, the film is rich with Middle Eastern iconography and demonstrates a clear adoration for the landscapes it brings to the forefront. If Three Thousand Years of Longing were to let cinematographer John Seale — another Fury Road alum — knowingly drift between these locales with no other objective than to point out that they exist, it might have been a better film. Even if it were just these vignettes on their own without the additional modern-day framing, it might have been a better film.

Unfortunately, Miller asks too much of his audience, expecting them to find greater meaning out of a set of tales only told from the djinn’s perspective. No one can possibly understand how scarred the djinn is by his eternal existence because the film doesn’t offer any insight into those who make their wishes. Granted, each story holds attention in its own way, but the djinn’s present-day reflections make their conclusions all the more inevitable. It’s a complication to an unorthodox film that, even at only 108 minutes, already feels about 20 minutes too long. What Three Thousand Years of Longing ultimately makes out of Alithea’s interactions with the djinn is forced and unsatisfying, setting the stage for what plays out like an unearned epilogue that distances the film even further from its unclear goals. For a film striving to be about as much as it can be about when commenting on something as grandiose as storytelling, it doesn’t seem to understand that a paying viewer needs clear-cut characters and themes to latch onto.

The benefit of George Miller’s filmmaking style is that he isn’t limited to one, and thus invites a plethora of individuals to enjoy his work. With its blend of philosophy and metatextuality, Three Thousand Years of Longing certainly has the potential to invite as much discussion as a pig learning to herd sheep or a two-hour car chase through the desert. If another director had helmed the film, its fate would hang a little bit more in the balance than it currently is, but there’s little that can be said to deny Miller’s ambition. He’s as carefully selective of the stories he tells as the most revered auteurs working today, but even if he realizes his vision, that doesn’t mean it’s a vision that anyone can get behind. Luckily, if anyone is alienated by Three Thousand Years of Longing, they’ll be flocking back to the theater in droves as soon as Furiosa hits the screen in 2024. How Does Alithea Discover the Djinn?

Narratologist Alithea Binnie (Swinton) opens the film by narrating a story about herself, which she admits will be fantastical in nature. She arrives in Istanbul for a mythology convention, where she will be serving as a keynote speaker. While awaiting her ride, she is approached by a small man who places his hand on her luggage handle; he emits a glowing energy from his hand. Alithea continues to have strange encounters throughout the day. She later delivers a presentation about mythology’s relationship to reality, during which she notices a large metallic man sitting in the audience. As she attempts to move away, the metallic man approaches her, causing her to pass out. Upon coming to, she gives a thumbs up to the audience.

As a form of thanks for her appearance at the convention, Alithea’s colleague, Gunhan (Erdil Yasaroglu) takes her to an antique shop and offers to buy her a trinket. She becomes entranced by a glass bottle, which the shop owner notes is several centuries old. Gunhan offers to buy Alithea something nicer and newer, but she is insistent about the bottle. Taking it back to her hotel room, Alithea begins to clean the bottle due to fire damage. As she begins brushing it, the bottle bursts open and releases a djinn (Elba) which grows to a tremendous side. Shrinking down to a standard size upon Alithea’s request, the djinn proves his legitimacy by absorbing knowledge from the room’s television and even going so far as to reach his hand inside the screen. He also informs Alithea of his obligation to grant her three wishes in exchange for his freedom, which she is skeptical of due to her knowledge of stories involving wishes.

How Was the Djinn Imprisoned?

Alithea tells the djinn a bit about herself, including her childhood romance with an imaginary friend she named Enzo. Alithea informs the djinn that she later married a man named Jack (Peter Bertoni) and became pregnant with their son, whom they were to name Enzo, though she would eventually miscarry, leading to the disintegration of the marriage. The Djinn then tells Alithea about his own experience with love and how it led to his imprisonment. Millennia earlier, the Djinn fell in love with the Queen of Sheba (Aamito Lagum), though his attempts to woo her were thwarted by the arrival of King Solomon (Nicholas Mouawad), who won her over by playing the harp for her. When Solomon and Sheba consummated their relationship, the King imprisoned the djinn in a bottle upon sensing his presence nearby. Throwing the bottle into the ocean, the djinn would be left there for over two thousand years.

The djinn continues recounting the experiences that led him into Alithea’s possession. His bottle would eventually be found by a slave girl named Gulten (Ece Yuksel), who pined for Prince Mustafa (Matteo Bocelli). Gulten successfully wished to woo Mustafa and carry his child. The relationship did not go unnoticed by Sultan Suleiman (Lachy Hulme). Suleiman’s concubine, Hurrem (Megan Gale), convinced him that his son wass vying for throne and was considering overthrowing his rule. As a result, Suleiman sent an assassin after Mustafa and Gulten. When Mustafa was killed, the djinn implored Gulten to use her third wish and save herself, but she was ultimately murdered before she was able to do so, thus leaving the djinn imprisoned in his bottle.

‘Two Brothers and a Giantess’

Several years after the matter, the djinn’s bottle was discovered once more by a pair of royal brothers, Murad (Ogulcan Amran Uslu) and Ibrahim (Jack Braddy). As Gulten had hidden the bottle beneath a large stone, the brothers were unable to fully retrieve the bottle. Leaving it behind, Murad joins his kingdom’s militia and goes to war before taking his place as Sultan, while Ibrahim is locked in a room with concubines of his choosing; he discovered he had a strong preference toward heavyset women. Murad proved to be a violent and remorseless ruler, often killing his people just for sport before being assassinated himself. Ibrahim is forced to take over as Sultan against his will, though he was able to keep his harem under the eye of his lead concubine, Sugar Lump (Anna Adams). While Sugar Lump was walking through the kingdom’s underground caverns, she slipped and fell to the ground, smashing the stone that protected the djinn’s bottle. With the djinn released, he attempted to offer her three wishes, but she rejected the offer and wished for him to be sent back into his bottle, leaving him stuck in his bottle at the bottom of the ocean.

Alithea becomes increasingly annoyed by the djinn’s persistence in offering her wishes, causing the two to get into an argument. Alithea tells the djinn she is beginning to wish they had never met, greatly upsetting the djinn, as he once faced a similar experience.

The djinn’s final story concerns a young academic named Zefir (Burcu Golgedar) who was forced into marriage at the age of two. Her husband was many years her senior and favored her over his two older wives. Zefir began to pursue her studies after failing to satisfy her husband’s physical needs, though he eventually gifted her with a bottle. Finding the djinn inside, she first wished for greater knowledge. After he djinn fell madly in love with Zefir and she wished next to see the world through his eyes. While this wish helped her studies even further, she eventually became overwhelmed by the large influx of information and the djinn’s presence. The djinn offered to stay in his bottle until she felt better, but she instead used her final wish to wish that they had never met, causing her to forget all about the djinn. 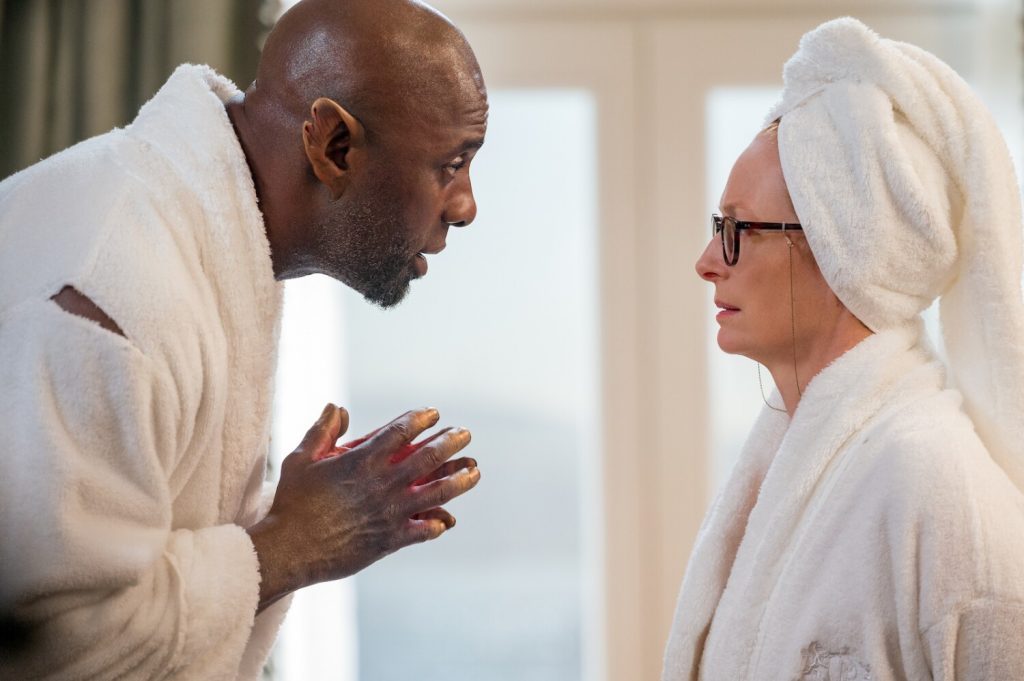 What Does Alithea Wish For?

With the djinn’s stories finished, Alithea has been moved by his stories and makes her first wish for them to fall in love with one another; the two embrace one another. Bringing the djinn back to her flat in London, Alithea stands up to her bigoted neighbors, though the djinn encourages her to make amends with them. Introducing them to the djinn, they, too, are taken in by him.

As time passes, the djinn gradually grows weaker as the material that makes up his body is overwhelmed by cell towers and satellite transmissions. Alithea uses her next two wishes to heal him and restore his ability to speak, finally freeing him. The djinn returns to his world. Three years later, Alithea has written a new book based on her experiences with the djinn, who greets her as she sits in a park. As the two re-embrace each other, Alithea narrates to the audience that he would return to visit her with regularity.

Where to watch Three Thousand Years of Longing (2022)

The Next 365 Days Soundtrack: Every Song Featured in the Netflix Movie