Trapped is a ticking time bomb from the moment it starts. The premise of the film is undoubtedly marvelous, the story of a man trapped in his apartment in the sixth most populous city in the world. The first 20 minutes unravel as a detective story, providing clues and looping in the viewers to the seemingly implausible premise. This part of the film is ferociously efficient, and in no time, the stakes are escalated, and the unassuming protagonist lands up in the kind of soup, for which we were waiting for the moment the trailer arrived.

Once the protagonist is locked in his apartment denial sets in and quickly converts to anger. Then starts hatching of ingenious plans, none of which seems to work. The survival of the protagonist exemplifies the horror fantasies of a common man. The balcony shots are fantastic, foregrounding a helpless Rao against the daily hustle and bustle of the city, in particular, is ingenious, and in a strange kind of way reminds me of a lonely Sandra Bullock looking at a colorful earth in Gravity. One of the shots actually makes us squint and find Rao pointing a light from his balcony, amidst a bunch of high rises with lights flickering in from all directions. 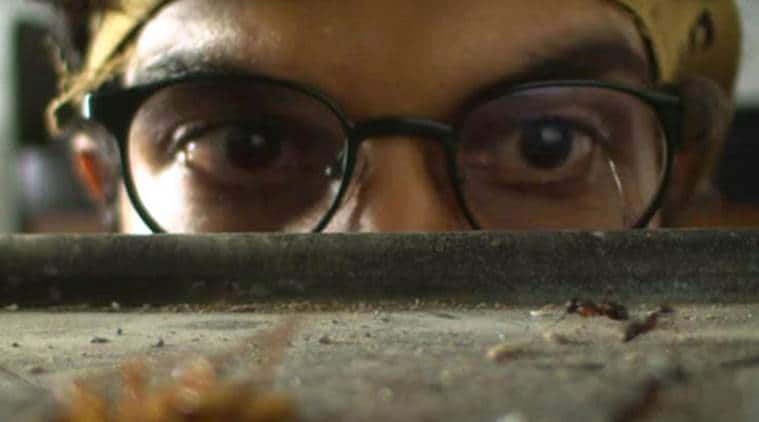 Any kind of survival film demands nothing less than perfection from its lead, and Rajkummar Rao delivers just that. He plays the role of a man, who though determined, is too shy, and doesn’t quite think of long term. The instantaneous fear of a rat is more powerful to him than fetching water for survival. Cameras zoom into him all the time, to create a sense of claustrophobia, and Rao’s acting never disappoints. Gitanjali Thapa is endearing in her short role.

Siddharth Diwan does a fine job with the camera, as I have mentioned earlier. Another very noteworthy point about the movie is the insane sound design and sound mixing, very rarely seen in Bollywood. I looked it up and Anish John is the Sound Designer and Mixer, who won the National Award previously for Labour of Love, a film that I completely adore.

Motwane has always been a confident filmmaker. He knows his craft well enough to make Trapped an edge of the seat affair. However, the best parts of Trapped are the few minutes at the end, where Rao returns to the monotonous life of his middle-class existence, trapped within the walls of his office, buses, and trains. Trapped is a story of urban isolation, where we live inside walls of our own, and in an attempt to break free from them, Rao is trapped in between another set of walls, which are not quite inconspicuous as the earlier ones.