Even before one can anticipate the nerve of a filmmaker to fuel a narrative feature on a pandemic with comedy, Palestinian-British filmmaker Basil Khalil clears the air about the truth. A Gaza Weekend, premiering at TIFF, was conceived as long as a decade ago (although some of the jokes do land at the expense of COVID) and only made its way to the screen in 2022. The follow-up to this decade could make a separate feature itself, as Khalil reportedly shared the idea with an agent in Cannes as impromptu. That was 2009. Meanwhile, his short Ave Maria was nominated for an Academy Award in 2015, and then the pandemic happened- providing A Gaza Weekend a haunting shadow of realism.

A Gaza Weekend follows an even more idiosyncratic story, laced with sufficient nuance. It follows a British TV journalist Michael (Stephen Mangan), and his Israeli girlfriend, Keren (Mouna Hawa), who find themselves at the center of a cataclysmic pandemic with the outbreak of the deadly virus called Aggravated Respiratory Syndrome or ARS. Gaza is now considered the safest place on earth, as Israel is cut off from the rest of the world. They are now in the largest “open-air prison” in the world. 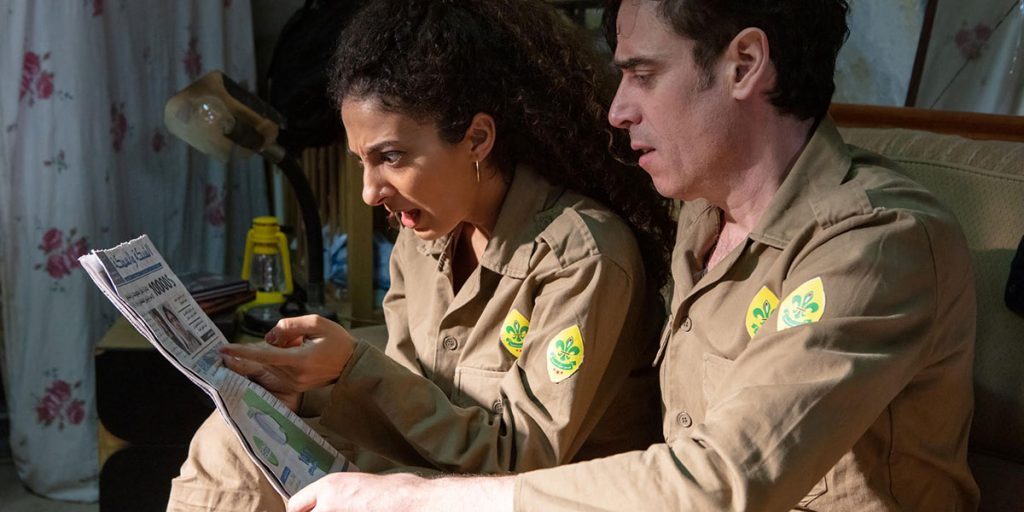 The only way out is through a boat or a yacht, but surely these resources are first used by the rich. Seeking an escape, they find Emad (Loai Nofi) and Waleed (Adam Bakri), two Palestinians who don’t mind a little deal to trespass. Things don’t go according to plan, of course. Overflowing toilets and diarrhea jokes abound in the meanwhile.

You have been warned. If political correctness is something that you look forward to in a film, then A Gaza Weekend is not for you. Director Basil Khalil and co-writer Daniel Ka-Chun Chan walk through a tightrope of checkpoints here, satirizing the very conflict between Palestinians and Israelis to its morbid extremism. In tracing so, the film leaves grace notes of humanity intact. At one point, amidst all the chaos, they find themselves stuck beneath the home of a police officer. There are more to come- with bombings and bodies piling up, while the endeavors do not stop. The situational humor is evened out with the dark reality that looms in the background for these characters who just want to stay alive.

A Gaza Weekend has so much going for it. Some of the takeoffs don’t land where they should. Perhaps a second viewing might help, in that regard, to fully appreciate the situational comedy.

Comparisons with Jojo Rabbit, or even Life is Beautiful, are neatly sidestepped as A Gaza Weekend places a comedic overtone that does not always even out the realism. The irreverence makes the entire journey a worthwhile one to participate in, suited by a cast that sells the weirdest situations with smart performances. A special word for Hawa, who is a riot in some of the early scenes- constantly shifting and spacing out.

The question might arise whether there was a need to place comedy when dealing with such a complicated subject matter. Khalil’s approach might offend, as he takes a cartoonish approach that disguises reluctance with resistance. There is a difference in the way A Gaza Weekend chooses to shed light on the politics involved. At one pivotal moment, a character says, “Your nightmare has been our reality for a very long time,” and that is enough. Khalil wisely infuses a transformation through the narrative’s deliberately farcical approach. Not as endearing, perhaps, but it still bites.

Raphael Mizrahi’s cinematography keeps the proceedings- and there are a ton of them- graspable, aided superbly in the edit table by Shahnaz Dulaimy. A Gaza Weekend feels exasperating as it reaches the second half when things get a little too situational to match up with the rising pressure. I will not spoil things for you here, but this is definitely not a film for you to feel neutral about. Perhaps it could have hit a perfect serve if the moments which build up with the central relationship were given as much importance as the bumbling, often exhausting moments of escapades. A Gaza Weekend makes sure for quite a gala time. Laugh at your own expense.

Where the Crawdads Sing Soundtrack: Every Song Featured in the movie