“Older people make good grandparents, no matter how they were as parents.”

A Chinese father visits his estranged daughter living in America. She receives him as if out of obligation. He exclaims that she looks just the same as he had last seen her. She smiles, “that’s not possible”. It has been twelve years. “Perhaps it’s America,” he says quietly, “it makes you look young”. A Thousand Years of Good Prayers opens with meticulous shots of the father, observing for the first time, the American lifestyle of his daughter. He knows that she has changed a lot, and stays reserved most of the time. Her recent divorce hovers over the narrative but they don’t talk much about it. He thinks he can heal her.

While she is away on work he goes about cleaning the place, arranges the things randomly scattered around the house, and tries to bring some sense of order in their microcosm. The space outside affects the space inside. Arranging things in the house to make it look neat can help unwind the knots of the mind. All you need to do is get into action. The elderly somehow know this better than the young. My mother, for instance, won’t look for a philosophy book if something is bothering her. An afternoon spent ironing the cloths will do it for her. And this is what Wayne Wang, the director of the film, focuses in the early scenes. These silent scenes, of the father going about the spatial sorting, are beautifully contracted and are a joy to watch if you have the appetite for patiently moving cameras, because the effect here comes out of the depths of the characters, out of what they do wordlessly, not  by how they emote the contents of the screenplay.

Some of the touching scenes of the film are set on the dining table, when the father tries to make his daughter eat well:

“Are you happy?” he asks finally, at the same time being careful not to indulge too much into her privacy.

“But you are so quiet”

“You were also quiet when younger. That doesn’t mean you were unhappy”

There are buried secrets, and the film is not about how the two will come to terms by revealing them. There is a hint that the daughter may marry a Russian guy. The father who always introduces himself as a retired rocket scientist may not be one, and there is a mention of his early affair with a woman. “We used to talk. That’s all we did,” he explains. But explanations are not needed at all. They won’t make any difference. I have seen many Indian films about generation gap, but most of them are one-sided, and in many of them children are the main culprits. They are usually the ones causing havoc on a respectful father who raised them with great love and difficulties, or treating their mothers as servants. You too have seen those entertaining flicks from the eighties. It’s true that those films reflected part of our society, but they couldn’t resist antagonizing, because without an antagonist, be it a stone with magical powers, there is no drama. So either one of the parties (be it parents or the children) had to bear the brunt for heightened melodramatic conflict, or entertainment value. Of course, a material like that is easier to handle than to weigh each character with their own flaws and then to observe how their interactions bring forth a drama. 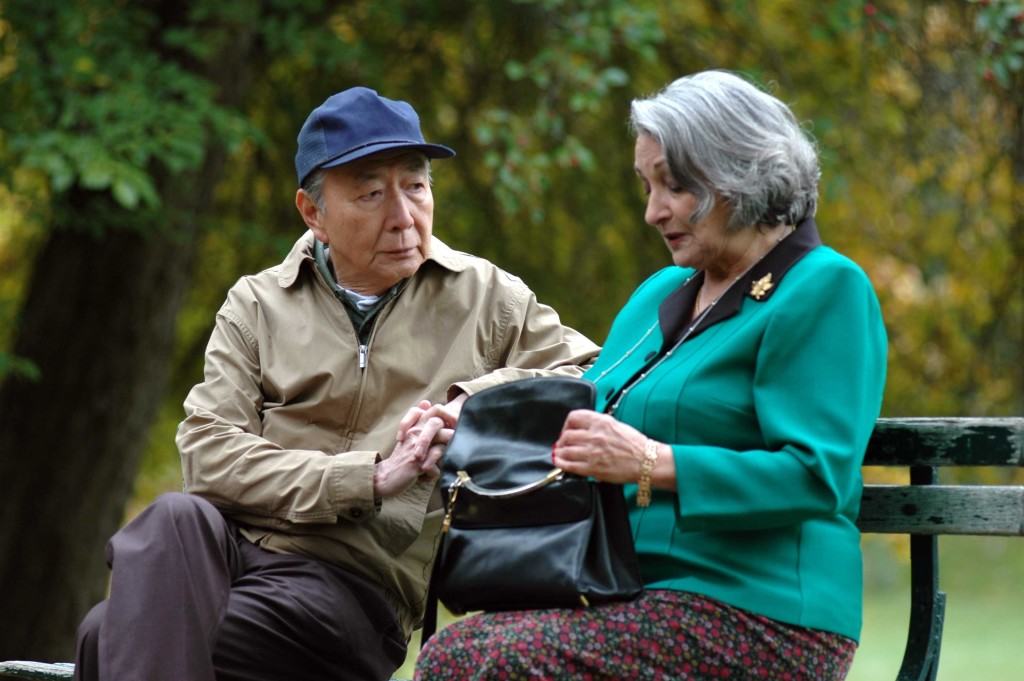 This film is not about simplistic, unrealistic demarcations. There is no antagonist here. It is about good people and their inability to communicate. He may not have been a good father, but he is eager to become a grandfather. “Older people make good grandparents, no matter how they were as parents,” he says to his daughter. The viewer is not presented with long monologues of what went wrong. We just get snippets, and they are enough. Wayne Wang said in an interview that he chose to make this film because it reminded him of all the Ozu films he so admired when he was a film student – which seems like an intriguing nugget on the film’s conception, because having read the short story by Yiyun Li, on which the film is based, I believe the style of its making may not be an obvious choice. You would have to be inspired by Yasujiro Ozu to tackle this material in calmly constructed set-pieces.

It so happens that we tend to share our most intimate desires and secrets with friends or strangers, but not with people of the same blood. And this communication gap increases even more when we are geographically apart. The father, played emphatically by Henry O, meets a Persian woman in a park. He refers to her as Madame. They cannot speak each other’s language but they meet every day to communicate with gestures and broken English. It is not difficult to notice his need to explain himself whenever he’s around her. And it is not difficult to realize his urge to communicate with the woman he was apparently having an affair with years ago. It may not have been an affair at all. They used to talk, that’s all. Something he couldn’t do with his own people.

Made in 2007, it is an easily forgettable film. Maybe, because it has no inherent urgency, but it may be most enjoyed if the viewer is also in a similar state of mind. It reveals no ground-breaking secrets about relationships, but it succeeds in hinting at a sad truth: people create joyous spaces of their own together, and then move out of them, often scarring one another, to create other spaces with other people. No one is at fault here. We are built like that.

Jigar works as a software professional. His idea of a well-spent rainy afternoon is a hot cup of ginger tea, a bowlful of snacks, and an intriguing Hitchcockian thriller. Apart from movies, literature, eastern philosophy, music, his mind occasionally swings from one thing to another, but he finds consistency in expression. His stories are always in-progress.