The broad strokes of the narrative are fairly predictable. The spy thriller sub-genre’s staple elements like the betrayals and shifting loyalties occur at the expected occasions. We perfectly know where it’s all headed. Yet, the delight lies in watching how director Kim Jee-woon guides us to the familiar destination. Like his previous films, he takes interesting detours which raises the narrative above its genre trappings. 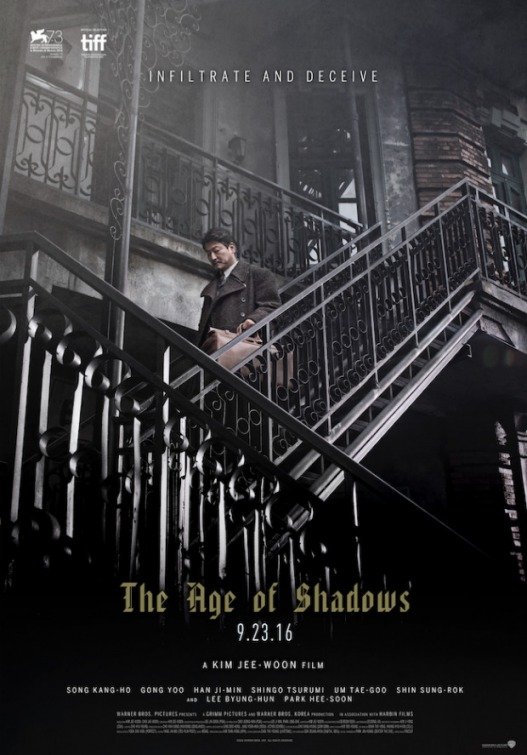 The modern Korean film-makers are the best genre re-generators. While paying tribute to the genre movies of their cinematic ancestors, they also set out to subvert and reshape them, turning the film into more than a genre spectacle. Kim Jee-Woon is one of the best Korean directors to have gradually worked through different genres in each of his films. He started his directorial career with two exciting black comedies (The Quiet Family & The Foul King), but delved fully into the darker territory with his wonderful atmospheric horror A Tale of Two Sisters (2004). In the action/drama A Bittersweet Life (2005), he took the simple story of a loyal henchman and surprisingly turned him into a character reflecting existential crisis, like the introspective heroes of French auteur Jean-Pierre Melville.  With ‘The Good, the Bad, and the Weird’ (2008) Kim went to hilariously reconstruct the spaghetti western genre. Then followed it up with his most stylish and bloody movie I Saw The Devil (2010) – a musing on the banality of evil. The Hollywood entry The Last Stand (2012) is perhaps his weakest movie (an average entertainer) and missed his singular touch. In his recent film The Age of Shadows (2016), director Kim has forayed into historical fiction that emits coldness of a John la Carre story as well as the ferocity of pulpy action/thriller.

The Age of Shadows is set in the 1920s when Korea was under Japan’s colonial rule. It’s a simple espionage action which tracks down the transformation of Captain Lee, from being a selfish Korean officer (in the Japanese police force) to a committed Korean revolutionary. Since Captain Lee Jung-chool is played by the excellent Song Kang-ho (Memories of Murder, Thirst, etc), he easily makes us care for his character. The narrative opens with a brilliantly choreographed action sequence, where a most-wanted resistance fighter Kim Jang-ok is caught in an ambush set by Captain Lee. Large numbers of Korean soldiers are deployed to catch Kim alive. But as the gunfight commences, the soldiers dash through tile roofs, as Jang-ok scoots through the cramped streets. Lee’s attempt to pacify the resistance fighter eventually fails, but the whole action sets up nice pace for the ensuing cat-and-mouse game. There are also other reasons for Lee trying to capture the fighter alive: they were once friends before Lee became a Korean collaborator. 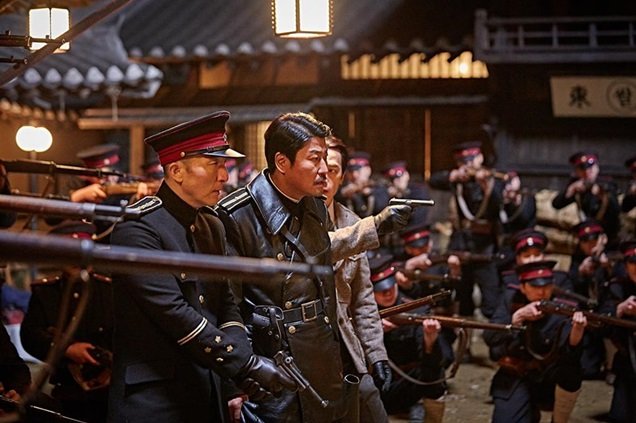 Lee Jung-chool’s Japanese superior (commander Higashi) orders him to go undercover and follow the trail of Kim Woo-jin (Gong Yoo), a rebel who runs an antique shop and photography studio to serve as front for the resistance. A brief introduction is given to the group of rebels working under Woo-jin. The Japanese believe that Woo-jin’s trail would eventually lead them to supreme leader of the resistance Jung Che-san (Lee Byung-hun), based in Shanghai. Under the guise of selling an antique statue recovered from police shootout, Lee hints to Woo-jin that he is willing to switch sides. They play a deceitful social game in the bar. Next day, Woo-jin swoops up Lee to meet the resistance leader himself. They ask Lee’s help to smuggle loads of explosives out of Shanghai. The resistance movement very well knows that Lee may be just pretending to switch sides, but still he is their last hope to wreak havoc against the Japanese forces. The conflict is heightened by the presence of a gaunt, sadistic Japanese enforcer Hashimoto, who competes against Lee to catch the resistance leader.

The broad strokes of the narrative are fairly predictable. The sub-genre’s staple elements like the betrayals and shifting loyalties occur at the expected occasions. We perfectly know where it’s all headed. Yet, the delight lies in watching how director Kim Jee-woon guides us to the familiar destination. Like his previous films, he takes interesting detours which raises the narrative above its genre trappings. There are two narrative strands that recur in Kim Jee-woon’s works: one is protagonist’s detour into a concealed hell; the other is the character’s relentless pursuit to achieve a desire or target (however impossible it is). Director Kim uses such common factors in the second-half of the movie which circumvents viewers’ expectations until the climax. He neatly cuts up the plot advances and action in the astounding half-hour train sequence, which ends up with a tense moment that feels like the victorious climax. However, the director soon zeroes-in on unbearable truths and corruption of the evil. These scenes try to establish different shades of the characters which we didn’t know existed. The dashing Woo-jin mutates with his self-imposed silence, while Lee Jung-chool’s stiff shoulders is weighed down by frustration and torment. Despite director Kim’s intentions, Age of Shadows does feel too stretched-out (for its own good) in these parts. It doesn’t elicit much of an emotional response (especially the fate of Yun Gye-soon whom we only saw as a pretty face under a red-hat). 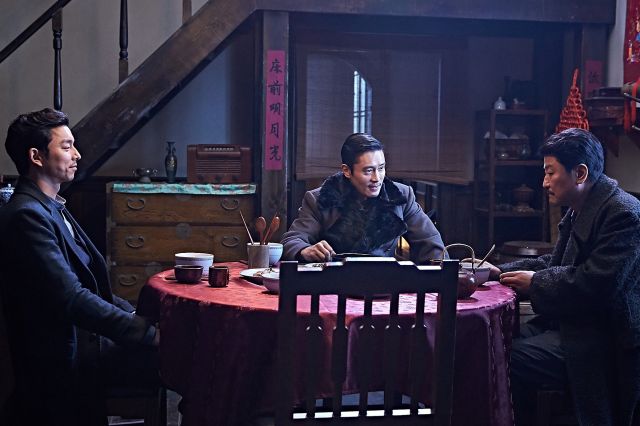 In the first-half, Kim slowly builds the momentum so as to generate crowd-pleasing moments of violence. In the second-half the violence makes you look away as the character’s inner turmoil are exteriorized through their physical injuries. Technically, Kim Jee-woon & his team excel as usual. The backdrops of Shanghai, Gyeongsan railway station or the train are richly detailed, often suggesting the shadows or deceptions resting at the back of bright spots. The rain and dark pathways set-up evokes the mood of noir thrillers like The Third Man (1949). There are also few beautiful dissolves to interlink scenes just like in the movies of classical era. Of course, Kim Jee-woon doesn’t always stay restrained. His trademark mayhem sequences cranks up the tension and sometimes so much fun to experience (for example the distinctly Korean face-slapping scene). Another strength of the film is the lack of heavy-handed dialogues; none of the fake sermons to stir the so-called patriotic sentiment.

The Age of Shadows (140 minutes) is a superbly crafted genre extravaganza with first-rate performances. A familiar cat-and-mouse game worth watching for the wealth of character details and backdrops.