In Ananta (The Eternal), the shifting play of sunlight leaves spattered on stairs and the windowsill, water drops and a thickening puff of cigarette smoke on its ascent are all key visual motifs that the director, Abhinandan Dutta, keeps returning to. The emphasis is on the gentleness, however, of a beating, palpable tension within the said primary images, but the forcefulness of the visual language, in stringing them together, greatly undoes the intended effect.

This is a film that conspicuously seeks to defuse a tight narrative thread, privileging the capturing and conveying of a mental state that is in a silo unto itself, separated from considerations of time and spatial constructs. Yet, paradoxically, the too keenly felt directorial need to cohesively knit the images and draw them into a disturbingly, awkwardly neat connection between one shot and the immediate next, sucks the wind out of the film very early on.

This unlocks a broader conversation about the very meaning, reach, and the utmost cap for containing the desired stimulation, within an image. Filmmaking is about the condensation of meaning-making within image and sound; what happens when both seem to exist in an over-directed relationship that over-relies on the latter and the former just becomes an add-on, the writing and underlying thought visibly struggling to accommodate both? Ananta is a classic example of this.

Related to Ananta (The Eternal) – I’ll Show You Mine [2022] ‘SIFF’ Review – A clear-eyed, radically frank look into sexual exploration and trauma

The film’s central two characters, the man and woman, are kept nameless, occasionally referred to by their nicknames, Shubho (Ritwick Chakraborty) and Mishtu (Sohini Sarkar), by their parents in isolated scenes and flashbacks, that run parallel to the present-day circumstances. The man stays secluded in his house; he is jobless and lives off the rent of his tenants. His friend, both in his sober and drunken state, keep pestering him with one question; ‘don’t you get bored staying in the house all day, doing nothing? What do you think about all day?’ To exacerbate matters worse, the dialogues are painfully plodding and occasionally ridiculously waxing; the man responds by saying that all he is doing is waiting for time to end. This conversation I remember has been foregrounded in the film several times, like so many other things in it, to a significantly pointless consequence, except an underlining of the drab monotony which either few characters have chosen to inflict upon them or tiredly resign them to.

Characters are buried beneath un-negotiated histories of unprocessed grief and loss; the man and the woman are stuck in a limbo, jaded and having lost all want to situate their identities and feelings in a healthy, communicative vocabulary. Their wounds have settled into permanence that keeps them far and distant from any emotionally functional engagement with anyone at all. We are told the man quit his job the day his mother died; her shadow on his entire being and the way he opts to inhabit his life spreads out all too disruptively. He spends hours watching water drops slide off a flower, a visual that directly carries over into the successive shot of drops cascading off his mother’s sari in flashbacks that mark the narrative intermittently.

In unimaginative slow motion, the son’s relationship, which borders on the wide-eyed adoration and awe, with his mother receives a foundation in the film. For a film that centers one of its primary characters’ pent up issues on the maternal, it is curiously strange that it is unable to either portray the man’s obvious immense dependence on his mother, beyond the customary childhood phase treated in a hasty, unremarkable manner or locate the precise contours of the loss derailing the mapping of his life completely. Spare storytelling works only when the teller is confident and agile in their brushstrokes, the emotional notes in the narrative urgent and bestowed with a capacity to tightly hold a richness of memory and history altogether within a few brief minutes.

Ananta possesses none of this because the writing is tonally flat, the lyricism in the telling coming off as gratingly heavy-handed and jarring and thoroughly out of sync with the inherent narrative scope. The man and the woman keep crossing paths on the stairs and in the same alley, realized in a metaphorical state. The stairs are lined with scattered leaves; sunlight adorns them lovingly. There is a clock with its time fixed only between a specific one and half hour orbit. They don’t exchange a word only till later, all of it playing out in the man’s head. In reality, he simply watches her from his balcony as she is on her way home. The score of a violin thrumming rather vigorously, as if almost nervously and acutely aware of how much a sequence is resting on it to work to some degree, is piled onto the two’s nightly path-intersecting, shoulder-dodging. 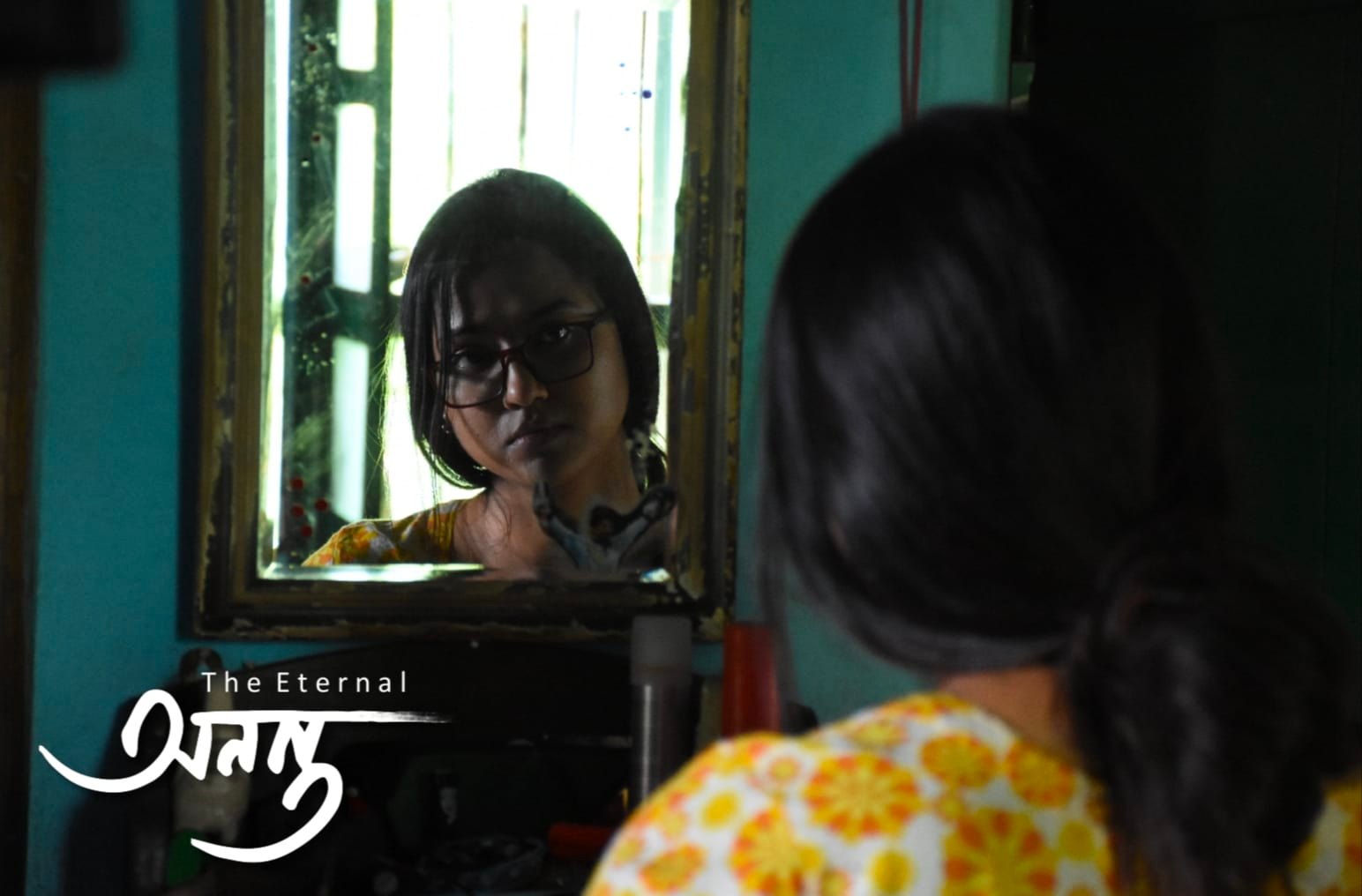 The woman lives with her alcoholic father; she teaches junior kids at a school. Her life is mechanically unbending in its making through the day in its most joyless, drained way, having long succumbed to apathy and sheer disinterest. But we also sense in her eyes a subterranean longing to be more, seek more, only that it would require an enabler to affect the “more” into living, breathing actuality. She is too submerged in her unresolved issues to emerge and forge newer chances at life. Her correspondence with her father is abysmal, cold, and complete emotional disconnection or any real communication; all she ensures for him is do her duties. We are dutifully shown her past scarred by watching an alcoholic father be abusive and be unavailable to her mother’s needs and concerns, wasting him away in a drunken bad-tempered stupor. Yet, all of these, overlaid with a suggested childhood trip to the banks of the Roro River, are so blandly rendered that when Sohini Sarkar sheds a tear; there is no emotional force that is evoked.

Ananta testifies to the perils of stuffing scenes with swell music to amp up feelings; what results however are a dreadful inertness and a determined dullness to all scenes. It is so sober it lends itself to some peculiar amusement at the staunch miserablist tone the film conscientiously swears by. The sharply imposed connection between the two scenes is alienating in its rank stupidity; feet dipping into a bucket of water are succeeded by them slipping into a river in the next shot. Ritwick Chakraborty bravely tries to prop up the film with a committed performance but the burden of a lazy script and an inept vision can befuddle any attempt by an actor to tap the essence of a character with sincerity and persistence. I could see echoes of his performance from The Violin Player in this, in his confounded gaze at the passage of train carriages, among other moments.

The bunch of supporting characters is similarly banal and unengaging. The father overdoes it; the man’s friend is straight-up annoying in his silliness and the woman’s suitor not even registering his presence. Traces of Buddhadeb Dasgupta’s filmmaking lineage are visible in Ananta but the direction is just so flaky, loose, and also over-stressed about its supposed graveness that it all crumples like those brown leaves at the film’s closing.

Ananta (The Eternal) screened at the 2022 Kolkata International Film Festival

Mishan Impossible (2022) Review: The Story of the Three Not-So Musketeers