Aloof from the crowd in the deep, narrow lanes of South Kolkata resides a forgotten old man, a lost jewel- Subir Banerjee. We all know Apu by his name, a child that has won millions of hearts with his innocent face and glowing eyes but how many of us know Subir Banerjee, a grumpy man trying to pull together the remains of his life. Kaushik Ganguli’s “Apur Panchali” is a tale of Apu beyond the bioscope. The director binds up the tale in one line and says, “You may leave Cinema and move on but sometimes Cinema doesn’t leave you.”

As the thunderous applause around Pather Panchali (1955) faded away, the child who played Apu’s role – Subir Banerjee – also saw his identity fading away. Now he in his early sixties is leading his bitter life as a recluse. He has cut all strings that connect him to the world of cinema and has curled up in his apartment as if he never existed. He spent all his life in desolation. Then one day his deathlike tranquil life was stirred when Arko, a student from Satyajit Ray’s Film and Television Institute approached his doorstep. Along with him he brings Banerjee’s recognition back to him once again in the form of a letter- an invitation from Germany to accept the award for Best Child Actor in history of cinema. 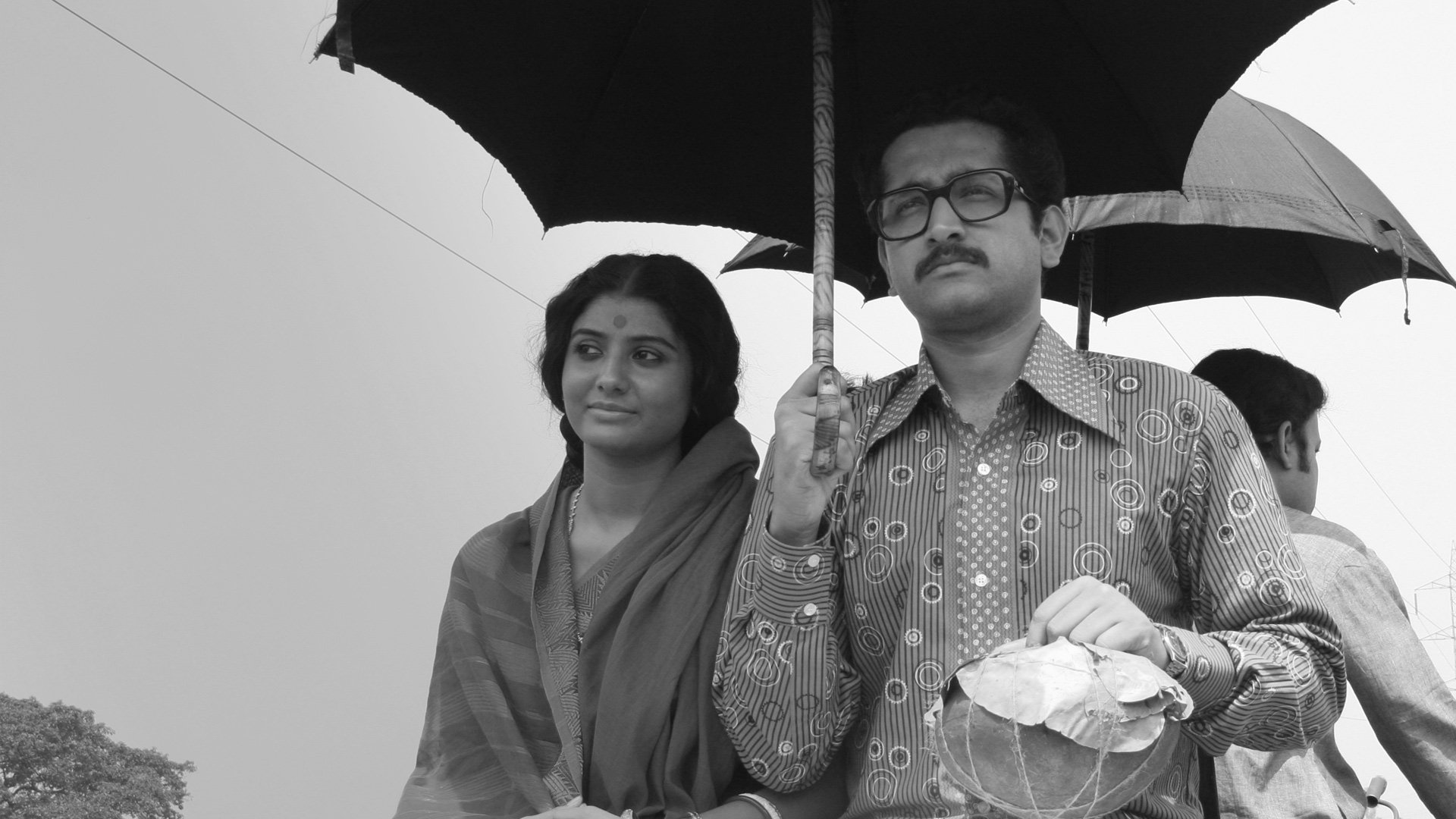 It takes a lot of persuasion on Arko’s part to thaw the cold demeanor of Banerjee. Alongside, Subir narrates his life incidents to Arko which resemble much with the life of Apu as shown in Apu Trilogy- unemployed young man, his dying father, pushed into a marriage, gradually building a relationship with his wife, wife’s sudden death whirling his life topsy-turvy and him trying to grab all that he can, eventually ending up reuniting with his son and both of them start life at a fresh note.

With much similarity in Apu’s and Subir’s life, there are some contrasts as well. The doors that Apu left open are closed by Subir and the doors that Apu closed are reopened by Subir. The iconic train scene in “Pather Panchali” is a metaphorical threshold between the traditional and modern world that Apu crosses, marking his entrance into the modern world. Here, we see Subir has closed all doors between himself and the world – squinting at the camera flash, erupts at the idea of press conference and is quite surprised to know that the photos nowadays are done digitally. In Apur Sansar (1959), the grown up Apu abandons his son and travels to different corners of India while here Subir takes the responsibility of Arko by not denying him as his son and heads to Germany.

The film draws parallel lines between the real and the reel life of Apu, cinematographed parallelly in colored and black and white frames. The past life of Subir, that he narrates, is in gray scale, juxtaposed with archival clips from Aparajito (1956) and “Apur Sansar”. Shirsha Ray fuses his cinematography with that of Subrata Mitra just as Indradeep Dasgupta’s music follows the notes of Ravi Shankar’s soundtrack; both leaving no gaps ajar. Bodhaditya Banerjee’s clips sync so well with Dulal Dutta’s without disturbing the flow of the story.

Parambrato Chatterjee plays brilliantly as young Subir Banerjee who is vexed, defeated and discouraged repeatedly. The older role is taken by Ardhendu Banerjee as a man who has built walls around himself and is like a rock on the outside but on the inside is still a curious, innocent soul craving for acceptance. Parno Mitra is Subir’s wife Ashima- a young, very charming, typical Bengali housewife. Gaurav Chakraborty is Arko- a diligent, young boy who finds himself honored to accomplish the task he is bestowed upon. 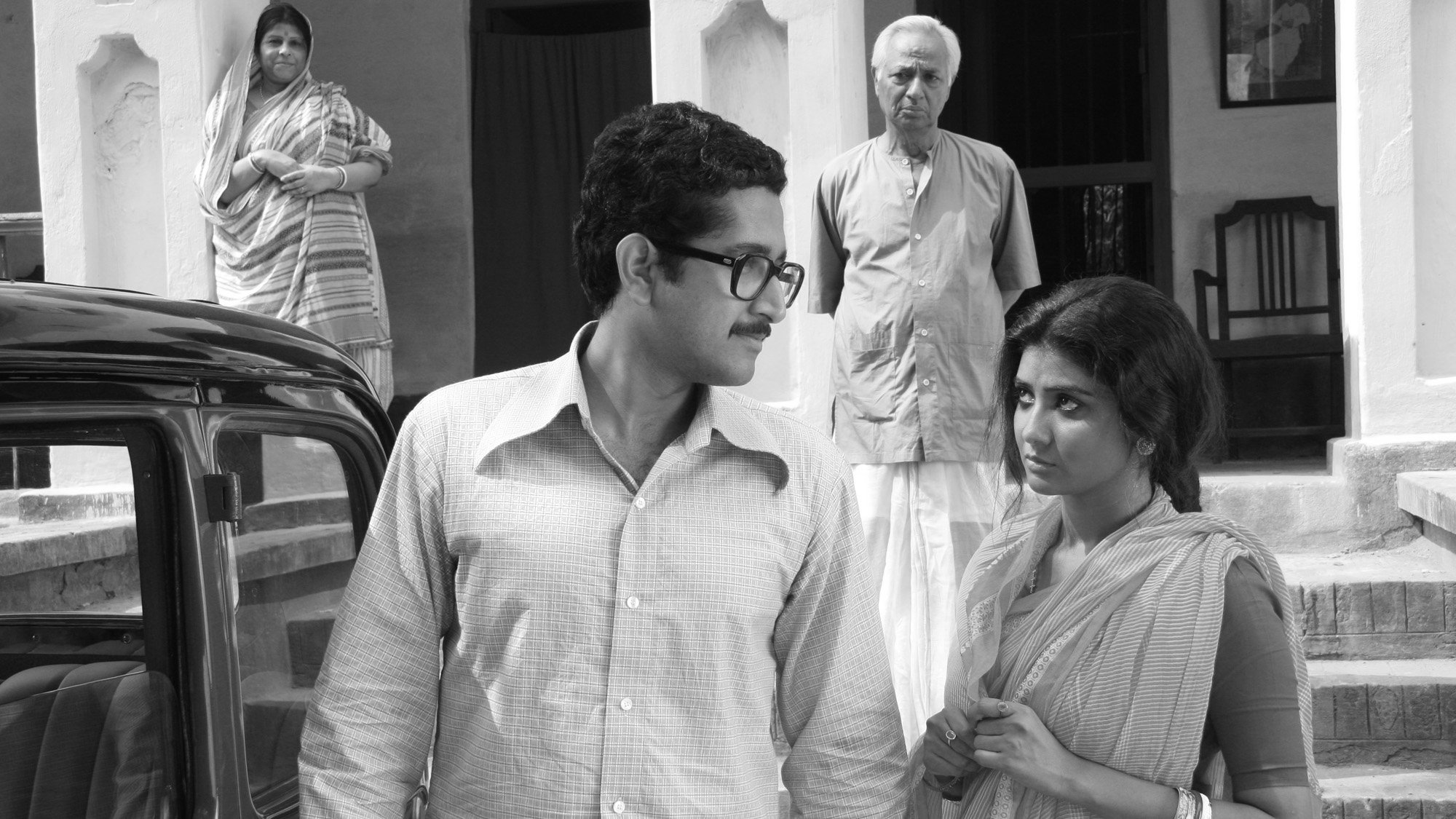 The plot switches between the past and current life of Subir Banerjee with such efficiency that it might have a reverse effect on the audience, leaving them in perplexity as to what is what. However, that isn’t much trouble for a viewer who pays little attention to the narration. Parambrato as junior Subir is cranky and defenseless to see his world shattering, bit by bit. On the other hand, the same man in his older self has grown quieter perhaps because he has nothing to lose anymore. A man who was celebrated globally for his role in a film is now shooed away from a shooting location, is compared with his brother to remind him his incapability and is doing a meager job his will refrains to do.

Apu and Subir have parted their ways after “Pather Panchali” but has Apu ever left Subir, apparently no. Apu was a cherished character as Subir narrates his days of shooting. But now the glory of Apu has been sifted and what stays in the sieve is the remains for Subir. He is upset with Apu because Apu never left him, like a shadow he followed him. “Amaye baad toh dilen, kintu ami baad galam koi!”