Atlanta (Season 4) Episode 4, Recap & Ending Explained: With its continuing excellence through every episode, Atlanta is already considered one of the finest series. Starring Donald Glover, Brian Tyree Henry, LaKeith Stanfield & Zazie Beetz, the series has continually managed to subvert our expectations with its absurdist exploration of the lives of its distinct characters. Its surreal undertones can be compared to the likes of The Sopranos and Twin Peaks, while its humanist portraits deserve praise on their own. The sheer variety of subjects the creators manage to present within its 10-episode season span is astonishing.

With a grounded approach, this week’s episode delves into the topic of colorism in the black community, with a family at the heart of its narrative.

The familial relations of Earn (Donald Glover) or any of the characters have not been extensively discussed throughout the series. That isn’t a criticism but a mere observation, making the recent episode even more amusing. We see glimpses of Earn’s relationship with his parents in the first season when he visits their home. The first thing his father asks is whether he needs some money. It seems like a culmination of past events and describes the family dynamics that have almost come to a transactional phase. From a struggle to survive to being a successful manager, Earn has undoubtedly come a long way. His outlook on his family and future has changed quite a bit, and the new episode navigates that along with other subjects. 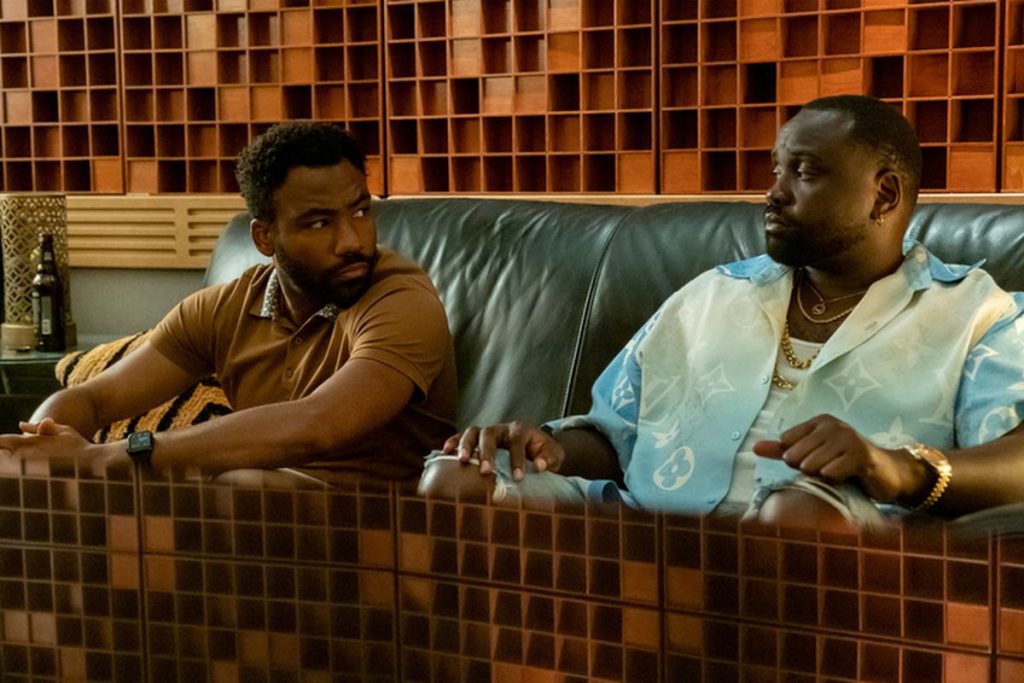 Titled ‘Light Skinned-ed,’ episode 4 is written by Stefani Robinson & Donald Glover, while it is directed by Glover’s ever-reliable collaborator, Hiro Murai. It starts with Earn patiently waiting outside his parent’s house for his mother, Gloria (Myra Lucretia Taylor). She compliments his new haircut, and through their conversation, it seems like they are meeting after a while. She keeps looking for her keys in her purse, insisting she would drive. When his father, Raleigh Marks (Isiah Whitlock Jr.), passes by, they have awkward small talk. Once she finds the keys, he asks whether the father is coming with them to the church. She mentions he isn’t stating his other work.

On their ride, we see the car’s broken rearview mirror and sense some things being closer than they appear! She mentions that she will pick up Earn’s aunt Jeanie (Michole Briana White) and his grandfather (Bob Banks) on the way. He thought that they were not talking with each other for a while. While Gloria corrects his assumption, she shares how she doesn’t like the aunt living with his grandpa. She even suspects she is using him only for his money and taking care of him just for his wealth. Then she mentions her plan to ‘steal’ grandfather from Gloria since she is not allowing her to have any contact with the grandfather.

Meanwhile, Raleigh goes to the shopping mall for his chore. On his way from the parking, he guides someone about an office formality. While he goes on to buy his new phone, Earn and Gloria head to the church with his aunt Jeanie and his grandfather. This aunt asks about his baby and Van (Zazie Beetz). Knowing that they have not married yet, she tells him to ask for forgiveness from God for leaving her unmarried with a kid and, thus, in sin. When they reach the church, his mother drops both of them off and runs away with his grandfather in her car. They enter the church to find a dramatic, miming choir (white paint on black skin). He tries to defend his mother while she keeps blaming her for being irresponsible.

Earn leaves the auditorium to speak with his father and mentions what happened at the church, which left him stunned and unsure how to act on it. He expects his father to help with it, who leaves him on his own since he is the one dealing with it otherwise. After his call, he peeps inside the choir and listens to the preacher, which is when Gloria approaches him – accusing him of playing a twisted game against her. He tries to rush out by telling her about meeting Alfred (Brian Tyree Henry) in the studio, and she decides to join him.

When Raleigh is window shopping through the mall, a saleswoman (Tatiana Neva) approaches him, praising him for his looks and trying to sell him a hat that she has. Meanwhile, Earn and Aunt Jeanie reaches Al’s studio, where he is engaged in his recording. She orders everyone to go out so she can speak with her nephews alone. Al accidentally blurts something that makes her realize they know about Earn’s mother’s plan. She then calls her other siblings – Willy (Kat Williams) & Pearl (Teresa L. Graves), and accuses Gloria of kidnapping their father.

Both of them laugh at her stupid accusation, after which she breaks down and starts talking about every injustice she has faced living with them. She blames them for treating her differently for being light-skinned. The siblings laugh yet again and tell her that what she went through isn’t because of colorism but because she was evil. She gets furious and decides to call the cops. When they arrive at the studio, she bad-mouths Earn’s mother. One of the cops calls her father and asks about his whereabouts. While he starts confidently, on a strong note, he blurts out something strange that makes her case stronger – about his dependency on her.

The vendor from the mall successfully sells Raleigh a fancy cap, which boosts his self-esteem. However, when he is passing by the cafeteria, a young man makes fun of him for wearing it and bullies him into taking a photograph along. That takes Raleigh’s confidence back to zero and makes him feel utterly ridiculed. Outside the studio, Aunt Jeanie still tries to convict Gloria for Kidnapping their father. While watching it from the inside, Earn tells Alfred that he doesn’t want to end up like them, arguing all the time. Then, Alfred asks the woman at the front desk for a way out – more specifically, for a secret way.

She mentions ‘Shmurda Exit’ (possibly a reference to a rapper by the same name, who exited his deal with Epic Records and found ‘independence’). While it sounds like a spookily secretive route, all it ends up being is walking on the opposite side of the conflict while not looking back. Most of the time, the easiest thing to do is the hardest to think of! Alas, they manage to escape the place of conflict. Later, they meet at a diner with Gloria, Raleigh, and the grandfather. During their meal, Gloria asks the already dispirited Raleigh if he spent in the mall like the last month when their credit card maxed out. This is possibly connected to Raleigh’s self-esteem issue with the growing age that makes him overspend as a sort of self-gratification.

After this interaction, the waiter comes in and asks whether they want to order anything more. Raleigh tries to shut him up and stops Alfred from paying the bill. Meanwhile, Gloria asks the waiter for bread since they didn’t receive it with their meal. The waiter asks if he should add this item to the bill, and she insists on giving it complimentary and packed for home. He keeps denying doing so, and their ongoing argument frustrates Raleigh, who bursts out in anger and orders him to do as asked. On this awkward note, the episode ends—props to a wonderfully grounded direction paired with nuanced writing.