Home»Reviews»Films This Week»Atomic Blonde [2017]: Charlize Theron’s Badass Performance Is Its Only Saving Grace
Films This Week/Reviews

After making a memorable breakthrough in the filmmaking industry with their co-directed actioner John Wick, the year of 2017 finds both Chad Stahelski & David Leitch trying to prove their worth with solo directorial efforts. And while the former cemented himself as one of the finest action directors working in Hollywood today with John Wick: Chapter 2 earlier this year, the latter’s attempts to pull off the same feat fell a little short, for there are a few things that “Atomic Blonde” gets right but its material isn’t sturdy enough to hold it all together.

The story of Atomic Blonde takes place in 1989 Germany, just before the collapse of the Berlin Wall, and follows Lorraine Broughton, a top-level MI6 field agent, who’s sent to the de-stabilized city to investigate the murder of a fellow undercover agent who apparently had an all-important list that would’ve exposed every intelligence agent active on both sides of the wall. Her only contact is embedded station chief David Percival but in order to retrieve the list and deliver the package safely across the wall, she must bring all her skillset into play and can’t afford to trust anyone. 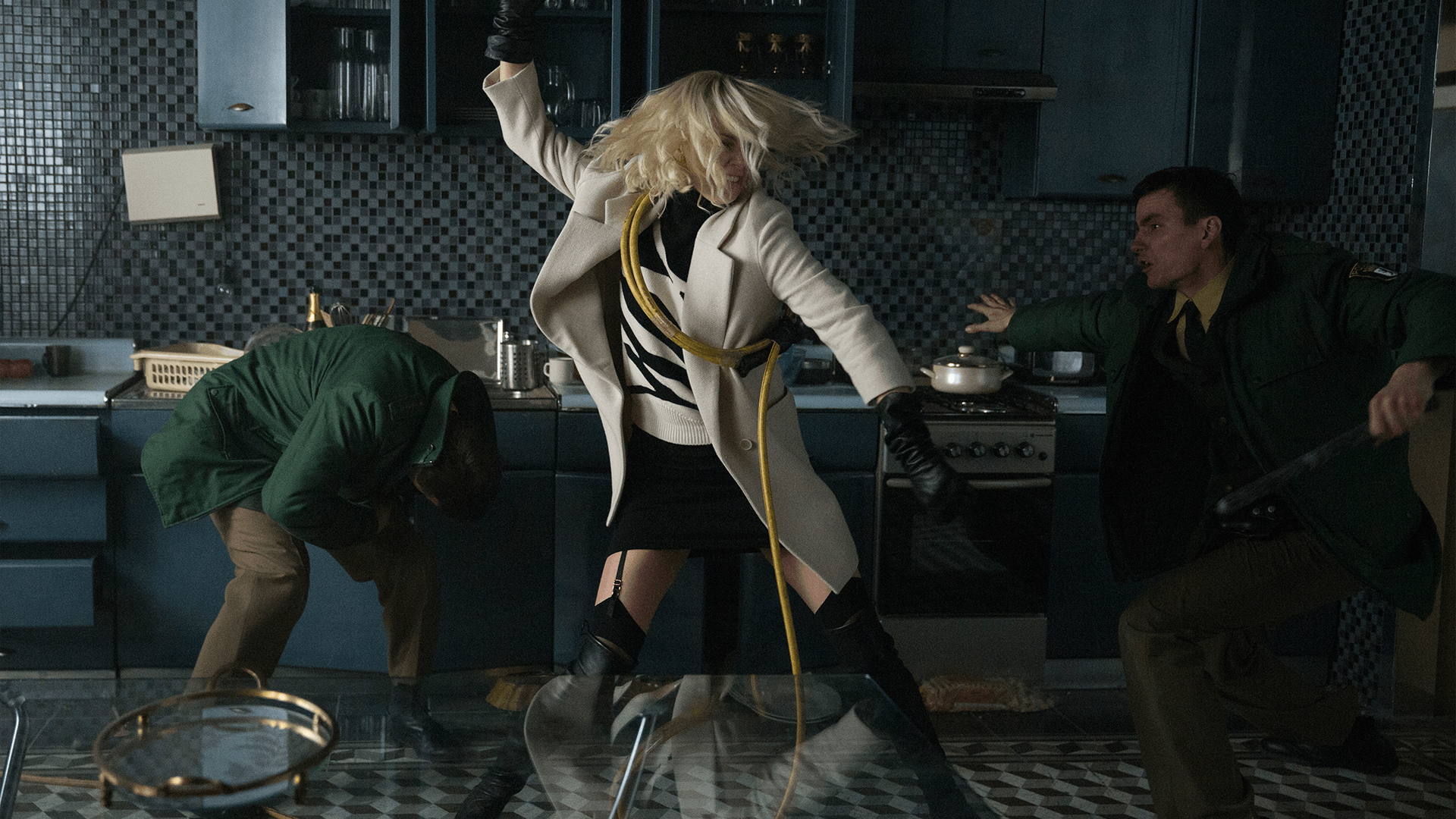 Directed by David Leitch, Atomic Blonde thrills mainly because of its stylishly filmed & ingeniously choreographed action sequences, and Charlize Theron who delivers a knockout performance in her given role. Leitch is at his very best when directing the action segments but whenever the film returns to plot & character development, it’s unable to sustain that same level of intensity. The script packs a weak narrative, its non-linear arrangement only makes things more incoherent, and the poorly written subplots, predictable twists & lack of smooth transition from one scene to another doesn’t help either.

From the visual standpoint, this film looks appealing. The Cold War atmosphere and the feeling of unrest that comes associated with that bygone era is expertly recreated by the production design team, and is effectively sustained by its overcast ambience & apt use of cold colour tones. Cinematography employs the camera with a kinetic zest and makes excellent use of close-ups, long takes & neon lighting to provide additional flavours to its images. Editing is all over the place, for the plot is muddled, narrative flow is inconsistent & pacing is tedious. Lastly, the soundtrack & incorporated songs are in tune with its timeline yet they add a contemporary feel to the final product. 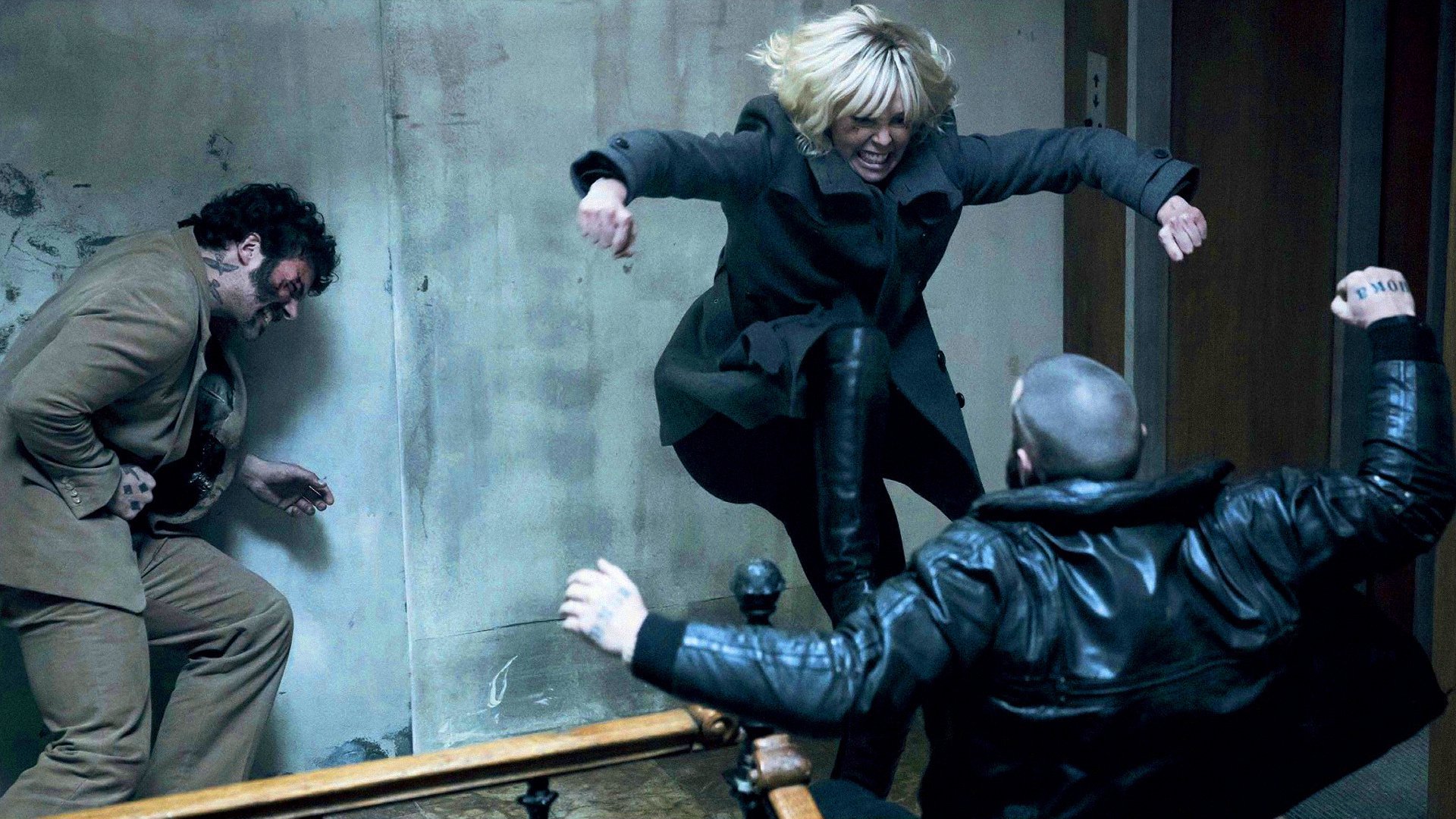 Coming to the performances, Atomic Blonde features a talented cast in Charlize Theron, James McAvoy, John Goodman, Sofia Boutella, Bill Skarsgård & Toby Jones along with a few others, and while most of them play their part sincerely, the the half-baked characters given to them isn’t worthy of investment. Leading from the front is Theron in a swashbuckling display of swag, sultriness & solidity, and she really captures her character’s cold & charismatic demeanour with raw intensity. McAvoy’s character carries an enigmatic quality and the actor does justice to his role. Goodman, Boutella, Jones & Skarsgård don’t get as much screen time as Theron or McAvoy but still manage to do well with what they are given & chip in with good support.

On an overall scale, Atomic Blonde is a stylishly directed, splendidly photographed & brilliantly performed action spy thriller but the blandness in the storytelling section in addition to its messy storyline, forgettable dialogues & clichéd elements fail to set it apart from its genre’s norms. The action is brutal, thrilling & consistently engaging, and I love the fact that those hand-to-hand combat scenes are illustrated as physically exhausting, which is exactly what they are in real-life. Also, that stairwell fight is an instant classic action segment and is quite possibly the film’s highlight. To summarize it all, Atomic Blonde is powered by Charlize Theron’s magnetic input and does entertain in bits n pieces but the interest always fizzles out whenever our protagonist stops beating other men to a pulp.