Bali: The Victim is director Vishal Furia’s second horror outing in less than a month, the first one was Chhori. Yet, Furia, who has consistently worked within the horror genre, seems to have stuck to a set framework- jump scares and illogical situations giving to a particularly straightforward story that could have avoided the theatrics in the first place. In Bali: The Victim, Furia aims to touch on the topic of the medical profession and how it has become another industry picking through commercialization. The intention is noble, but the execution- not so much.

Manadar Sathe (Samarth Jadhav), a seemingly normal seven-year-old suddenly passes out in the middle of a cricket game. Panicked, his widowed father Shrikant (Swwapnil Joshi) immediately admits him to the local Janasanjivani hospital. There’s nothing to worry it seems, but still, the tests are conducted, all the same, majorly looked after by Dr Radhika Shenoy (Pooja Sawant). In this short stay in the hospital, Mandar stumbles upon a child patient named Bhaskar. It is Bhaskar who tells Mandar that his mother Elizabeth lives just opposite the hospital and is a nurse. Mandar helps him get a ladder and reach the window on the first floor. He returns, and after a while, it is revealed that Bhaskar has suffered internal injuries and had to be shifted to an ICU.

Such revelations pile up Bali: The Victim, which takes a route so familiar from the very first scene at the hospital that the end bubbles right from that moment. Furia seems to be operating through a set of stereotypes- creepy kids, dream sequences, and occasional jump scares. The hospital in which Bali is set feels redundant- there are people inside but none outside its main gate. Kids can enter the OT without anyone noticing. It does not help either that the hospital is painted green, and the rooms can easily qualify for haunted houses instead. Furia is especially interested in cross-cutting his scenes to induce terror- and there are plenty of them in Bali, which instead of scaring, does the polar opposite- makes one giggle. Abhijeet Deshpande and Sourabh Prabhu Desai’s editing is incoherent and does not help in building suspense at any point. Given the big reveal is already predictable from a mile does not help as well. 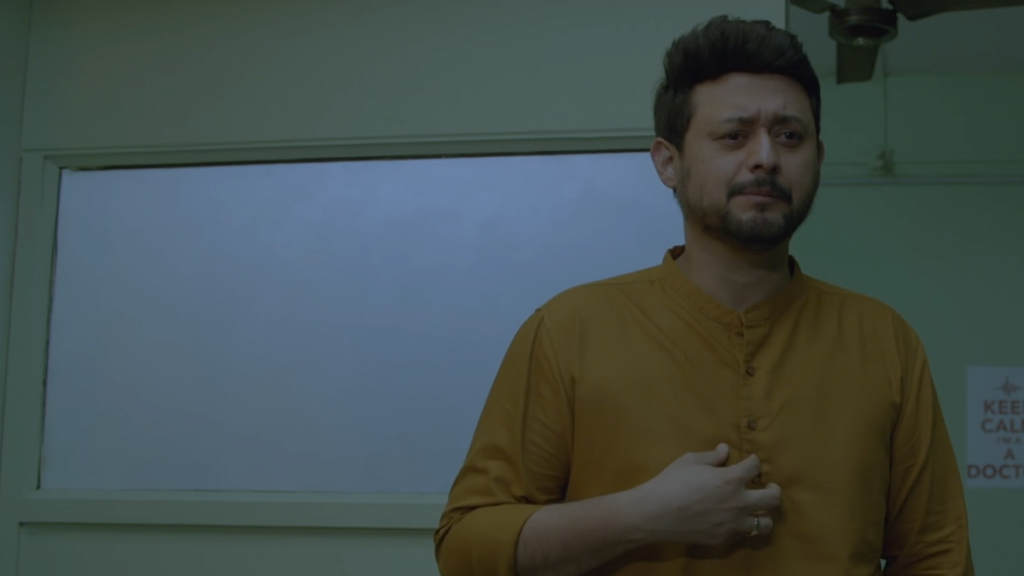 The problem with Bali: The Victim is that it does not know what kind of film it wants to be, at the end of the day. In order to make a choice to show the dark realities of the medical profession, it chooses the horror genre trope which eventually undoes the intention. Furia who co-wrote the story with Swapnil Gupta invests much of the initial scenes in creating an atmospheric strain. Unfortunately, it does not work. The script devotes too much time to decide upon the existence of Elizabeth- whether she is alive or not, to create any real sense of doom or terror. An observant viewer can see through it easily. Bali: The Victim invests in explaining the links and the revelations, it certainly does not trust its audience at all. The loud and bland background score by Ranjan Patnaik and Brince Bora does not help as well.

Swwapnil Joshi is instantly believable as the aggrieved father, and he tries hard to inject some sense to the mayhem that upends his life all of a sudden. But Furia’s script does not give him any space to grow- making Shrikant a particularly one-note character at best. Samarth Jadhav is made to stay in a hospital room for a considerable amount of time, and his actions after a certain point of time become annoying at best. For a horror film that operates through its child actor, there is no clear insight from Mandar’s perspective at all. Pooja Sawant fails to make an impression as the doctor who cries at every other instance in the initial scenes and seems to be the only doctor operating at the hospital in some sequences.

Given that Furia is consistent with the horror genre, it is honestly disappointing that Bali: The Victim stands out like a sore thumb. The intention is there, but everything else is clearly not in his favour. In the end, Bali: The Victim leaves you with an aftertaste of the possibility of what it could have been.

Bali: The Victim is now streaming on Prime Video