Spectacular, breathtaking, Birdman is an exhibition of magic realism.

Michael Keaton stars as an ageing Riggan Thomson, once popular for playing a superhero called Birdman, a superhero franchise which had its last film in 1992, [which interestingly is also the year, Michael Keaton’s 2nd Batman film released] and is now desperately looking for a comeback by appearing in a Broadway play. In my opinion, it is satirically a film on Michael Keaton’s career. [Although Keaton believes that the character Riggan Thomson is the most dissimilar to his real life personality.]

22 years after Tim Burton made his last Batman film with Michael Keaton, who would have thought that the near extinct Keaton will return in such a hauntingly beautiful fashion and deliver the greatest performance of his career. Michael Keaton was arguably the most deserving candidate for last year’s Academy Award for the Best Actor, however he lost to a brilliant performance by Eddie Redmayne in The Theory of Everything. 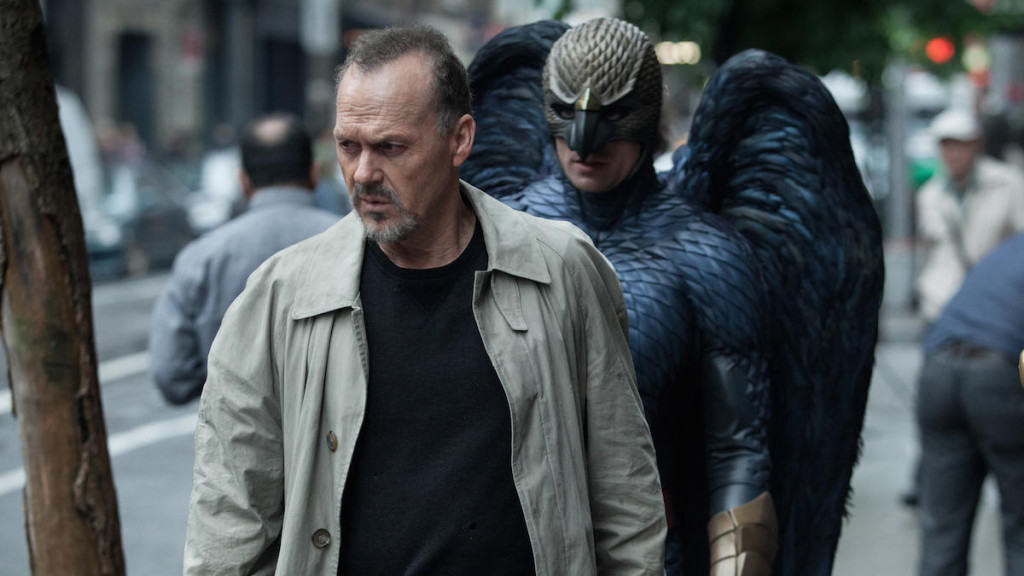 Birdman is so similar to Keaton’s life in films that I wonder, if director Alejandro González Iñárritu wanted to cast a washed up super hero actor to play the lead character in Birdman or actually he wanted to make a film on Michael Keaton’s life after Batman Returns. Whatever the truth may be, there is no one I can imagine who could play Riggan Thomson better than Michael Keaton. Birdman is a satire on Hollywood and its harsh truths and ways. It’s a satire on Michael Keaton’s Career and a parody on Edward Norton’s work style because like his character, he is also a famously annoying co-star to work with.

As the film starts, we see Riggan Thomson meditating, floating mid air in a lotus pose and we hear a voice saying “how did we end up here?” That voice is Birdman’s which sounds like the famous Batman growl. Right from the first scene, Keaton looked intense and a resuscitated man you may never have seen before. It was from that very moment you knew that both Riggan Thomson and Michael Keaton are going to change the saddening realities of their careers.

Riggan Thomson reminds one of Norma Desmond in Sunset Boulevard in a completely different way. Unlike Norma, Riggan doesn’t confine himself to a life that doesn’t really exist anymore, he has an unpleasant reality and he is trying to make it work his post superstar present but somewhere he is still weaved in that alter ego of his. He wants the voice to shut up but he also embraces the superhero mannerism of Birdman with the little things he does; for example when he puts the television off or moves random objects or opens a door using his mind [or he believes he does all those things]. It is left for how we interpret it individually. 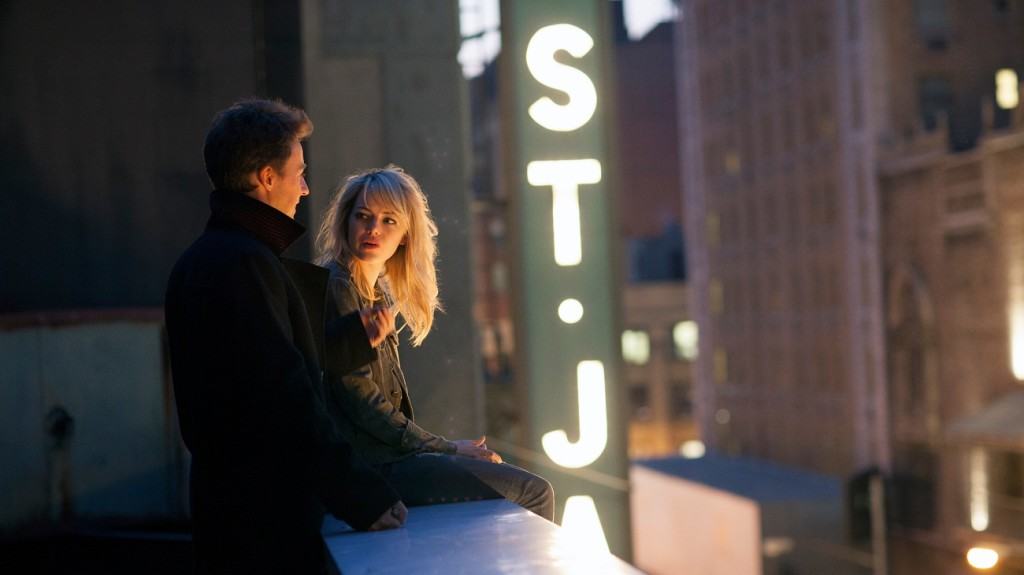 The film’s cinematography is one of the high points of Birdman, it is itself part of the story. Emmanuel Lubezki has done another master work and this time he created an illusion that the whole film was shot in one long take, also a metaphor for life doesn’t have cuts and giving us a glimpse of theaters metaphorically, where every performance happens in one go. He received the 7th nomination of his career for Best Achievement in Cinematography.  This one shot thing is something he mastered in this great scene from Children of Men.

Michael Keaton’s performance was intense and hard hitting as if somewhere in the back of his head he knew that this might be his last big chance to score. Along with Keaton, it is one of the best ensemble casts I have seen in many years. Each and everyone played their parts to perfection.  Edward Norton as Mike is a self proclaimed perfectionist who plays a mysteriously selfish actor but there is something really fishy about him that you never totally love or hate him. Zach Galifianakis was unbelievably good as the producer cum best friend of Keaton’s character; he can really do serious black comedy, bringing out the humor without actually doing a funny scene. There are 4 significant woman characters and one just can’t imagine Birdman without anyone of them. Emma Stones, Naomi Watts, Amy Ryan and Andrea Riseborough play these characters. Each one of them had a different equation with Riggan Thomson. However, Emma Stones outshines the rest of the 3 and deservingly received an Oscar nomination for her portrayal as the messed up back-from-rehab daughter. 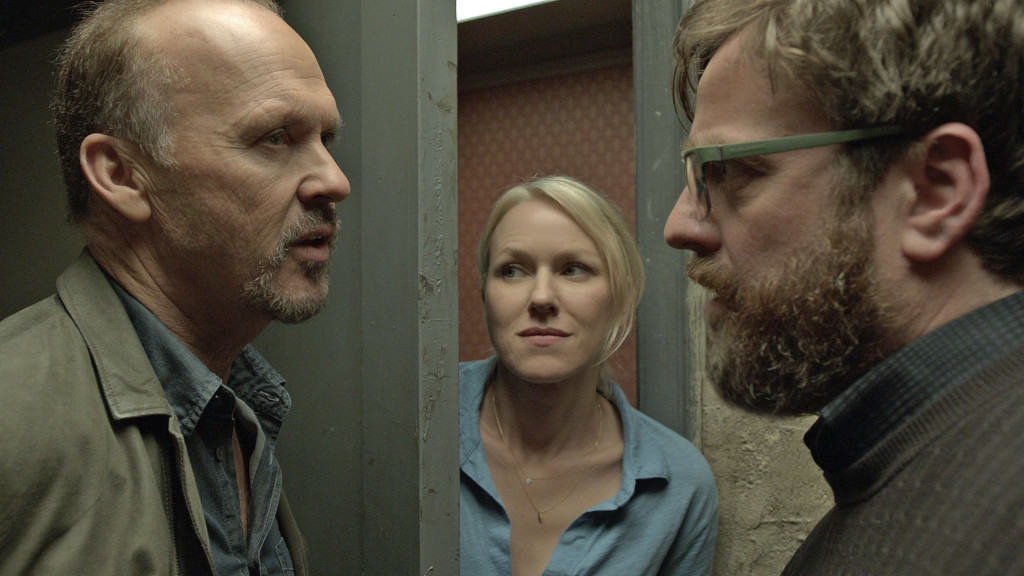 In an interesting scene, Riggan Thomson tells her ex-wife of an incident:

“The last time I flew here from LA, George Clooney was sitting two seats in front of me. With those cuff links, and that chin. We ended up flying through this really bad storm. The plane started to rattle and shake, and everyone on board was crying and praying. And I just sat there– Sat there thinking that when Sam opened that paper it was going to be Clooney’s face on the front page. Not mine. Did you know that Farrah Fawcett died on the same day as Michael Jackson?” Ironically both Michael Keaton and George Clooney played Batman and even though we hated Clooney as Batman, we have seen his career flourish but Keaton never graduated from a mediocre filmography [Apart from a few good films]. This perhaps justifies the question Birdman asked Riggan at the beginning of the movie: “how did we end up here”.

Birdman is poetic, hallucinating and extremely illusive. It has an environment that resembles that of an art-house cinema. It is a passionate work of cinema that leaves you craving for more. As Riggan Thomson tries to regain his lost stardom, Michael Keaton redeemed himself in the process. Birdman is one of the best films of this decade and deservingly won the Best Picture at the Oscars.