Dead to Me Season 2 is now streaming on Netflix

‘Dead to Me’ arises from creators’ acknowledgment of the often-overlooked female-driven content and female viewers. The show gives one of the many reasons as to why more female and queer creators like Liz Feldman are needed, shattering the idea that female films with women at the center are niche experiences.

Aptly embedded within the ironic script, Dead to Me (Season 2) with its slow-sharp sense of humor, unapologetically explores queer romance, sisterhood, parenting, self-love, and femininity. Efficacious in provoking multiple emotions makes the series tough to be boxed into one specific genre but at times could be mostly perceived as a ‘dramedy’.

In broad strokes, Jen (Christina Applegate) and Judy (Linda Carnelliti), forge a strong friendship through grief and later discover neither of them is as innocent as they seem. A bit far from a murder mystery, ‘Dead to me’ in both its season pursues murder cover up with a revealed killer as a mainstay. It offers a chronicle of suspense, hilarity, and gutting grief, engrossing us deep into the intricacies and nuances of Jen Harding and Judy Hale’s character.

Also, Related to Dead to Me (Season 2) – Rafiki [2018] Review: A Gorgeously Shot but Formulaic Queer Drama

The portrayal of the two (enraged, freakish, and savage) female leads, in dark comedy, is bizarre owing to the fact that such genre of comedy is generally reserved for men. The very nature of this series in itself challenges the pre-conceptual male gaze (thanks to the majority of female writers) and violates decorum in simple respect. 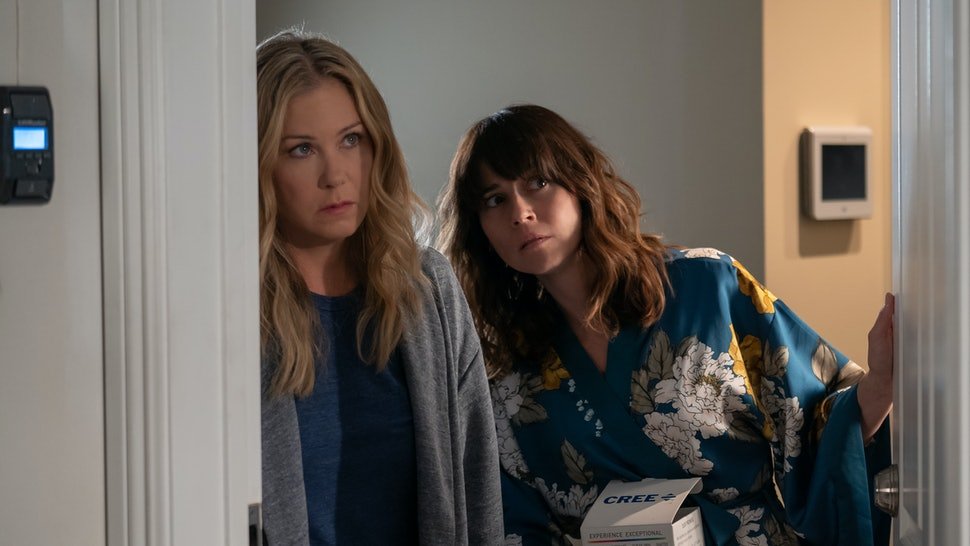 Dead to Me’s debut season in 2019 ended with a cliffhanger leaving its viewers immediately clamoring for season 2. Its return on Netflix this time comes with a reversed relationship subtleties, armed with plenteous spine-chilling endings, leaving the viewers with a wilder and impressive imprint. Season 2 successfully ties back into the authenticity of Dead to Me, through explorations of female complexities on different levels, along with its strong ties to trials and triumph of motherhood of all kinds. The Motherhood dynamics can be perceived as a subtle thread this season.

Feldman as a gay woman herself feels the responsibility to represent and have managed to make the point to include diversified characters. One cannot help but notice this season, the portrayal of Judy’s sexuality (inclination towards Michelle). Feldman successfully shows the normality of it all when the script deals with Judy‘s love interest without making it too fantasized or labeled. Feldman mentions her intent was to simply show what it is like for anyone. She mentions “There’s never a conversation about ‘What does this mean for you?’, ‘What does this say about you?’ It doesn’t say anything. It is what it is. It is the fictionalized embodiment of love is love.”

Also, Related to Dead to Me (Season 2) – Shubh Mangal Zyada Saavdhaan [2020] Review: A Loud & Headache Inducing Piece That Must Be Cautioned Against

The casting of queer-identifying actors like Natalie Morales as Michelle and Max Jenkins as Christopher Doyle, and all the directors being women or members of the LGBTQ community, gives much-needed space to different sexual orientation and gender expressions getting the representation right.

Liz Feldman, the Emmy winning creator and the showrunner of the series makes her trace once again with a strong feminist leaning. The female character dynamics explored in the series normalizes anger, valor, rage, aging, and curse which are often perceived as ‘unpleasing’ on women.

Dead to Me (Season 2) breaks the mold when it comes to the ‘fear of despise’ around the ‘angry women’ character like Jen Harding.  While the angry male characters are often seen as tough, brilliant, and misunderstood, angry women characters on the other hand are considered unlikable. Feldman mentions Jen Harding is that character, who is ‘scary, unsettling and upsetting’. She believes that “An angry woman is powerful; they reject the notion that women are the ‘weaker’. They are uncontrollable. And as we know now, she’s also very relatable.”

The hefty use of F-bombs and witty one-liners by Jen will for many reasons leave anyone in stitches. The writer uses ‘profanity’ as a tool of defying and disrupting the rules of patriarchy that expects women to forever remain within the straitjacket of niceness and politeness regardless of what she has been experiencing. For example, when Jen out rightly shuts down a ‘dude’ in a bar with the one-liner “Read the room, fucko!!” or when she outshouts and publicly shames her molester, Andrew Peter, the sleazebag councilman who harassed her last season,  yelling “I should have hit you harder!”.

Related Read – DISOBEDIENCE [2018]: A COMPLEX SLOW-BURNING DRAMA ABOUT THE FREEDOM OF CHOICE

Jen as a mother of two is seen persistently making sure her sons, in particular Charlie (Sam McCarthy), unlearn the lessons of internalized misogyny. Viewers can take note of Jen often being quick to call out Charlie when he reflexively uses the labels such as ‘crazy’, ‘overreacting’ on women. The terms typically held in reserve to women’s behavior to disgrace them into compliance. The power clearance and the influence of the dialogues make it all worth it.

The Dead To Me creators meticulously bring abuse and trauma into the spotlight as the abusive relation of Judy with Steve (James Marsden) and her ignorant mom (Katey Sagal) unfolds more in Season 2. The more poignant dialogue exchanges between Judy and her ex-fiancé Steve and with her convicted mom does great in adding layers to hollow and manipulative relations they shared, perfectly illustrating what an emotionally obnoxious relation looks like. 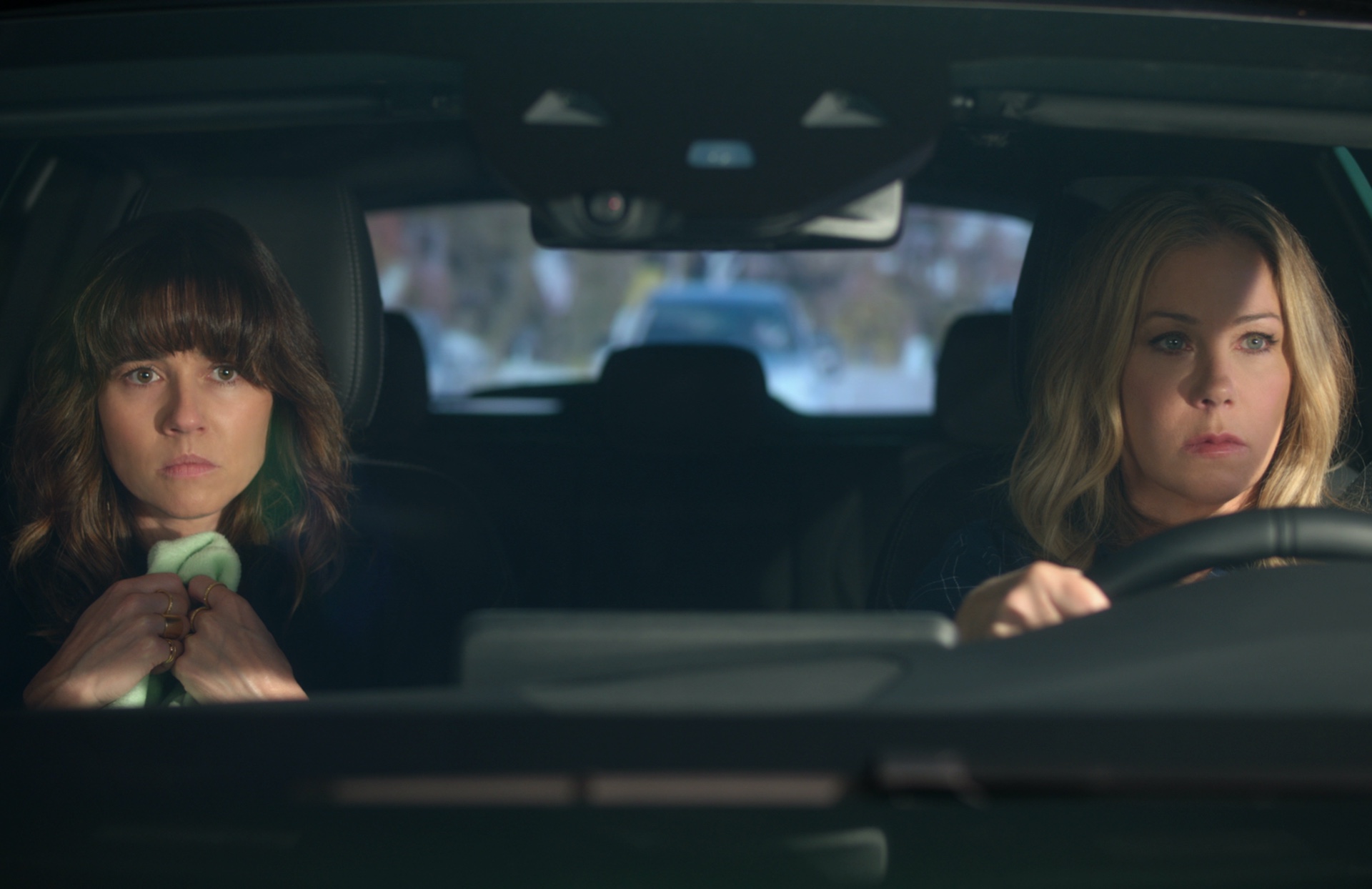 While the story may appear baffling in a moral universe, it is still at its best in keeping alive the natural chemistry between powerful duos. As we ride through the highs and lows of Jen and Judy’s odyssey, writer Feldman projects female friendship that goes beyond the typical media depiction i.e. often laced with spitefulness and rivalry. The characters grace each other with unbending trust and sisterhood that one experiences in a true friendship and shows how a friendship between women can be fulfilling, beautiful, and special.

1. The storyline in Dead to Me Season 2 throws a major curveball bringing back James Marsden, not as Steve but as Ben, the “semi-identical twin” making a surprise return. Dead to me, this season effortlessly torches the societal pressure and expectations on men, much effectively through the self-deprecating character like Ben. Ben sees his twin as a perfect and much-loved person, always favored by his mother, which he believes he will never be and the truth however being the fact that Steve is a downright cruel, manipulative, and abusive character.

2. Beefing up supporting characters like Michelle (Natalie Morales), and Ben (James Marsden), the Nosy neighbors (Suzy Nakauma), Detective Perez (Diana-Maria Riva ) with more screen time in Dead to Me Season 2 seems to have worked wondrously in complimenting the pace of Jen Harding and Judy Hale’s story.

3. Although brief, episode four of Season 2 ‘Between You and Me”, presents an honest and stimulating acknowledgment of two middle-aged white women privilege which was quite unusual but remarkable.

Liz Feldman’s ‘Dead to Me’ simply addresses the real, flawed, and imperfect women, tackling stereotypes at its best, with much left to be inferred upon. The thrilling plot, engraves characters that reflect some part within each of us, claiming spaces for the often ignored and despised insecurities. Dead to me nails the genre, proving humor and sarcasm is possible without being coated in misogyny and ridiculing or ‘punching down’. Amalgamating a line-up of some incredible characters with the intention to produce a unique genre makes ‘Dead to Me’ Season 2 boundlessly gripping with a lot to relish from. For anyone craving a female-centric show, there are many reasons why this seamlessly calibrated and fine-tuned series could be your next obsession.

Watch Dead to Me (Season 2) Trailer