In the Netflix original series, Feel Good (Season 1), Canadian-born stand-up comedian Mae Martin (co-written with Joe Hampson) takes an interesting look at addiction, sexuality, gender identity, and love pertaining to our age of anxiety. Though a work of fiction, Feel Good’s emotional core is based on real-life experiences of the show creator and star, Mae. Though more honest and genuinely written than a regular sitcom or rom-com, it definitely doesn’t achieve the balance between hilarity and poignancy as in Fleabag (2016-2019) or Please Like Me (2013-2016). Feel Good is a worthy watch indeed, with the six 25-minute episodes makes up for its flaws through the phenomenal central performance by Mae.

Pale face, lean physique, short platinum hair, Mae Martin’s fictionalized version of herself also does stand-up comedy act, turning her insecurities and vulnerabilities into jokes although self-deprecation doesn’t seem to release any tension. The series opens with a standard meet cute, where Mae hits it off with George (Charlotte Ritchie), a ‘proper’ British woman who hasn’t dated a woman before and who is bold enough to approach Mae, but remains so guarded about explaining her first queer relationship to her family and friends. But things are so smooth until that (and other) conflict arises. 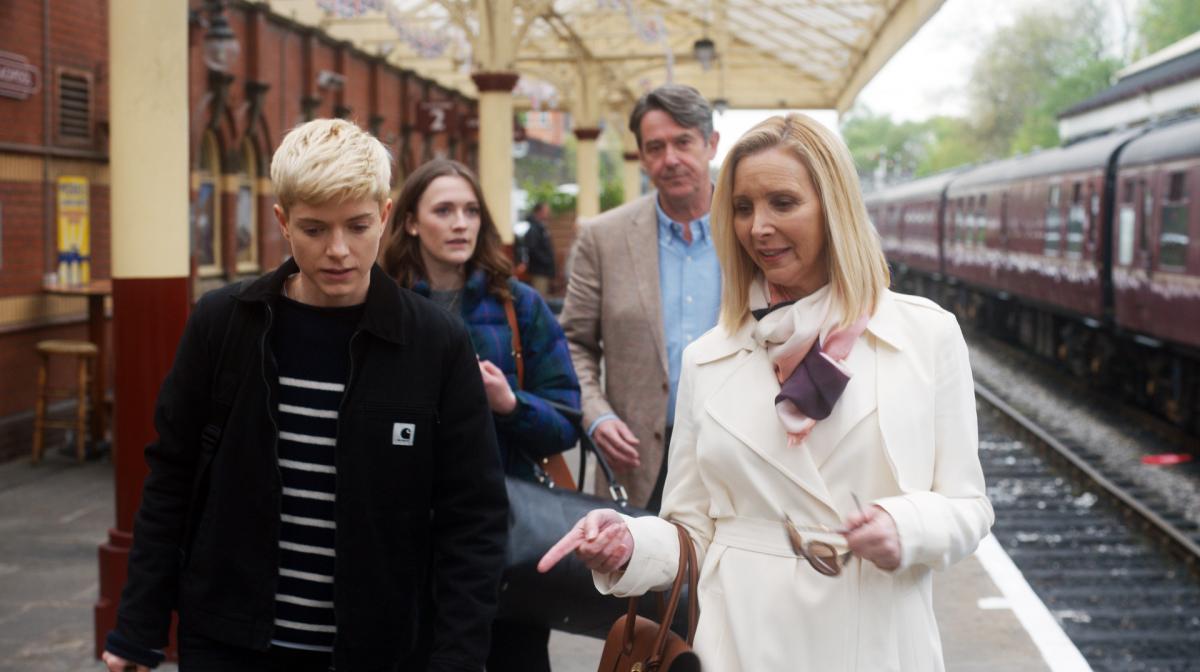 George seems to be the only person in the club to like Mae’s set. Initially, they are just bundle of nerves, having a drink. Mae’s question of “Do you like films?” is overlapped with George’s question: “Do you wanna kiss me, Mae?”  It doesn’t take long for them to fall so hard in love, eventually cohabitating (Mae moves from her friend’s couch to George’s flat). The innate need to constantly cuddle each other at one point makes George ask Mae, “Can you just lie on top of me and tell me something Canadian?” But of course, staying in love is an altogether different thing. The first time drowsy George says, “…stop touching my hand, please?” Mae looks little panicked, who then lies wide awake, hands hovering above her chest and fists tightly clenched.

There are no big, hidden truths here. However, conflicts arise when the same-sex couple gets to know each other a ‘little better’. While George is feeling bit edgy about the fluidity of her sexuality spectrum, Mae for years has struggled with maintaining relationship and with her gender identity. In a casual video-chat with Mae’s well-meaning yet exacting mother, Linda (a brilliant Lisa Kudrow), George learns that Mae is a recovering cocaine addict. Now in her early thirties, Mae though vows she has long kicked back her drug habit, her addictive tendencies have been transplanted to other areas. For instance, Mae becomes increasingly dependent on George, craving her attention constantly. When George goes on a trip home to attend a wedding for just more than a day, it takes a greater effort for Mae to suppress the need to text or call George.

George has to overcome obstacles too to come to terms with the new relationship. She remains reluctant to reveal to the friends, her partner’s identity, which results in a confusion and George’s broadly caricatured, snobbish friends (Ophelia Lovibond and Tom Durant Pritchard) believe she’s dating a man named ‘Jonathan Crenshaw’. The lie only becomes an ‘elephant-in-the-room’ kind of thing as George takes Mae for a party and introduces her as a ‘good friend’. Mae does go to Narcotics Anonymous meetings, where she comes across a relentlessly speaking elderly woman (Sophie Thompson) who also agrees to be Mae’s sponsor.

The meetings although doesn’t really help Mae, it does push her to meditate on the nature of addiction, which reflects the definition of Canadian author and renowned addiction expert: “addiction is something that you crave, find relief from and can’t give up, despite knowing the negative consequences.” That’s something very relatable which resonates with our Smartphone or relationship habits (things without which living through the present moment becomes a nightmare).  Moreover, Feel Good explores how relationships can’t always be a balanced equation, especially when one hemorrhages emotional pain and seeks reassurance.

Feel Good is enriching when it focuses on Mae’s agony and shame, and while touching on the same-sex relationship dynamics with a heady mix of cringe comedy and emotional truth. But it falters a bit when streamlining the high-drama. It’s too early (hoping there will be a season 2?) to write off certain subplots, although they don’t offer nothing but exterior charm. Nevertheless, if there’s one relationship dynamic that’s need to be explored more deeply, then it is Mae’s relationship with her mother. ‘Friends’ star Lisa Kudrow (who has received the top-billing) is the show’s scene-stealer. She plays Linda with a refreshing and hilarious sincerity that’s an utter delight to watch (that savage dialogue delivery in the ‘haunted house ride’ scene!).

Digging up on Mae Martin’s past (online), it is interesting to see how much of her darker past she has channeled into Feel Good. Mae has confessed that the show’s Mae is what she was at least a decade before. The nagging anxiety, the oscillation between emotional highs and lows, the naïve optimism, it has all been transferred into the script. Hence, Feel Good (Season 1) at times feels more therapeutic and less comedic, even though the (brazenly personal take) bestow us with what the title promises. Eventually, this is a perfect binge-worthy series that muses on those ‘normal’ pre-pandemic anxieties of the young middle-class; those who are now privileged enough to commit themselves to social-distancing but so distressed about the isolation.