F.W. Murnau’s The Last Laugh (Der letzte Mann, 1924) is widely known as the first film to employ dolly shots, and for taking the camera on flights of imagination in such a spectacular and unprecedented manner. While cameras have panned and tracked before The Last Laugh, never before the aesthetics were deliberately designed to emphasize on the character’s subjectivity. All the ground-breaking camera techniques conceived here were taken over by mainstream cinema and became the foundation for more innovation. Furthermore, this mature German Expressionist cinema made a daring move by dispensing with the dialogue intertitles. Though hailed as a significant silent film of the era, some of The Last Laugh’s elements haven’t fascinated modern viewers: especially, Emil Jannings’ dramatization of the central doorman character’s frustration and humiliation. Once regarded as a colossal performance, Jannings is now accused of hamming it up even for the silent-cinema standards.

Yet I have always felt that there are graceful notes in his performance despite the overly dramatized postures. People also express their distaste for a man who invests his whole identity in a uniform. And they find it troubling that the allegedly emasculated individual derives an overbearing sense of pride while totally ignoring his class position. Hence compared to The Last Laugh, Murnau’s proto-horror Nosferatu (1922) and his spellbinding American debut Sunrise: A Song of Two Humans (1927) possess the power to instantly enchant the contemporary audiences. 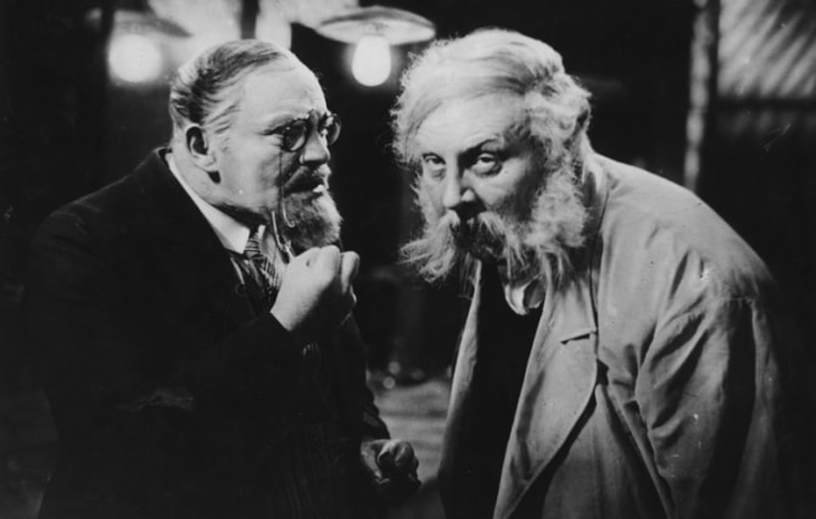 Yet it is important to understand Last Laugh’s dramatic (or melodramatic) elements and its emotional universe as much as heralding the movie’s innovative, dynamic cinematography. As German film critic Lotte H. Eisner wrote, “The Last Laugh can only be understood in a country where uniform is King, not to say God. A non-German mind will have difficulty in comprehending all its tragic implications” [1]. Roger Ebert in his adulatory review of the movie writes, “Perhaps the doorman’s total identification with his job, his position, his uniform, and his image helps foreshadow the rise of the Nazi Party; once he puts on his uniform, the doorman is no longer an individual but a slavishly loyal instrument of a larger organization. And when he takes the uniform off, he ceases to exist, even in his own eyes” [2].

Related to The Last Laugh: The Phantom Carriage [1921] Review – A Startlingly Inventive Morality Play of the Silent Film Era

Written by Carl Mayer who also co-wrote the seminal The Cabinet of Dr. Caligari (1920), The Last Laugh is seen as a contemplation of Weimar-era anxieties and the period’s fixation on authority. In the Criterion essay, the film is described as ‘a peculiarly German warning against the decline of benign authority’, and further stating that ‘Murnau located terror in the countryside for Nosferatu; with The Last Laugh, he places it in the city, its reflective surfaces generating a frenzied kaleidoscope’ [3]. Film scholars have also acknowledged Mayer for combining expressionism with the Kammerspielfilm – the cinematic portrait of lower-middle-class which supposedly influenced Italian neo-realism. The concept of Kammerspiel was first established in 1906 in the theatre world by the legendary stage director Max Reinhardt (who was also Murnau’s mentor).

The intention of the marriage between Kammespielfilm and Expressionism is to focus on the humanistic aspects of the narrative rather than obsessing over the twisted psychological states. In The Last Laugh, Carl Mayer and Murnau do distort the subjective reality for emotional effect. Yet they bring a humanist eye to observe the grim predicament of the elderly hotel doorman. The moving camera and minimized intertitles were already part of Kammerspiel film. In 1923, Mayer wrote ‘Sylvester’, in which the action progressed by visual means. Nevertheless, The Last Laugh is considered as the pinnacle of the experimentation that successfully combined expressionism and realism.

The Last Laugh opens at the opulent Hotel Atlantic, a paradise for the city’s wealthy population fitted with glazed revolving doors, elevators, banquets, and grand ballrooms. Standing at the entryway of this paradise is the hotel’s unnamed aging and burly doorman (Emil Jannings). Clad in antiquated, gold-buttoned uniform and sporting ridiculously long sideburns, the doorman’s stance is comparable to the vanity and exuberance of a military general. The daring mobile camera shots in the opening frames are simply exhilarating to watch, especially when the doorman moves between hotel and the curb, guiding the guests in and out of the cabs with skittering bellboys waiting for his command. The ‘Senses of Cinema’ article states, “The rhythm of the scene is set by the constant spinning of a glass revolving door that separates the chaos of the outside elements from the glittering and efficient atmosphere of the hotel lobby” [4].

A dent to the doorman’s sense of self-worth and identity occurs when he tires himself while trying to lift an enormous trunk from the top of a cab in the rainy night. The hotel manager witnesses the overbearing doorman’s fatigue. The elderly man lives nearby in a lower-class neighborhood, the dingy apartment balconies are full of middle-aged women beating dust out of the carpets. Keeping up with expressionist aesthetics, the city’s skyline was designed through matte paintings and other practical effects. The social boundaries are clearly delineated and starkly opposite. Nevertheless, the elderly doorman, despite the weariness, walks straight and proud once entering the neighborhood courtyard. Subsequently, the apartment-dwellers give him a cordial welcome as if he is a visiting dignitary. He derives great pleasure for being respected for his shiny uniform, and bestows them with a salute.

Soon, the doorman learns that he is demoted due to his old age and banished to the hotel’s basement lavatory. The biggest blow is that his self-worth and pride is stripped off alongside his uniform which is now replaced with a dirty, white coat. Murnau and his cinematographer Karl Freund poignantly observes the man’s humiliation, particularly in the moment he is forced to remove his uniform and when a button falls into the floor. As the old man staggers towards his neighborhood, he feels that his reality is collapsing. In one extraordinary shot, we see the old man imagining that the hotel building is falling upon him. Later in the night, he gets drunk at his daughter’s wedding and starts dreaming of exceptionally doing his job which includes balancing a huge trunk on one hand. 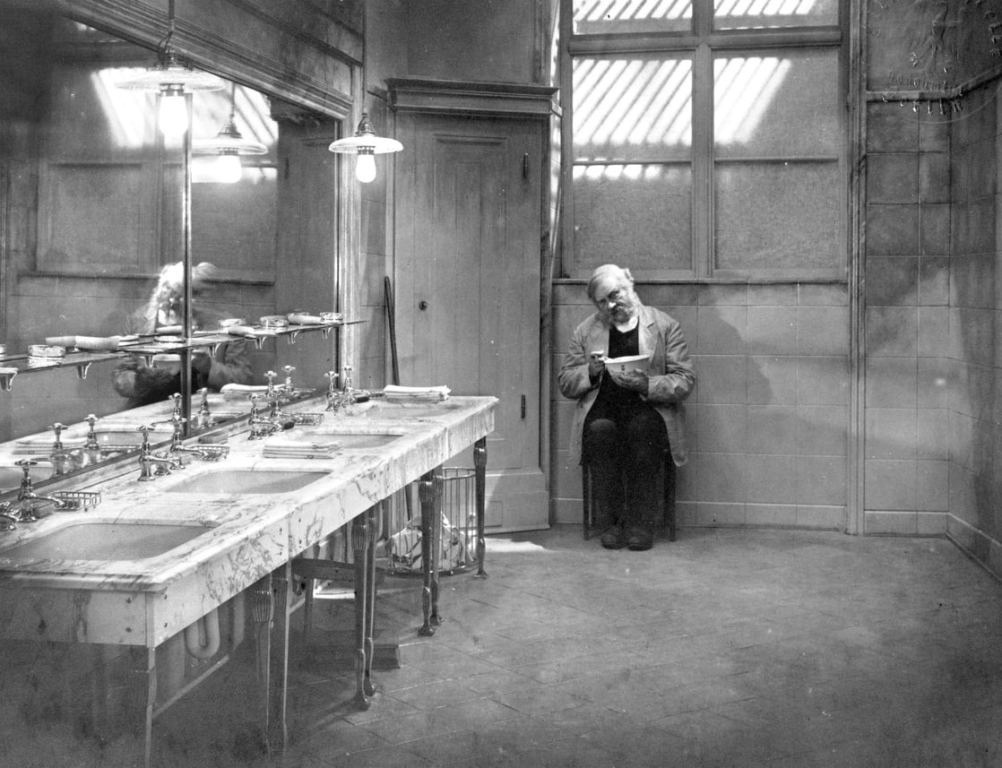 In the phenomenal dream sequence, Murnau and Freund fully exploit the possibilities of tracking shots, high-angle shots, panning, and superimpositions. The Expressionism witnessed here is more evolved and mature than the shadow-play of Cabinet of Dr. Caligari or Nosferatu. Another intriguing Expressionistic device is employed when the news of doorman’s demotion passes across the neighborhood. The cruelty of the gossiping women’s disregard is shown through enormous laughing mouths which instantly tears down the man’s inflated self-image. The play with the beams of the hotel night watchman’s torch is another memorable visual detail. In the scene, the doorman-turned-lavatory-attendant crawls on the ceramic floor, Murnau treats his subject as being unjustly ostracized to hell. The narrative ends with the haunting shot of the elderly man slumped over in the lavatory, resigned himself to his fate.

What follows is an intertitle, announcing: “Here the film was supposed to end. In real life the unhappy old man would hardly have something other than to expect death. But the screenwriter took pity on him and added a somewhat improbable epilogue.” In this epilogue, the old man is now a millionaire, by sheer coincidence. The happy ending was of course requested by production executives to boost the film’s economic potential (the film’s original title was also changed from ‘The Last Man’ to ‘The Last Laugh’ ). But the absurd scenario of the epilogue and the cynicism injected into it (by Murnau and Mayer) ably calls into question our own fixation with the happy ending.

The enduring classic status of The Last Laugh was made possible because of the involvement of highly qualified group of professionals: from director Murnau, scenarist Mayer, cinematographer Karl Freund, actor Emil Jannings to producer Erich Pommer, art directors Walter Rohrig, Robert Herlth, and production designer Edgar G. Ulmer. Like Murnau & Jannings, Freund and Ulmer immigrated to Hollywood in the dawn of sound cinema and were part of quite a few prestigious projects. Eventually, The Last Laugh (90 minutes) may tell a very simple story of a man’s disempowerment, but the distinct way the story is told, solely relying on the tools of the medium, elevates it to a greater art. Murnau’s emphatic triumph with Last Laugh influenced generations of film-makers, including the future ‘Master of Suspense’ who left his native Britain for Weimar Germany in 1924 and 1925 to just watch the Expressionist masters at work.

Dead to Me (Season 2) Netflix Review - An Ode to Women