With ‘Chintu Ka Birthday‘ directing duo Devanshu Kumar & Satyanshu Singh introduce us to a war-torn Baghdad. Thankfully, they don’t drone around the city to showcase the devastation of war (I’m sure the budget might not have allowed them to do so) or ploy the audience with body counts as they whiff for air to breathe on. This is a modest little film with an optimistic approach. The perils of war are of course spread all over the runtime, but the Tiwary family’s empathy and affection give this little film a beating heart.

Chintu (Vedant Chibber) has just turned six. He is a naive little kid who just wishes to have a ‘good birthday’ with a cake to serve as a cheery on top. As we come to know soon enough, his last birthday was a mess. However, his overly-optimistic yet sweet father Madan (Vinay Pathak) has promised him a birthday bash that ends on a happy note. To make things better, the Tiwary family has also invited their Iraqi landlord Khaled (Hassan Mahdi) to rejoice in the family’s happy moments. Things are going pretty well in spite of the bombing of Chintu’s school and the Bakery shop as Chintu’s elder sister Lakshmi (Bisha Chaturvedi) has devised alternative plans.

However, the minor conflicts are punctuated by a bigger ordeal when two US soldiers enter the picture and the Tiwari family’s home. A nearby bombing of a car had erupted chaos before the soldiers went on looking for possible suspects. Both the soldiers perch into the Tiwary family’s living room looking for possible out-of-place things. The tension starts escalating once they discover that the family has been hiding Khaled in one of their rooms. Chintu’s birthday and the possibility of cutting the cake soon become a thing of the past. Survival now becomes an inward experience, in addition, to being an outward one.

Produced by AIB under the First-Draft Production, Devanshu Kumar & Satyanshu Singh’s ‘Chintu Ka Birthday‘ is a modest film with small ambitions. Shot entirely inside the Tiwary household at a shoe-string budget, the film captures the tension of war, the reality of displacement, and the existence of hope in the darkest of times. Seen mostly through the eye of a little child, the film investigates how the futile nature of war exhibits a paranoia that can penetrate the thickest of skulls to believe that everything is wrong even when it isn’t. 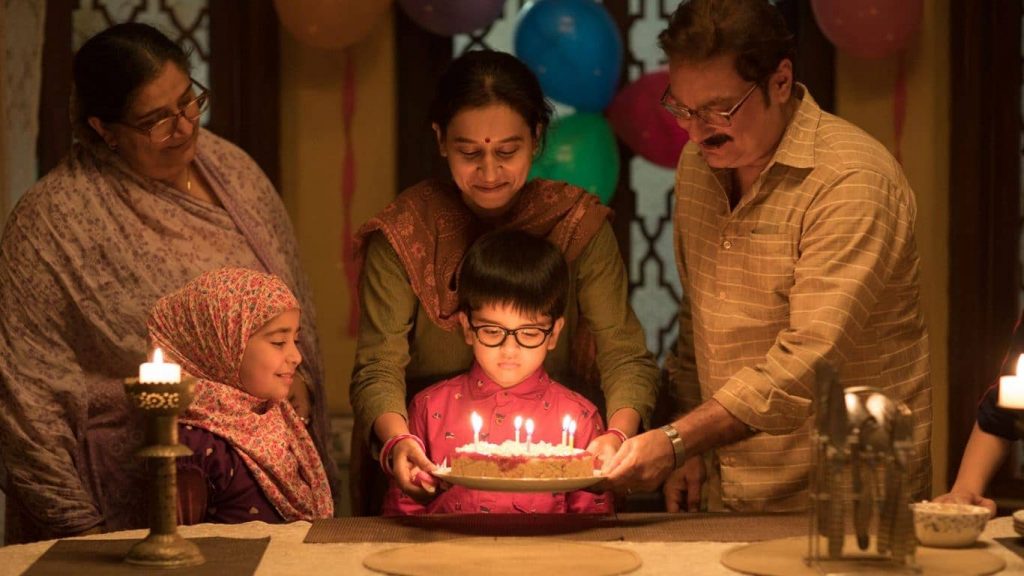 Empathy is the most important tool that the director duo uses to keep things in check. In spite of the small and bigger conflicts that arise in the narrative, they keep things engaged and going. The restricted premise doesn’t shorten the lifespan of this film because of the sheer affection Madan Tiwary as the leader of this Bihari household exhibits. Both, internal elements  – a negative thinking mother-in-law and external elements – the entry of the US soldiers might bring down anyone’s morale, but Madan remains optimistic throughout. This is a great metaphor that the film represents. That hope can bring about a change even when there is the minutest of possibilities of it happening in the first place.

The overall optimistic nature of the family is never showcased as a glossy do-over, though. There are some pretty serious places that the film goes to, in spite of its restricted premise but none of them are overbearing. Shot almost entirely inside a house, the film doesn’t necessarily pave way for some extreme camera-work. However, cinematographer Siddharth Diwan uses the right amount of still and handheld photography to grasp the stillness and urgency of the events that unfold in real-time. I’m not in favor of that color tone, though. It feels distraught and stamped-on. The sound design by Bishwadeep Chatterjee is intermittently great and odd. While it is one of the most essential elements to depict the situation the family is in – post-Saddam Hussain’s death, Chatterjee occasionally overdoses it.

Also, Read – The Edge of Democracy Netflix [2019]: A Captivating and Sobering Account of Breakdown of Democracy

As for the performance, Vinay Pathak as the endearing, optimistic, and affectionate father is superb. Pathak and the always dependable Tillotama Shome nail the Bihari accent to perfection, giving us a sigh of relief from the constant butchery by Bollywood. Bisha Chaturvedi as the elder sister Lakshmi is extremely impressive in her unassuming, mature yet essential presence. The US and Iraqi cast feels like a collection of caricatures but the well-written dialogues save the day.

Overall, ‘Chintu ka Birthday‘ is a sweet-natured anti-war film that doesn’t exactly achieve the kind of impact it is going for. However, its modesty and exuberance for the titular event to happen by any means makes for a satisfying 80-minute diversion.