Mythic Quest (Season 3) Episode 6: While the previous season ended with Ian’s exit from his dream project, Mythic Quest did not seem to have a future. Just as Ian’s character would think, I thought that Raven’s Banquet was nothing without him. However, this season brings many new friendships and relationships to the table to keep it as amusing as the previous seasons. While Rob and Charlie Day’s previous show (It’s Always Sunny in Philadelphia) shows insufferable adults doing moronic acts, Mythic Quest is warmhearted and is one of the smartest workplace comedies.

With Christmas just around the corner, this Apple TV+ series also brings a topical episode that is a charming ode to the festival.

Episode 6: The 12 Hours of Christmas

Directed by David Hornsby, the 6th episode titled ‘The 12 Hours of Christmas’ is written by Humphrey Ker. While the employees of Mythic Quest want to get away from their work during the Christmas season, they are required to be present in the office. Not just because of work but because of David’s (David Hornsby) insistence on celebrating Christmas according to how he thinks ideally it should be celebrated. The staff does not reciprocate his energy and enthusiasm, which upsets him. Unlike him, no one is in the Christmas spirit. They rather get excited by the mention of Chili, which David does not want to be a part of Christmas celebrations. 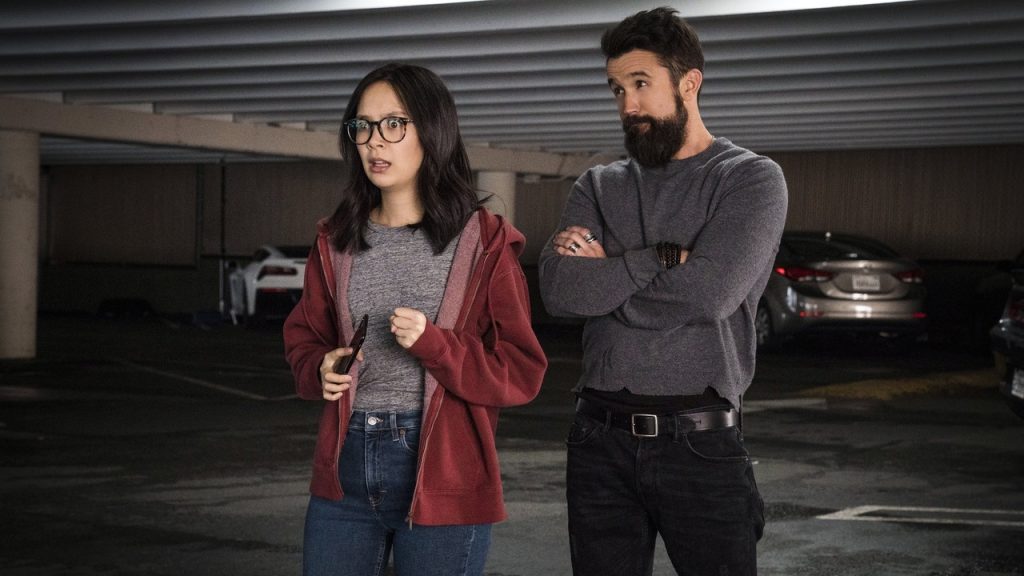 While he continues to make them excited with minor updates about the game, Ian (Rob McElhenney) robs his spotlight by merely being there. David gets angry since Ian is an ex-employee and does not let him address MQ employees. Ian justifies his presence by noting that Poppy (Charlotte Nicdao) is alone during Christmas, and he does not want to leave her alone. While speaking about distracting the employees from the fact that they are working during the holiday season, David goes on to mention how his plan of celebrating a ‘perfect Christmas’ would help. Ian strongly disagrees with it.

Meanwhile, Jo (Jessie Ennis) approaches Poppy and asks whether she is also spending Christmas alone. Poppy mentions that Ian does not have anyone to celebrate with and not to make him feel alone. Both partners use a mask of earnest intent to hide the fact that they do not have plans for Christmas. Jo then gives Poppy a Christmas gift, a necklace with a piece of the car she crashed, and spooks her out. But when asked for a return gift, Poppy mentions that she did not realize Jo considered her a friend. Jo, who has difficulty understanding social cues, blames her for being a bad friend.

Dana (Imani Hakim) pops by to celebrate the festival with Rachel (Ashly Burch), and while they are about to take a selfie, Brad (Danny Pudi) walks in and ruins it. He is over the moon by this festival that feeds into the cycle of capitalism by making people buy and consume more. Before leaving, Rachel asks Brad (who is now her assistant) to show the new development in the game. She wishes to make this feature unlimited and sell it at a lower price point, and Brad finds the idea socialist and unfit for Christmas.

Noticing the new power dynamic, Dana points out him being Rachel’s assistant, and he keeps finding a way out by being known that way. He even tries to showcase Star Wars villains as heroes during his argument. Then, Dana tells a story of her strategy to reclaim her position against Poppy – regarding the usage of Playpen. Hearing that, Rachel orders Brad to bring her a cup of coffee filled with specific instructions. Meanwhile, Ian and Poppy realize that the money they gave to David went in to buy a karaoke machine for one of the employees so that they can star in a Livestream of Mythic Quest website.

Both of them get angry since they thought the money would go to make the other person happy. Then they realize each other’s intentions and try to mask the fact that they are not alone on this day. Meanwhile, Rachel realizes that the new addition to the game made them earn over a half million dollars within two hours. While she jumps with joy with Dana, Jo comes in and gifts her a necklace as well. And just like Poppy, Rachel does not consider Jo being a friend, which enrages Jo, and she leaves the room.

Jo & David get all dressed up to make the employees get into the Christmas spirit. But he comes out of his cabin to find a completely empty office. He goes to Grimpop and finds all the employees enjoying music, dance & booze, along with Chili made for them. He gets angry since this does not fit how he wants to spend Christmas. But Ian and Poppy keep making their version of Christmas more and more exciting, which becomes irresistible for the employees. As a result, David gets pissed, stops the music, and makes them come back to the MQ office to work. Everyone heads back, feeling dismayed.

In the cafeteria, Brad and Jo meet and rekindle the memories of their evil past kinship with each other. Both are unhappy with the current state of their lives of being pushed around and ordered by others. That’s when Rachel walks by and rubs off the fact that her idea made them earn a million dollars. He pretends to repeat her proclamation, claiming he cannot hear it properly. She holds the mike and mentions it out loud, which is when all the employees hear back hear about it. They get pissed knowing that despite this, they would not get a bonus. Brad’s plan to shame her gets accomplished, and David gets enraged seeing the angry employees.

Ian and Poppy come by David’s office, trying to speak with him. But he does not want to have any interaction with them, so they just leave. Meanwhile, Rachel gets worried seeing the employees angry at her and asks Brad for some advice on how to make them feel happy again. He first makes her beg him for a piece of advice and notes that she should not worry about being likable all the time. Dana agrees with him and mentions that trying too hard to please people can seem off-putting. She agrees to do so the next day but asks for urgent help. Brad mentions an idea that is a mix of socialist and capitalist notions.

Back in the office, Jo wakes up David to bring him to an office filled with snow and gifts. Ian and Poppy mention that they made all the fancy arrangements with the help of their art department. Brad, Dana, and Rachel mention the employees getting Christmas bonuses, probably cutting from their own salaries. While everyone is happy, they are happy because of consumerism! Brad is certainly an evil genius.

Poppy and Rachel bring a gift for Jo, which uses her Playpen and shows her driving a tank and crushing women having brunches! Seeing them crack up the ideal game for her, Jo gets emotional and hugs them. She still does not understand how to make friends and plans to get together for a meal every week by herself. When they agree, she thinks of going on a tour every year, and they stop her train of thought.

Meanwhile, Ian and Poppy make David the center of attention in a Livestream while he sings a Christmas carol. As a result, David gets to celebrate his ideal version of Christmas – the one he could not get with his parents constantly fighting despite the festivity.