Blurr feels that Hindi cinema is still coddled into the idea of a sociopath-haunted thriller. Blurry with its wayward execution that didn’t know whether it wanted to break out of cliches or frantically drown neck-deep into it, the Zee5 remake of Julia’s Eyes does stumble into a spoonfed conclusion, but what was the point really? Another Taapsee Pannu-led thriller unsurprisingly, although not unreasonably, excited me as it did most of you. Halfway (or even earlier) into the movie, however, one can be expected to deduce that it is an experience led by its cinematography and not an actor.

Pannu certifiably is taken by, if not obsessed with, the works of Oriol Paulo effectively enough for her to work in yet another film by the Spanish screenwriter-director, and that too as the introductory feature for her infant production house Outsiders Films. But even an irrefutably seasoned actress such as her, despite her best efforts, couldn’t save the flailing dynamic of director Ajay Bahl’s tunnel vision. Yes, the irony isn’t lost on me. 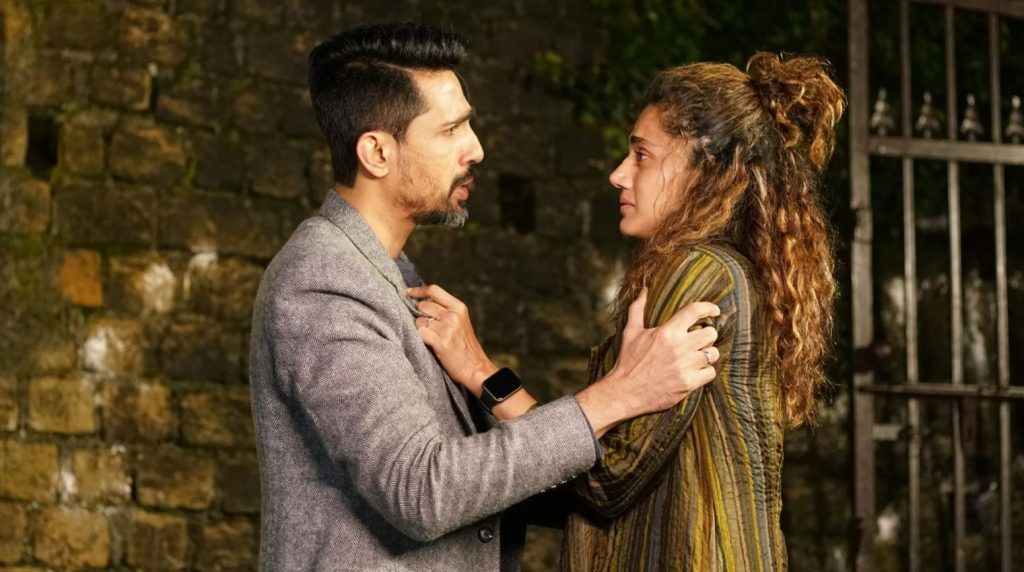 Bahl’s script follows Julia’s Eyes closely and, like it, lays the foundation for the inescapable claustrophobia that builds up with our lead, Gayatri, gradually losing her vision. What already is a suffocating nightmare of being followed by an invisible stalker who she feels has taken her twin sister’s life is heightened by her inability to see. Pannu communicates the airless urgency with every bit of distraught dedication. Too bad the story’s tailored, individualistic elements bear the stereotypical understanding of PTSD and its Freudian phenomenon in the style of any number of short stories you may find in the back of an angsty teenager’s notebook.

Yanked into the confusion that surrounds her blind sister Gautami’s apparent suicide, Gayatri (Taapsee Pannu) finds more questions than answers in the enigmatic hill station. Her husband Neel (Gulshan Devaiah) and the investigating officer try in vain to convince Gayatri that her twin sister’s death wasn’t a murder. But it isn’t just the circumstances of the death that is confusing for Gayatri, and she also feels a constant presence of a fleeting existence around her. Her increasingly worsening eyesight pertaining to a progressively deteriorating eye condition only adds to the already existing pile of anxiety and grief.

A conversation with Gautami’s neighbor and once friend, Mrs. Solanki (Kruttika Desai), drives the frantic girl to Bhowali Wellness Centre. There she lands into a revelatory, albeit insulting, conversation amongst a group of blind women, and she learns that Gautami had a boyfriend. Her eavesdropping also allows her to know that Gautami has taken a romantic vacation with her partner. Knowing that she’s being followed and seeing the outline of her pursuer this time, Gayatri runs after him. After losing him in the maze-y chase, she faints and is brought home by a well-meaning neighbor.

Bidding goodbye to her sister’s body, Gayatri decides to follow up on who Gautami was seeing and manipulates Neel into going to the same place where her sister had gone. No one at the lodge remembers who Gautami was with on her visit, but the caretaker does mention a person in his acutely cryptic words, which give out nothing useful. She does find a strange key that Gautami had left behind.

Learning that a local restaurant manager had seen Gautami with bandages on her eyes urges Gayatri to ask the real questions. Neel convinces her that she indeed had gotten an unsuccessful operation, and he only kept it from Gayatri so as not to make her anxious over the fact that she might lose her eyesight too someday. When Neel goes missing on his way to retrieve the CCTV footage that could’ve shed some light on who accompanied Gautami, distraught Gayatri calls the cops. To make matters far more inconvenient for her, the mysterious assailant electrocutes the only lodge worker who remembers seeing him.

Complete loss of vision comes into Gayatri’s life with another traumatizing event. Neel has taken his own life. In the hospital bed, post an eye operation, Gayatri hears Neel’s “suicide note,” which is an exhaustive confession revealing the secret affair he had with Gautami. In grief’s embrace, Gayatri implores the doctor to hold on to Neel’s corpse so that she can see him one last time after her recovery. Shutting down the doctor’s insistent advice of staying at the hospital for recovery, Gayatri decides to take her chances at being self-reliant with no vision. With the town in a dangerous landslide, Gayatri waits with bandages on her eyes for the arrival of her nurse.

Uncomfortable at first when she finds out that the hospital has sent a male nurse, Deepak (Abhilash Thapliyal); Gayatri soon makes peace with him and begins exploring the house without vision but with his help. He wasn’t kidding when he said that he would be at her constant beck-and-call. One tap on the speed dial when Gayatri freaks out at the thought of an intruder brings Deepak to her place to calm her and be there for her. His constant help and lenient care draw the emotionally and physically vulnerable Gayatri to him. But when her kiss is rejected by Deepak, she feels a sinking sense of guilt that pushes her down the pit of loneliness yet again.

On a stormy night, she feels the presence of someone in her house and is compelled to run out. Being taken to the home of Ira by her father, Gautami discovers the mysterious key and is certain that Ira’s father has something to do with Gautami’s death. She is soon rescued by Deepak, who then brings her to his house, where she is again met with Ira. She gives Gautami the key and urges her to find out if it opens a door in Deepak’s house. In Ira’s words, the nurse is the monster who killed Gautami and is drugging Gayatri into having nightmares.

Who killed Gautami and why?

Fumbling through the strange house, Gayatri stumbles into a door that is opened by the strange key. She removes the bandages from her eyes, and her pupils slowly focus on the haunting pictures on the wall of the red room. Scared out of her wits after seeing the pictures of Gautami and Neel on the wall, Gayatri runs out, and before she can get away, she slips on the blood that has been dragged back to Ira’s corpse on the wall. Deepak walks back into the room and comes close to Gayatri after removing the knife from Ira’s mouth. Knowing that the only way he perhaps wouldn’t hurt her is if she’s still blind, Gayatri pretends that the operation didn’t work.

The killer, however, soon figures out that she is faking her blindness and drags her to the box where he’s been hoarding the decomposing body of the real Deepak. He injects Gautami’s eyes with something that will make her go blind again and locks her in the box with Deepak’s corpse. Just as she breaks out of the box, he comes back with wrath and chases her out.

Gayatri takes shelter in the house of Mrs. Solanki and soon learns that the murderer is her own son. A fine payback for his mother’s help, he kills Mrs. Solanki and goes after Gayatri again. Having her back to the wall, Gayatri has no choice but to listen to him talk about his distorted idea of love and companionship. Wearing the noose on her neck and finally realizing how Gautami died, Gayatri decides not to give in to his insanity. While distracting him with a kiss, she stabs him in his side and locks him in his room.

After calling the cops, Gayatri turns out the lights in the house to make his mobility as difficult as it is for her with her fast-fading vision. Another cat-and-mouse chase exhausts her and her perpetrator, and before he can overpower her, the cops show up. Knowing there’s no way out, he quite dramatically slits his own throat and ends his life. Soon after another operation reinstitutes her vision, Gautami goes to say goodbye to Neel in the morgue. As she stares into his cloudy white eyes, the doctor lets her know that he had donated his eyes and she has rightfully received those.

Although the murderer’s psychotic tendencies can hardly be placed on the backs of his troubled relationship with his mother and how he had felt invisible in the world, that is exactly how his monstrous origin story has been laid out over the course of his big reveal. Mrs. Solanki has always placed the blame for her lost career on her son’s sickness, whom she needed to tend to. Even with the unconscious Gayatri on the floor, she wouldn’t shut up about how much she has sacrificed for him and how he has ruined his life. Clearly enabled by the equally sociopathic mother who would hide his crimes, he didn’t get the help he needed. That, combined with the coldness and unacceptance he has felt from everyone around him, made him believe that he’ll only be noticed when someone is at his mercy. Being needed by blind women was mistaken as a disoriented sense of love.

Sure there’s an audience for Blurr. And sure, it could make for a tolerable–and I could go as far as to say decent watch–if you turned off the thinker and let yourself go down the spiral of the suffocating plight the protagonist went through. The predicament is well established with the fear of an exceedingly lonely disability chasing the lead while her bogeyman runs on the same track of involuntary seclusion but with a sinister motive. Even a shorter run time would’ve brushed off the tiring appendages that weigh down a fairly decent story of terror. I mean, did it really need such a despicably shabby nightmare sequence?

Taapsee Pannu gives Gayatri her all through every bit of ongoing horror looming over her already distraught existence. It could’ve easily been a melodramatic approach taken by a lesser actress, but Pannu finds the right footing by downplaying the physical expression of fright and allowing the atmospheric tension to do its job. There are moments of stress-induced worsening of her tunnel vision where the actress brilliantly conveys the exact panic you would expect from a person in her position.

The script does Gulshan Devaiah pretty darn bad an injustice. It doesn’t sit right that an actor like him would be wasted on a character whose purposes are to distract from the obvious stream of the mystery, be an obstacle in the protagonist’s path and be the sacrificial goat for the sake of the happy ending. Stomach-churning dialogues of romance between Neel and Gayatri appear out of nowhere and hover in the center of the advancing tension, only to leave the bitter taste of exceptionally poor writing. Every other character receives equally unfair treatment by the script that was too busy overstuffing itself with ceaseless tropes of setting the antagonist as an enigma.

Sudhir Chowdhary conjures up a haunting atmosphere where the blues and the greys of the rainy hills evoke a more impending sense of danger than the murderer himself. Every shot within Gautami’s perilous home aids the omnipresent fear. However, the atmospheric danger set profoundly by Chowdhary’s vision could use a better score to reach its full potential. But there really isn’t a point scrutinizing all that could’ve gone differently when a 2022 script still tries to establish mommy issues as a reliable reason for a man to go that berserk.