The Undeclared War (Season 1), Recap & Ending Explanation: British cyber-thriller television series The Undeclared War is set to start streaming on Peacock on Thursday, August 18. Originally streamed on British television network Channel 4, Peter Kominsky created it. It tells the story of a group of heroes who get the responsibility to handle pre-planned cyber warfare between Britain and Russia before it gets worse. Set in the near future, the series is a decent thriller with engaging twists and turns but lacks the emotional connect for some poor performances on the projection.

The series tells the story of a young GCHQ intern, Saara, whose first day at the office coincides with a major cyberattack in the United Kingdom. After entering the scene, Sara faces casual sexist and racist (she is a girl of South Asian descent) comments as well as negligence towards her from her superiors. Due to that, she analyzes the malware code without permission from her superiors and finds out a greater threat missed by others. Meanwhile, the cabinet members considered this an intelligence failure and rebuked Danny Patrick, Head of Operations GCHQ, and David Neal, Danny’s boss at the GCHQ, and ordered to re-analyze the code to find any further harmful malware. 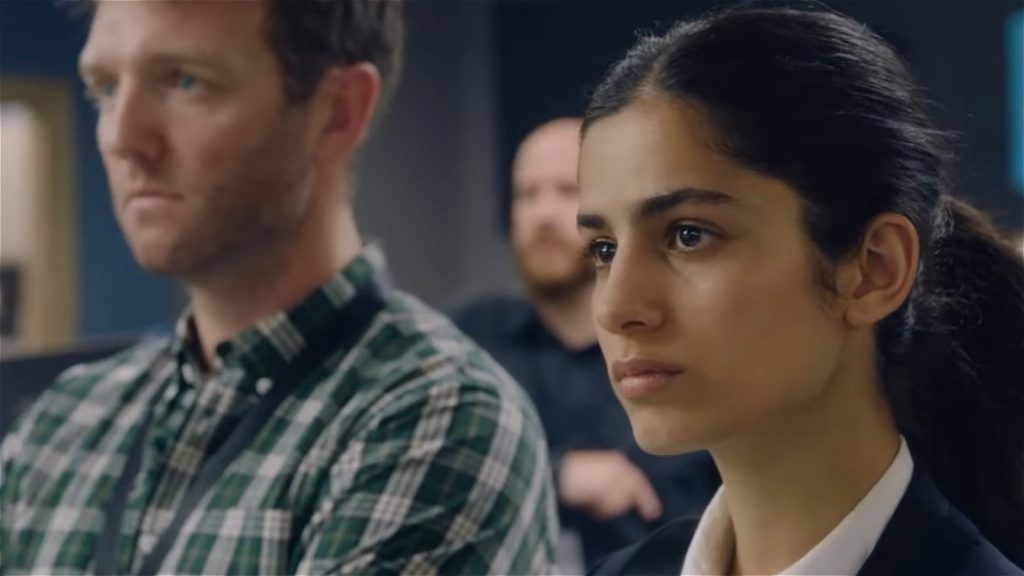 During this time, Saara has been going through emotional turmoil as her father just died, and she blames herself for not being by his side at the time of his death. Also, she is dealing with her sexuality and facing a degree of estrangement with her live-in boyfriend, James. At work, she finds some encrypted text within the malware’s code. Despite her superiors’ orders, she gets the text decrypted by one of her friend mathematicians at the GCHQ, Gabriel, and finds a hidden message to meet at a particular place. Saara brings this to Danny and Kathy, and Danny orders them to go there for further investigation.

The third episode takes a turn away from our main protagonists and shifts the focus on a young Russian hacker, Vadim Trusov. It showcases that he was in the same class as Saara in the university. He is the child of a Russian arms dealer, so he resents their family and tries to get away from them. So, to become independent, he gets a job at Glavset, Russia’s Twitter propaganda against the UK. There he meets with Marina, a single mother who works as a journalist for a website critical of Putin’s policies. They fell in love eventually.

Meanwhile, Vadim gets kidnapped, and his father asks for favors from the FSB chief. The FSB gets Vadim out, but they ask him to repay their favor by joining FSB as a hacker. Reluctantly, Vadim joins FSB and learns that they are planning a cyber attack on Britain. Through the hacked GCHQ CCTV cameras, he finds out Saara is working for GCHQ and tries to warn her by encrypting a text (the one I mentioned earlier).

When Saara meets Vadim, he tells her that the malware is still at work and something is still hidden within it. Saara tells this to Danny, who gives a little weightage as he thinks it may be a trick from the Russians. But still, Saara looks for something but doesn’t find anything concrete. She shares her concerns with John Yeabsley, a worker at the GCHQ. He advises her to take some help if she cannot find the hidden malware.

Meanwhile, Marina and Vadim drift as Marina accepts a correspondent position in the Russian Global News. While in Britain, intelligence finds out about the hacker’s team (Vadim is on that team) who created the malware and released them to the press. When Marina comes to Vadim for an interview about this matter, Vadim tells her that this is all part of a big plan and they are just pawns in the game. All this (Marina’s job, Vadim’s kidnap, and leaks of the photograph of the hacker’s team) is part of their big plan.

On the election day, the exit polls are rigged, and the ethnic voters are deprived of giving their vote. Demanding their voting rights, the ethnic voters come down the streets. This created chaos, and as a result, the United Kingdom’s Prime Minister announced a state of emergency. Kathy Freeman, Saara’s colleague, and an NSA-appointed analyst, finds out that while everyone is focusing on the election, a high amount of NSA confidential data has been leaked. Soon, it is revealed that Yeabsley is the leaker as he is seen appearing on a news channel in Moscow. As a current employee of the GCHQ, this is an act of treason, and the Prime Minister resents Danny and David for their lack of knowledge about this matter.

Saara becomes devasted by this news but soon finds out that this all is made up by the FSB. Yearsley was already dead when the interview on Russian television aired. Grief-stricken; she remembers Yeabsley’s advice to get help to look out the malware for further hidden dangers. So, she asks for help from Gabriel. They eventually discover the malware and stop it temporarily before they (FSB) learn about it and go to their next stage. For this, they (Saara and Gabriel) find out that they lose an enormous amount of data automatically. After a few unsuccessful attempts, Gabriel eventually stops this transmission.

Meanwhile, the cabinet convinces the Prime Minister to retaliate against the Russians despite Danny and David’s reluctance. They retaliate by cyber attacking a couple of Russian arms factories. But the Russians exaggerated the cyber attack’s effect and threatened to retaliate on a big scale. Soon, the British military comms are down, and their nuclear submarine systems are hacked. Understanding the effect of all this, Vadim messages Saara a link. Saara opens the link and finds out that the FSB has all the information about them from the beginning. They hacked all of their computers and all the security cameras. They are surveilling them from the exact beginning. Saara brings Danny to this, and Vadim explains the whole thing via video chat. He also shares a clip where a Russian FSB agent is briefing the entire plan. Vadim’s transmission is cut off in the final scene, indicating he is captured.

The Undeclared War (Season 1) Ending Explained: Will there be a war?

The first season of The Undeclared War ends on an ambiguous note, with Vadim sharing an enormous amount of data the FSB has been hacked from the British intelligence server with the GCHQ itself. While doing so, he maybe gets captured as we see the video transmission gets cut off. So, in this situation, what audience would expect from the next season of the series?

There can be two possibilities for here we can expect in the following season of the series. In the first scenario, it probably gets stopped. The British intelligence gets the evidence of incitement and provocation of war. Britain can get them into the international community and can prove Russia’s hypocrisy on this matter. And, if Russia continues the aggression against Britain, there will be a chance of a full-blown War, which either party will not expect to go into right now. So, season 2 can focus on how Saara and other members of the British intelligence prevent the war.

On the other possibility, war will happen between Britain and Russia. Despite having all the evidence, maybe our protagonists don’t be able to stop the war itself. As Yeabsley told Saara this season, the Russians are very smart, and they go through every possibility of the enemy’s actions; perhaps they predict Vadim’s betrayal before his action. They prepare themselves to adjust to that situation. So, there is a possibility that the second season will be about the war itself.

The first season may have flaws, but at what point does it create hype for the second season? So either way, the second season is worth waiting for, and perhaps we can expect the makers to improve their flaws and the next season to be bigger and better.

Where to watch The Undeclared War (Season 1)