Malayankunju [2022] Movie Explained: The official poster of Malayankunju – a side shot of a man unpacking a box – gives us not much to expect or know about the film. Except for the man himself. Fahadh Faasil- is inarguably one of the finest actors working in the country right now who has consistently and thoughtfully given us some excellent films in the past couple of years. Then there are other names on it- A.R. Rahman and Mahesh Narayanan. Rahman needs no introduction, and for the unversed, Narayanan is the man behind Take Off (2017), C U Soon (2020), and Malik (2021). In Malayankunju, Narayanan is given the credits for writing and cinematography. Helmed by debutant director Sajimon, Malayankunju effectively spins a survival thriller out of a real-life story. If you haven’t seen the film yet, do not read ahead. The request is to watch the riveting, fearless cinema first and then return to this piece so that the experience loses none of its impacts. Happy reading!

Malayankunju follows the daily life of Anilkuttan (Faasil), who runs his electronics repair shop at his place. He lives with his mother in Iddukki, a small settlement in the hills of Kerala. The place is surrounded by forests and is often prey to heavy rainfall, owing to which the Government advises several inhabitants to relocate for safety. Anilchettu is self-centered and reserved and likes to be left alone. When his mother Shantamma (Jaya S Kurup) gives a room from the house for rent, a family shifts there shortly. They have a small child named Ponni who constantly cries, leaving Anilkuttan aghast and irritable. The first half of the film builds this world with care and attention. We trace these characters, but not enough is given away as well. Malayankunju effectively creates a world inhabited by flawed individuals, where we witness Anilkuttan’s deep-rooted casteism. He cannot stand the new neighbors because they belong to a lower caste. Even the dog keeps barking all through the night when he works, his window adjacent to their room. One night when the crying gets to his nerves, he plays devotional songs at full volume.

Anilkuttan’s world turns upside down, quite literally. Due to heavy rain, his house breaks in the landslide. It’s a terrifying sequence, stretched on screen for a good twenty minutes and more when we follow Anilkuttan as he scrambles for some sort of help and cries in despair. Filmed in a tight closeup, in a setting that closely resembles that of the interiors of a landslide, Malayankunju builds claustrophobia, fear, and denial with exceptional technical expertise. Malayankunju gives Anilkuttan one last chance to get his life back- where he meets his father in a daze. We learn that his father committed suicide some years ago because his sister had eloped with a boy from a lower caste on the day of her marriage. Inside, Anilkuttan is guided by that one sound- that of the baby crying, which ultimately saves his life. He also sees the father of the child, now dead in the debris. After a lot of searching where he is guided by the cries of the child (which was once disturbing to him), he finds the child stuck inside the landslide and saves her. Later he finds out his mother has died in the landslide. He does not wish to see his mother’s body in the hospital. Malayankunju ends with Anilkuttan touching the child in the ICU and smiling.

Malayankunju is a survival drama that also works as a dense and layered character study at its core. The narrative can be neatly divided into three distinct parts- before, during, and after the landslide. We see Anilkuttan as an unlikeable lead whose actions reveal a deep-rooted casteism ingrained into his mindset. Malayankunju packs layers of meaning in the smallest of details, where the recurrence of certain minor daily occurrences adds to the suspense as well as thematic tropes of the narrative. 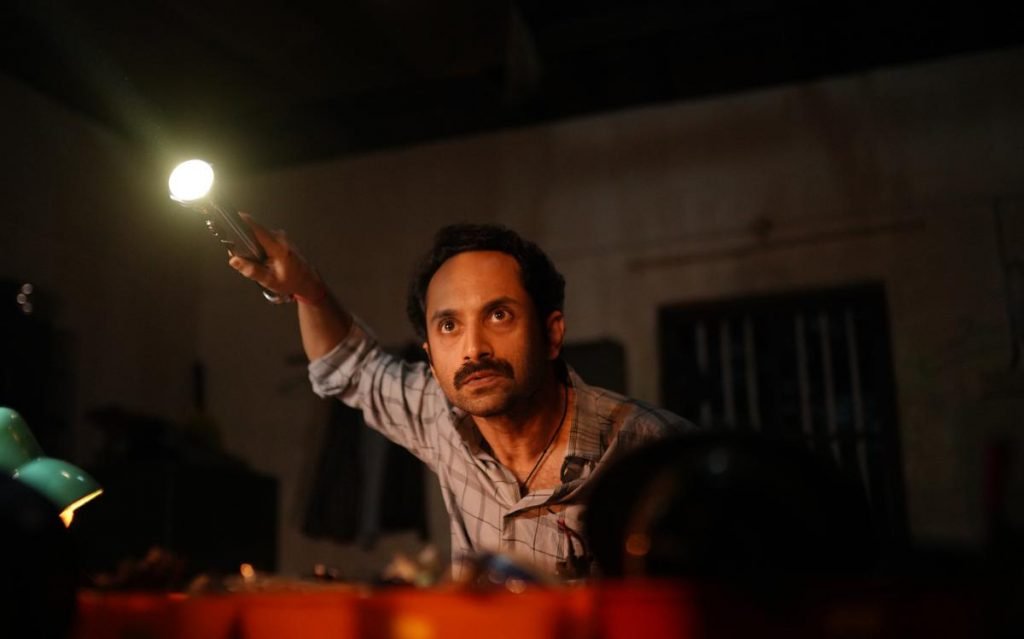 At its core, Malayankunju is essentially about rebirth and redemption. Anilkuttan has suffered a great personal tragedy from his father’s untimely death and his sister’s elopement. Because of this incident, he turns into an unsocial person who dislikes talking or listening to anything. In a drunken fit of rage, he uses a casteist slur for which he is almost arrested. The aftershock of that incident has left such effects on his mindset that he finds it hard to accept people from a lower caste.

When he is trapped inside the landslide, crying and shouting for help, Anilkuttan has a dream where he meets his father. His father gives him a moral boost, propelling him to try harder to get out of the trap. It’s almost as if he is searching for light in mother nature’s womb. It’s a breathtaking sequence that does not give the viewer any easy escape. As Anilkuttan finally gets a new lease on life, he redeems himself from his past deeds. He lets go of regressive mindsets as he genuinely sees how there is no division between people based on caste, color, or sex. This is not spoken in direct terms in the dialogues or writing but implied in how he goes to see the child in the ICU. He bends and plays with the child, and we see him genuinely happy for the first time.

Malayankunju also bends a great deal towards the concept of forgiveness. It is not just about how Anilkuttan is forgiven for his toxicity by the people around him but also how he can forgive himself in the end. Faasil plays Anilkuttan with restraint, where we see behind all the ferocious and irritable nature of a lonely soul trapped within untreated trauma. Keeping all this in mind, we also see that the people around him tend to forgive Anilkuttan easily. Either they take him too seriously or are eager to sidestep his actions. Still, whether Malayankunju gives Anilkuttan an easy route to forgiveness is meant for another debate altogether.

An important theme in Malayankunju is climate change. Malayankunju effectively draws out its setting where the village’s inhabitants are dependent on nature. In one of the early scenes, we see the plight of workers who have to carry out rubber extractions. The locals also kill some wild animals in the forest that Anilkuttan witnessed as a child. Then, there is the massive landslide that destroys Anilkuttan’s world altogether. It is as if Mother nature’s fury comes in needs to confront the constant abuse of power in place.

Sajimon’s Malayankunju ends on a positive note of reconciliation and acceptance. We see a weak Anilkuttan in the hospital, his neck and forehead bandaged. He strolls towards the children’s ward, towards the ICU. There, he is allowed to enter to see the child he saved. He takes out the toy he had found under the debris while struggling to find her and smiles at the child. His ill temper is now replaced with peace and acceptance.