The Mysterious Benedict Society (Season 2) Episode 4: Episode 3 saw Number Two escape. Constance, Reynie, George, and Kate fled in the nick of time, and Mr. Benedict seemed to be taken in by Curtain’s scheme of artificial happiness. With their leader under the psychological spell, things looked bleak for The Mysterious Benedict Society. The fourth episode, ‘Free of Pointless Command’, does little to push the story ahead, and the episode may come off as rather unimportant.

‘Free of Pointless Command’ begins with the four “smelly” children in the taxi. When Reynie disputes the man’s claim, he gets a reply informing him of his bad accent. Constance agrees and urges him to listen to the taxi driver.

The episode leans towards the car driver, being a member of Dr. Curtain’s outfit with a few dialogues, but that’s about it as he drives them safely to the train station. Taking advantage of ferrying four minors, the driver fleeces them with a bogus meter. As the children fall 834 escudos short of his fare, he threatens to summon the cops. However, all parties involved (before the cop shows up) reach a decision to engage in a barter deal. The driver turns down whatever Kate offers from her bucket, instead demanding the entire bucket itself. Weatherall refuses to part ways with the bucket, but Constance saves the day as she hands the driver her pendant. She explains her actions later, by saying she didn’t want to pick up the pieces of Kate as that would be her state without her bucket. Within the railway station, the youngest member of the group senses that Mr. Benedict is in trouble and they need to hasten to his rescue.

The four children open the locker at the train station and receive a clue. It is here that Constance realizes that the eye containing the clue is on the pendant she handed to the can driver. Kate comes to the rescue and takes Reynie along with her to get it back. They find the driver and he tries to call the cops on them. It was a play on greed where, instead of letting it go and keeping the “worthless” necklace, he opted for another item for his fare. As the deal was already done, any deal had to be an exchange with greed again coming to the fore. Kate handed the driver a seemingly worthless item, something she didn’t actually wish to hand over to the guy, but made him desire it. Back at the station, Reynie and George figured out the clue just in the nick of time as ‘The Grays’ converged on them. Using their train tickets, the four climbed aboard the locomotive and sped off. ‘The Grays’ didn’t pursue them, but the water Polo team returned and boarded the train.

We get to see that Number Two actually broke out and reached a village. When she tried to inform a few gendarmes about the situation, they refused to believe her claims and spoke about Dr. Curtain being the man who saved the world. They even urged her to try Curtain’s happiness sessions, and she agreed.

Benedict visited his twin in his office and spoke about the delightful changes he was experiencing. The man believes that anything seems possible and his newfound nature confused Number Two in their final scene as well. When the light dawns on her, she begins to question her superior’s ability to stop his brother. However, he assures her (very happily) that the best thing they can do is stay there. 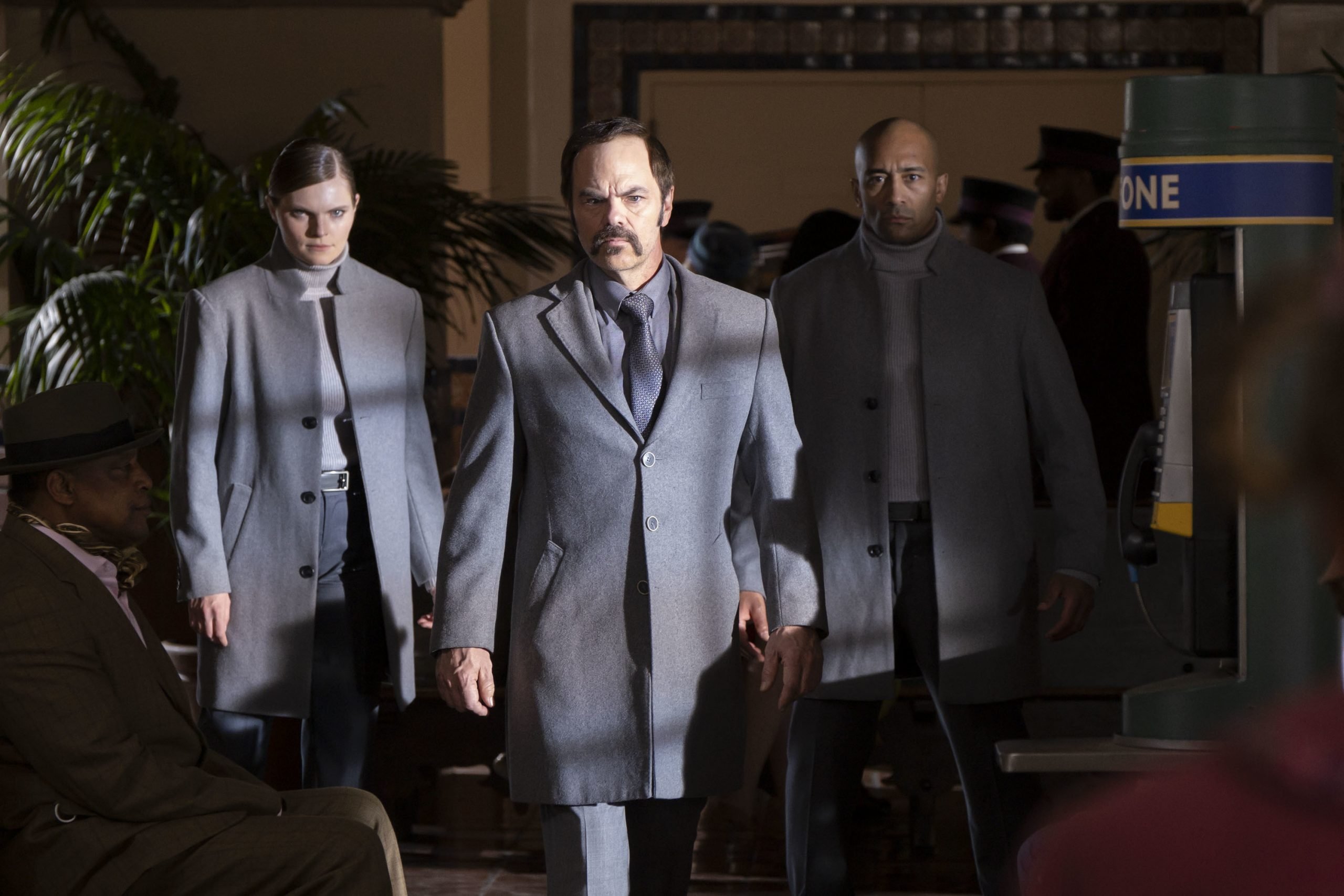 Jackson and Jillson bring a park member to Sebastian and Paula who have frozen. He attributes it to deep meditative work and urges them to be the ones to inform Dr. Curtain, but neither of them seems to want to be the one. Later, when a doctor says he hasn’t seen anything like this before, a helper wheels in a third case to show us that happiness technology is problematic.

The blimp to Europe lands in the middle of nowhere with half the luggage dropped off midway. Rhonda convinces Milligan to leave Miss Perumal, as they would keep the educator safe. However, Perumal stole a scooter with a sidecar and impressed the duo with her navigational skills and ability to think on her feet. En route to the train station, they run out of fuel. Milligan siphons out a boot full of gas from a car and the trio reaches the station. It remains unclear if they entered or not.

En route to Burgrub, the quartet decides that they will not jump off the train, but remain awake all night in turns to remain safe. Should the water polo players touch them, they would blow a whistle and alert all the passengers on the train.

Constance stays up and notices that George hasn’t slept, nor is prepared for his watch. He ultimately dozes off, only to awaken hours later and find that Constance is missing.

Number Two looked confused and worried at Benedict’s new persona and opted to stay silent and her colleague’s newfound happiness. It’s safe to say that she understands she is on her own and will break out in the dessert truck; just as she did in the previous episode.

Did Miss Perumal, Milligan, and Rhonda board the train?

It doesn’t seem likely as they had barely gotten off at the station and wouldn’t have known which train. Also, had they boarded, they would have met the children much before nightfall. An argument that they are staying hidden can be thwarted and believed. The former, as the children, didn’t spot the adults in the queue to climb aboard. The latter, well, if they are hidden, they clearly have bigger plans in mind. However, the adventure will remain entertaining only if the kids battle the water polo team and ‘The Grays’ by themselves.

Where has Constance disappeared?

Constance’s absence from the carriage ends the episode on a cliffhanger. A reasonable expectation could be that the water polo players have taken her. However, that will not hold as there is no way someone as vigilant as her would allow herself to be taken without a fight. Did the other three children sleep through it? It may be, but it’s not what happened. Constance may have gone for a walk, and will nonchalantly rubbish George, Kate, and Reynie’s frantic search for her. Constance had said that they should have planted more fruit on the water polo players (just as they did on the ship) and may have gone to carry out her plan of attack.

Where do you think Constance Contraire is?

Where to watch The Mysterious Benedict Society