While a majority of the world calls the game Football, the Americans refer to it as Soccer. For them, Football (the one that they call American Football) is a game, more like Rugby, where major injuries occur to the players. In general, the game is considered just a sport that involves kicking a ball with your foot. ‘The Soccer Football Movie’ plays around with these differing definitions of this sport right from its title and presents a sports narrative.

Directed by Mitch Schauer, The Soccer Football Movie is written by Deeki Deke. The film begins with exciting footage during a football match where Zlatan Ibrahimovic scores a goal, just as expected from him. The crowd cheers for him with enthusiasm and the commentator Rob Stone joins them in their support for this brilliant player. Not just is Zlatan loved but also considered a frontrunner for the award – All-Star Cup All-Star of All-Stars of All Time, at the end of the tournament. While he jumps around with joy and energy, ‘Weird Al’ Yankovic (who happens to be at the stadium for some reason) tells Rob that he is also hoping to win this prestigious cup.

After interviewing these two celebrities, Rob sees a tall man with a child’s face and asks for his opinion. The man walks in the other direction, and we see the kids standing on one other’s shoulders to look like an adult. Two boys and two girls (Nautai & Zana) fall and start walking toward the players’ lounge. Inside, they find Zlatan and cannot believe that they are seeing him in person. Zana impresses him with her goalkeeping skills, whereas Nautai impresses him with her juggling expertise. Afterward, they introduce themselves as Creature Catchers – a group that specializes in pest control services.

The group of 4 wanted tickets to watch football, and Zlatan offers to give them these tickets – after also hearing their stories. He goes inside to freshen up and finds a football inside a gift box. When he peeps into the box and holds this ball, it suddenly opens up to show a fluorescent green-tinted layer inside. A ghastly, little slug walks out and starts screeching. The kids hear this screech and one of the boys runs inside to see if everything is fine. He sees Zlatan getting infected by this creature and turning into a green mutant. The slug bites Zlatan’s ponytail to turn him into a vile creature and then once he gets infected, he runs away, breaking the wall.

Since the kids witness it in person, they decide to find Zlatan and save him. On their way, they meet Megan Rapinoe. Since Nautai is a huge fan of hers, she is constantly looking to get a selfie with this celebrity. While the monster version of Zlatan jumps around in the city creating havoc, Megan also gets bitten by a slug and turns into a mutant. Meanwhile, Weird Al Yankovic, who is a famous doctor in this city, becomes a mayor with huge public support. While that happens, Zlatan’s ponytail becomes a talking creature in itself and starts swaying him towards doing some evil tasks.

The kids manage to help Megan escape the slug’s mutant spell with a whoopee cushion, that Nautai was carrying around her all the time. They consider it as a solution to find the bite of the slugs. While Zlatan decides to get to the bottom of Al’s sudden rise to success, he realizes that it is Al’s plan to sabotage his success at the All-Stars tournament. Al wants the prestigious cup for himself. The slug sucked up all of Zlatan’s talent and made Al as talented as him. After this, he also plans to do the same with more stars.

After some time, Al reverses Zlatan’s mutation while cutting off his signature ponytail. While locked in chains, he cries for the loss of this feature. He feels that he has lost all power as a result of this and wants to get hold of the ponytail back. However, Al manages to get it himself and attaches it to his hair. He turns into a powerful mutant himself, who is more skilled in football than the likes of Zlatan. Meanwhile, in the players’ dressing room, the kids and Megan try to see if any one of them is a mutant. They try using the whoopee cushion, which does not work with one player, who turns out to be a mutant. 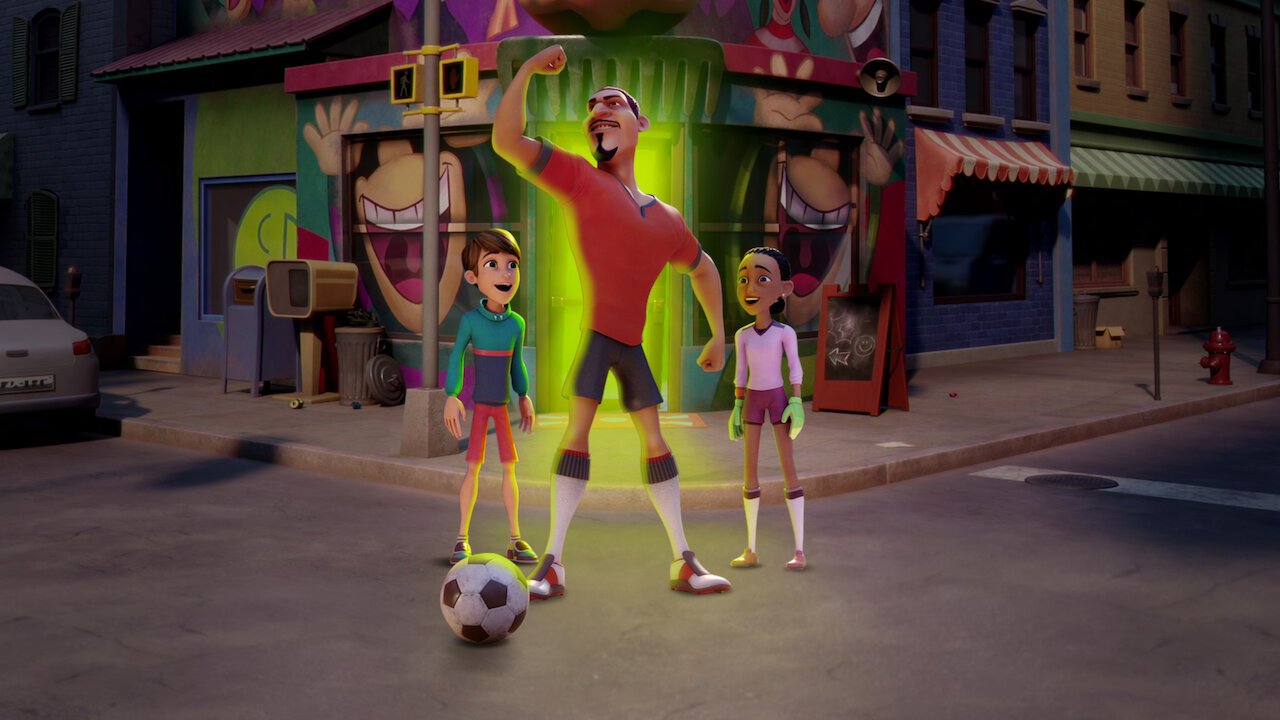 A tiring borefest in the name of comedy adventure

The Soccer Football Movie tries fusing tired tropes of comedy in its adventure narrative filled with its share of tired tropes. What you witness throughout its duration is nothing new or revolutionary and finds humour in spots where most such commercial family-friendly films have tried to. While on one side, the kind of punchlines it uses may be according to market research what the kids want, it is an assault on all my senses to put myself to watch this movie.

While I can keep my reservations for such 3D animations aside (that I have a personal distaste for), there is not even a moment of genuine emotion felt in the film. Everything is dealt with in extreme rush, and when there is a bit of pause, it is used to present terrible comedy routines – from fart jokes to lingo-based dialogues. None of them presents any emotion and seems to be there only for the lack of imagination about adding anything else over there in those specific spots from the film.

While Hayao Miyazaki’s films navigate children’s fantasies, they have genuine moments of awe, thrill, and understanding. Nothing feels invented or fabricated to suit a particular demand from the market, since his projects are not considered products to be used in industry. The Soccer Football Movie sadly ends up being such a kind of commercial borefest.

Animation is a strenuous field of work and the artists, work tirelessly to build the characters to shape the work the way we see in its finality. I appreciate the efforts that went into making The Soccer Football Movie. However, a bad script makes all the efforts go in vain. The legends like Akira Kurosawa have said it decades before that you must have a script to work to have a good film. Only if the artists today can understand and work accordingly, the effort of skilful craftspeople won’t go to waste.

While the lack of skills disheartens Zlatan after losing his ponytail, the kids help him get his mojo back and train him to play just as effectively as he did before. All of them run back to the stadium to play in the All-Stars tournament so that Zlatan can get the All-Star Cup All-Star of All-Stars of All Time, as he wished to have, and was considered to be deserving of. Megan, Zlatan and all the kids decide to play as a single team and run to the stadium with a winning spirit. Al stands on the opposite side, with a determination to win.

Slug mutants play from Al’s side, and while his team keeps scoring one goal after the other, Zlatan’s team struggles to keep up. However, they learn some tricks to overcome their limitations and start scoring goals as well. Over time, the stadium starts cheering for Zlatan like before and Al loses faith in himself. The ponytail then decides to leave his body, thinking that he does not deserve to have this talent. It also deflates him as if he is an inflatable object.

Since the mutant ponytail is determined to get all the talent possible, it turns itself into a giant creature that looks somewhat like a giant mouth with an eye in the middle. While it eats all the slugs, Weird Al gets inflated back into his regular form and everyone seeks vengeance against the giant ponytail creature, together. In the end, they all win over this evil and start playing football on their own, outside the tournament. However, the fear of the slug persists, who might unexpectedly return anytime in their lives to create havoc.

Where to watch The Soccer Football Movie

Mississippi Grind; Why You Should Revisit Ryan Reynold's 2015 Era