Lucy 2014 Ending, Explained: Lucy is an American action thriller with many undertones of spirituality laced into action sequences, the characterization of a super-human female who unlocks every cell in her brain. The film is a close look into the brain’s functionality that works on a level unknown to humankind. It is fiction supplying enough thrill for us to understand and align with the science of possibilities for the future of humankind.

Director Luc Besson moves us with a film that boggles our brains (pun intended considering what the film talks about) with facts that make us think about the possibilities of the brain functioning at such high levels; the consequences of the same seem almost ridiculous. Contrarily, the way medicine and the world are going, and it does not sound entirely impossible.

This incredulous and exciting piece of film that delves into the creative world of neuropathy and brain function makes for an engaging watch as the protagonist Lucy (Scarlett Johansson), a simple student studying in Taipei, is suddenly put into a dangerous situation. This situation changes her as an individual and makes her question everything about her new reality only because of a synthetic drug produced from a specific hormone of a pregnant woman, severely altering her whole being. 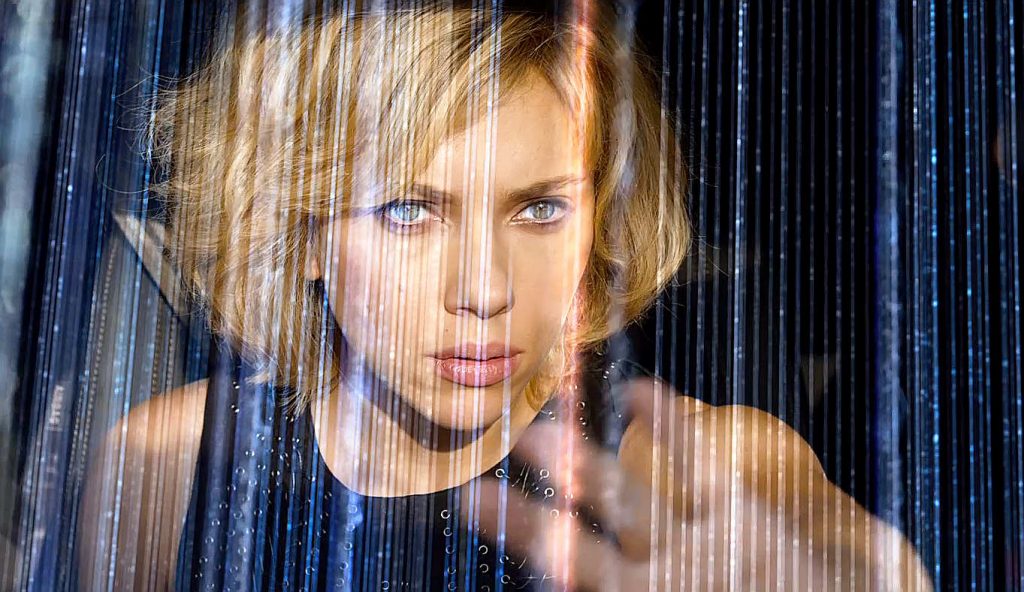 What Does Lucy Do To Understand The Drug CPH4?

The brain controls our thoughts, memories, and speech along with the movement of the arms and legs, with the function of many organs within our body. With the many aspects of the brain ruling certain parts and functions of our body, the human brain functions at about 10 percent of its normal capacity. Further note, the central nervous system (CNS) is composed of the brain and spinal cord.

While these functions are allocated to either the left or the right side of the brain, every experience we go through in life is experienced through these functions and lodged within our brain as memory. The film displays a distinct possibility that there is a high likelihood of a drug that could be produced to help us experience memories from very far back in our past, in detail of our present and the future as and when we wish to experience it. Only it has one caveat. Your body cannot exist at the same time. Or rather, you become a particulate cell of the galaxy transcending through both space and time, backward and forwards.

The story is meaningless in the film when it tries to follow and break down the science behind neuropathy and brain function. When trying to explain what Lucy wants to achieve, it just becomes a task. The truth is she does not know herself. She is a cell only learning about herself and becoming more acquainted with the world devoid of emotion that remotely leans towards power, the greed for money, and, the most dangerous of all, the realization of the want to conquer. With purposeful intent, Besson brings us a character devoid of these emotions.

The film begins with Lucy, a student in Taipei, who is thrown into a dangerous situation when her boyfriend forces her to make a delivery that changes her life. When she makes the delivery, she is taken into the room, and Mr. Jang, who does not trust her boyfriend, gives her the code to open it. After the contents of the case are realized to be synthetic blue pills known as CPH4, a drug made from the hormone secreted from a pregnant woman in her 6th week of pregnancy, Jhang’s principal doctor decides to recruit Lucy as a drug mule along with a few others and send them across to different parts of the world.

When Lucy is taken after the bag of drugs has been inserted underneath her tummy, she is put into a room to be kicked viciously. The bag underneath her stomach breaks, and the drug begins to synthesize with her system entering her bloodstream. She experiences the drug for the first time. After doing so, her brain snaps to complete attention. She is a new person in a physical body who only perceives physical reality; however, because of her higher-functioning neuropathic transmitters, she is only experiencing 20% of her brain activity. She observes a tree’s stem cells moving through its veins as it begins to glow like a Christmas tree. It makes her move faster than usual. Since the brain makes all the decisions, the heart only steps in when it takes a break to absorb the present moment.

While trying to understand the world of computers, her calculative ability, and her heightened sense of brain function (now growing slowly in its capacity), she can connect to the technological world as if she is one with the parts of a computer. Once she frees herself from the room, she knows how to work a gun and survive. A certain instinct tells her she needs to know more about the drug, so she returns to Chang’s office.

When Lucy’s brain is slowly peaking at 28 percent, she connects to all sorts of technology almost seamlessly. When she visits a doctor and forces him to repair her shoulder and have the pills removed from her tummy, he explains to her that her brain is not operating at a normal rate and hence will wear her body out to meet a speedy death. She understands that time is running out, and within 24 hours, she can meet her death. It forces her to track the other shipments of the drugs. She returns to Chang’s office and absorbs his previous memories to recollect the locations of the other drug mules. 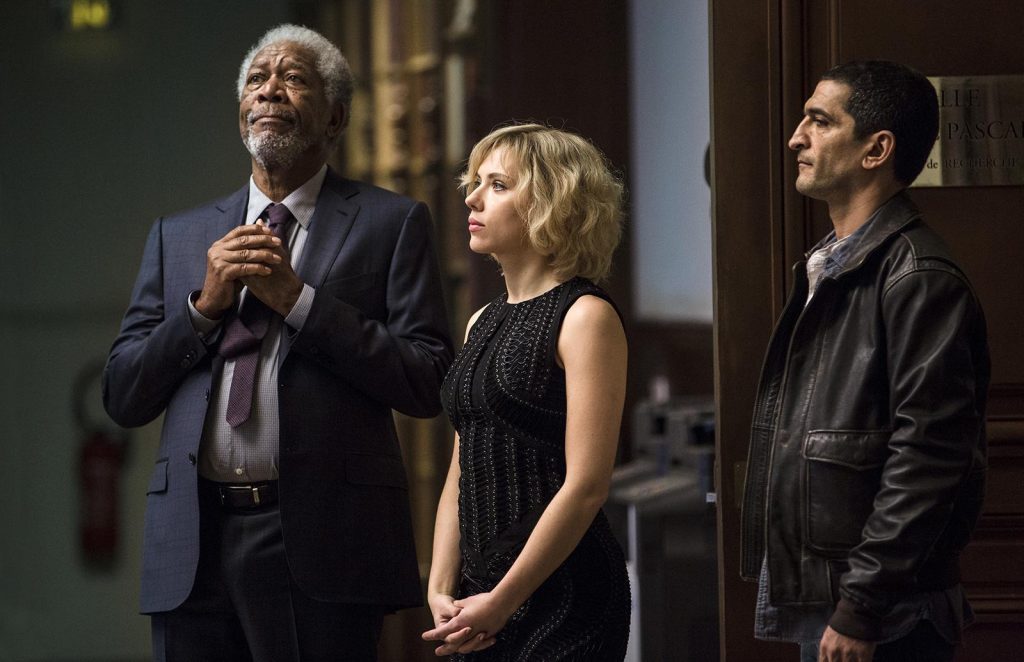 After going through all the research on CPH4 and a high-functioning brain, she appears on Professor Norman’s (Morgan Freeman) phone and his television screen to tell him she is willing to cooperate with him regarding being part of a study of the human brain. After understanding that her body is about to wither at an incredibly fast rate, Lucy must work quickly to consume the rest of the drugs to live through the day.

Being able to transform is one of her newly discovered abilities, and she wastes no time. As every cell in her body is activated, it almost acts as an individual free cell moving out of her body and changing its identity at will. It helps her transform into a new entity and become a new person at any time. Through Jang’s memory, she disguised herself to the point where all the drug mules were currently located. Jang’s Korean entourage is heavy at work to try and frantically track the drug mules from Captain Pierre Del Rio’s grasp.

Lucy beat him to it by notifying Captain Del Rio about where the drug mules are, and he immediately puts his task force into motion to find these men. His subordinates screen them at Immigration at different airports. While she is on the plane to meet with the Police Officer, things get out of hand when her body starts to split, and her skin starts to disintegrate. Her body is fighting with her to disintegrate and become one, with the universe turning her invisible, but she needs to stay together physically.

With her brain function at 40 percent, she has run out of all the previous stock of CPH4 and needs more to stay alive until she is ready to embrace an inevitable death. She uses the last bit of the stock to open her eyes, finding herself in the hospital. When she wakes up and sees Del Rio, she immediately gets up and starts moving toward where the drug mules are. Under the custody of the Police, the Koreans manage to track the drug mules, and a battle ensues where the drug mules are killed. The Koreans manage to remove the pouches full of pills, but Lucy gets there in time to acquire it without letting them touch or harm her.

At 70 percentile brain function, she has consumed all the remaining drugs and moves towards Professor Norman’s laboratory at the University of Paris. Jang has also followed her with his men. She sits down with the Professor and his colleagues to take one last large dose of CPH4. Her body suddenly bursts through time and dimensions. She moves slowly and vividly into the past through the stone age and meets Lucy, the last living ancestor of Human Kind. In the corridor outside, Del Rio is defending the room, and Jang is firing heavily at him to gain access to Lucy.

While her brain function is reaching a full 100 percent, a missile is launched, hitting the room and thrusting Lucy into another dimension. She meets the dinosaurs. Taking in all the information, her body connects to the computers and servers in the lab. She produces a dark substance (almost like Venom) to learn everything about the world today. It makes her produce a new generation of computers, combining human and computer intelligence. Her body produces a new standing figure in black, acting as a live system, connecting every particulate matter in the universe. In the end, she makes a pen drive of all that she has learned and outstretches it towards Professor Norman. No one can see her in a physical form because she has embraced death as a transient being, existing between both life and death, therefore not completely dead.

While in an interview with a journalist, Besson talks about how this idea came about. While he was sitting with a neuroscientist, he had a very engaging conversation with her about what she does while assuming she wanted to be an actress. His fascination with the subject led him to dig deep for nine years, and after many more conversations later with different neuroscientists, Besson learned that he could make this work.

While it may have been unusual to cast a woman in such a role, it was done to understand that a man might not have contributed to the audience’s greater interest in the narrative. While making her devoid of emotions that leaned towards sin, he embraced a different avatar for her. Somewhere, one would notice a sense of The Messiah complex that feeds into the possibility of a spiritual undercurrent. While this may have a particular tonality, the purpose of the story not making sense or sounding relatively weak was created with the clear intent of aligning more with science. The film is a thrilling watch that engages the viewer with fantastical trivia and whispers of a distinct possibility for a sequel.

Where to watch Lucy

Everything Coming to Netflix in September 2022