Blockbuster (Season 1) ‘Netflix’ Review: Making a workplace sitcom about the last standing and clearly struggling Blockbuster video store is quite gutsy and meta for Netflix, considering the latter itself had played an undeniable part in Blockbuster’s demise. The promise of two of the most flawless comedy favorites, Randall Park and Melissa Fumero, coming back in yet another workplace comedy has been so exciting that the premise didn’t even matter for the most part. And that’s justifiable for fans waiting for a show made by the creators of some of the best sitcoms out there and starring their absolute favorites. But Netflix’s new workplace sitcom seems to have done the same as well. What starts off as a comedy about the employees in the last Blockbuster, entirely lets go of its individuality along the way and becomes just another workplace comedy that could’ve taken place in any other setting.

From the mind of Vanessa Ramos, a comedy genius who has been responsible for the likes of Brooklyn Nine-Nine and Superstore emerges the brand new Blockbuster with a cast so airtight that nothing could go wrong. Or so we hoped. The show follows Timmy, the owner of what now is the last standing Blockbuster video store, as he tries to keep the store open with the help of his oddball employees. Sure we all miss Superstore and wouldn’t have said no to a slight reminiscence of it in another feel-good sitcom. But what Blockbuster delivers is a flat, often unfunny, and pretty forced version of Superstore itself. Here’s to hoping that the entire first season took its time to set up, much like the 90s or early 2000’s sitcoms, and the next season will actually be funny. 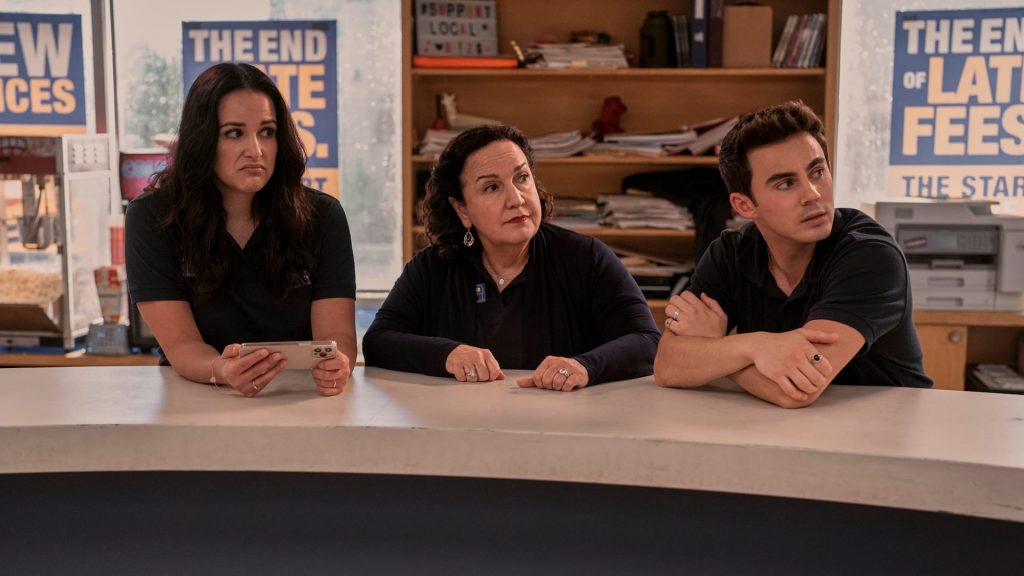 A call from corporate letting Timmy (Park) knows that his Blockbuster store is now on its own, has him spiraling about what he can now do to make sure that his store survives. And there enters his knight in shining armor, Eliza (Fumero), a Harvard dropout who is going through a messy separation with her cheating husband Aaron (Leonard Robinson). Eliza suggests that they have a block party which will remind people of the comfort that small businesses provide, unlike the impersonal internet. The party which was supposed to be small gets blown out of proportion with a giant inflatable gorilla, foam machine, and a DJ battle when the next-door party store owner, and Timmy’s best friend Percy (J. B. Smoove) gets involved. A fireworks accident sets the massive gorilla on fire, turning the party into absolute mayhem. However, Timmy reaches his ultimate goal of communicating the importance of his small business to the masses when store employee and wannabe filmmaker Carlos (Tyler Alvarez) films the massacre and it goes viral.

Just as he’s starting to feel good about being the new Blockbuster Daddy, Timmy realizes that he has to let go of one of the employees. With the help of Percy who does not want his teenage daughter Kayla (Kamaia Fairburn) to get fired, Timmy comes up with the idea of a sneaky reverse interview which would help him determine who deserves the job the least. His feelings for Eliza cloud his impartiality while his otherwise wholesome nature makes him overlook the hilarious flaws of every other employee. He decides that he will fire Kayla but is promptly reminded that her father Percy owns the building and will not let him get away with it. Kayla however, puts an end to Timmy’s misery by trying to quit.

Percy, scared that he won’t be able to spend as much time with his daughter if she quits, decides to pay her salary and makes Timmy hire her back. Meanwhile, Carlos is broken up about local film reviewer Hollywood Harold’s death and comes up with the idea of dedicating a section of the store to Harold’s memory. While Timmy, Percy, and Eliza come up with ways to get back at Carol’s twins for their incessant pranking, Kayla and Connie (Olga Merediz) get busy trying to figure out whether Hannah’s (Madeleine Arthur) dead mom was a victim of the serial killer they’ve recently seen on Dateline. After a disastrous adventure involving the menacing twins, Timmy gets the scare of his life when he finds out that his best friend and landlord Percy has given his store a 2 months ultimatum.

Timmy gets hopeful about saving his store when he’s nominated for the local small business owner award which comes with the prize money of 5000$. As Connie gets obsessed with completely transforming Timmy into a charming boss in order to impress the judges, Timmy ignores Eliza’s warning once again and ends up lighting the store on fire. Needless to say, he doesn’t win the award.

With Eliza getting back together with her husband, Timmy decides to try and move on by making a tinder account. His jealousy when he hears that Eliza is planning a romantic evening with Aaron ends up with him accepting the desperate advances of local dog groomer Rene. But Percy and Kayla have something spicier planned. Kayla accepts several date requests for Timmy on the same night and three other women show up at the bar. Timmy’s misery is short-lived as the women find a lot in common among themselves and end up having a great time.

Eliza plans on treating herself to a day of sitting on the couch and binging a show without her husband there. Her plan however is ruined as she has to work overtime for the store’s sudden inventory day. With Timmy getting called away to serve his manipulative parents, the entire burden of the inventory falls on Eliza. After several back and forths, Timmy puts his foot down and comes back to the store to relieve Eliza of her duty and finish doing inventory by himself.

Timmy is excited to exhibit the plate that was apparently used by Anthony Hopkins in Hannibal, in his store. Percy, who clearly has boundary issues and walks all over Timmy, ends up using the special plate to heat up his stinky fish. Meanwhile, Connie is grieving the death of her best friend and after trying and failing to watch the 30 years running telenovela, Eliza gives up on her pursuit of becoming her new friend and decides to look for one instead. As luck would have it, Connie and the nail salon owner Patrice hit it off over creepy collectibles and become besties.

Frustrated with his feelings for Eliza, Timmy starts dating Carol’s sister Lena (Stephanie Izsak), and convinces himself that he wants it to go somewhere. Love can’t be contained, however, as he finds himself postponing important errands and taking care of Eliza for the entire day when she has a meltdown about her husband’s mistress visiting the store. He even goes as far as to keep it a secret when he finds out that Eliza has been lying about rejecting a job that she didn’t even get. Eliza is also drawn to Timmy and is visibly jealous whenever she sees him with his girlfriend. To bring more attention to the store, Timmy decides to bring in a washed-up actor who used to be a star when he was a kid. However, not so-little Lil’ Stevie isn’t the kid-friendly child actor anymore. Other than the very few moments saved by Park and Fumero’s comedic timings, Blockbuster is rarely funny. For a show that is supposed to be centered around the main trope of a failing small business, Blockbuster completely loses track of its main goal as soon as the first episode ends. Granted it isn’t easy to get started off right away as a whole other lead especially when her entire image became about the last lead she had played; Melissa Fumero takes a while to feel easy on screen as Eliza. Her Amy-ness was peeking right through her character and the blame is on the writing.

Blockbuster offers absolutely nothing new. Be it the content or the characters and their quirks. Everything is as cliche as it can get. The scope of utilizing the interesting plot it had–saving the last Blockbuster store on earth–is wasted on a show that simply didn’t even try to bring anything new to the table. Just a great cast can make the show somewhat watchable, but it doesn’t save it on any level.

The performances were as good as they can get with a screenplay this uninspired and bland. Fumero and Park did their very best to bring life to the characters that would’ve suffered even more without their skills. Their romance however is not very convincing. As for the supporting cast–yet again a group of talents was completely wasted.

With workplace comedies reaching unbelievable heights with The Office, Parks and Recreation, Brooklyn Nine-Nine, and even Superstore, it is certainly not enough to throw a bunch of wholesome characters in a random setting and expect it to work. And that is the only lingering feeling that Blockbuster will leave you with. Adding to the list of bad Netflix originals, Blockbuster will fade in the back of our minds exactly as fast as we got excited when it was announced.

Did Timmy manage to save the store?

The Lil’ Stevie event is an absolute disaster when the drunk retired actor dressed as Santa starts throwing obscene remarks at the children and their parents. They all leave the store despite Timmy’s hopeless attempts at getting them to buy the signed DVDs. Depressed after his failure, Timmy goes to the bar to get drunk and forget about the store for a while. When Eliza goes to comfort him, she is genuinely upset to see that Lena is already there with him and Timmy isn’t as depressed as she thought.

The solar storm wiping off the internet gets all the parents to drive back to the store. They absolutely need some sort of entertainment to keep the kids contained. All these people renting movies give Timmy hope that maybe he can save his store yet. Meanwhile, Eliza is ambushed with a surprise re-proposal by Aaron. While she acknowledges that Aaron has tried his best to save the marriage, she knows that she doesn’t love him anymore and that she has feelings for Timmy. She rejects Aaron’s proposal and comes clean about everything.

In all the commotion, Timmy sees Aaron on bent knees and assumes that Eliza will say yes to him. Lost in his thoughts, Timmy ends up calling Lena by Eliza’s name and effectively ruins his own relationship. Eliza decides that she will confess her feelings to Timmy. However, She is unable to get his attention as he’s busy trying to stop a fight between two parents wanting the same movie. The fight escalates like a bonfire and turns into a crazy destructive looting of the store. Standing in the store that has just been destroyed, Eliza tries to comfort Timmy, but he seems to have given up on the idea that the store can be saved.

Also, Read – If Only (Season 1): Recap & Ending Explained – Does Emma Manage To See Her Kids Again?

Where to watch Blockbuster (Season 1)

The Banshees of Inisherin (2022) Review: A Seamless Work of Farce and Sorrow