The Peripheral (Season 1), Episode 4: The latest episode of Amazon Prime’s cyberpunk series ‘The Peripheral’ has just started to peak with a peek into the intricate world of William Gibson’s novel by the same name. Scott B. Smith, the creator of the show, has been careful to not dabble in exposition. ‘The Peripheral’, instead, uses cues that float the ideas, which paints the whole picture. The world-building in this show, especially for Cyberpunk fans, would be the key attraction to continue to wait for the subsequent week’s episode.

The Toll of the Peripheral

The episode starts with a quick flashback to the struggling childhood days of Aelita and Wolf, where a succinct picture is painted on the lives of the lesser privileged ones in the world of the 2090s. We come to the present day and see Wolf (now Wilf) (Gary Carr) report to Lev Zubov (JJ Field) about the implant and chips he and Flynne (Chloe Grace Moretz) found in the last episode. Lev comments that without her implant, Aelita might not survive for long.

Meanwhile, venturing into the future via the Peripheral headset has taken a toll on Flynne. After the deputy chief of Police, Tommy (Alex Hernandez), pays them a visit, Flynne and her brother, Burton (Jack Reynor) get into an argument. During the argument, one of Flynne’s eyes gets red and she starts to have a seizure.

After Daniel (David Hoflin) was killed in the fight against Flynne and Wolf, Cherise Nuland (T’Nia Miller), head of the Research Institute, recreates her favorite henchman in android form. The android Daniel is able to tell her about Wolf’s connection to Lev. As Lev is watching his wife, Dominika, through a hidden camera that feeds to a contact lens worn by him, Cherise pays him a visit.

Their conversation reveals a lot of things. Firstly, Lev’s wife, Dominika is from a rival Russian oligarchy family. Lev, as hinted before, has his dark secrets too. He has once betrayed his friend, Yuri Samsonov, which helped the Research Institute, or RI, kill Yuri. Cherise threatens Lev about a weapon RI possesses, which helps eliminate the entire lineage of a person if they can get that said person’s DNA. When Cherise leaves, Lev notices she has taken his cup, from which he was sipping tea. Implying she has his DNA now. 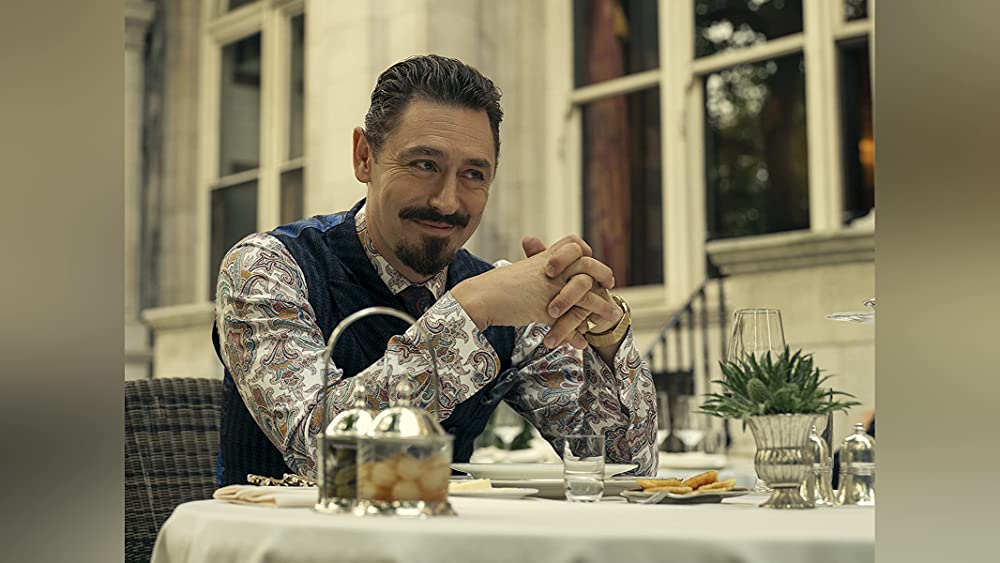 Burton takes Flynne to a clinic where the Doctor is Dee Dee, fiancé of Tommy. Dee Dee says the seizure, which she describes as ‘Tonic-Clonic’, has not left a mark on Flynne. Burton tells her half-truth about entering the Peripheral. He says that Flynne is playing a simulation that affects her like this. Dee Dee asks her not to play and asks Burton to provide her with the name of the simulation and its manufacturer.

Back at their house, Burton discusses the safety of the Peripheral with his friends. Conner (Eli Goree), on account of being triple amputated, could not help but volunteer himself to go to the future via Peripheral. Obviously being able to virtually attain his missing limbs acts as the main motivation for him.

Conner gains access to Flynne’s Peripheral but was quickly cut off by Ash (Katie Leung), the technical specialist Lev. But not before he lets Ash know about Flynne’s seizures. This makes Wolf visit Flynne in one of her home video simulations. Wolf tells Flynne about Conner; and that they are going to check the safety of the Peripheral before Flynne logs in again. Flynne also tells Wolf about an incident in her timeline. An incident involving Lev Zubov and his family being killed.

This makes Wolf confront Lev. And Lev confirms that he has this other Lev Zubov killed. Lev has Aelita poke around in RI to create stubs for his own purposes (Stubs are different timelines in the Peripheral world). Lev was tormented by the idea of his other versions existing in different stubs, he calls it ‘Existential Nihilism’. That is why he killed his other version in Flynne’s stub.

Scott B. Smith has started to show the true potential of William Gibson’s world in ‘The Peripheral.’ The fourth episode, titled ‘Jackpot’, elaborates further on the already intriguing world that has been portrayed in the series. Each episode shows a new glimpse of the technological marvel of the future, as well as new instances of moral depravity. It also sets its murky antagonists fascinatingly.

The production design has been top-notch, now the show flaunts its CGI potential too. Chloe Grace Moretz once again gets the chance to shine. She and Gary Carr have started to show a growingly appealing chemistry. While T’Nia Miller and JJ Feild are exploring different paths of portraying antagonists. Both with equally satisfying results so far. 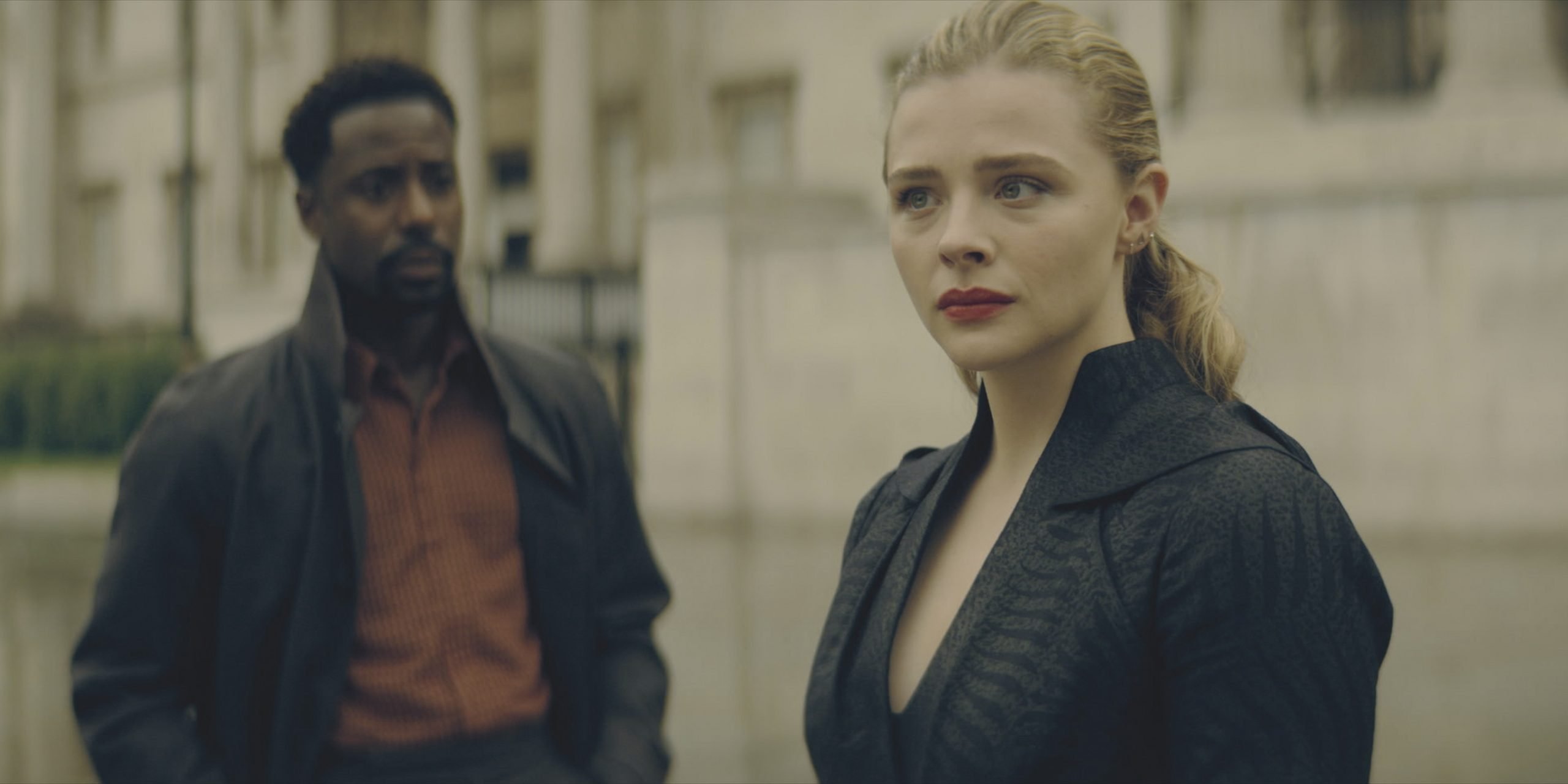 Flynne confronts Conner and Burton about visiting the future via her Peripheral. They convince her that to beat the others in the future, they need to play it as she used to play VR games. She needs to understand more about the world, which is 2100 London. And it would not do harm to get Burton and Conner as a backup.

They show her how the ‘Jackpot’ or apocalypse came to fruition, in their past and in Flynne’s future. It was not one single thing. But a series of catastrophes. First a global electrical failure, then a pandemic; followed by a complete and total environmental collapse, and finally a domestic terror attack wiping out America.

Flynne could not take this and gets out of the Peripheral. Upon being asked by Burton whether she could get bodies for him and Conner, she replies that she is looking into it.

The trio of RI (Research Institute), MET (Metropolitan Police I presume), and the Klept have kept the world alive after ‘Jackpot’. This got revealed in the conversation between Cherise and Lev. The Klept, formed by Russian oligarchs, used violence to build the world order and provided a happy life, for those who could afford it. The MET look after the law and order and RI provides and controls everything technical.

The conversation between Lev and Cherise sets two different kinds of antagonists for the show. Cherise is the technological opponent, extremely formidable and ruthless. Lev on the other hand, under the suave guise, is a gangster with wealth and power, and equally ruthless.

Where to watch The Peripheral