Peacock original documentary Sex, Lies and the College Cult (2022) by Robert Palumbo chronicles the unbelievably evil deeds of Lawrence Ray aka Larry. It offers a textbook example of how a malignant narcissist subtly gains the trust of a circle of people before trapping them within an unstoppable cycle of abuse. Larry Ray was accused of brainwashing a group of vulnerable and unsuspecting students from Sarah Lawrence College – a private liberal arts college in NY – in order to serve as his underlings for more than five years. Larry initially manipulated them by being a benevolent father figure. But soon, he controlled them through terror and paranoia, while also relocating himself and the students to a Manhattan apartment. Larry Ray turned the one-bedroom apartment into an abusive cult-like atmosphere.

Who Is Larry Ray?

According to Sex, Lies and the College Cult, Larry Ray had some powerful friends, including former New York City police commissioner Bernard Kerik. He was born in 1959 and grew up in Brooklyn. Larry had been a shady figure right from the earlier days. He is a psychotic con man, and his deceptive skills allow him to create a false aura around him. While he always portrayed himself as a Marine, he was actually in military service for only 19 days. He was discharged from Air Force in 1981, the reasons behind it aren’t clear. 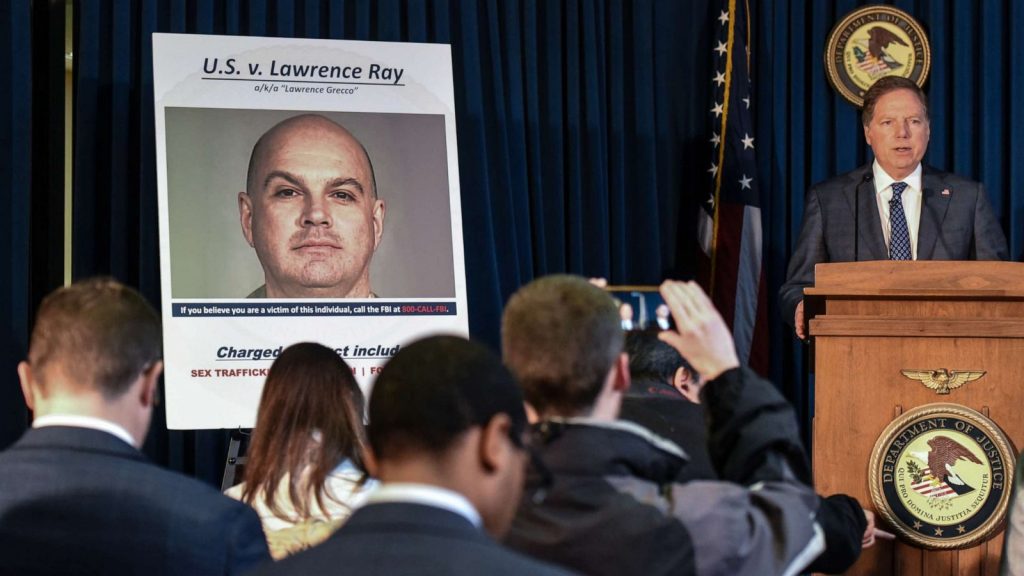 It’s mentioned in Sex Lies and College Cult that Larry Ray had mob connections and his sources of income are often a mystery. He enjoyed a short-lived yet strong friendship with Bernard Kerik. Larry even served as the best man at Kerik’s wedding. In 1997, Larry is said to have brokered an introduction between former Soviet Union President Mikhail Gorbachev and the then-NYC Mayor Rudy Giuliani through Bernard Kerik. In 2008, Larry turned into a FBI informant against the mob in relation to a securities fraud scheme. The FBI, however, understood that he isn’t simply an informant, but was also involved in the scheme. Hence, he was coerced to become a co-operating witness, which led to a minimal jail sentence.

The case also created bad blood between Larry Ray and Bernard Kerik. Subsequently, Larry tipped off authorities on Kerik’s ethics violations and tax frauds. Kerik was convicted on the federal corruption charges and was sentenced to four years in prison. Larry Ray married his college sweetheart Teresa. They had a child named Talia. The couple divorced when Talia was a kid. In fact, a custody dispute eventually landed Larry in prison for a brief time.

In 2010, Larry Ray was free. It’s where the narrative of Sex, Lies and College Cult begins. Larry had nowhere to go and almost lost all of his connections. Therefore, he decided to move to his daughter Talia’s dorm room at the elite Sarah Lawrence College. Long before Larry made his appearance at the dorm, Talia had been gushing about her powerful yet persecuted dad to her naive housemates. Talia’s housemates were Claudia Drury, Santos Rosario, Daniel Levin, and Isabella Pollok. Immediately after stationing himself in the dorm, Larry started playing the role of a father figure to these lonely youngsters.

It was the sophomore year and the impressionable 19 or 20 year olds were dealing with wide-ranging psychological issues. Since Larry established himself as a life coach, Talia’s housemates started to confide in him. Besides, Larry seemed to be seriously listening to them and vowed to help them with their issues. But once he learned everything there’s to learn about his daughter’s housemates, he commenced his sick mind games. While this set-up looks like a very creepy arrangement now, the students weren’t bothered until they perfectly fell into his trap. The parents did complain to the college about this situation, but nothing came of it.

The God, Punisher, and the Devil

As the cult experts in Sex, Lies and College Cult explains, in the eyes of Claudia, Santos, Dan, and Isabella, Larry Ray was a deeply compassionate soul. They thought he had solutions to their emotional and sexual issues. During the winter break at the college, Larry Ray tightened his hold on the students. Talia and Isabella temporarily relocated with Larry to a Manhattan apartment, which belongs to his business man friend Lee Chen. Chen has observed that Larry was sleeping in the same bed with Isabella. Soon, after the end of spring semester at Sarah Lawrence, the rest of Talia’s housemates also moved to the Manhattan apartment.

Talia’s role in helping her dad forming the microcosmic cult isn’t explored clearly in the documentary. But Talia wasn’t staying with her former housemates at the apartment, when Larry gradually employed his mind control strategies on the youngsters. Larry made tons of videos about the alleged therapy sessions. He held these sessions over hours in the daytime, and also called for nocturnal therapy sessions. By denying them sleep for days, he overrode their ability to think.

Larry is said to have repeatedly used sex as a tool to destabilize the group. Moreover, he rewarded and punished the pupils according to his own sick rules. Most importantly, the man pitted one person against the other in order to annihilate any sense of camaraderie. In this sense, Isabella even became an accomplice in Larry’s evil deeds.

How Larry Used Paranoia to Create a Closed Environment?

Sex, Lies and College Cult goes on to explain how apart from the aforementioned four, few others also fell into Larry Ray’s deadly trap. Talia’s boyfriend Iban Goicoechea was influenced Larry’s fake tales about being part of Marine. Iban joined the Marine and went on a tour to Afghanistan. He came back to States suffering from PTSD, and eventually landed on the apartment. Iban became Larry’s gofer, and the young man firmly believed in Larry’s tall tales. For instance, Iban felt that Kerik and other powerful people are out to get Larry. And according to Larry’s logic, these shady people would get their revenge by harming people closer to him.

It’s the same feelings of paranoia Larry Ray inculcated in others too. Soon, after Iban’s arrival, Larry started indoctrinating Rosario’s older sisters – Yalitza and Felicia – into his cult-like set-up. Felicia was doing her medical residency, when Larry charmed her through hours-long phone calls. He made her believe that she was in love with him. Larry not only controlled Felicia remotely, but also commanded her to satisfy his bizarre requests; for instance, he ordered to have sex with strangers and record it. When Felicia was totally under his control, Larry used similar tactics he used with Iban to instigate her paranoia. Subsequently, Felicia moved into the Manhattan apartment believing that Larry would shelter her from the external threats.

How Claudia Was Turned Into Larry’s Profit Center?

Larry Ray not only found different ways to control the young people, but also exploited them for his own gain. One deeply cruel scheme showcased in Sex, Lies and College Cult will stay in our mind for a long time. Larry asked the group to move with him to North Carolina for few weeks. He was about to visit his stepfather living there. Talia also joined her dad for the trip. The rest of the group aren’t there for a vacation, but to work round the clock in order to restore the broken-down house and the surrounding land. After toiling for hours and days in the sunlight, Larry accused them of damaging his machinery. Subsequently, he cooked up an imaginary debt that ran to thousands of dollars.

Some asked money from friends and family to pay this alleged debt. But Claudia couldn’t be helped by her parents to alleviate the debt. Therefore, Larry forced her into sex work. He created a website and convinced Claudia that it was the only way for her to pay it back. Surprisingly, Isabella was assigned for bookkeeping the prostitution money. Hence, it was how Claudia worked as a prostitute for four years, seeing up to five clients a day. She ended up earning him at least couple of millions of dollars.

Before Claudia reached her breaking point and thought of leaving Larry Ray, Santos and Dan had already left the psychopath. Unable to endure the abuse, Claudia confided in a client, and eventually made her great escape.

How the World Learned about this Horrific Story of Abuse?

One of the most haunting aspects explained in Sex, Lies and College Cult is how he was able to commit such horrific acts of abuse for a prolonged time. The man didn’t even own the apartment. When Lee Chen saw the pure evil side of Larry, he immediately wanted him to leave. But Larry coolly changed the locks. Chen was denied access to his own home. He had to wait three years before getting an eviction order from the court. Then two years went by before the Marshals enforced the order and threw out Larry Ray.

Many first learned of Larry Ray in April 2019 from a New York Magazine article, written by Ezra Marcus and James D. Walsh. The article titled ‘The Stolen Kids of Sarah Lawrence’ recounted in detail how Larry Ray sexually and psychologically abused a group of students for more than half a decade. The article was immediately brought to the attention of FBI, leading to a formal investigation. In April 2019, when the magazine article was published, Larry was at a residence in New Jersey with Yalitza and Isabella.

Members from the two girls’ families traveled to New Jersey to rescue them. But the girls refused to go with them. Few months later, Larry was arrested and taken into custody. Meanwhile, the news of Larry’s arrest reached Iban. The extremely paranoid Iban was in Oregon living with his Marine friend John Williams at the time. Shortly after Larry’s arrest, Iban committed suicide.

What Happened to Larry Ray?

At the end of Sex, Lies and College Cult, we hear that Ray was convicted of charges including racketeering, extortion, sex trafficking, forced labor, tax fraud, and money laundering.  In early 2022, Larry was on trial for all these charges. All those who suffered from Larry’s abuse – including Claudia and Felicia – bravely took the stand and testified against Larry. At the end of the trial, he was found guilty of all the 15 charges. He is awaiting the prison sentence and he could receive a maximum of 120 years. In 2021, Isabella was also charged with conspiring to engage in sex trafficking and money laundering. She plead guilty and faces a maximum of five years.

Sex, Lies and the College Cult chronicles how charming psychopaths could prey upon bright and talented kids. Like every other bizarre true crime documentaries, Sex Lies and the College Cult (90 minutes) methodically guide us through a string of unbelievable episodes. While the documentary concisely looks into the details of the case, it definitely lacks a deep insight. The documentary tries to sell us that Larry Ray case is truly the most unique one.

Furthermore, it tries to elevate him into a cult leader. Larry used certain tactics of a cult in order to manipulate the students. The sad truth is that there are far worse and more bizarre cult leaders out there, who are skilled at the con game than someone like Larry. Even in the recent times, there was the NXIVM case. It was a more terrifying case and inspired bunch of documentaries and books.

Where to watch Sex, Lies and the College Cult