Once Upon a Small Town (K-drama), Season 1, Episode 10 Recap & Ending Explained: Netflix’s Korean romantic drama has had a stir of events with Choi Min’s decision in the course of her relationship with Ji-yul. While we wait to see what the doctor has decided, episode ten picks from the shocked reaction of Ahn when she witnesses Min and Ji-yul share a kiss. Meanwhile, we also see Sang Hye-on hear from Ahn about what she has decided about their relationship.

In this article, I discuss the significant happenings that make the popular show even more wholesome and entertaining. Spoiler alert – The piece consists of an explanation of the episode’s ending; hence, read at your discretion.

Episode ten takes us to the conversation between Min and Ji-yul from the previous episode. Min wishes he would see her again after his return to Seoul to get back together. She thinks seeing someone often can incite feelings between two people. Even though Ji-yul doesn’t seem interested in her idea, Min wants to give their relationship a chance for old times’ sake. When Ji-yul tries to speak his turn, Choi Min kisses him, and seeing this from a distance, Ahn makes a different conclusion to the entire sequence.

While picking up the corn that Ahn dropped after feeling shocked to see her childhood crush and his ex-girlfriend kiss, Ji-yul notices that she is hurt and upset. When she tries to leave, Ji-yul follows her, trying to tell her the truth, but she tells him not to give her any explanation.

Later Yun-hyeong explains to Han Ji-yul that bottling his emotions towards Ahn would get him nothing. It is always best to share your true feelings with the person in front so you know if the two people have a mutual understanding of things.

In the meantime, after her return home, Ahn and Min get into a confrontation where the city girl asks if the police officer has any feelings towards Ji-yul. When Ahn tells her that she doesn’t get bothered with their brewing relationship, Min is not convinced by the answer. She tells Ahn not to show her affection to Ji-yul because it will only lead him on.

In the next moment, after thinking through his friend’s advice, we see Ji-yul riding his bike to Ahn’s place. Right before calling her to come outside, he gets a text from Min, who wants to continue their conversation from earlier. Seeing her ex’s message changes Ji-yul’s mind about meeting Ahn, so he returns home.

Unable to make things any clearer for her, Ahn visits her best friend at the peach farm. Soon we see Ahn getting emotional after sharing her true feelings to Sang Hye-on, who was waiting to hear an answer he asked her. Ahn feels it is unfair for them to be the same as before if she doesn’t want to take their relationship one step above their friendship. She tells him that even though she loves him, she only sees a true friend in him who knows her too well. And even though Sang Hey-on is visibly upset with the rejection, he still tries to cheer Ahn with his warmth and care. 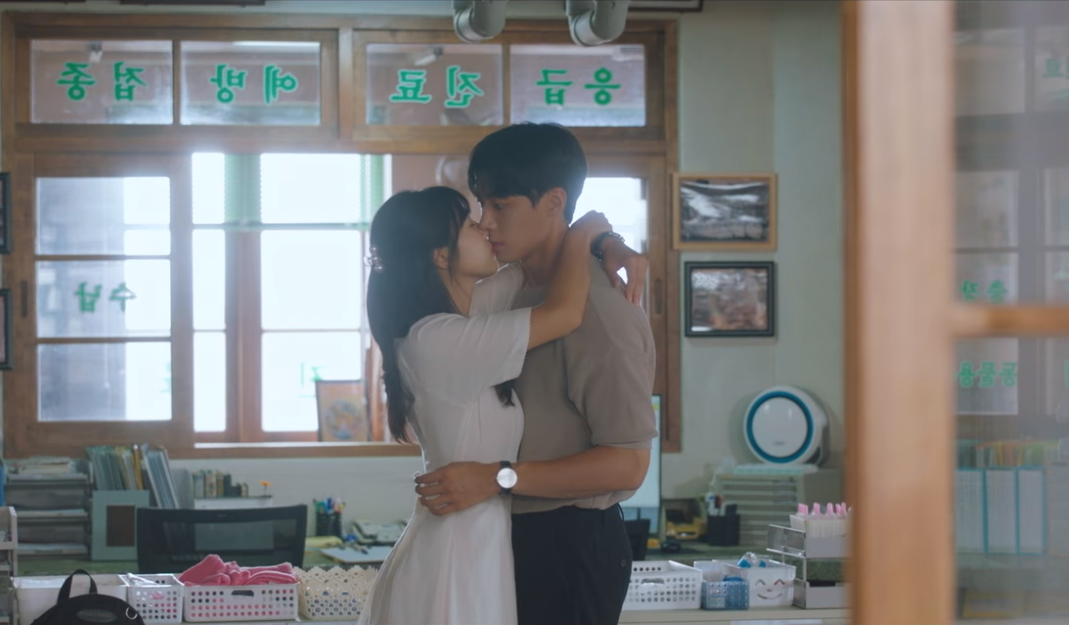 The next day, when Ji-yul goes to the hospital, he sees Min waiting for him. He tells her that he cherished their good times before Min decided to go to the States. However, Ji-yul believes she is trying to get back with him to overcome the guilt of leaving him despite genuinely loving her. Being in Huidong and spending time with his childhood friend made him surer about being in love again when he thought he would never fall in love. Min is taken aback by the drastic change of tone and confidence Ji-yul has about his feelings towards Ahn; hence she decides to part ways with him for good.

Once Upon A Small Town (Season 1), Episode 10, Ending Explained:

In the meantime, Ji-yul looks forward to meeting Ahn, but she keeps avoiding him. When he learns he might find her helping Sang Hye-on, he visits the peach farm. Upon arriving at the farm, Sang Hye-on notices the doctor’s moped face. Siding with Ahn as always, he asks Ji-yul if he is an able guy to keep her well if she agrees to be with him. The two get into their usual conflicts, and soon Ji-yul catches Ahn avoiding him from a distance. He follows her into the storehouse and confesses his feelings to her.

However, Ahn rejects him after hearing what the doctor has to say to her. Since Ji-yul will be leaving the town soon after his grandparents return, she cannot be with him now as it would be the same as before when he left for Seoul.

While heading back to her home, Ahn Ja-young meets Yeong-suk, who tells her that Ji-yul will be leaving soon as his grandparents return from their cruise vacation. She soon realizes her mistake of rejecting Ji-yul after his honest confession about his fondness for her.

However, at the police station, Sang Hye-on lends his ear to his friend, who is upset about the doctor’s packed luggage and his return to Seoul. Ahn finally tells him that she has grown tired of people showing their love to her and leaving whenever they please. Sang Hye-on helps Ahn understand her impulsive answer to Ji-yul could ruin a possible relationship with the doctor.

We then see Min meeting Ahn before saying her goodbyes. She tells Ahn that she thought that she can fix broken things and expected to change Ji-yul’s heart with her overconfident personality. However, she can see that he also likes the officer. Hearing this, Ahn confesses that she lied to Min earlier about not having feelings toward Ji-yul.Though Min already knew about it and claimed they could have been best friends if it weren’t complicated.

After Min leaves for Seoul, it seems things are more evident for Ahn, and she rushes to the Vet hospital only to find Ji-yul sitting quietly by himself. When he sees Ahn, he tells her that he is leaving the town in 15 days; however, Ahn is determined to seal the fate of their relationship. The episode ends with Ahn kissing Ji-yul and setting things right for once.