Broad Peak (2022) is a Polish film that tells the story of a special mountain climber of a particular category called Eight Thousander, the men and women who summit peaks of mountains. They dare the harsh and brutal cold to reach the top against their own body’s wish, based on the clear grit of spirit. This story spells Maceij Berbeka’s dream of summiting the peak of the Karakoram, the 12th highest mountain in the world. 26,414 ft. Imagine moving your body when you are frozen to your bone with no oxygen going through your lungs. Because what you are breathing is ice-cold air. But it is also doing the impossible. What is the impossible? Touching the clouds.

It is funny, but when films are made talking about mountains and climbers, it is just plain scary. One is trying to understand where the passion and (somewhere) borderline addiction from to wanting to summit peaks. On the other hand, one begs the question, how does a human dare survive that mountain to come back and tell the tale?! Temperatures are -40 Degrees Celsius. Being stripped down to the bear size of how fragile your mortality is. It keeps you humble. Nature keeps you humble. It tells you what matters most, what you want in your life. What you love, what you would do anything to stay with forever. Maybe that is what scares me. But it is also something that every climber knows. And wants to be reminded every time they summit a peak.

Respected eight thousander Maciej Berbeka led numerous summits and offered guidance as a leader. He struggled to let go of one summit. This narrative emphasizes the passion that a mountain climber experiences when he confronts the mountain and sees deep into its soul, causing him to doubt everything he believes to be true. 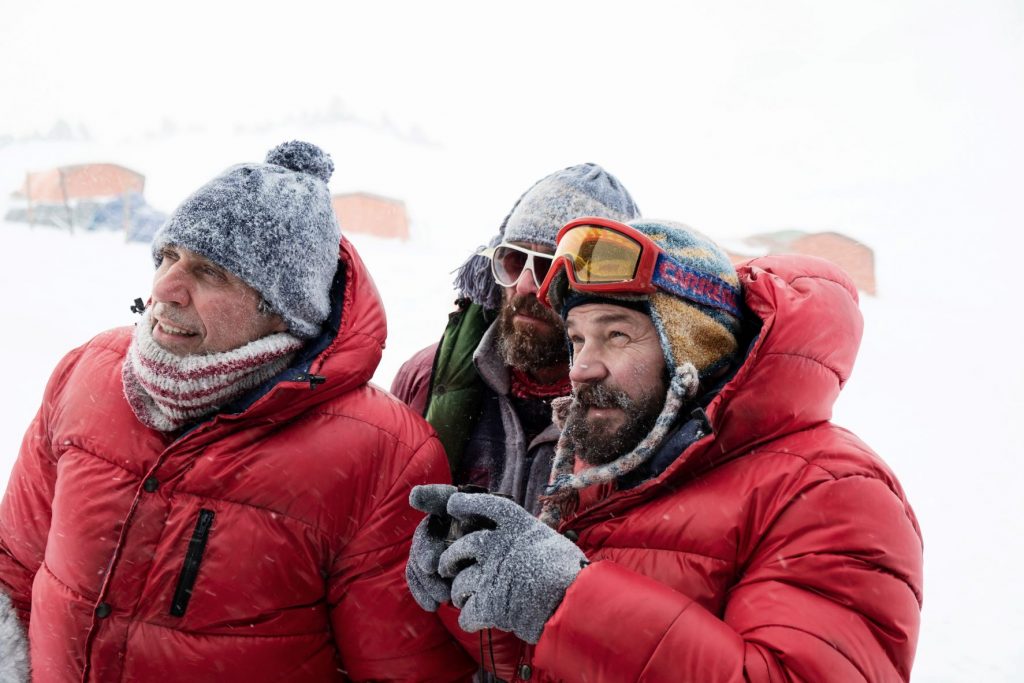 Alek Lwow, a fellow climber, challenged Berbeka in March 1988 if they could both successfully reach the top on their own. It was not always safe because the mountain unleashed severe weather and cold as the altitude rose. Going on an excursion in a group is always preferable for a team of climbers. Life is constantly in danger when there are two persons present. Some places are especially friendly toward death. There is a greater likelihood of success if the sky is clear and all that can be seen is the sun. Some climbers are fortunate, while others are not. That is how mountains naturally are.

As they started their ascent, they continued to communicate with the base camp at the Baltoro Glacier by radio. A storm is building as they start. As they near the Death Zone, which is very close to the ultimate top, Alek starts questioning if they should continue. Although their leader had doubts about the decision, they both had faith in their abilities.

Alek advises them not to take a chance. Berbeka believes moving is better. Alek turns on the radio and tells his leader that continuing is not a good idea. Alek decides to leave Berbeka behind and sends the radio to the leader when they order them to return.

To the second-to-last summit, he starts to climb to Rocky Summit. It gives him a feeling of control over the mountain and combined with the intense wind blowing over his head, he feels as though he has reached his goal and reached the peak. He triumphed over Broad Peak. On the radio, he admits to doing it to the leader. He finally completed it.

When Berbeka peaks at 5:30 pm, he needs to begin his descent. The weather becomes brutal, and the winds almost throw him off. At 8:30 pm, he finally begins to hack at the snow to create a hole and pushes himself inside a hole with his backpack. He waits patiently until the weather goes quiet. It is hours before it finally does so. The radio remains alive for communication and keeps checking to see if he is alive. Blind in the wind and the dark, he waits it out.

At 8 am the next morning, he is still in the same spot. Barely able to get out or see anything. Base Camp tells him it’s been too long, and he needs to begin his descent, but he decides not to. This puts him in grave danger. When he finally begins his descent, it is almost 24 hours later, and he cannot feel his legs. His situation is incredibly dire.

After thumping his chest and hitting his body to wake up, his peripheral neuropathy has completely frozen. Not able to stand or move, he pulls himself out of the crevice he dug for himself. He begins his descent. He is taken straight to the hospital. His leader has informed him that two climbers are coming up to meet him and collect him. At 11:00 pm, two fellow climbers meet him and pull him into a tent and try and revive his body. They warm some water and provide heat by rubbing his feet that are frost-bitten. They begin their descent shortly after, and at 2 pm the next day, the helicopter finds them.

There is a great receiving of him at the airport, and his wife gives him the biggest hug. He is finally home with his wife and children, and his heart cannot feel better. A medal is pinned on his chest to mark his victory and courage. He knows he’s done it. But a particular article in a published zine for climbers by his fellow climber Aleksander Lwow. It is finally revealed.

He never made the summit. He was 17 meters away from Broad Peak. But they wanted him to come back to them. Everyone knew. No one could tell him because he had to come back alive. He vowed never to do it again without a team. This was a nightmare he was not going to let go of so easily. He decides now it is all about his family, and he does exactly that.

The film’s handheld shots highlight how authentic climbing a mountain is. No matter how much experience you have, the mountain will strip everyone of their clothing. The wind pushing us keeps us and shifts our focus from the adversity Berkbeka had to endure. Still, shots are usually something that would make the viewer feel far more uncomfortable. Characters in this movie pop off the screen, making it immensely heartfelt to watch.

With a dewy and blue tone in each frame, the screen feels cold. The Storyline is broken up into segments where we experience the character’s struggle up close, and it is simply uncomfortable to watch because we can’t imagine going through the same thing. Director Leszek Dawid, with writer Lukasz Ludkowski, brings to the table a film worth remembering as this character’s tenacity only shines more with the time that passes. Sometimes, when time heals, lessons learned can help achieve the impossible. It is only luck that decides what the outcome shall be.

Can Maciej Berbeka return home to tell the story of summiting Broad Peak?

Berbeka takes the opportunity he has to take in his wife and kids’ presence. They are everything to him; therefore, he stays involved in their lives and watches them grow up. He is now a man of the moment. He admits that, with the mountain looming in his nightmares, he prefers to stay with his family and savor every second. Years pass after learning that he was unsuccessful in reaching the pinnacle, but he concedes that he will be whomever he chooses to be at this very moment. Even though it is hard and he feels completely left out of the environment around him, he breathes clean air, and he is grateful.

One day, at a petrol pump, Berbeka gets a call. 25 years later. Kyrzsiek Wielicki is calling him to tell him it’s time to embrace the Karakorum again. This time, it’s a younger team, and they will provide guidance. After lingering thoughts and unsure feelings, he finally embraces the idea that he wants this. He can’t completely let go of what is left behind on the mountain. He knows he has something to return to. Every night he tosses around wondering what the next move is. But he finally tells his wife he will do it.

Termed the Leader of Winter expeditions and the best guide for High-Altitude climbing, things come together this time with technology and better muscle to accompany them. Standing tall with the title of being part of the Polish Alpinism Sport, he embraces another journey to conquer the Karakorum the right way this time.

Berbeka and his friend move up the mountain with three other young climbers. They face some tough bits, but it is not as harsh as it was years ago. To some level of success, they move up close to Rocky Summit. Things begin to get a little scary as the leader from base camp checks to see if all is in place. They decide to move up but are delayed by three hours. The weather is close to worsening, but Berbeka must make the summit. When he finally does, it is 6 pm. On March 6th, 2013, Marciej Berbeka made the summit and conquered Karakoma.

Triumphant, at this moment, now begins the descent. Suddenly, something changes. The leader of the camp keeps asking on the radio where he is. With radio silence for over 24 hours and Maciej Berbeka and Tomasz Kowalski’s last known location unknown, they were suddenly missing because they never reached Camp 4. On March 7th, the head of the expedition Krzysztof Wielicki, said there are “no chances at all” of finding alive 58-year-old Maciej Berbeka and 27-year-old Tomasz Kowalski. He never returned home. The next day, both climbers were declared dead, and the expedition was called to a close. His soul was finally one with the Karakorum.

Sometimes it is challenging to understand how a mountain climber could be so courageous as to believe that the mountain would spare a measly human, and some have come back to tell us how it can be done. On the same account, contrarily, we have seen the ability of Nirmal Purja to climb Mount Everest six times, and the other 13 summits have one wondering what the man consumes or drinks to enable him to perform such seemingly impossible feats.

The film provides a heartfelt account of what a high-altitude mountain climber’s trek to the top of a mountain is like, albeit Berbeka’s accomplishment is nowhere like Purja’s. If you could touch clouds, what would you do? Would you think of yourself as superhuman? If so, would you want your children to possess this superpower?

Hold Your Breath: The Ice Dive [2022] Netflix Review: A Stunningly-shot Documentary About A Freediver

Where to watch Broad Peak

The Best Voice-Overs in Animated Films

Do Revenge (2022) Netflix Review: A Hitchcockian reworking of the teenage school-girl trope that doesn’t always hit the highs