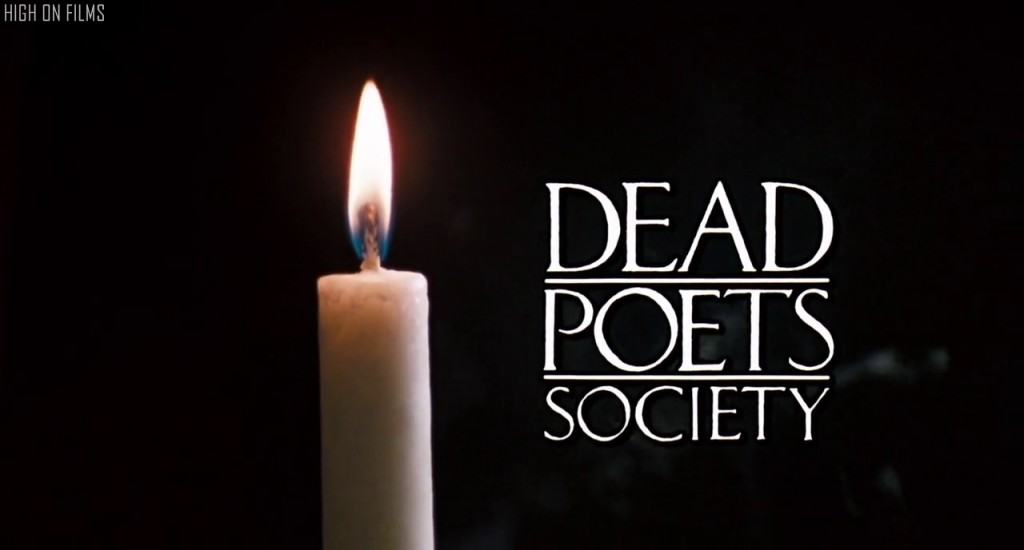 Dead Poets Society is yet another of my favorite films. When I watched it, I remember chiding myself for having deferred watching it for so long. I wished some teacher had told us about the movie in school. I felt like someone should have inspired me and kindled the passion for poetry in the same manner as is shown in the movie. But as they say, every cloud has a silver lining. I watched it when I had turned to teaching as a profession. Teaching English that too! The movie thus, undoubtedly, struck a deep chord.

For me, the tone was set right in the beginning. The convent school atmosphere – bagpipes in the opening scene, school auditorium, dormitories, emphasis on discipline and rigorous academics – instantly reminded me of my school St. Joseph’s Convent. I had a feeling that I would love the movie.

Directed by Peter Weir, the movie is based on the theme of Carpe Diem (Seize The Day). Professor John Keating (Robin Williams) returns to his alma mater – the old-fashioned, aristocratic, highly regarded all boys-boarding school ‘Welton Academy’– to teach English. 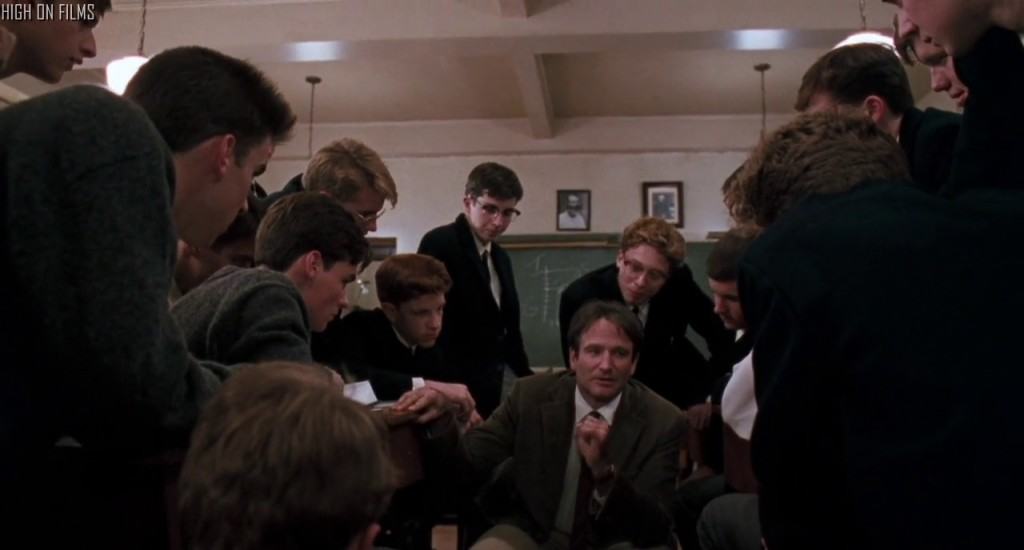 In his introductory class, he takes the students out into the hallway and asks them to ‘peruse the faces of students from the past years’. In an effort to drive home the point of Carpe Diem, he says, “They’re not that different from you, are they? Same haircuts. Full of hormones, just like you. Invincible, just like you feel. The world is their oyster. They believe they’re destined for great things, just like many of you, their eyes are full of hope, just like you. Did they wait until it was too late to make from their lives even one iota of what they were capable? Because you see gentlemen, these boys are now fertilizing daffodils. But if you listen real close, you can hear them whisper their legacy to you. Go on, lean in. Listen, you hear it? – – Carpe – – hear it? – – Carpe, carpe diem, seize the day boys, make your lives extraordinary.”

Keating’s teaching methods are avant-garde and his ideas do not conform to Welton’s established rules and traditions. He teaches poetry in a very unconventional manner and inspires his students to think for themselves. For instance, unhappy with the technical and methodical analysis of poetry by J. Evans Pritchard in the introduction of the poetry textbook, he asks the students to rip out the entire introduction. The students are astonished and hesitate to do so. He then tells them, “It’s not the Bible, you’re not gonna go to Hell for this.”

Keating wants the students to believe in themselves and their dreams. The movie is about these students who are grappling with teenage anxieties in general and their own problems in particular. Neil Perry (Robert Sean Leonard) is vivacious, outgoing and realizes that acting is his calling. (I like Neil’s expression of joy – giggling and stamping his feet – on having got the part of Puck. Such childlike enthusiasm!) However, he has no say in front of his authoritarian father who wants him to study medicine for all practical purposes. This is the story of so many children even today. Parents pushing their child in a direction they deem fit regardless of the child’s wishes, dreams, and aspirations. An absolute contrast is Todd Anderson (Ethan Hawke), the shy observer who is scared of expression. His elder brother was a Welton valedictorian and hence both his parents and the school have great expectations from him. Yet another common scenario where a child is bogged down by undue pressure!

Knox Overstreet (Josh Charles) epitomizes the ‘intensely in love’ youth and makes all effort to woo his lady love. Charlie Dalton (Gale Hansen) is the quintessential rebel who believes in living on the edge. He tries to pull off the ‘phone call from God’ stunt in the end but even Keating reproaches him. The other three characters who are integral to the story are the academically gifted Steven Meeks (Allelon Ruggiero), traditionalist Richard Cameron (Dylan Kussman) and Gerard Pitts (James Waterston).

Inspired by Keating’s lessons, these students revive the Dead Poets Society of which Keating himself was a member during his schooldays; a secret literary society which according to Keating “was dedicated to sucking the marrow out of life.” He explains further, “And, believe me, we did not simply read. We let it drip from our tongues like honey. Women swooned, spirits soared… Gods were created, gentlemen!” The students conduct their meetings in a cave in the woods.

The story proceeds seamlessly while the plot moves forward. Keating’s unorthodox teaching methods do not go down well with the authorities. A dramatic scenario gives the headmaster Mr. Gale Nolan (Norman Lloyd) a chance to question Keating and his ways. Saying beyond this would be giving away the entire plot and I for sure don’t intend to do that. 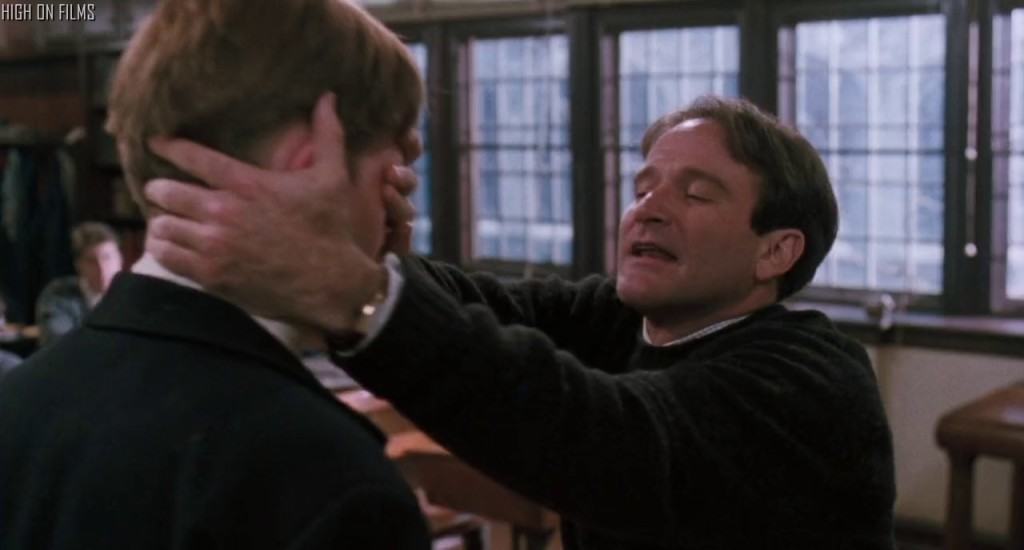 Talking about performances, it is always a treat to watch Robin Williams! This is one of his finest performances. The tenderness, passion, and humor in his character make us all wish we had a teacher like him. All the students are excellent in their roles. I especially liked the demure and introvert Ethan Hawke. I first watched him in Before Sunrise and I loved the movie and him. But such a mature performance at a young age; he really has the depth in his acting.

Dead Poets Society has many beautiful moments and wonderfully captured shots. Two scenes are particularly visually appealing. One is when Knox Overstreet rides his bike down the hill, scattering a flock of geese which fly up into the amber sunset. The other is the soccer game where after scoring the winning goal the students hoist Mr. Keating onto their shoulders. The backdrop is of the red sunset against the trees. Both these scenes are picturesque and a photographer’s delight! The last scene where students stand on their desk as a mark of love and respect for Keating is my favorite. The cave scenes are also wonderfully done. Maurice-Alexis Jarre’s soundtrack in the film is soothing and melodious. I have always been a fan of the Scottish highland bagpipes and they have been used so beautifully.

The movie also has some remarkable dialogues and I have mentioned some in the course of the review. There are so many other encouraging lines from Keating that continue to hold true even today. An example is when he says, “Boys, you must strive to find your own voice. Because the longer you wait to begin, the less likely you are to find it at all. Thoreau said, “Most men lead lives of quiet desperation.” Don’t be resigned to that. Break out!” How I agree with him!

About the theme, I myself believe in Carpe Diem. In fact, this belief led me to start Strip Off Slumber – a platform to encourage people to live their dreams. It pains me when I see people slogging and leading a mechanical life. While a majority have reconciled themselves and are content with it, there still are many who are unhappy. The movie encourages young minds to have a mind of their own but this is universal and applies to everyone. 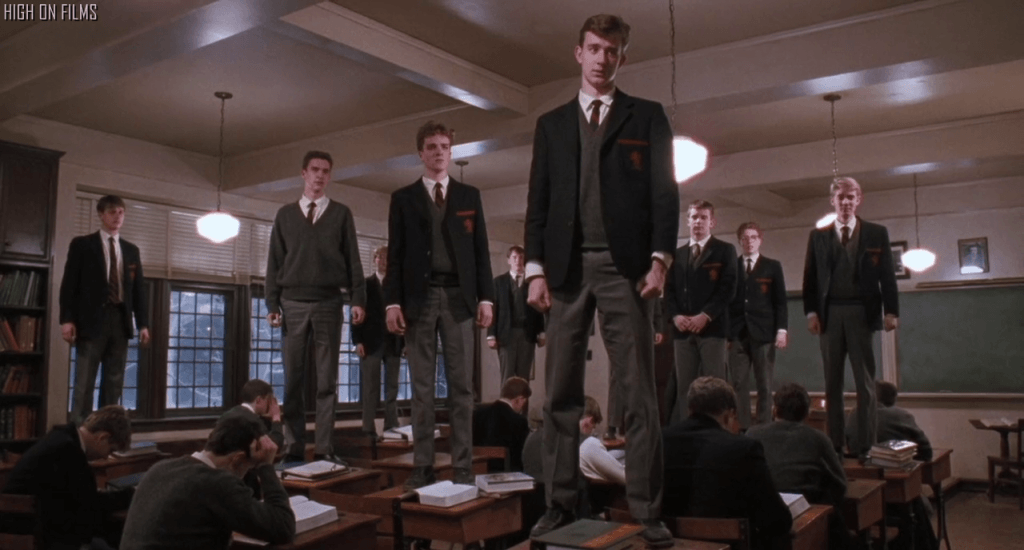 The film was nominated for four Academy Awards. Tom Schulman wrote the script based on his life at the Montgomery Bell Academy in Nashville, Tennessee and won a deserved “Best Screenplay” Oscar. Robin Williams was nominated for the “Best Actor in a Leading Role” but lost out to Daniel Day-Lewis for the latter’s spectacular performance as Christy Brown in My Left Foot. The movie though ought to have won the Oscar for “Best Picture” but the ways of the Academy Awards are mostly out of my comprehension. So never mind that! Peter Weir’s was the fourth nomination for “Best Director”. After watching this and The Truman Show, I am very keen on exploring his other works.

To sum up, Dead Poets Society is an inspirational, moving drama which raises pertinent questions about our approach towards education and life in general. It is a fitting tribute to the profession of teaching. It reminded me of Mona Lisa Smile, another all-time favorite, in more ways than one. Though under-rated (latter even more so), both these movies will continue to be my favorites. It surely inspires me to invoke the passion for poetry and literature in my students. Not that I hadn’t been doing it, but it just drives that zeal further.

Rakhi has a passion for varied arts – cinema, music, photography, books to name a few. She believes that one should follow one’s heart and passion. She herself does a little bit of everything.